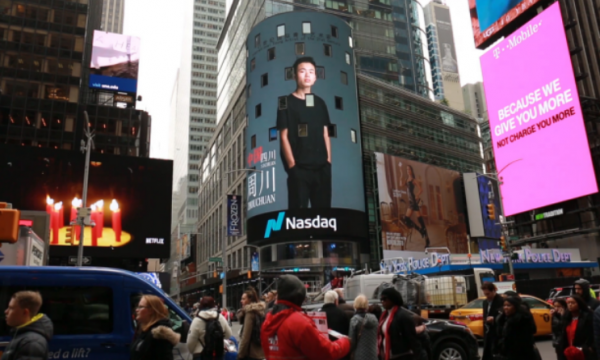 On October 25, 2018, 11.50 U.S. time, international young artist Zhou Chuan appeared on the screen of Manhattan Times Square as the youngest Chinese artist in the world in 2018.

International Young Artist “Zhou Chuan” is 19 years old. His birthday is April 1999. He was born in Deyang, Sichuan Province, China. He appeared on the screen of Manhattan Times Square in New York City in 2018 as the world’s youngest Chinese artist with the talent of self-study. His works were selected for the 58th Venice Biennale in Italy. His works have been collected by famous collectors and Hollywood film stars at home and abroad. Recently, he has participated in the International Invitational Exhibition of Contemporary Art, Paris (France), Contemporary China and Paris Art Exhibition, etc.

Times Square is a busy street in Manhattan, New York City, the United States, known as the “crossroads of the world,” the screen is located in Manhattan, New York City, the world’s most crowded business circle, is also the commanding heights of global financial attention; the center of the Nasdaq advertising screen is known as the “four global yellow” One of the gold advertisements is called “the first screen in the world”. It is recognized by the American people as the capital of the world. Chinese artist”Zhou Chuan”has been honored as an international young artist in the 21st century. He has become the focus of the world, the pride of Chinese artists, and he has successfully stepped onto the stage of international art.