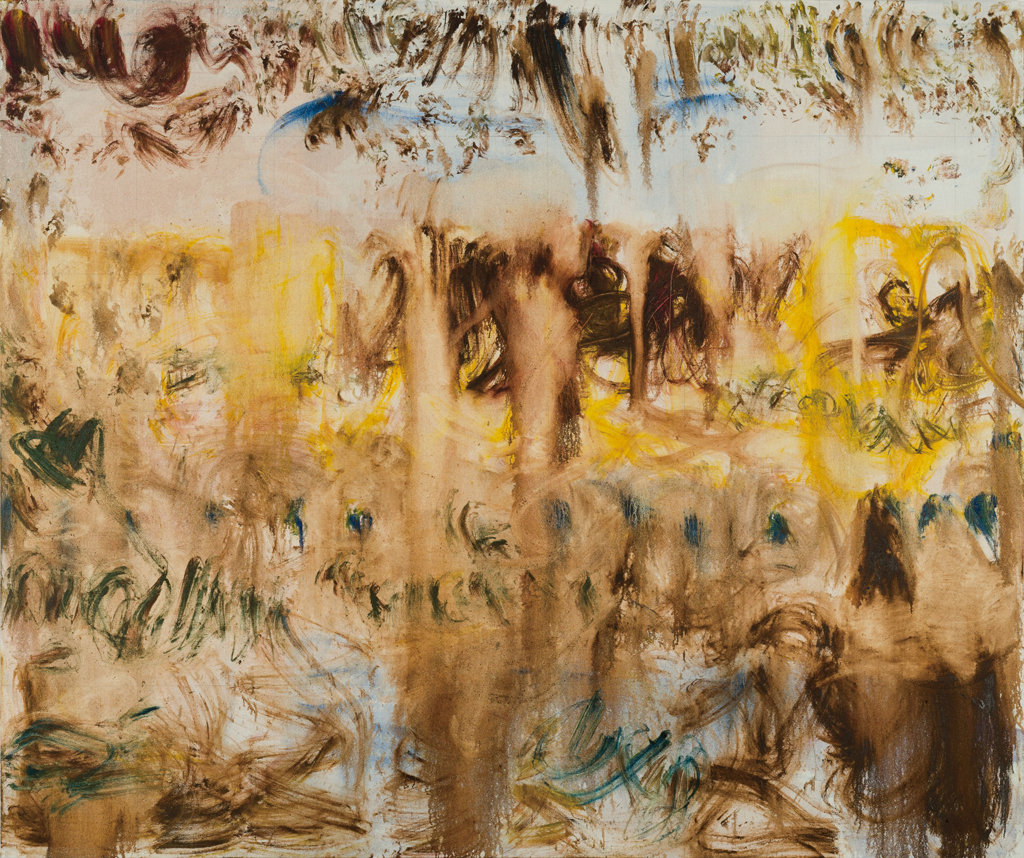 Capturing banal moments in urban settings, the Shanghai-based painter Zhang Enli has made moody compositions of such mundane objects as an empty cardboard box, a row of paint cans on his studio floor, and a loopy water hose hanging in space. Zhang has refined this idiosyncratic vocabulary slowly, and distinguished himself in a crowded field of Chinese painters while earning exhibitions at the Museum of Contemporary Art Taipei, the K11 Art Foundation in Hong Kong, the Museo d’Arte Contemporanea di Villa Croce in Genova, Italy, and the Institute of Contemporary Arts in London.

Zhang’s iconography is, in a word, well-established, so it was a bit of a shock to walk into his latest exhibition at Hauser & Wirth in New York and encounter new paintings all made in 2017 that were total abstractions. In one titled The Skeleton, with its brooding tangle of coil-like lines, you could spot a glimmer of the pipes and hoses typical of his work. But in others, particularly The Monochrome, Night (1) and (2), there was no discernible subject matter, just brushstrokes in clusters of blues, greens, and gold. There is a suite of five paintings, all titled The Garden, overtly inspired by Monet’s studies of Giverny but missing the particulars of leaves, trees, or flowers. In most of these canvases, paint is applied and then rubbed off, leaving erasure marks and cloudy patches that the artist says instills a sense of “deep ambiguity.”

“People have presumptions about representation, but I feel like these are a different form of representation of the world,” Zhang said, bemused that these new works might cause a sense of confusion. A soft-spoken man with a clean-shaven head and a bit of white beard, he is 53 and has not shown in New York since 2011. Since then he has given a lot of thought to how he wants to approach painting, and he is unafraid to confound viewers’ expectations. “My understanding of the world is not to take it as it is, but to question how we come to this understanding,” he said.

Born in Jilin, China, in 1965, Zhang attended the Arts & Design Institute of Wuxi Technical University, graduating in 1989. He taught himself painting, learning about Western masters from books and catalogues. His first encounter with Western painting was an exhibition of the work of Edvard Munch at the Shanghai Museum in 2000. Since then, he has of course traveled and studied art widely, but when asked which abstract artists he admires, he denies having looked at much abstract art. “In the future, I hope when people talk about me, it’s not as an abstract painter, but that I came to abstraction through the study of very concrete objects,” Zhang said. “My method is that of extracting the quality of [a] thing and through that, be[ing] able to get rid of concrete forms.”

Zhang’s latest work comes as there has been a surge in the market for Chinese abstraction. As early as 2013, the Rubell Family Collection in Miami introduced a host of Chinese abstract painters to American audiences in an exhibition called “28 Chinese.” Since then, the auction houses have jumped on the bandwagon, with Christie’s singling out the works of abstractionists Ding Yi and Wang Guangle among several others in promotion for its Hong Kong fall sale last September. In December, the Parkview Museum in Hong Kong, started by the late tycoon George Wong Kin-wah, said that it would concentrate solely on Chinese abstraction moving forward.

This trend comes just as more Western galleries are entering the Chinese art field. David Zwirner is opening a Hong Kong gallery next month, as is Hauser & Wirth, which also has offices in Beijing and Shanghai. Marc Payot, a partner with Hauser & Wirth, noted that the gallery has worked with Zhang for a decade, so this is no passing trend. “Because of cultural differences, it is sometimes difficult to know whether an artist is going to be important, but Zhang Enli painted his surroundings in almost a conceptual way,” he said. “Now, with abstraction, he paints with a freedom of expression that was evident in the earlier work, but in a much more restrained way.”

The roots of Zhang’s new abstract strategy, which made its debut at Hauser & Wirth in Zurich in 2016, may be found in the artist’s “Space Paintings,” environmental installations in which he covers the ceilings, floors, and walls of a gallery with abstract patterns that alter one’s sense of space. For example, in 2012, he created one of these immersive environment for the Kochi-Muziris Biennale in Kerala, India, using the bright colors of the Hindu festival of Holi as his chief inspiration. The next year, he created a more muted “Space Painting” at the ICA London, covering more than 9,000 square feet of the museum.

When making the “Space Paintings,” Zhang Enli rarely plans ahead or sketches out what will be the final fresco. Instead, working very much like a traditional scroll painter, he takes into account the overall expanse at a glance and works intuitively, section by section. Similarly, with the new abstract paintings, many of which stand over 8 feet tall, he begins at eye level, only later mounting a stool to reach the top of the canvas. Zhang applies the paint in sheer layers, rarely allowing the texture to build up, another similarity to Chinese classical painting. Beneath the hues, one can spot a grid drawn in pencil, a hallmark feature of this artist’s works since the early 1990s, when he used this device to transfer images from photographs. Now he works primarily from memory, attempting to capture the “essence of the thing that you might miss in the everyday,” he explained. “It’s not about relying on a photograph to paint, it’s about excavating forms from my memory.”