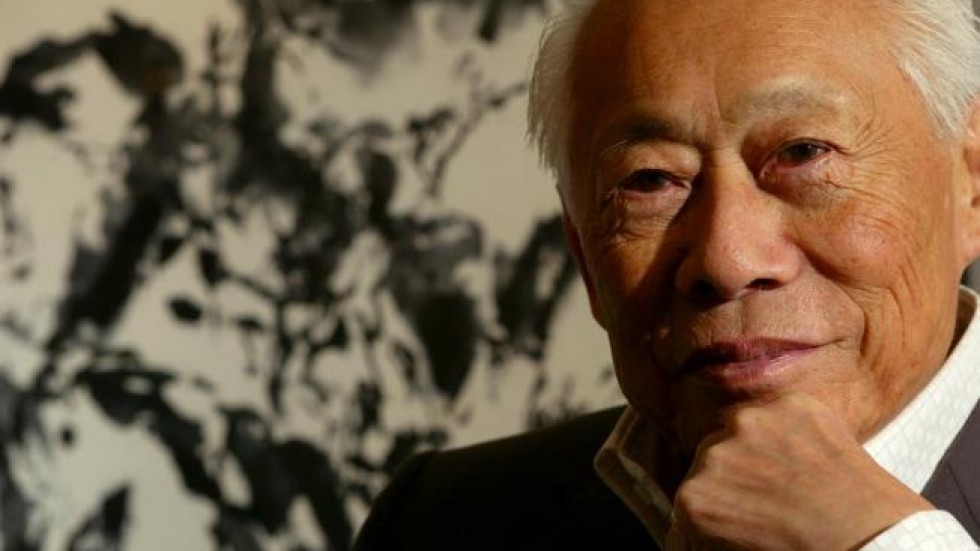 Zao Wou-ki could date the day his painterly life began in Europe. It was April 1, 1948. He had arrived in France that morning, after a 10-week voyage from Shanghai via Hong Kong (he liked to say he was the only passenger who didn’t succumb to seasickness) and by that afternoon he was at the Louvre, absorbing the light and colour of those European masters he’d only seen in postcards and magazines such as Life, Vogue and Harper’s Bazaar.

Zao’s path to artistic greatness was focused and, in pre-revolutionary China, privileged. He was the descendant of a Sung emperor and his grandfather, who bore the title xiucai that signified success in the rigorous Imperial examinations, taught the young Zao calligraphy for two hours every day.

His father was a banker and an amateur painter who had once won an artist’s prize in Panama, and who encouraged his son’s talent. While Zao’s mother thought that he should go into banking, his father – remarking that any bank which employed his son was likely to go bankrupt – made sure he was enrolled as an art student at the Hangzhou School of Fine Arts by the time he was 15, and provided generous funds for travel.

Many years later, reviewing his life in an interview conducted in the three languages he spoke – Shanghainese, French and English – Zao would say of his father, “He made me what I am today. I am his creation.”

When the elder Zao died in a Chinese hospital in 1968, at the height of the Cultural Revolution, he was a man disappointed in his country but not in his son.

On that sea voyage to France, Zao was accompanied by his first wife, Xie Jinglan, known as Lan-lan. She had studied music and Zao liked to tell the story of how, in Paris, they both visited an Italian singing master who thought that Zao showed the greater promise; although he declined this potential swerve in career, Western music, particularly Mozart, was a lifelong love. Lan-lan, unfortunately, was not. They divorced in 1957 and Lan-lan would also go on to become a well-regarded artist.

Although Zao was coy about analysing his technique – and, later in life, distinctly skittish in his response to earlier masterpieces, regarding them in the amused but tolerant way one might engage with an eccentric relative – a casual observer can easily track his departure from Chinese artistic tradition after he left China.

By the early 1950s, he’d moved into the realm of the abstract. He loved Paul Klee but was wary of simply exchanging one style for another.

“My painting became illegible,” he would say later. The child who’d once toiled every day over his calligraphy was now producing “imaginary, indecipherable writing” in an effort to distance himself from any language, or from any nation, that might confine him.

What brought him back to Chinese ink was the sickness of his second wife, the Guangdong actress Chen Meiqin, better known as May Choo. They’d met in Hong Kong when he was passing through after a visit to his brother in the United States; he is said to have been instantly smitten when he saw her in the play Sorrows of the Forbidden City.

They married in 1958 and he took her to Paris, where both of them were initially energised by their relationship. Zao rediscovered the vigour of his early days in Paris; Choo became a sculptor. But in the 1960s, she sank into depression and during her long illness, Zao began to lose the verve and energy demanded by his large oil canvases. On March 10, 1972, at the age of 41, Choo killed herself by taking a drug overdose.

A few weeks after her death, Zao – by now a French citizen – returned to China for the first time since he’d left it, 24 years earlier. When he was asked, decades later, why he’d decided to make a journey to his homeland at such a moment, he merely said that his mother was ill. But it gave him the distance he needed to stand back and evaluate the tragedy which had befallen him.

In September of that same year, when he returned to France, he painted En memorie de May (In memory of May), which can be seen at the Pompidou Centre in Paris. The massive (200cm x 525cm) canvas depicts a dark landscape lit by light and powerfully conveys both loss and the eternal existence of human optimism.

Perhaps that work, despite its title, says as much about Zao’s feelings towards China as his second wife. Certainly the 1972 trip renewed Zao’s relationship not only with his country but with its artistic traditions. He’d been using ink in the last years of Choo’s life, and the age-old technique, which he’d deliberately been avoiding, now soothed him. “As I spread out those stains,” he said later, “life became easier to live and the pleasure of those gestures prevailed on the traces of my memory.”

He was accompanied by his third wife, the curator Francoise Marquet, whom he’d married in 1977. Zao was not a man who could endure the single life: there was already enough solitariness in the studio. He had to have music on as he worked, he said, otherwise he was too lonely because “painting is like being a monk”.

In his later years, especially after a back operation in the mid-1990s, he was less capable of engaging, as he’d used to, with the canvases as they lay on the floor. He had no assistants. “I paint for myself and I’m never satisfied,” he said in 2003.

Neither was Zao concerned what happened to his works when they left him. That a diptych, 10.03.83, sold at Sotheby’s in Hong Kong last week for HK$37 million would have been of little interest even if he’d been well enough to be given the news.

His painting life had ceased several years before his death. Last year, Zao’s son by his first marriage, Zao Jia-ling, went to the French legal system with accusations concerning Francoise Marquet and the control of his works.

The issue touched on Zao’s mental abilities but the court couldn’t rule on the mental capacity of a non-resident: in 2011, Zao had been moved from France to Switzerland, to a house on the shores of Lake Geneva from where he could see Mont Blanc. The mountains and the water, apparently, reminded him of the China he’d left long ago.