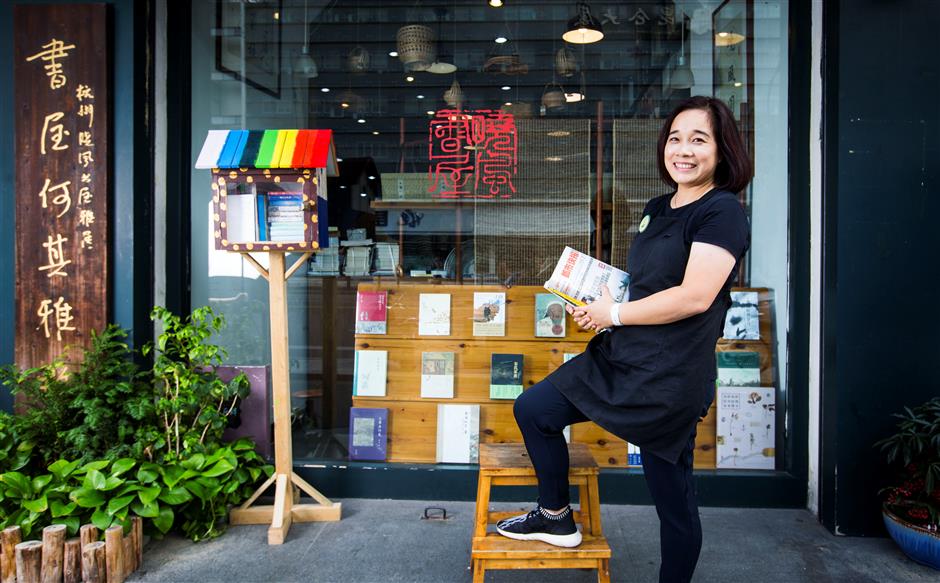 Everything seems soft here: the color of the tablecloth, the light, the Christmas decorations on the window, and the music coming out of a tiny retro-style radio, which is a stark contrast with everything else outside. It is a bookstore inside a hospital building.

This is Xiaofeng Bookstore’s 15th location in Hangzhou. Since its establishment in 1996, it has become a cultural landmark linked to people’s never-ending aspiration for knowledge, art and intellectual pleasure.

In 1993, Zhu Yufang, Xiaofeng’s founder, was working at Hangzhou Sanlian Bookstore near West Lake. Sanlian is known for its books on art and philosophy.

“At that time books were kept behind glass, where the shop assistant stood inside and the customers browsed from the outside. There were no open shelves,” said Zhu.

If you wanted to read a certain book, you would have to ask the assistant to fetch it either from the glass cases or from the bookshelves behind. But experienced readers knew how to get round the problem.

Cai Zhaoyang, then a student at Hangzhou Normal College, called the Sanlian Bookstore “a place of enlightenment.” In an online post, he recalled how he got acquainted with the shop assistant, and stayed reading behind the counter for a couple of hours.

A few hundred meters across the street were the Zhejiang Foreign Languages Bookstore, which sold books in their original languages, and the Modern Bookstore, boasting many classic works of literature.

At a time when the country was just starting to open up, these places were an excellent source for young people to catch up with the world outside, which both the students and their teachers had missed in the past years of stagnation.

Zhu remembers when they received from Beijing’s Commercial Press the first edition of a series of the “Translated World Academic Classics.” The series covered a wide range of subjects, from Aristotle’s “Metaphysics,” Plato’s “The Republic,” to Jean-Jacques Rousseau’s “The Social Contract,” Sigmund Freud’s “A General Introduction to Psychoanalysis” and Charles Darwin’s “On the Origin of Species.”

“We never expected them to be so popular among readers. The series sold out quickly and latecomers had to reserve with us,” Zhu recalled.

Three years working at Sanlian taught Zhu every aspect of maintaining a bookstore. When she opened her own on Baochu Road, she kept the same standard, especially in the selection of books.

One night after the store was opened for a year, a middle-aged man came in and asked for several rare art and historical books. When he got affirmative answers, he looked around the less-than-25-square-meter store in recognition.

By the time Xiaofeng moved to its present location on Tiyuchang Road in 1999, the bookstore business was thriving in the area.

“From Baochu Road to Shuguang Road and Tiyuchang Road, there was a law bookstore, an architecture bookstore, an education bookstore and two discount bookstores. That was the golden era of bookstores,” Zhu told Shanghai Daily. 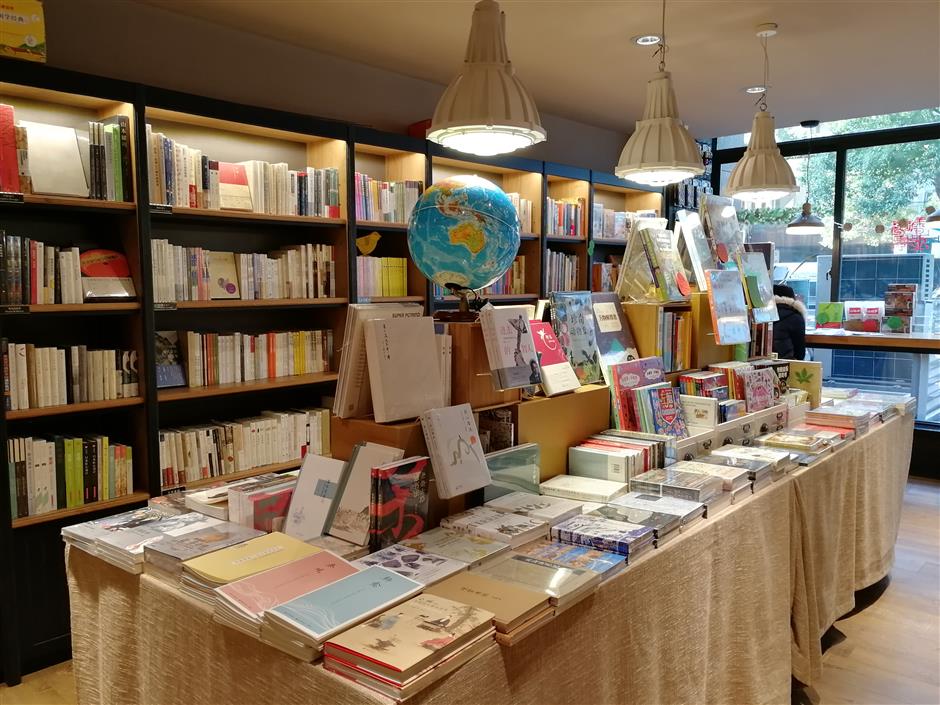 Xiaofeng’s Bookstore at the No. 1 Hospital Affiliated to Zhejiang University School of Medicine

Some of the earliest and most frequent Xiaofeng customers also became bookstore owners later. In 2002, Yang Xiaohai opened Tielu Bookstore in west Hangzhou with funds earned from his job at an information technology company after graduating from the then Hangzhou University.

But the sweep of the Internet came faster than most people had thought. Online bookstores such as Dangdang.com and Joyo.com came into being around the millennium.

In 2006, the iconic Sanlian Bookstore was closed down after moving from West Lake to Hangda Road. Yang shut down his Tielu Bookstore in 2011 after being in deficit for more than eight years.

A report published in 2012 showed book sales in decline.

“Readers started to complain about our prices. They questioned why we could not offer the same discount as those e-stores. That really lowered the morale of our employees,” said Zhu.

“What they did not know was that these Internet companies were subsidizing the bookselling business greatly with profits earned from other businesses.”

In 2012, the Hangzhou government launched the first supportive policy in the country to offer a yearly fund of up to 3 million yuan to privately owned bookstores in the city. In 2014, Hangzhou became one of the 12 pilot cities to receive tax exemptions for bookstores operating in wholesaling and retailing businesses.

Xiaofeng survived, partly because of its strategy of diversification from the beginning. As early as 1999, Xiaofeng established its own wholesale center which now has over 300 outlets throughout Zhejiang Province. It has also developed its own derivative art products.

Since 2005, Xiaofeng has been opening multiple stores in carefully selected locations in Hangzhou. The stores in places such as Zhejiang Art Museum and China National Silk Museum feature books and products related to exhibitions. Stores at universities work as cultural salons for faculty and students.

Its latest location at the No. 1 Hospital Affiliated to Zhejiang University School of Medicine, opened in August 2018, is part of an effort to mark and celebrate local history and culture.

Its location used to be the residence of two wealthy brothers Ding Bing and Ding Shen, whose family library building and its collection more than 8,000 antique volumes still stands there beside the bookstore.

In the 1930s, influential cultural figures of the time including Confucius thinker Ma Yifu and artist Feng Zikai used to live nearby.

“For me this is not just a bookstore, it is more of a cultural space deeply rooted in its historical background lasting for more than 100 years,” Zhu said.

For the past 20 years, small proprietary bookstores have greatly diminished in the city either due to new urban planning or the influence of the Internet.

In recent years, a new type of private bookstore conglomerate is emerging, with hundreds of chain stores opening across the country, and a more stylish decor catering to the tastes of younger people.

Zhu said she was not afraid of competition.

“A city should be able to accommodate bookstores of different varieties. A more localized connection is what I want to highlight. The best bookstore in the future may lie in a most common community, alongside eateries, laundry stores and children’s playgrounds.” 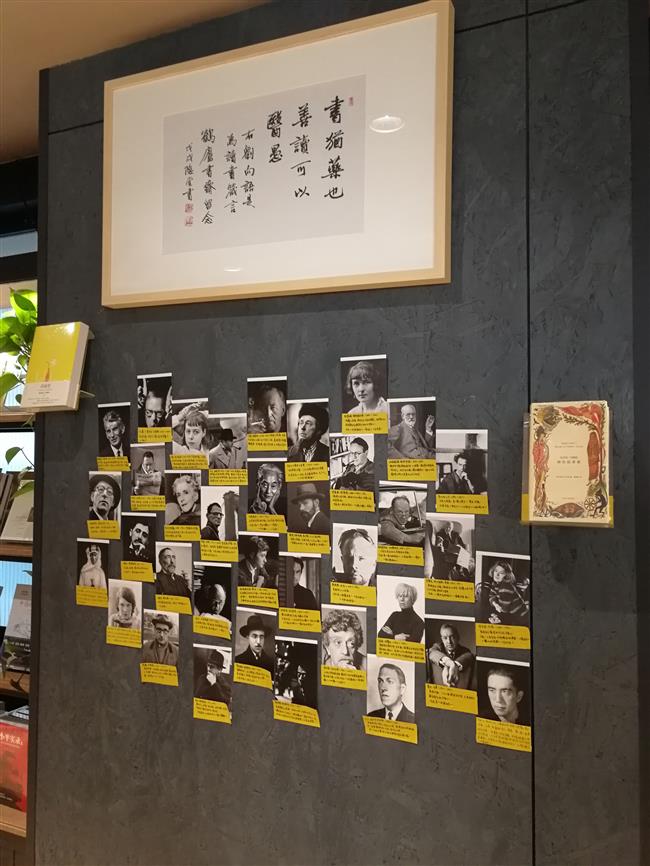 A wall inside Xiaofeng’s store, with calligraphy above which reads “Books are like medicine, which can rid you of foolishness if you’re a good reader.”