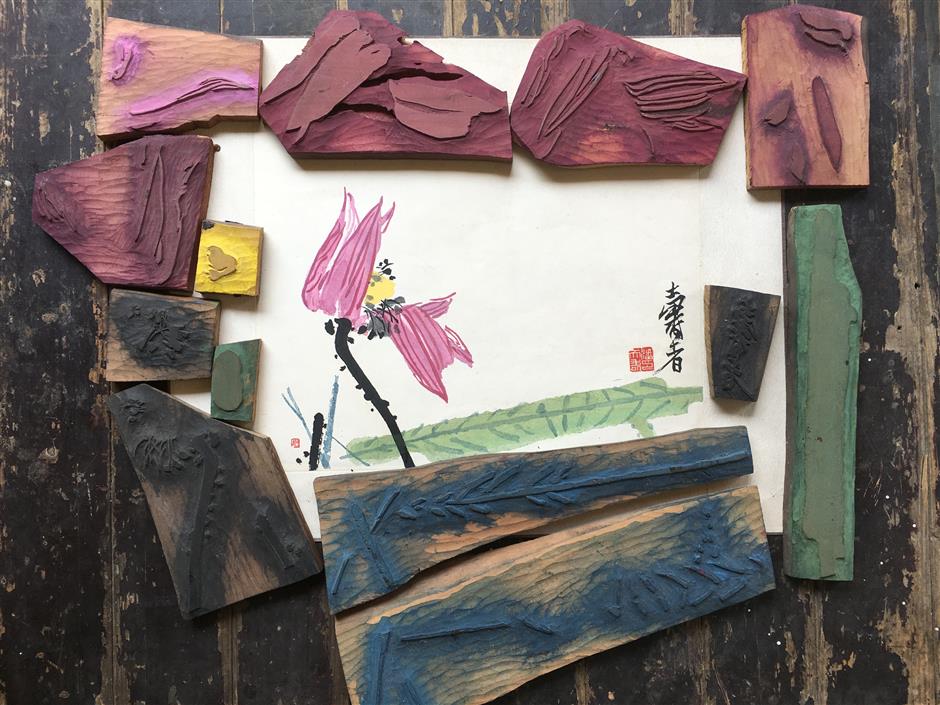 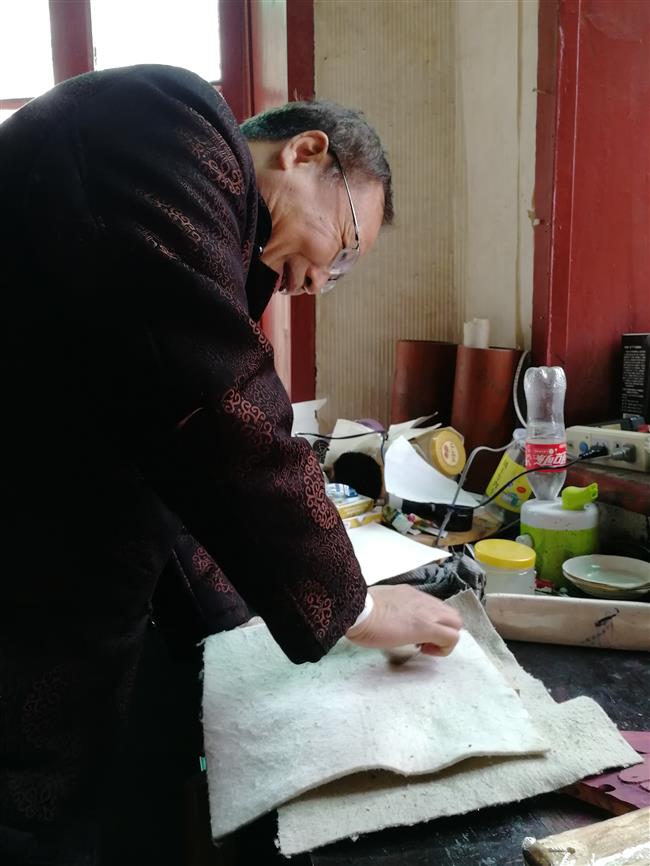 Huang Xiaojian makes a gonghua print on paper at his home.

A Hangzhou woodblock print master is keeping the ancient craft alive in a bid to preserve the historical art form for generations to come.

Woodblock artisan Huang Xiaojian began his career as an engraver at a printing factory in the former Zhejiang Academy of Fine Arts (now China Academy of Art). The factory may have closed in the early 1980s but it didn’t stop Huang trying to keep the fine tradition alive for perpetuity as an independent artist.

Huang cut himself off from the rest of the world to work in his studio at Baoshi Hill for four years, trying to craft and reproduce the gonghua (embossing) technique. He then spent a further three years experimenting with how gonghuaprints could be mounted in a traditional way as a single artwork and make it more accessible for ordinary people.

“Sometimes, it felt like you could put me anywhere in the world, even in prison,” Huang said. “It made no difference to me, I just did my work.”

In 2008, he first saw gonghua at an auction held by the Xiling Seal Art Society. It was included in the “Collection of Peking Letter-paper” (北平笺谱), published by Chinese writers Zheng Zhenduo and Lu Xun in 1934.

“I was pretty amazed by the sophistication of technique from our ancestors,” said Huang. The artist later learned from a foreign review that it represented the highest level of craftsmanship in ancient Chinese print history.

The first gonghua print was born out of competition in the 17th century. In order to attract more customers into local paper shops, Nanjing artists and craftspeople began to accentuate the texture and lines of a certain design by embossing on paper, which was usually the finishing touch on a woodblock color print. Back then the Chinese literati loved to write on the illustrated artisanal paper. The prints were not just added for aesthetic reasons, it catered to the content written to it.

When Huang came across it at the auction house, the skill has been lost for almost a century. Very few people had seen or even heard of it.

The artist could barely sleep for two days after witnessing the craft. He locked himself up in a studio and pondered how he could recreate this on xuan paper (rice paper).

He discovered that ancient artisans used a bone-shaped tool to impress images. Apart from that nothing else was known. After many failed attempts, he finally drew experience from Chinese stone rubbing.

He used a metal ball to roll over a mat, which was placed on top of the paper for protection. The metal ball was a kind of exercise ball commonly seen among Chinese elderly for practicing their fingers.

“It’s easier to handle, and works more efficiently. The most important thing is that you’ve made it, not how,” Huang told Shanghai Daily.

The late Ming Dynasty (1368-1644) publisher Hu Zhengyan was one of the first people to produce gonghua on paper. And it took him 26 years to produce and publish the “Ten Bamboo Studio Manual of Painting and Calligraphy” (十竹斋书画谱). 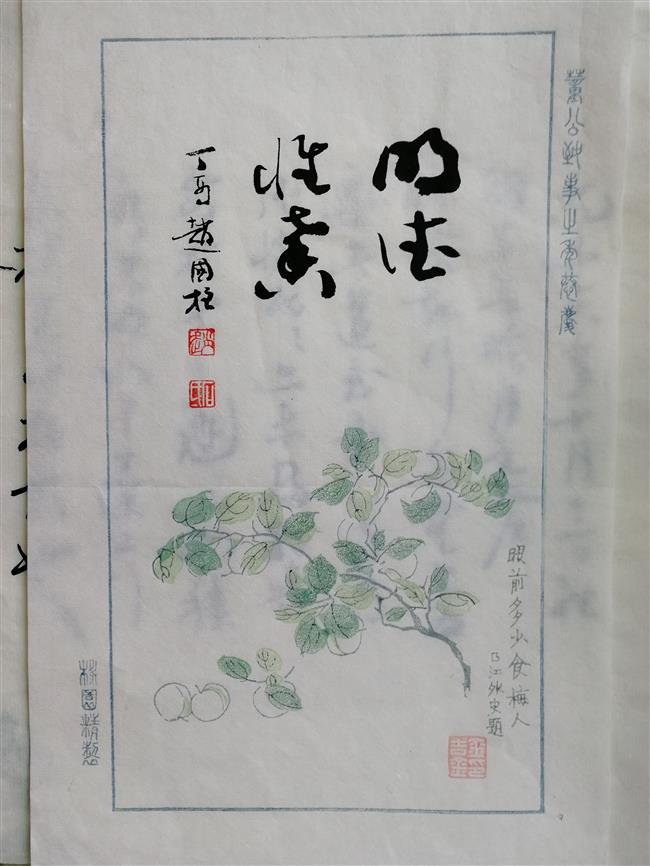 An illustrated letter-paper made by Huang Xiaojian has been added with inscriptions made by a calligrapher from Shanxi Province.

The book is an assortment of 320 prints, covering eight categories on calligraphy, ink-wash painting, fruit, birds’ feathers, orchids, bamboo, plums and rocks. It was then used as a primer for beginner artists to learn how to use the brush correctly and to imitate from the pictures.

All work was done in Hu’s Ten Bamboo Studio. He invited fellow artists to produce original paintings before handing them over to skilled craftspeople to complete the rest of the work. The book is mostly admired for its refined use of multi-block color printing, also known as douban (饾版).

Huang fully focused on reproducing the book and the techniques involved in 2008. For six years in a room less than 10 square meters, without any holidays or weekends, he toiled from 6am until late at night.

The process of producing a single color print sheet is painstakingly lengthy and requires a lot of hard work, especially as Huang worked both as an engraver and a printer.

He would begin by cutting pear wood panels into smaller blocks for carving. The types and gradations of colors on a painting determined the number of blocks.

Each block is carved in relief, with patterns corresponding to a certain color, for example, a green stem, a pink flower petal or the light green mountains in the background.

The block was then fixed to a table with plasticine attached to the back. Huang would further adjust its position until it precisely mirrored the contour drawing placed on top of it.

The most difficult part came from impression. The blocks must be placed just right so that patterns do not overlap each other. The artisan also needs to copy the expressive styles of traditional Chinese paintings, as the use of one brush may create a myriad of results on xuan paper in tonality and density.

“You should have a basic understanding of how people paint with brush,” said Huang. “Even with the same block, more cultivated people will have a better print than the less-cultivated.”

Understandably, the 66-year-old is worried about passing down his knowledge and skills to the next generation. Huang has a handful of apprentices, including his son, but none of them has managed to fully master the art as yet.

“I want more people to know about this art. But in the end I’m not a good story-teller. I’m just a craftsperson, who is working toward the level of an artist,” said Huang. 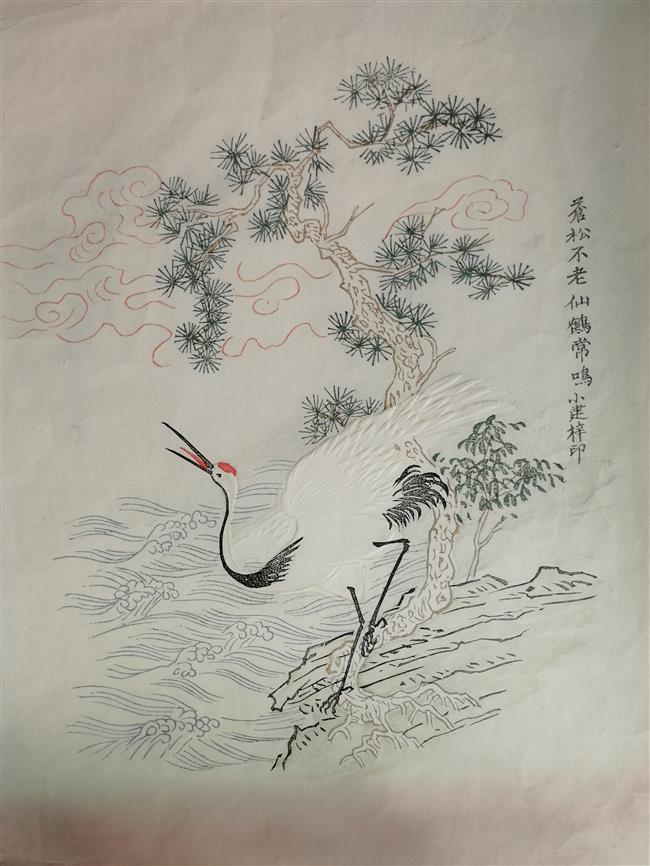 Gonghua highlights the feathers of the crane in a colored print.