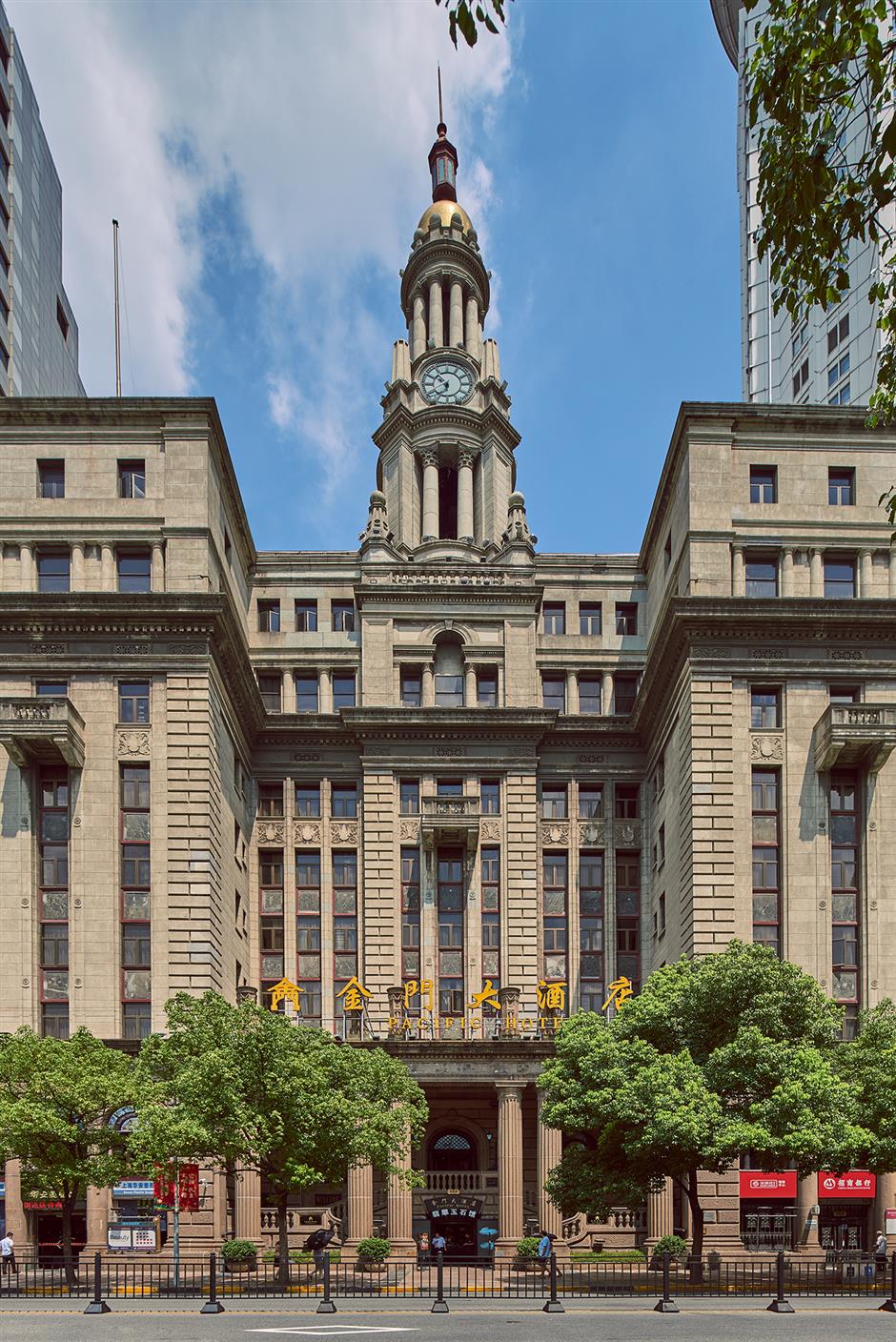 The China United Assurance building is living proof of a once successful Sino-foreign cooperation. Designed by American architect Elliott Hazzard, this stately Italian renaissance building was built in 1926 for a Chinese insurance company run on foreign lines.

“Among Shanghai’s galaxy of historical buildings, this is a rare example of a building devoted entirely to insurance. At that time, most insurance companies were operated by banks and located inside a banking house. Even Cornelius Vander Starr, founder of American Asiatic Underwriters and forerunner of AIG, rented an office in the North China Daily News building on the Bund instead of building a headquarter,” says Zhang Yaojun, a researcher from Shanghai Archives Bureau.

According to Zhang’s research, Lu had very humble beginnings, born into to a poor family in Chuansha, Pudong, and working for a foreign manager of China Mutual, a British life insurance company.

Amazed at his young servant’s self-taught English and his knowledge of insurance, the manager made Lu his assistant and later recommended him for a post at China Mutual.

“Owing to his remarkable performance, Lu was appointed as general manager to open the company’s Nanjing branch. In Nanjing, capital of Jiangsu Province, he made friends with powerful political figures who persuaded him to found China United Assurance Co Ltd in 1912, which was the first Chinese life insurance company organized with purely Chinese capital and run by Chinese,” Zhang says. 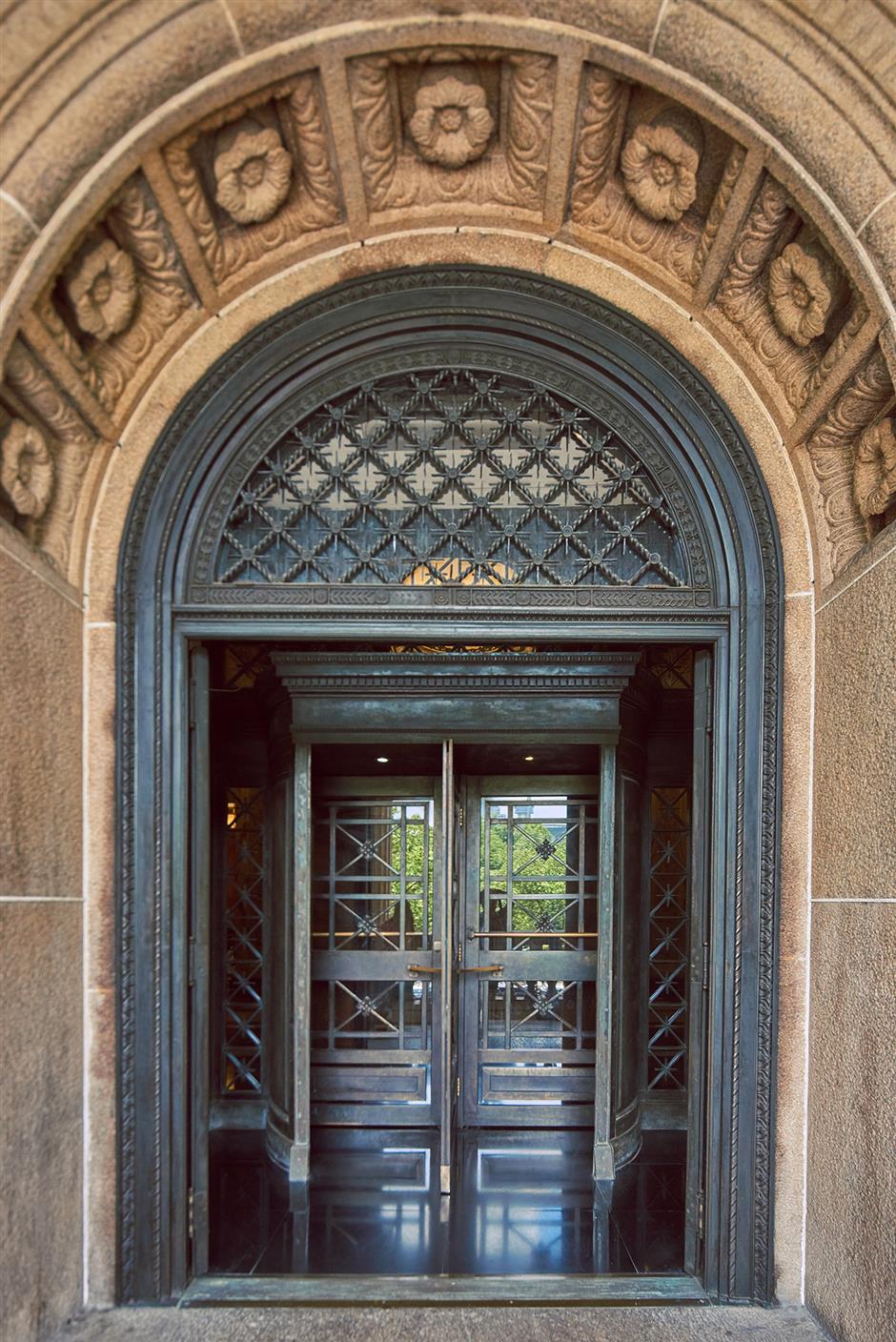 Because of his experience working in a foreign insurance company, Lu intended to run the company on foreign lines. He invited a few foreigners, including his former Canadian colleague, A.J. Hughes, to be the general manager and train Chinese staff. It was an experiment, but proved a success.

The company opened on July 1, 1912, at the Masonic Hall on the Bund, later moving to Nanjing Road. The company had been fortunate in their investments from the start, and around half their funds were in Shanghai real estate.

According to a report in the China Press, in 1923 the company purchased the present site opposite the former racecourse at Hughes’ suggestion, “although many critics thought it almost folly to locate a business so far out, and especially a wild idea to put up so great and fine a building on Bubbling Well Road.”

It was a smart investment as land prices along today’s Nanjing Road were soaring in the 1920s and early 1930s.

The building was a steel frame and reinforced concrete structure which was reviewed as “the choicest specimen of architecture in Shanghai” and “ranked with the first half dozen in attractive lines irrespective of cost.” 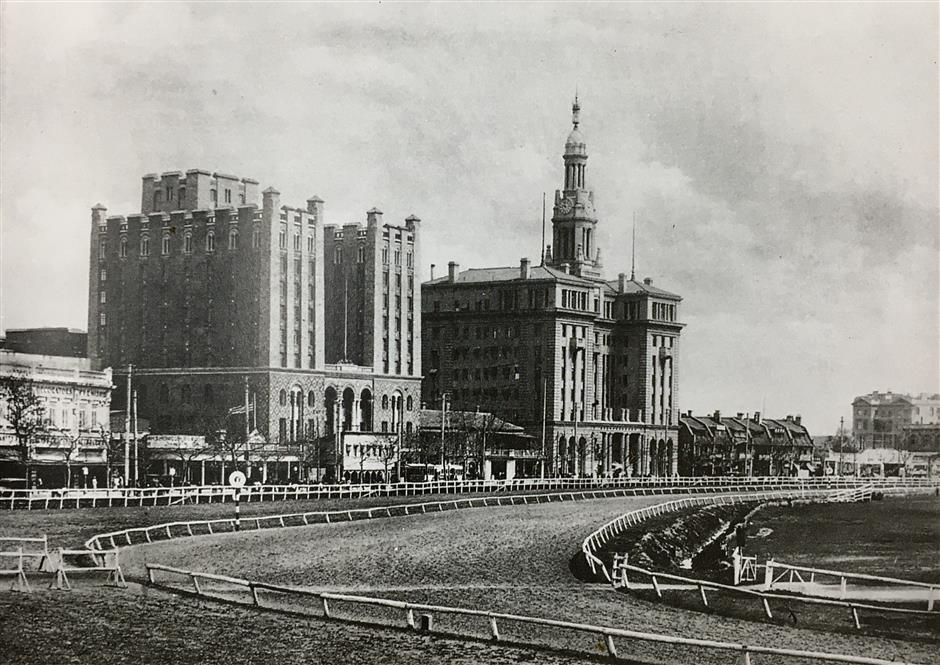 The China United Assurance building (right) and the adjacent Foreign YMCA building were both designed by Elliott Hazzard.

Architect Hazzard, who headed an influential architectural office in Shanghai in the late 1920s and early 1930s, designed three other buildings along Nanjing Road, including the Foreign YMCA building and the more modern Wing On Tower and Shanghai Power Company.

The China United Assurance building and the adjacent Foreign YMCA building had dominated the skyline of the former racecourse before the erection of the Park Hotel in 1934.

The nine-floor insurance building was surmounted by a clock tower crowned with a lantern at a height of 250 feet (76 meters). The first two floors are faced with granite with imposing effect. The other floors, with the appearance of plain stone, are in reality concrete.

The offices of Lu’s company occupied the first floor and there were two large vaults for books on the ground floor. The remainder of the ground floor was occupied by stores and shops, and all other floors had been furnished and served as apartments. China Press called it “probably the only life insurance company in the world running a furnished apartment building.” 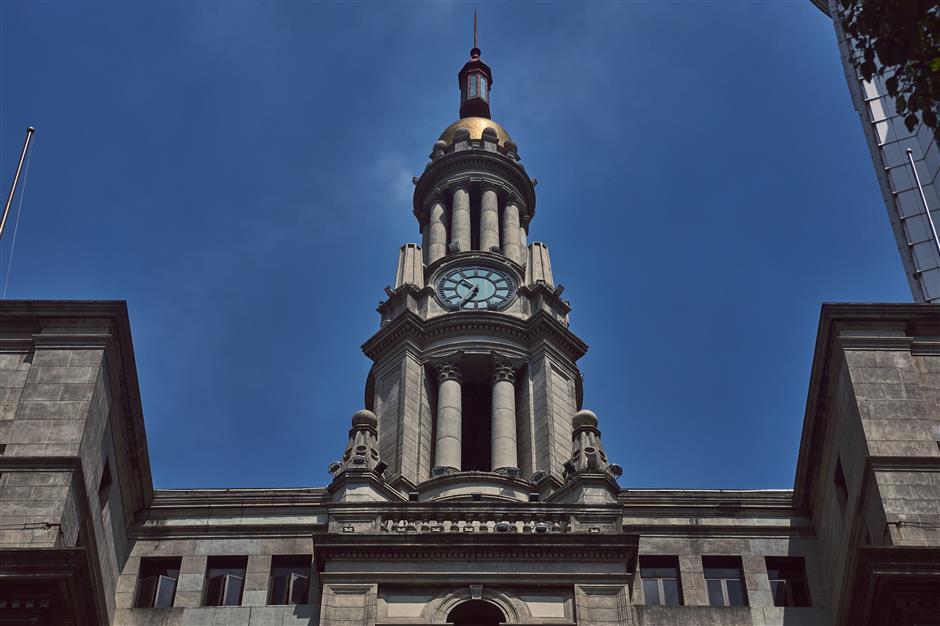 The clock tower is crowned with a lantern.

Its 1928 report said: “The offices on the first floor are finished in Italian marble and hardwoods, the boardroom and the manager’s room in teak. The apartments are also beautifully finished and luxuriously furnished, and the height above ground gives a constant pure, cool breeze in summer. The management of the building itself is in the hands of Mrs M. Stadtmann, who also runs the dining room, making all purchases herself at the market before 6:30am. She superintends the cooking and in general sees to it that perfect meals are served and perfect service given.”

There were up to 68 apartments and a total of 145 rooms in the building. The restaurant served not only the 110 tenants of the apartments, but also guests from nearby. There was always a waiting list for the rooms and apartments in the building as “it was not easy to duplicate the quality of the food, convenience and fine appointments of the rooms anywhere in the Far East.”

The heyday of China United Assurance came to an end when the Japanese army invaded China in 1937. Their business all over the country almost came to a halt and branches were closing down. The company had to rent out the lobby and other floors to the Pacific Hotel, maintaining only the second floor as its office.

The Pacific Hotel Co Ltd was launched and invested by more than 100 Chinese entrepreneurs. The company was registered in Hong Kong in 1936, opened a Shanghai branch in 1937, rented the China United Assurance building in 1939 and opened the Pacific Hotel on December 30, 1940. 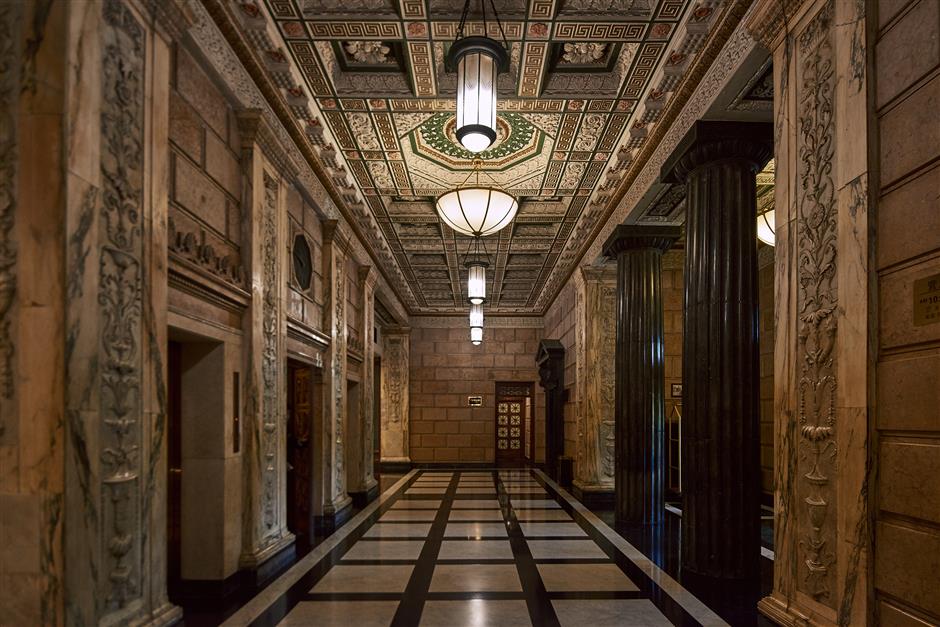 The well-preserved lobby is graced by exquisite marble columns and sculptures. 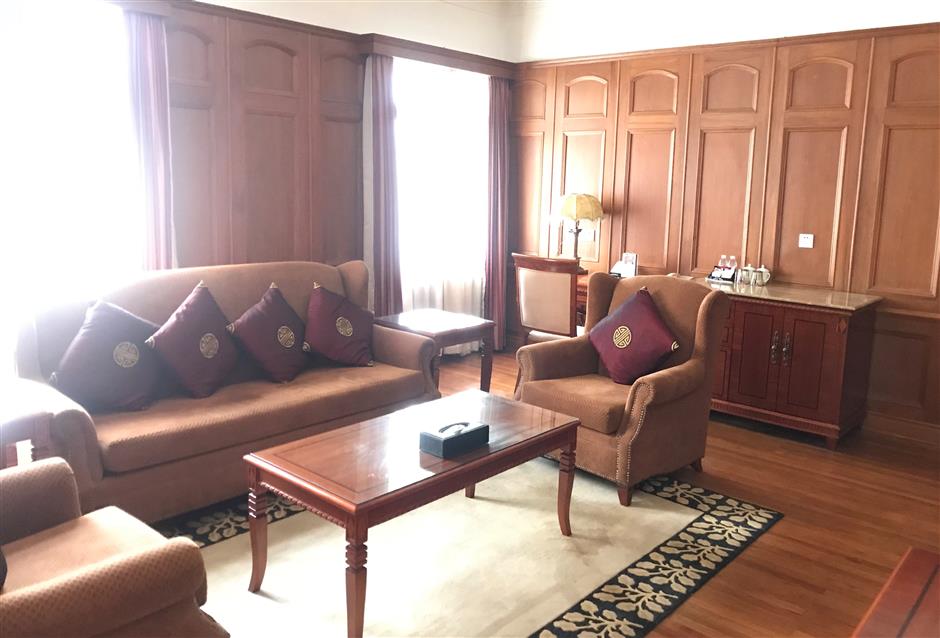 The sitting room of the suite was originally a well-furnitured apartment in the 1920s.

After 1949, the building was lent to the East China Textile Administration as its office. It was taken over by the Shanghai government after Lu died in Hong Kong in 1953 and since then reopened as the Huaqiao Hotel to host Chinese who returned from overseas. In 1992, the hotel reverted to its old name, the Pacific Hotel, to attract more overseas tourists.

“Now around 40 percent of our guests are foreigners, many of whom love the historical ambience and well-preserved architectural details,” says Ma Weixin, Party secretary of the Pacific Hotel which now belongs to the Shanghai Jin Jiang International Hotels (Group) Ltd. He says the hotel is planning a renovation.

Last year, the then Shanghai Party Secretary Han Zheng gave a speech to call on more Shanghai historical buildings to be “readable” and more streets “nice for walking.”

“To match this idea, the hotel transformed the former business center on the ground floor into an exhibition room of history. We searched the hotel’s architectural history from Shanghai Archives Bureau and other sources,” Ma says.

The exhibition room sits in a quiet corner of the hotel’s lobby graced by tall marble columns and exquisite sculptures.

The room is not big, but precious old photos and silver tableware showcase the history of a fine building built by a Chinese insurance company that is well worth a read. 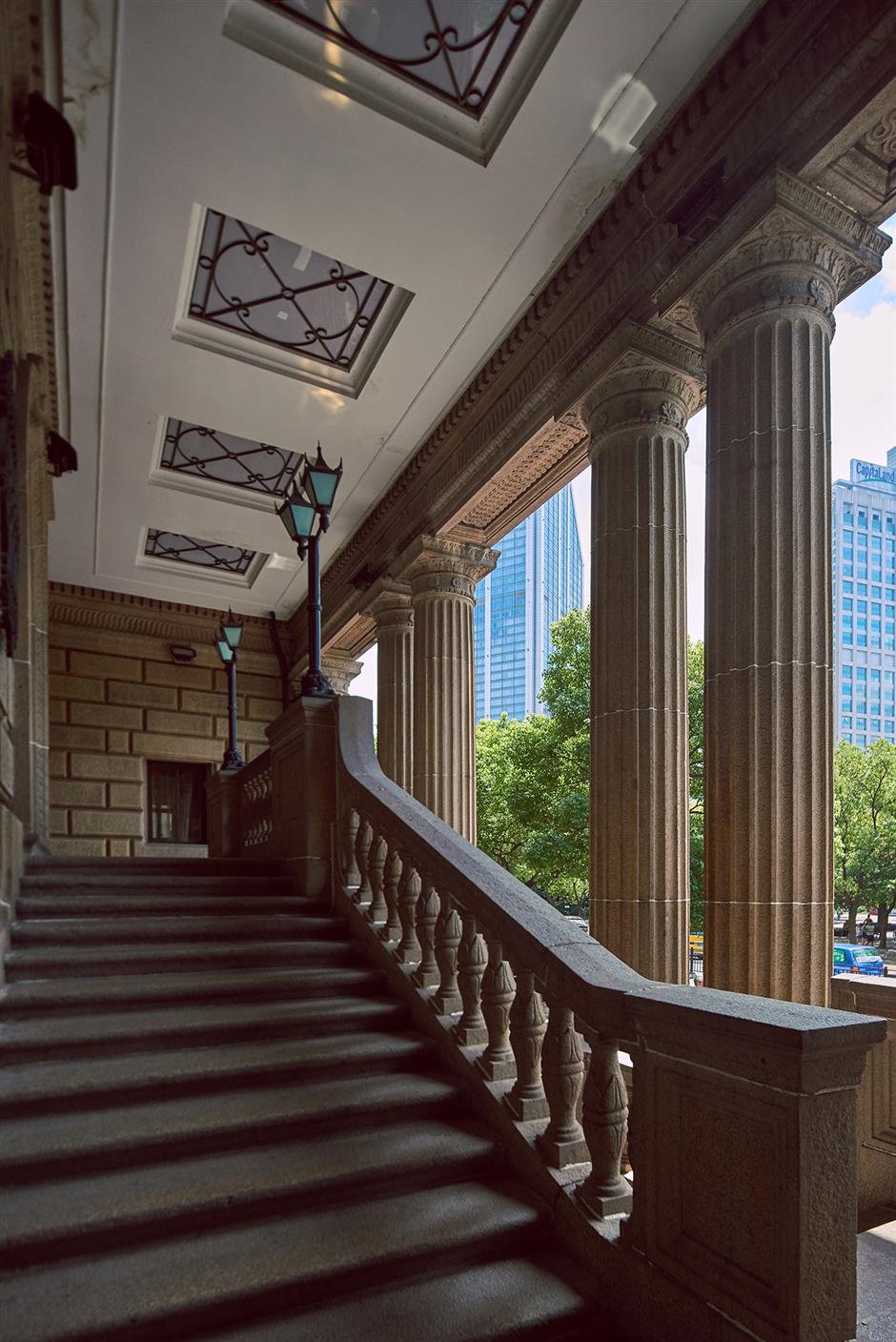 A grand stone staircase leads to the entrance of the hotel. 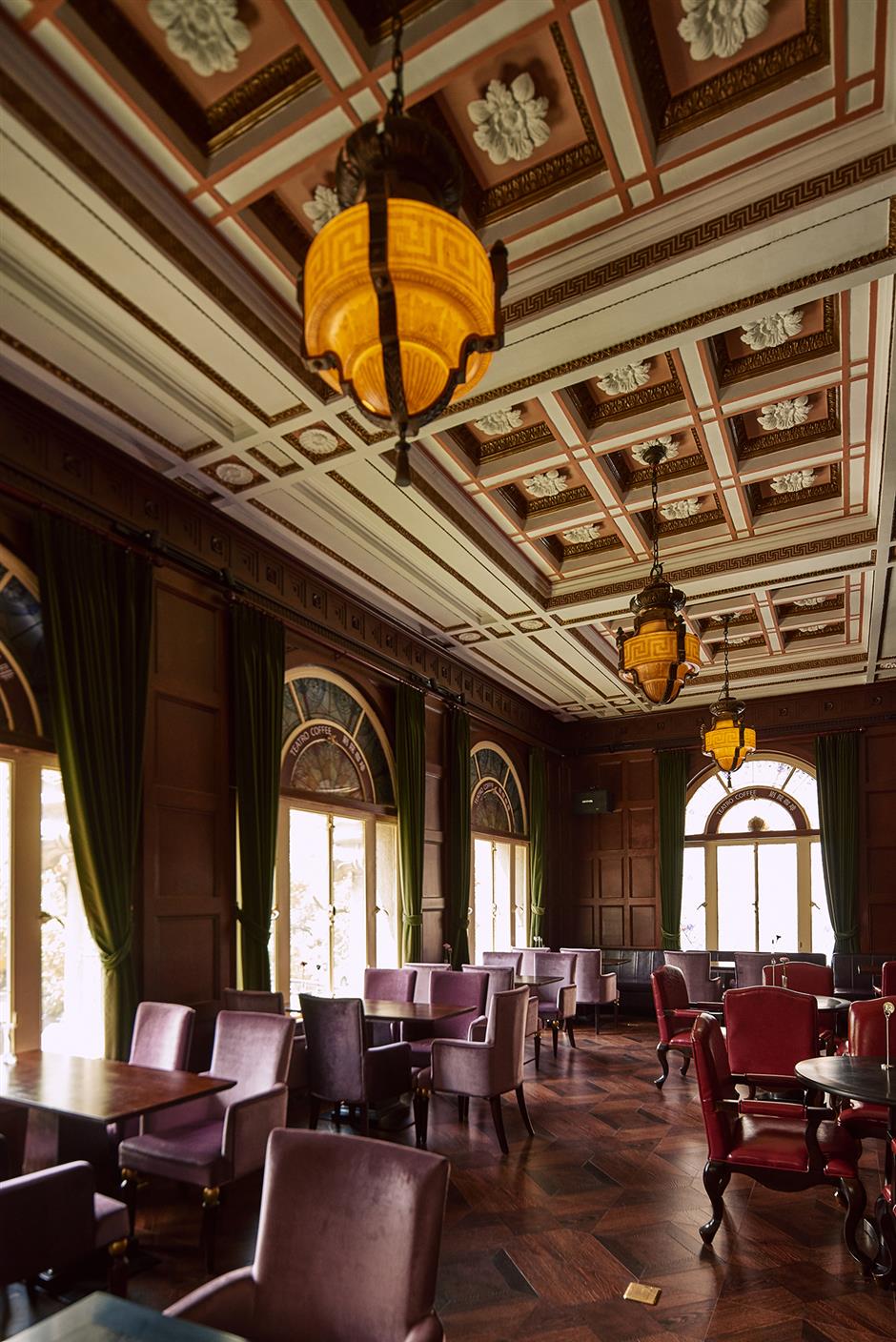 Finished work ‘speaks for itself’

The formal opening took place on Sunday of the new head office building of the China United Assurance Co Ltd at 34 Bubbling Well Road. The building was specially decorated for the occasion and a large number of guests attended

Mr A. J. Hughes, the general manager and honorary director, in introducing Mr Stirling Fessenden, Chairman of the Shanghai Municipal Council, said: “The completion of this building is another mile-stone on the road to the fulfillment of the aims of the promoters of the China United Assurance Society. The Society was started in 1912, just after the inauguration of the Chinese Republic, of which today is the 15th anniversary, in the hope of doing something of real constructive value for the new order of things. 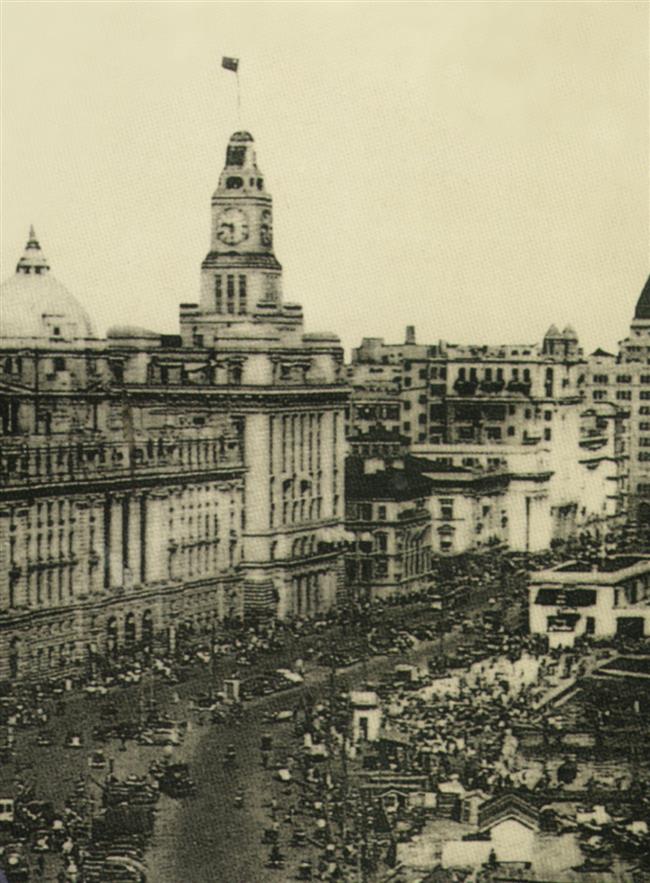 Naturally we are all very proud of this building and on behalf of the Directors and Executive staff I wish to take this opportunity of expressing in a more public manner than has hitherto been possible our appreciation of our architect, Mr Elliott Hazzard, whose finished work speaks for itself of his professional skill. He was specially selected as having had a wide and valuable experience in the erection of similar buildings in New York and the benefit of that experience has been very much in evidence during the whole course of designing and construction.

I take this opportunity of disposing of a rumor which has reached us in regard to the land on which this building is erected. It is not leasehold but freehold property, out own in perpetuity. The whole consists of a square block of nearly 12 mow of which this building and the garages in rear occupy about three mow. It was purchased in November, 1923, at a figure very considerably less than the present market value in anticipation of a very rapid expansion of the commercial district westward and a much more profitable investment than the Central District afforded. Both these anticipations have been realized.