Vipoo Srivilasa’s work explores the similarities between the cultures of his native Thailand and his adoptive home, Australia. His work is playful and profound– as well as being highly collectible.

“The best advice I have ever received is that I don’t have to be the best to be happy,” says Thai-born, Melbourne-based artist Vipoo Srivilasa. “Keeping this in mind really helped me throughout the years. ”

What might sound as an invitation to hold back for some, for an ambitious and active artist like Vipoo is somewhat of soothing balm. The artist explains that he has always worked really hard, motivated by a desire to become the best, but stressing out a whole lot in the process. “That advice stuck with me for me for a long time, so when I get really serious and stressed, I remind myself that I can be happy right where I’m now.”

Vipoo was born in Bangkok and moved to Australia in 1995 to study ceramics at Monash University in Melbourne and to later pursue his master degree at the University of Tasmania. His work explores similarities between the cultures of Thailand and Australia, playfully blending historical, mythological and the pop culture elements in blue and white ceramics. 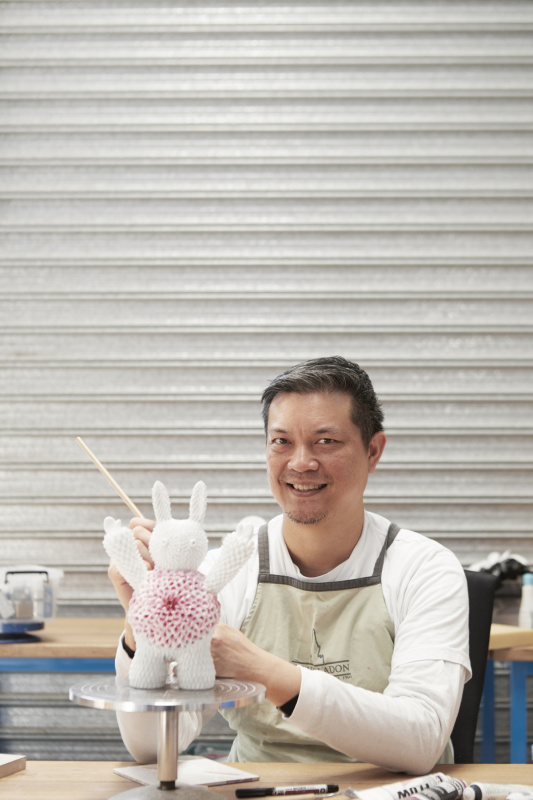 An important part in Vipoo’s practice are collaborations. Indeed, in the past 10 years he has used clay to engage communities into his creative process: “It started because I normally work a lot in my studio and the only social times in my profession are the openings of my shows, once or twice a year. So working with communities is one way I can connect with people and receive energy to go back to my studio and create new work.”

The artist also finds that working with non-art professionals helps him also feel more grounded: “Through that I realise I’m not such a great artist, even though I have been working on it for some twenty years. Someone else who just came to my workshop can make amazing pieces. It’s not about the skills, it’s more about the ideas that people have that always surprise me.”

The first itch for a more sharing artistic practice came with his 2008 show Roop-Rote-Ruang (Taste Touch Tell) at Sydney’s 4A Centre for Contemporary Asian Art: “I went back to the root of ceramics as a functional material, wanting the public to touch, taste, hear and feel my work. So I made a dinner set and cooked Thai food and served it to people. Each course I told stories of how I migrated from Thailand to Australia. When people finished their food they could see an image painted on the plate.”

When you decided to study ceramics were you familiar with the art world already, or did you conceive your practice more as craft in the beginning?

When I was in Bangkok, before starting my degree, I was more focused on creating jewellery. Then, when I finished my degree I learned that ceramics can be an art form in its own right and a material for expression. In the beginning I used to make teapots, bowl and cups, but it wasn’t very successful. So I started making things I really enjoyed, but had no actual function. This kind of work sold really well, so I slowly transitioned into the art world.

Did you experimented with other materials before choosing to devote yourself to ceramics?

I was very deliberate, focusing on ceramics right away. At the university in Bangkok ceramics is normally considered the lowest department, a plan b for many, but I chose it as my main and only one. Looking back, it shows that I dedicated my life to this kind of work. I think it helped me further in my career because I had one specific focus.

When you started working in Australia, was it ever your plan to move there permanently?

It never was the plan to move here for good. I thought of only doing my master degree and go back to Thailand, but then I met my partner while I studied. We started becoming a serious couple and then I decided to stay here. It has been twenty-something years now. When I was in Thailand I wasn’t known as an artist, so I started fresh here in Australia. I built my career in Melbourne from zero. Having said that, when I go back to Thailand is a lot easier to exhibit there as an artist, mainly because I made it in Australia.

As the saying goes, “no one is a prophet in their own land.” But let’s switch gears and talk about this current show you have in Adelaide, highlighting three different aspect of your practice. The country I miss is from 2012, Home 2012 as well and This might be the place is the most recent from 2017. Can you walk me through these different aspects of your practice?

The 2012 pieces and the new work are tied together in their exploration of the concept of home, how you define it and what happen when you migrate. For the series Home I worked with the Korean expats in Melbourne, and I helped them create with ceramics what they missed the most about their hometown. The other series of work that has an audience participation component is called The country I miss. I asked people to make lotus from plasticine and put the spoon inside the lotus. The spoon represent the tragic riots some years ago in Bangkok between the red shirts and the yellow shirts. The spoons represented poverty in terms of people not having enough food to eat, and each spoon is painted with a portrait of a person. I associate it with the lotus in Thailand and in Buddhism represents transformation or purification.

And then there is the new work I created, called This might be the place. It’s about things that people bring to Australia which are not native to Australia and how they change the environment. For example, Australia didn’t have rabbits in the beginning, but then the Europeans introduced them into Australia. They quickly spread and became a pest. I put them in my work. I also used the elephant god Ganesh. Non-hindu people in Australia have Ganesh in their house, as a decoration. As I see it Ganesh has became a symbol for the mix of cultures, so I used it quite a bit in this new work as well.

Do you always work with series?

I work towards shows, normally eight to six months in advance. The themes depend on what I want to say on that particular time, and I try to make each exhibition a little bit different to better marketing my work. Because as a collector if you miss one show you won’t get a similar kind of work again. In this way those who collect my work can identify their pieces and place them in time.

You are very good at taking care of both the commercial side of your work and the hands-on artistic process. How do you manage the bureaucratic time versus the spiritual time of your practice in your schedule?

I normally get up early in the morning, 5.30, and I meditate for half an hour. Then I go to the studio at about 7.30 – it’s about 10 minutes drive from my house. Then I work till 3.30 and have half an hour lunch. Next I go home and work on the computer. I’d do paper work, emails, apply for grants, write to galleries. The ideas come in the morning, I might do some research online or on books. I would normally work on two, three pieces at the same time because you have to let ceramic dry before adding more clay. So if I work on only one piece at the time I would be very slow. For example I might do six different legs which I would later put on different pieces. I plan a lot in advance, so I know what I need to do each day to be on schedule. I may produce maybe 4, 5 pieces, then I stop making and start painting the works, and then they glaze and then fire them. When I finish those pieces, I clean up the whole studio and restart the cycle again.