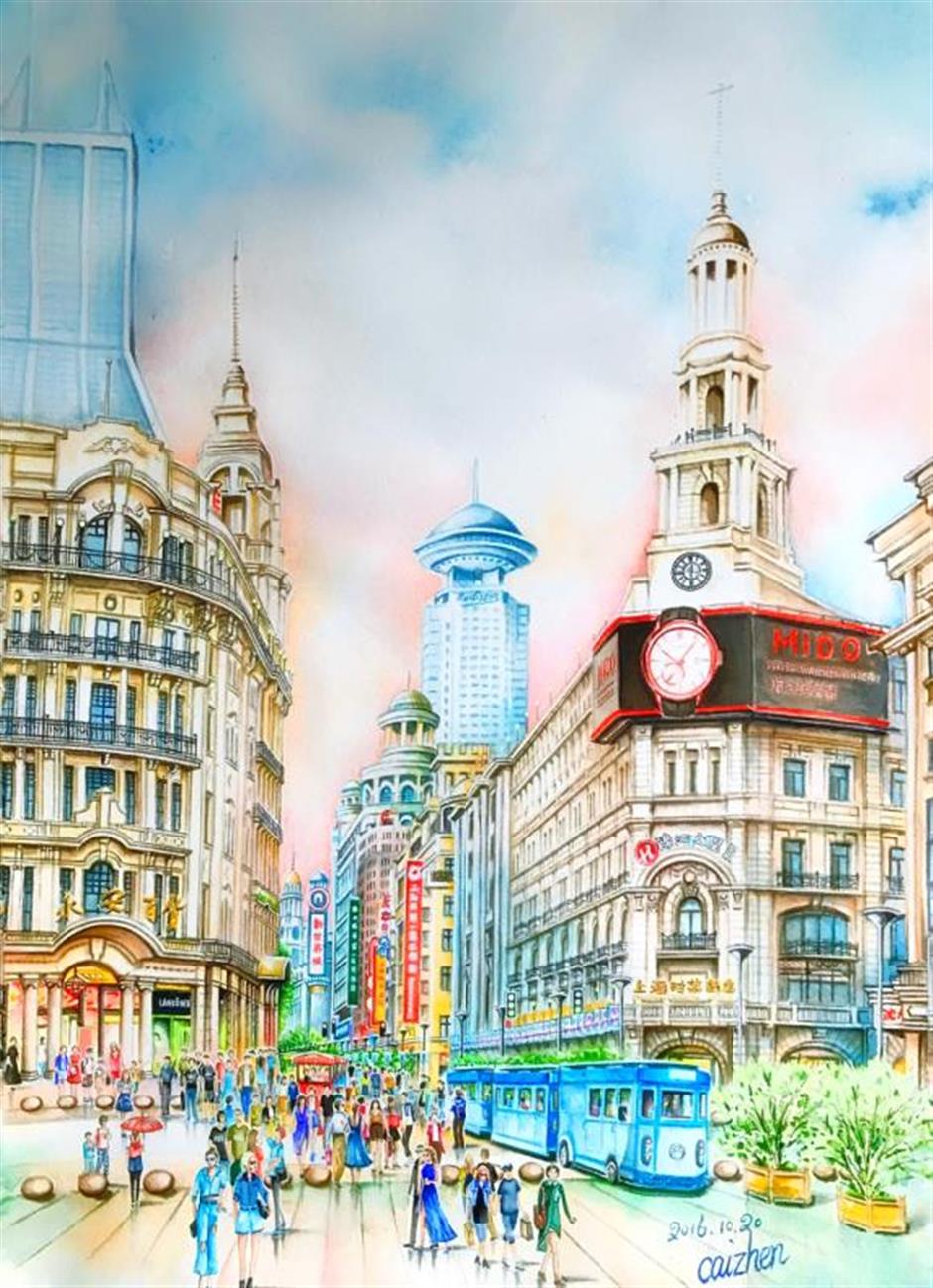 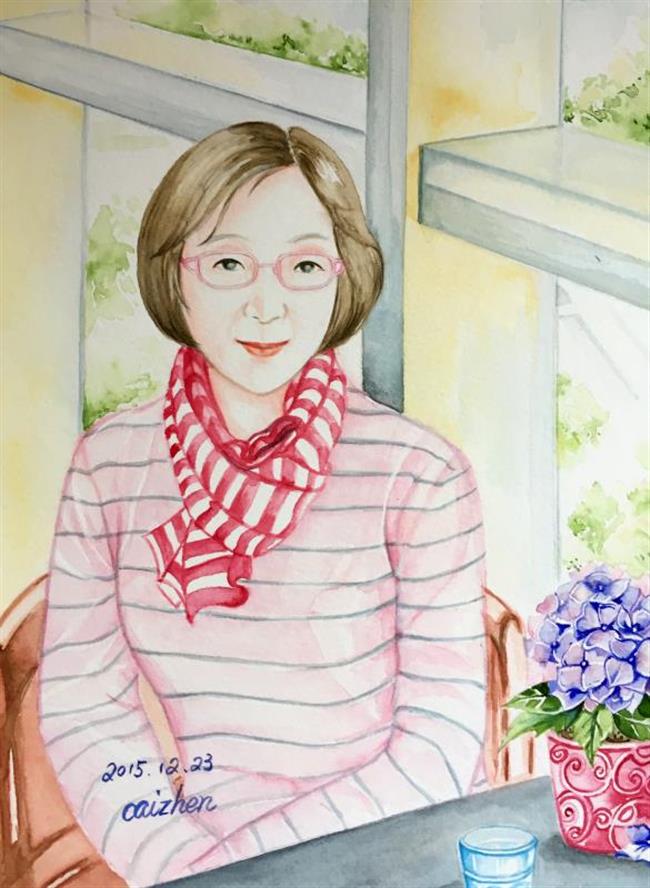 A watercolor self-portrait of Cai Zhen

Having grown up in an old Shanghai house on a narrow street behind the downtown Nanjing Road E., Cai Zhen paints watercolors exclusively of the city’s historic buildings, old villas, small lanes and neighborhoods.

“It was only a two-minute walk from my home to the Wing On Department Store,” she recalls.

In an old black-and-white picture taken more than six decades ago, Cai’s mother smiles with three little daughters on the balcony of their house. Behind them is the city’s then second-highest building Qi Chong Tian (now the Seventh Heaven Hotel), designed by American architect Elliot Hazzard in 1932.

“The three girls were my elder sisters and I was already in my mom’s tummy at that time,” Cai, 62, says with a smile.

Her happy childhood memories center on the balcony, where she enjoyed the city’s neon-lit night skyline and festival fireworks on National Day.

“The picture is black and white, but the past times are still vivid and colorful on my mind,” Cai says.

Passionate about art and painting since childhood, she started to paint Shanghai’s old houses in retirement seven years ago. She uses bright, vibrant colors and paints from an original perspective.

On the second floor of an old house on Shaanxi Road S., Cai is holding a solo exhibition of 49 watercolors. It runs to next Friday and entry is free.

“These are some of my paintings, highlighting Shanghai’s old landmarks,” she says.

Cai’s paintings revive the days when she went on dates to the Cathay Cinema at 870 Huaihai Road M., marveled at the dazzling goods in the Wing On and the Sincere department stores on Nanjing Road E. and idled away an afternoon at the Cottage Cafe and Bar, a German garden house in an eclectic architectural style built in 1927 on Taojiang Road.

“When I’m looking at my paintings, it feels like I’m traveling back to my cherished youth,” Cai says.

Painting in a realistic style, she never misses a detail of an old house — shadows of the tree leaves, a reflection in the glass or a cat on the window sill. She always tries to present the architecture as a whole instead of focusing on one part. Her reminiscence of time lost is hidden behind the bright colors, soft lines and sweet tones of the picture. 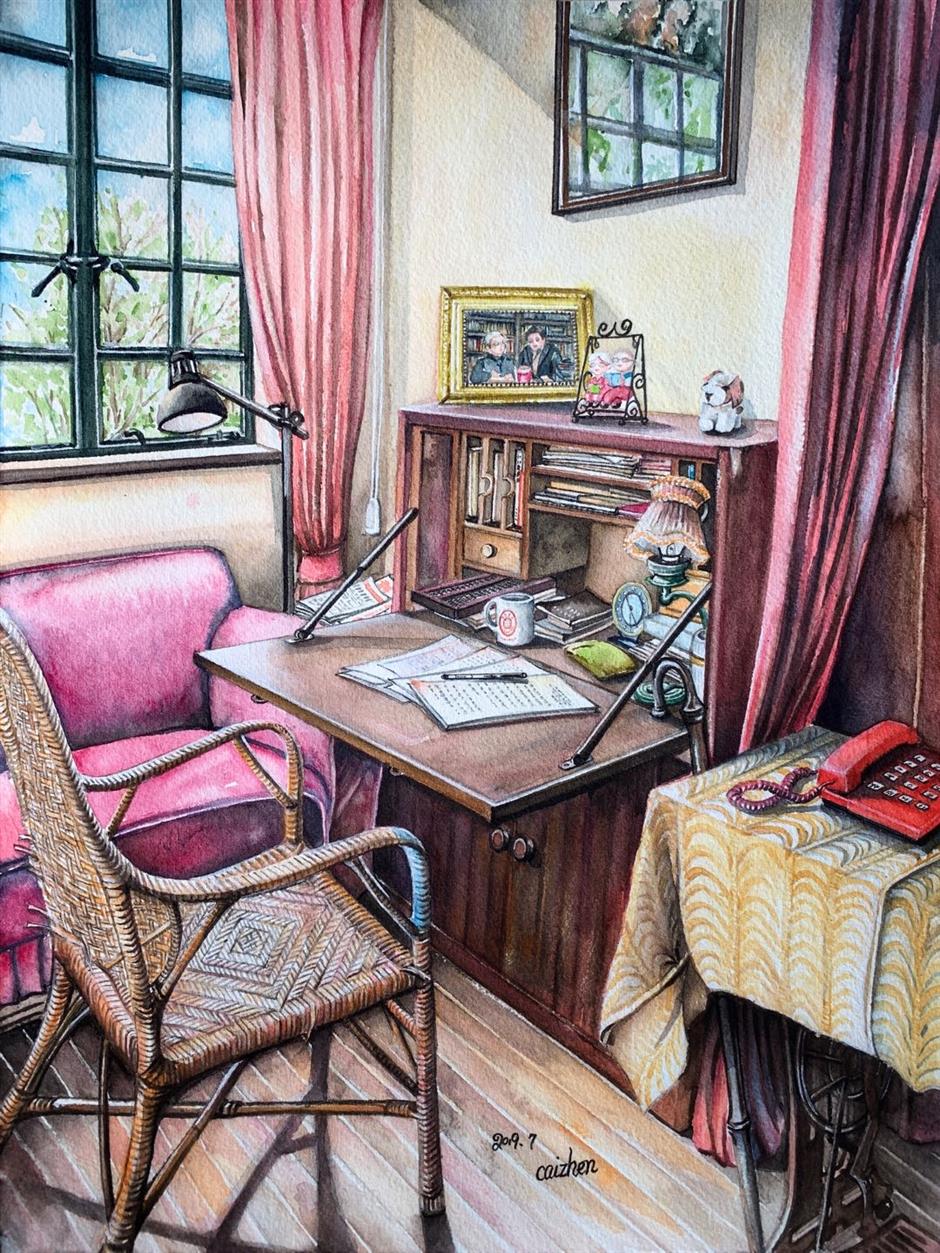 Inside of the former residence of film theorist and playwright Ke Ling (1909-2000) on Fuxing Road W.

With a camera in hand, Cai often explores the city alone. She first takes numerous photos of a heritage building to capture as many details as possible, and pieces them together into one painting.

It’s not all that easy.

When she took photos of the former Chung Wai Bank (today’s Central Place on Henan Road S.), it was hard for her to find a good spot  because the building was blocked by the nearby Yan’an Elevated Highway.

She managed to get to the top of a nearby building to take the photos.

“I paint in detail because such scenes would probably be lost forever when I return once again,” she says. “So I present them the way they are.”

The detached garden house at 525 Xiangyang Road S., formerly known as Route Tenant de la Tour, was the second building designed by the architect Alexandra Leonard after he arrived in Shanghai in 1920, but it was his first completed building.

The original blueprint was a three-story villa, but today it has four floors. Cai ventured into the house many times and made a good friend with the hostess Lady Huang who lived on the third floor for almost 70 years since she was born.

“To my surprise, the lady preserved the original style of the third floor so well,” Cai said. “She did not change its interior decoration or the old structure.”

She gained many details about the house from Huang’s life stories and her old family photos taken in the 1960s.

“Her life has been intertwined into the house,” Cai says. 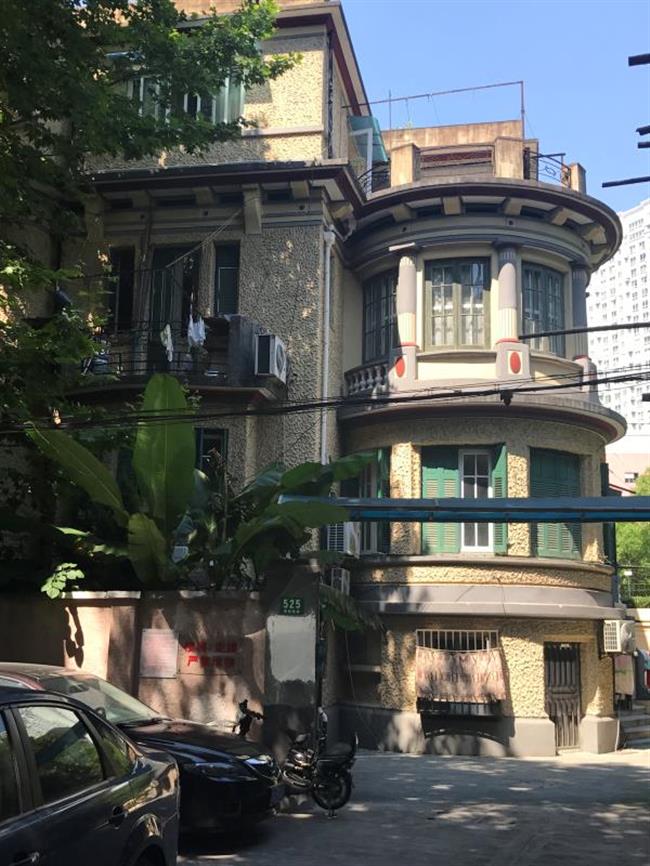 The garden house at 525 Xiangyang Road S. designed by Alexandra Leonard in the 1920s 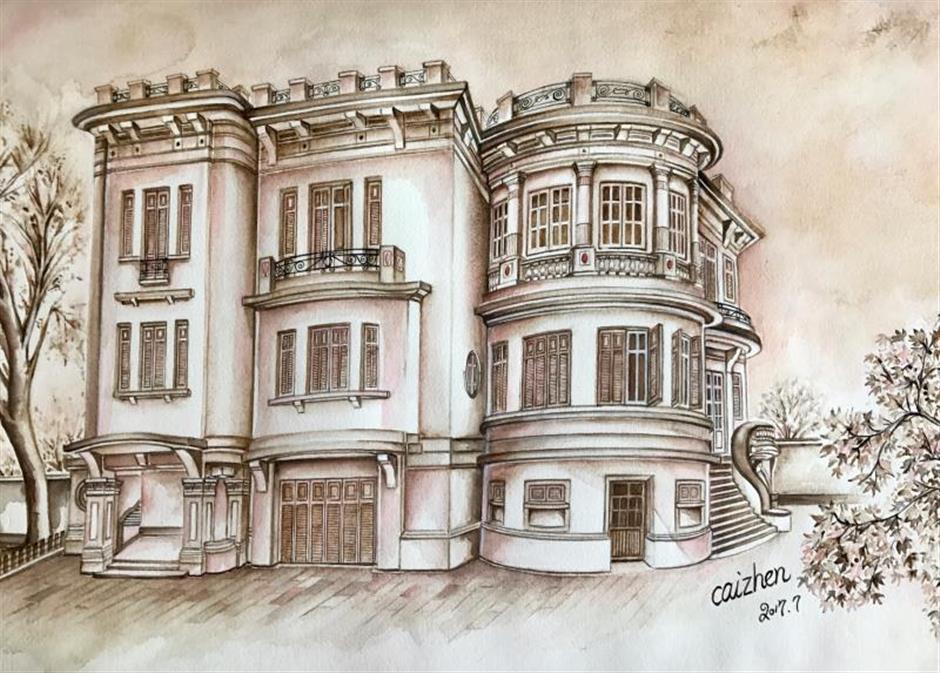 Cai’s painting of the house

Currently she is working on another painting of the villa, and will present it as a gift to Huang when finished.

Sometimes Cai carries her sketchbook and pigments when she goes on outing. Her sketchbook is a mini album and travelog that records her footprints at Normandie Apartments on Wukang Road, former residence of the painter Liu Haisu (1896-1994) by the Fuxing Park, the Spanish-style Yifeng Garden on Hongqiao Road and many other buildings.

“It’s more personal and freestyle, like a diary that records my daily life and the city changes,” she says.

Many old buildings in the sketchbook are or will be demolished due to urban renewal. She has painted a convenience store at the Jinjiafang Community in the Laoximen area, which has since been demolished. The shabby, dim-lit store in a street corner piled with all sorts of foods, drinks and groceries was once a collective memory of the elderly in Shanghai.

“Such scenes are disappearing,” Cai says. “I could do nothing about it but at least I can preserve them in my way with the brush on the paper.”