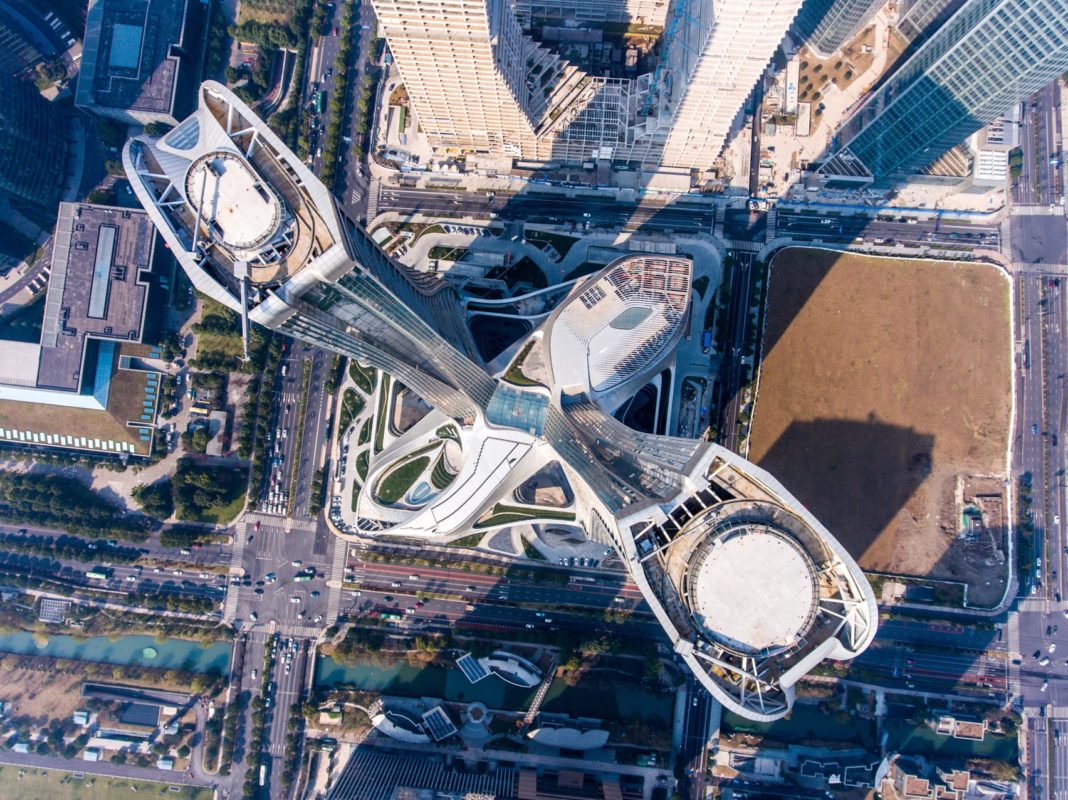 Dutch firm UNStudio has completed a mixed-use development in the Chinese city of Hangzhou that accommodates a hotel, offices, apartments and shops, within a pair of sinuous towers connected by a podium and landscaped plaza.

Raffles City Hangzhou was designed by UNStudio for real estate company CapitaLand. Described by the studio as “a sustainable urban hub for living, working, and leisure”, the huge complex is located in the city’s Qianjiang New Town area.

The development forms a prominent landmark in Hangzhou’s new central business district, with a total area of almost 400,000 square meters spread across the two 250-meter towers, the podium building, and the surrounding plaza. 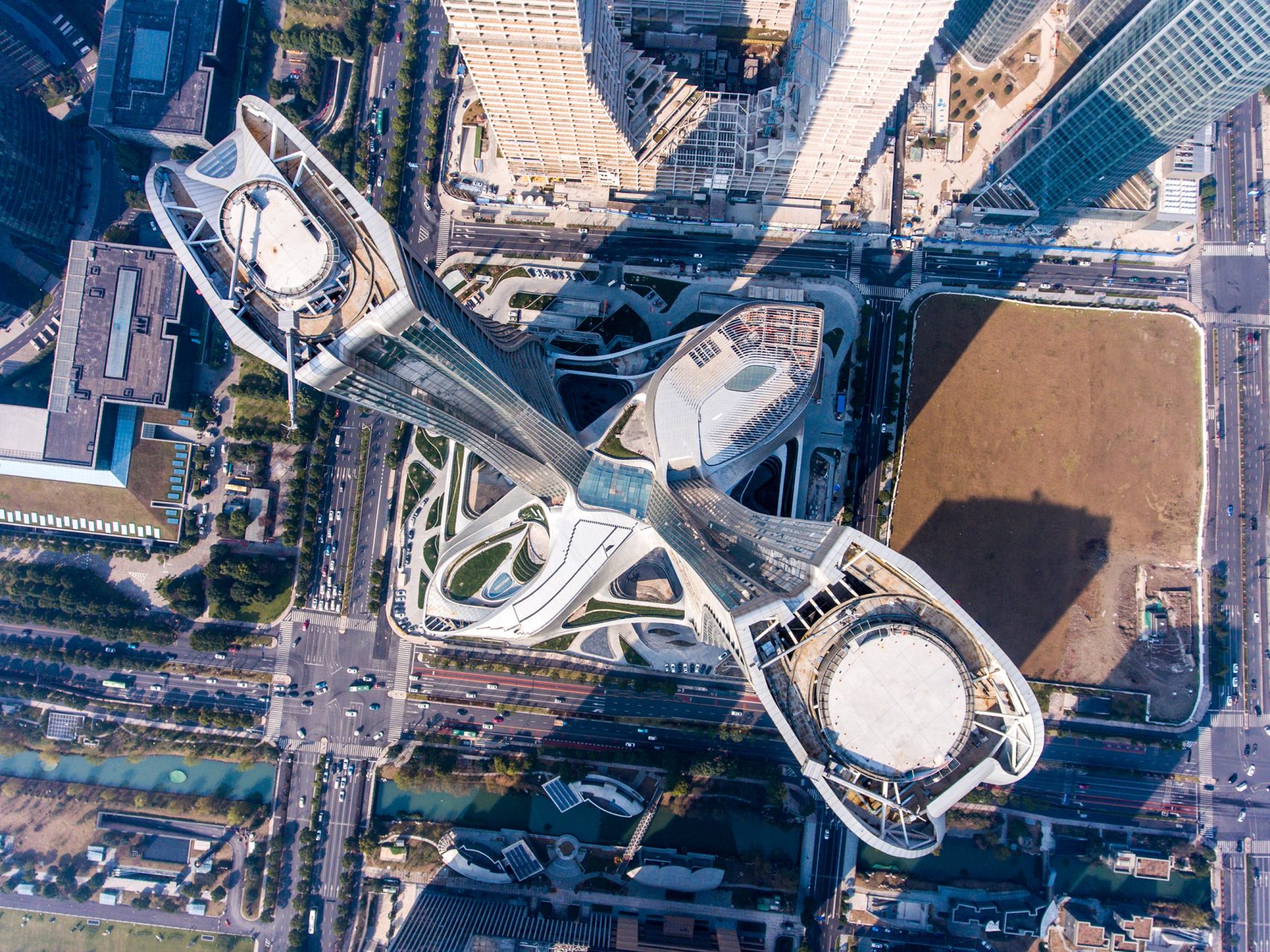 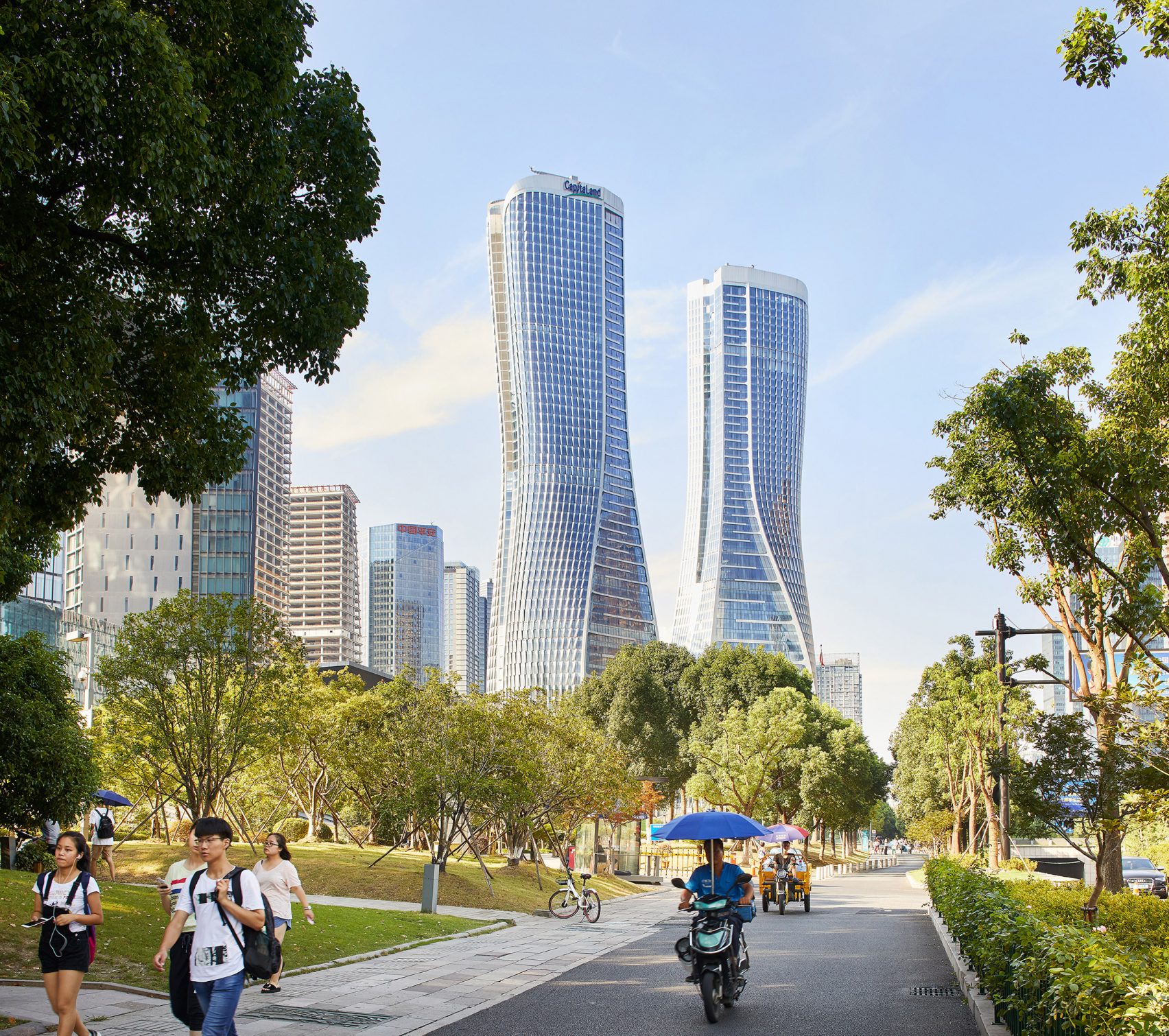 The project’s completion follows the opening of a shopping centre that UNStudio designed in Shanghai, which is covered in an intricate grid of diamond-shaped perforations.

The development in Hangzhou is informed by the firm’s focus on a concept it calls Superliving, which involves mixing different programmes in efficient structures that enhance the urban experience for residents and visitors. 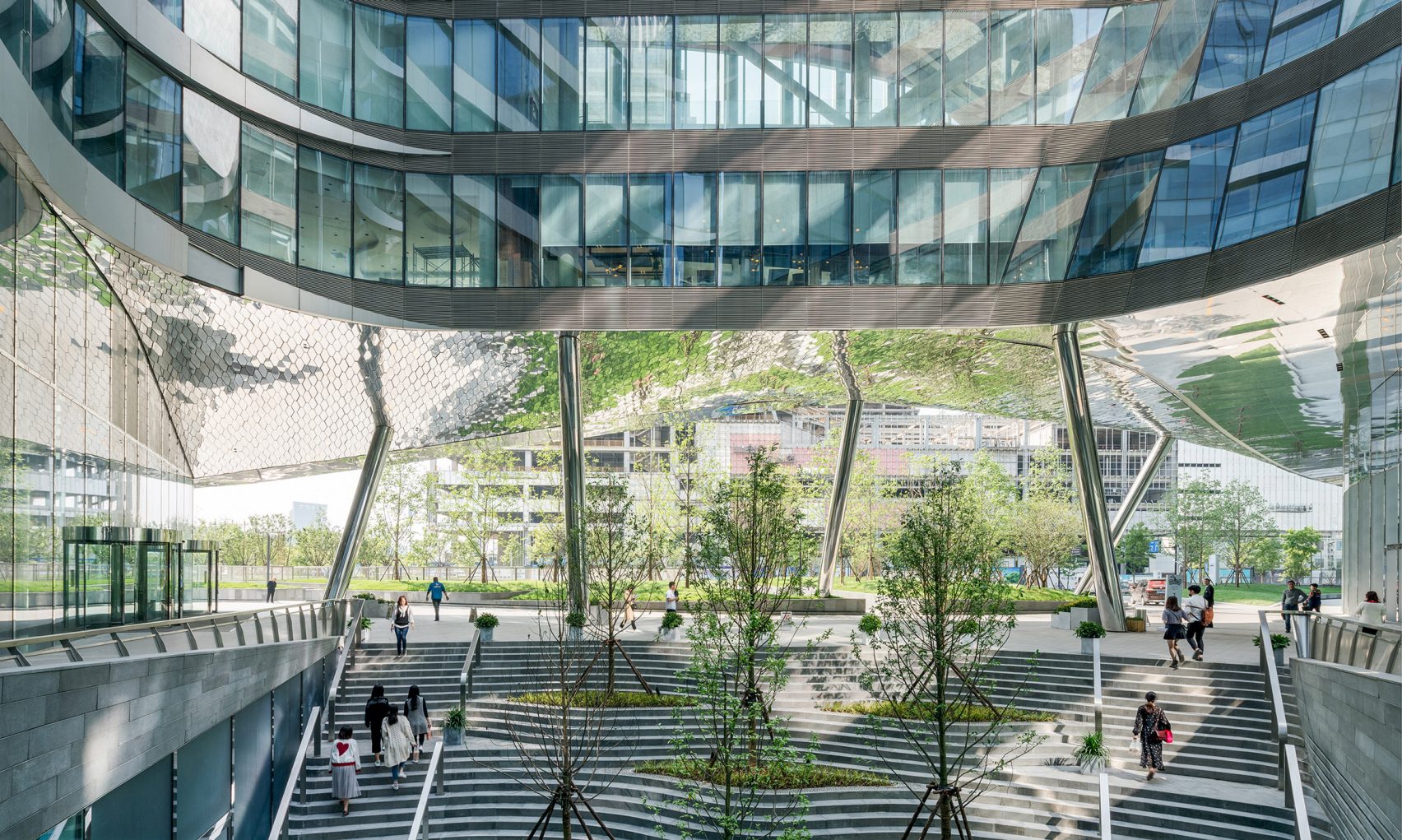 The project team described the complex as “a lively vertical neighbourhood and transit hub” that accommodates all kinds of activities in a dense and considered arrangement of spaces.

“Besides working and living at Raffles City, people can stay at the hotel, or pick up groceries, enjoy a meal, do exercise, watch a movie or even get married there, all-in-one interconnected environment,” the firm added. 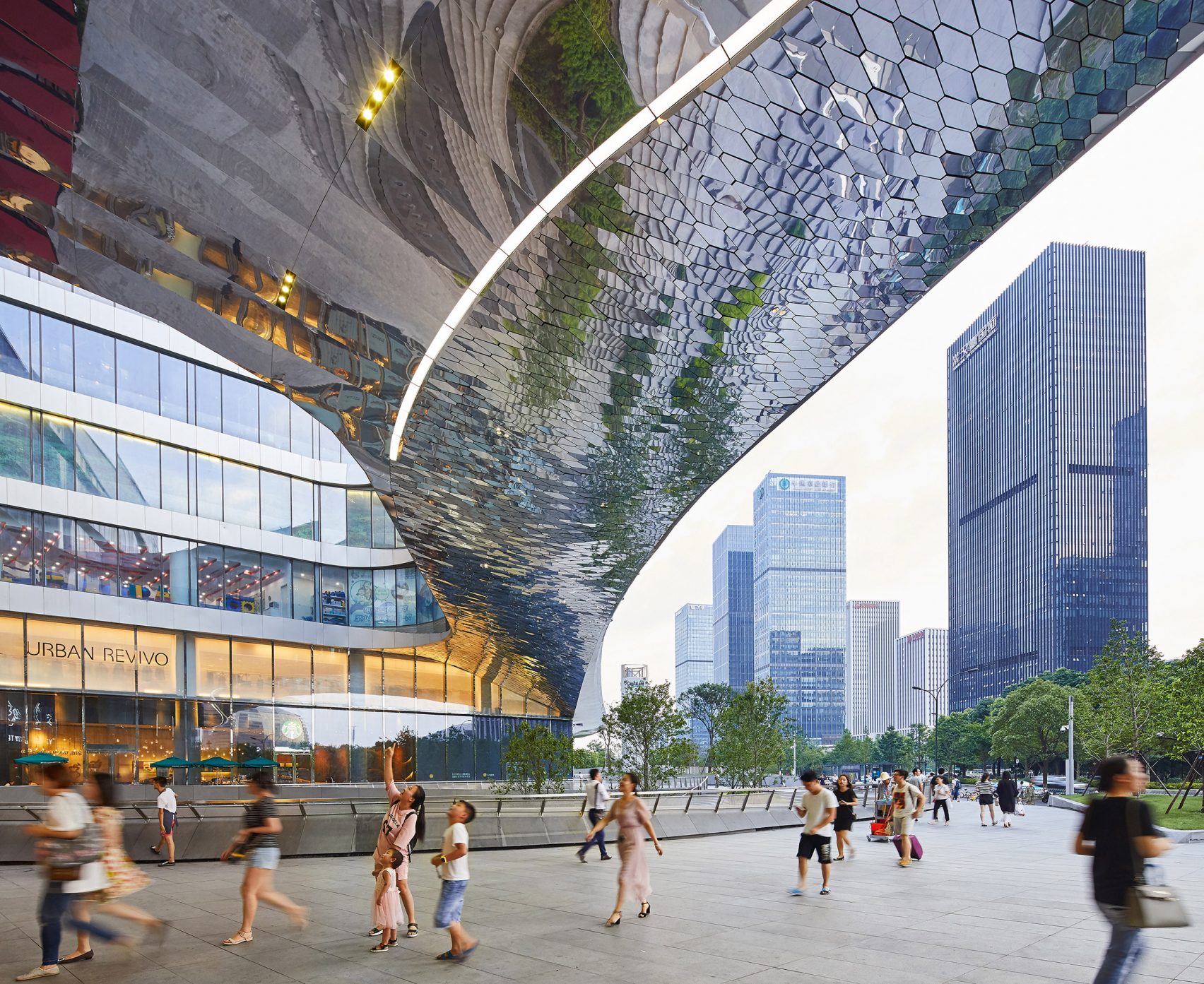 The two 60-storey high-rises contain apartments, offices, the Conrad Hotel and a rooftop helipad, all with views towards the Qiantang River and the city’s historic West Lake district.

The six-storey podium contains shop units, restaurants, leisure facilities, parking and a direct connection to the metro transportation system, with a main entrance on a corner facing the adjacent park and city centre. 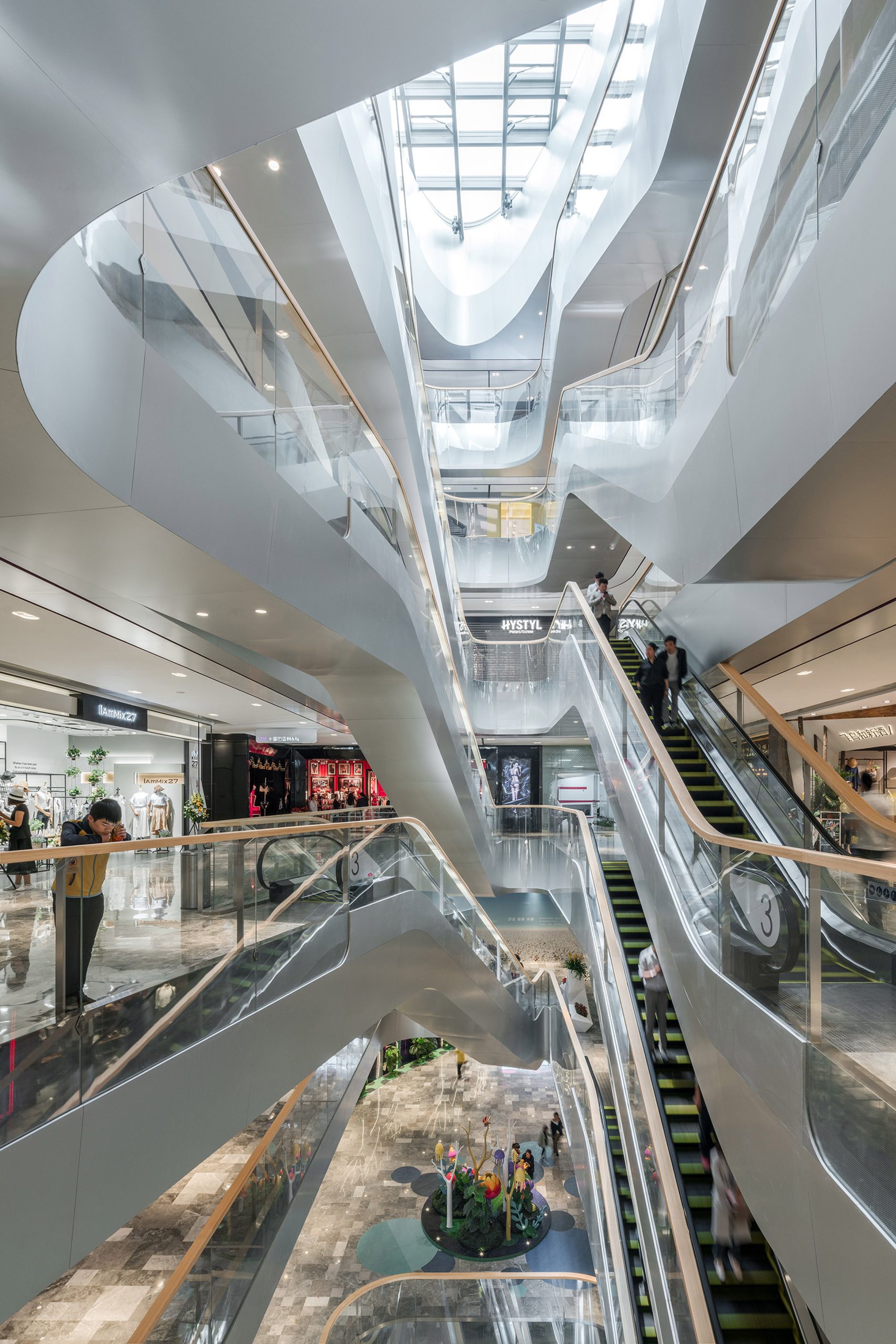 The design of the project references the movement of the river in its fluid surfaces, which start out calmly at the base and then sweep dramatically across the exterior of the two towers. This dynamic aesthetic seeks to unite the diverse programmes contained within the complex.

The towers are arranged on an east-west axis that minimises overshadowing and allows daylight to reach the apartments and offices. 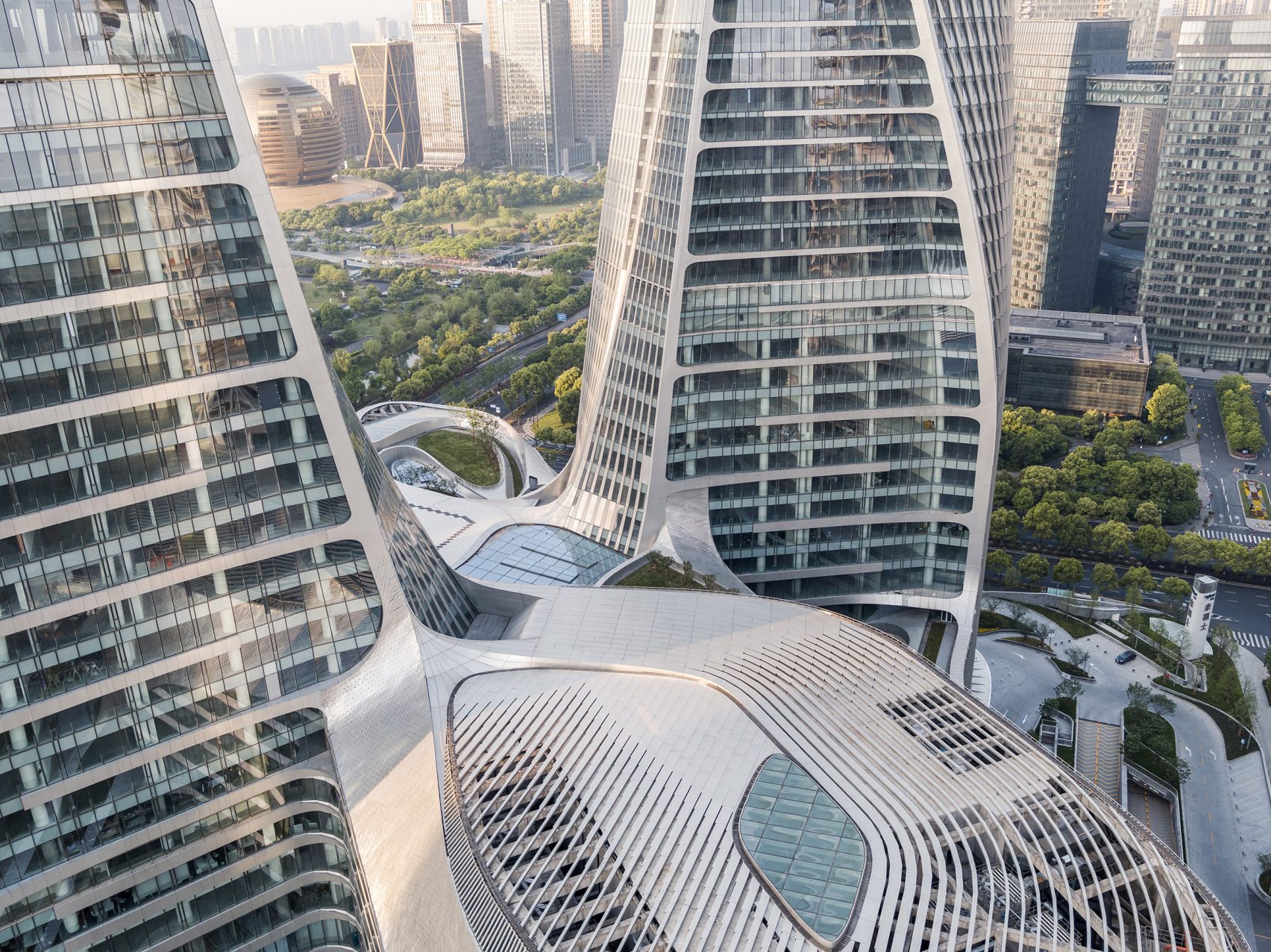 At street level, the podium building is covered in a skin of scale-like aluminium tiles that display pixellated reflections of the surroundings and the movement of passers by.

A layer of vertical solar-shading fins applied to the glazed curtain walls of the towers emphasises the twisting forms and frames views from the interior.

The plinth houses retail units arranged along a central spine, with a huge atrium at the centre providing the main visual and navigational focal point. 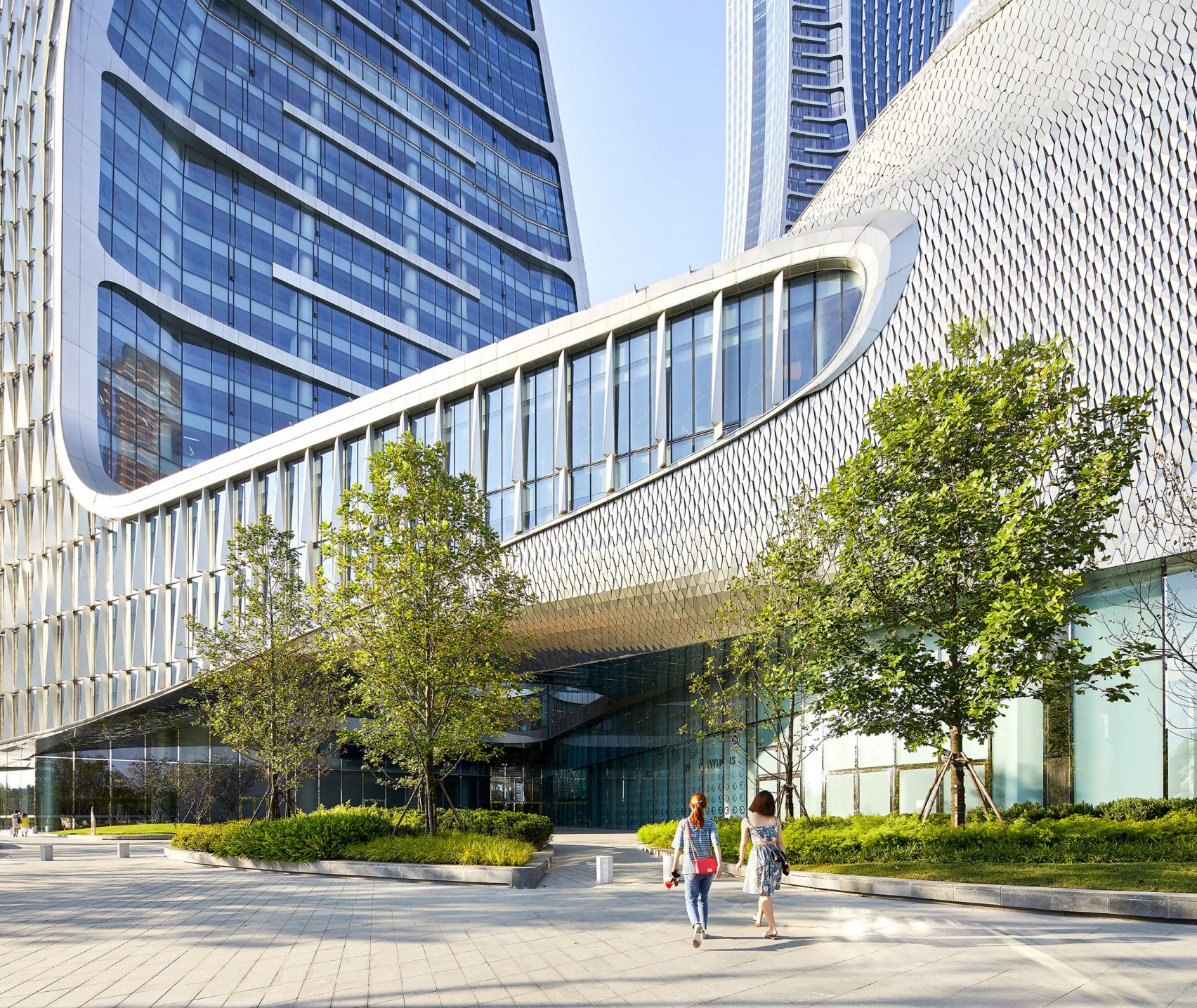 Overlapping levels that spiral around the atrium’s perimeter are connected by escalators and stairs. A meandering bamboo-clad handrail complements the forms of the building’s exterior and introduces a natural detail to the otherwise futuristic interior.

As the main circulation hub for the retail area, the atrium provides extensive views across the building and through a pair of diagonal voids that extend seven storeys in either direction. 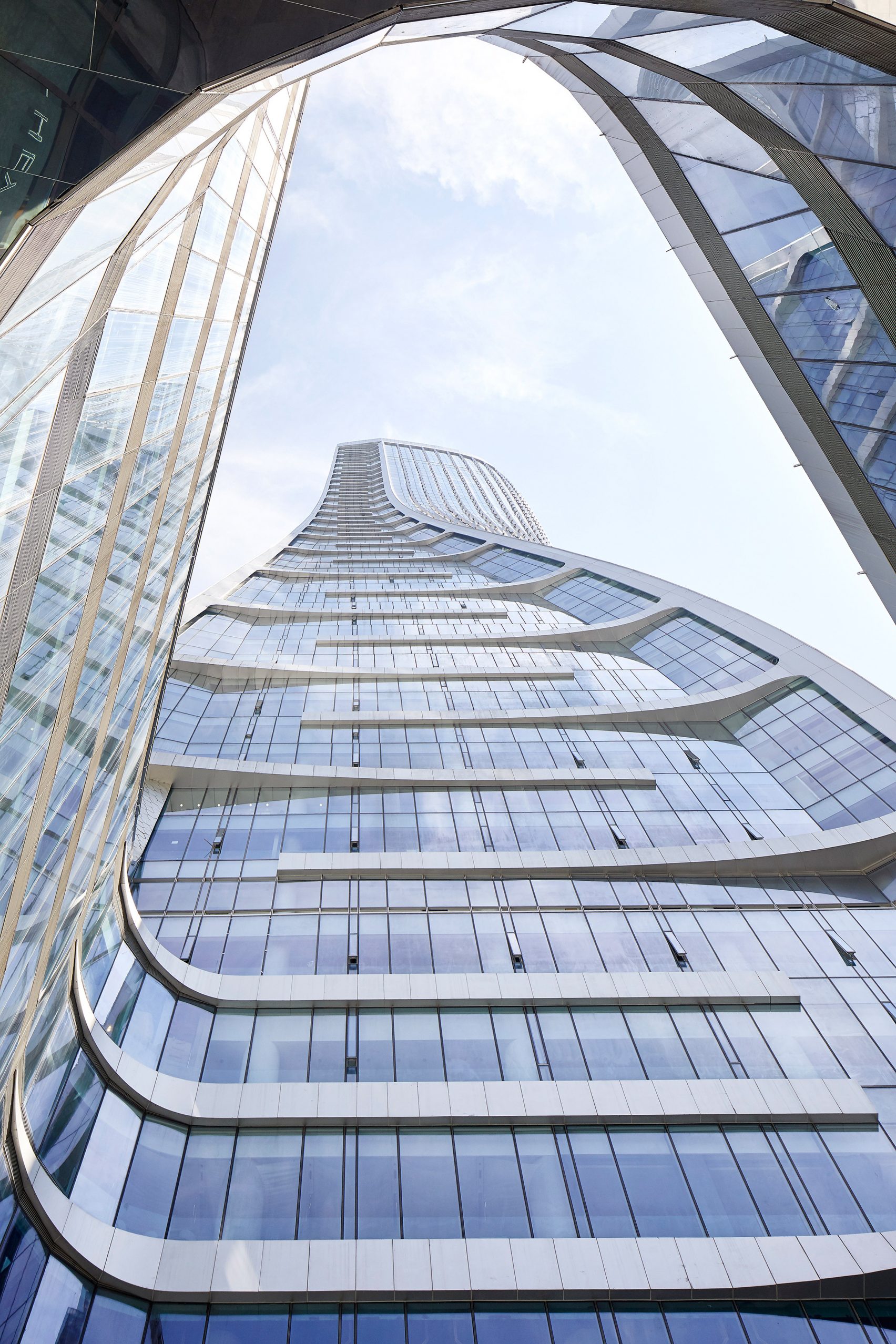 A skylight that covers the atrium frames views of the towers from anywhere in this area, and ensures natural light penetrates deep into the building through the two voids.

UNStudio’s other recent projects in Asia include the transformation of two urban blocks in Daegu, South Korea, which involved adding digitally designed patterns to the facades of more than 20 skyscrapers.

Photography is by Hufton + Crow and Seth Powers.

Video is by Seth Powers.