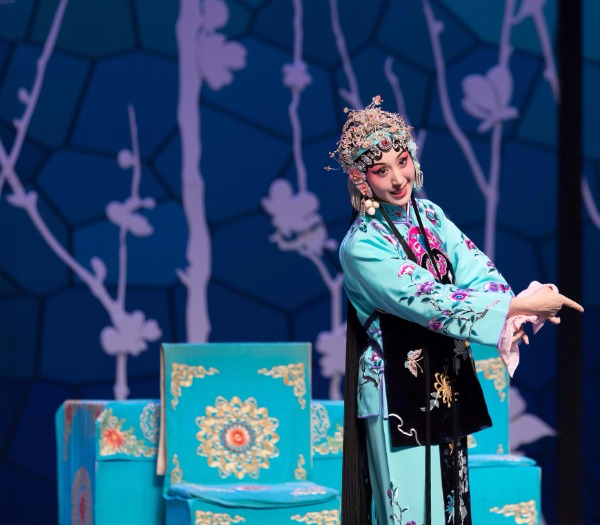 The 200-year-old Peking Opera is an inalienable part of China’s culture. And of all the techniques, types and varieties, nandan is a key part of the art.

The practice of nandan began at a time when women were not permitted to take to the stage.

On May 1, a Peking Opera performer from Shanghai Peking Opera Company, Shi Yihong, made a bold move to bring together the classic repertoires of the four great nandan masters in one show at the Shanghai Grand Theatre.

Each piece was about 50 minutes, with a 20-minute break in between.

Over September 22-23, the Shanghai-based artist will bring the show to Beijing, performing at the National Center for the Performing Arts.

On the first day, she will perform The Story of Su San using the Mei style and Wang Zhaojun using the Shang style, followed by Jin Yunu in the Xun style and A Young Woman’s Dream in the Cheng style.

The four female roles are of different ages and come from different backgrounds.

For example, Wang Zhaojun is a famous ancient Chinese beauty who volunteers to marry a ruler of a Hun tribe in exchange for friendly relations with the Han Dynasty (206 BC-AD 220).

And as for Su San, she is a woman from the Ming Dynasty (1368-1644), who is framed for murdering and sentenced to death.

Speaking about the performance, Shi says: “There has long been a rule that students of the four schools stick to their respective styles of performance.

“The idea for me to present the four classic roles came from my fans, who wrote me letters and gave me advice.

“In the beginning, I thought it was a crazy idea,” says the 46-year-old.

“It was not only physically challenging but also risky to push the boundaries.

“Each of the four styles has its own singing technique — such as higher or lower vibration and how to make the words sound.

“The pieces were designed for the four styles so I learned them from the beginning,” she adds.

But Shi’s career shows that she is not afraid of taking risks.

She began her Peking Opera training as a wu dan, or a female martial arts performer, at the Shanghai Folk Opera School at the age of 9.

And when she turned 15, Shi took up qing yi roles, which are young or middle-aged women characters that exude refinement and grace, and became a disciple of the Mei Lanfang school. She later joined the Peking Opera Troupe of Shanghai, where she performed a series of classic roles once interpreted by Mei Lanfang and his students.

Then, in 1999, she collaborated with Oscar-winning composer Tan Dun, as well as presented a Peking Opera adaptation of Victor Hugo’s classic novel Notre Dame.

In 2017, she combined a Peking Opera classic, Farewell My Concubine, with chamber music in Shanghai. The production was staged at Princeton University and the Metropolitan Museum of Art in New York last year.

“The 600-year-old Kunqu Opera enables me to control my breath and to better understand my roles,” says Shi.

Speaking about Shi, Cai, who will perform with Shi in the Peking Opera piece Jin Yunu, says: “She is innovative in her art and innovation is the key to keep the art alive.”