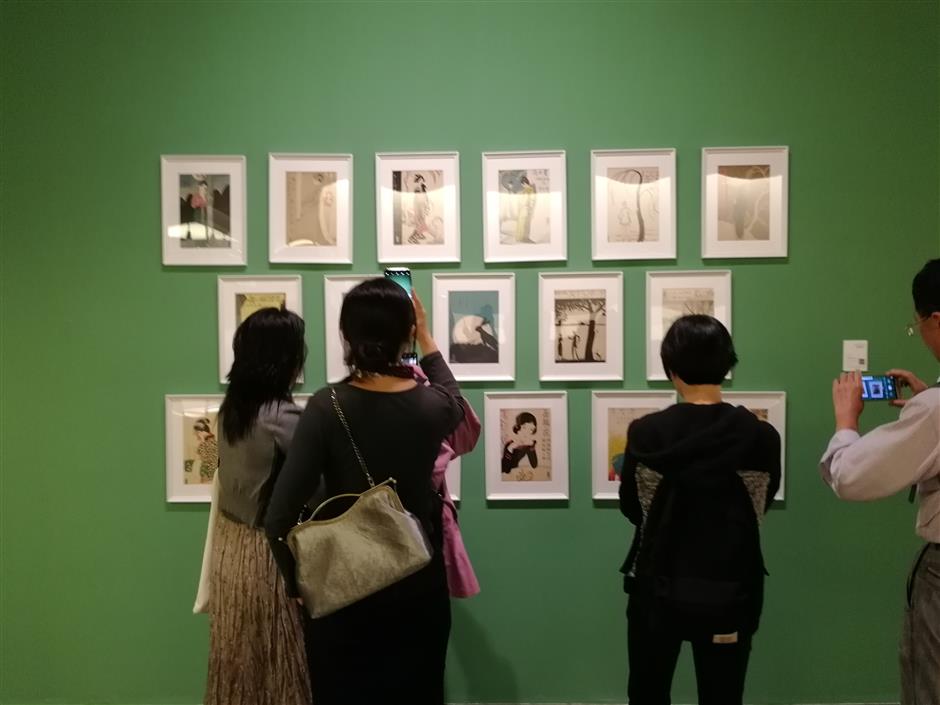 If you are a fan of artist Feng Zikai (1898-1975), the Xiaofeng Bookstore in Hangzhou is probably a good place to “meet up” with him. There will always be a corner devoted to him, his paintings, his books, books about him and numerous products featuring his work.

Zhu Yufang, owner of the bookstore, has been in the business for over 20 years. She first came across Feng back in 1993. When she opened her own store three years later, she started to collect any of his work she could find.

“The simple stories he painted struck a chord in me, and I wanted to share that with my customers,” said Zhu.

This month at Zhejiang Art Museum, visitors have the chance to appreciate and understand Feng’s art and life in close-up. “A Fair Land This Is,” a retrospective celebrating Feng’s 120th birth anniversary, runs through November 11.

The exhibition gathers over 300 works and documents from Feng and the artists and intellectuals who influenced him and befriended him. Diligent and prolific, Feng was a polymath of his time whose artistic talent stood out in a variety of fields. 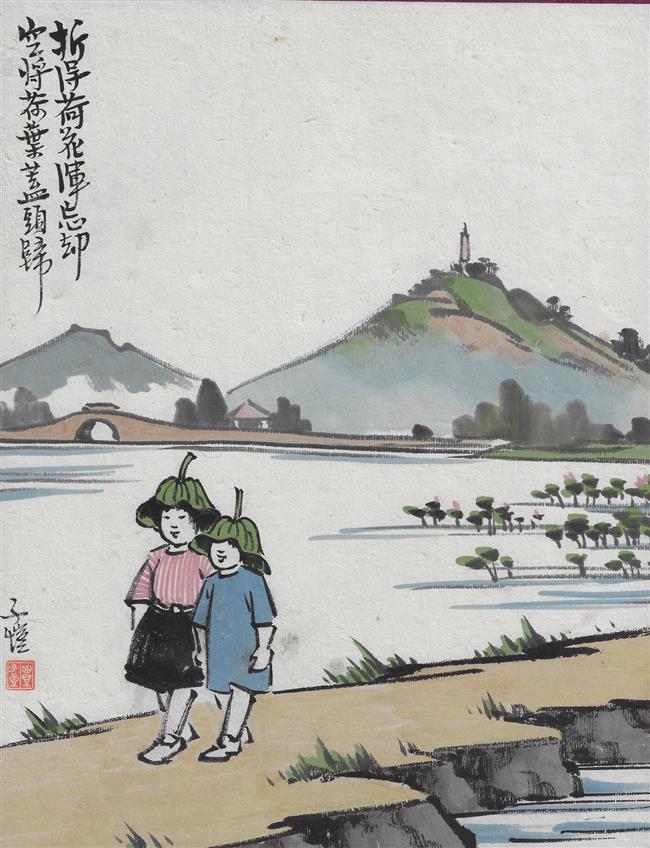 One of Feng Zikai’s paintings

He was the first person in China to use the word manhua (漫画, impromptu sketches) in a modern sense referring to his own brush-pen sketches. He was the translator of the first edition of “The Tale of Genji” published in China. He composed the Fudan University anthem which is still in use today. He designed book covers and drew illustrations for writers and children’s books.

For China’s millennials, their first knowledge of Feng probably comes from textbooks. In these essays he talks about his children, his cat and other trivialities.

In a lifetime of wandering China, Feng loved Hangzhou the most. He talks about it several times in his work as a “second hometown,” after his birthplace in Tongxiang, Zhejiang Province.

He first came to Hangzhou when he was admitted to Zhejiang Provincial First Normal School, where he learned from some of the most pioneering thinkers, artists and scholars of the time.

The exhibition showcases the calligraphy of Xia Mianzun and Li Shutong, both his teachers. Xia taught him how to write properly while Li inspired his versatile interest in art.

In 1926, Feng came from Shanghai to visit Li at the Zhaoxian Temple in Hangzhou. Li was already ordained as a monk and known to the world by his Buddhist name Hong Yi.

Feng arrived quite early in the morning but was stopped at the door. The guard told him that Li would only receive guests after 5pm since the day had to be spent on sorting out an interpretation of Avatamsaka sutra. So Feng waited patiently.

When he returned in 1946, he stayed temporarily in the temple and reminisced over traces of Hong Yi who had died four years previously in Quanzhou, Fujian Province.

A year later, Feng found a bungalow on the present Beishan Road not far from the temple, his fourth and last residence in Hangzhou. He put up a couplet on the front door of his new house, which read “Living in Geling neighboring Zhaoxian Temple, facing Fanghe Pavilion at Gushan Hill.”

He called it the “lakeside residence.” After a day’s work he drank Shaoxing wine. His friends visited him regularly. But he turned down several invitations to work for the government from the mayor.

“Actually renting such a house in Hangzhou was not economically wise,” Yang Ziyun, Feng Zikai’s grandson, told Shanghai Daily. “But my grandpa said the beautiful scenery and life with his children nurtured his art. Those were the true benefits.”

Both Zhaoxian Temple and Feng’s old residence on Beishan Road are nowhere to be found. In 2013, an outlet of the Xiaofeng Bookstore opened on the original location of the temple, next to the entrance of the New Hotel.

Zhu first met Feng Yiyin, Feng Zikai’s youngest daughter in 2002, in her home in Shanghai. Zhu asked if she could take one of Feng’s paintings as the bookstore’s logo. “The office” is now printed on Xiaofeng’s business card. It shows two children sitting face to face on a wicker luohan (罗汉, arhat) bed, probably doing their homework.

Another of Feng’s pictures appears on the store’s shopping bag. The picture shows an empty teahouse with the teapot and teacups still on the table, probably still warm. The bamboo blinds have been rolled up and a new moon is hanging in the sky. Alongside the picture, a verse from a Song Dynasty (960-1279) poem is enclosed to highlight the theme.

The exhibition also shows how Feng became a painter as we know today. After graduating from school in Hangzhou, Feng decided to go to Japan to study Western art. His mother sold the family house to pay for his trip and he arrived in Japan in the spring of 1921. He stayed there for only 10 months. Wang Yizhu, curator of the show, speculated that his money ran out and by then he clearly knew he could not be the kind of oil painter that he previously intended to be.

Shortly before leaving Japan, he found paintings by Yumeji Takehisa on a secondhand bookstall in Tokyo. The combination of sketches and poems in the book led him to think about another way of being a painter.

The two never met in their lifetime. In a 1946 letter to a Japanese friend, Feng was still asking about the possibility of meeting Takehisa one day, either in person or by letter, since “he has a great influence on me and my paintings.” But Takehisa died in 1934.

The books that once inspired Feng are now part of the exhibition. Feng Yu, Feng’s grandson, bought them after searching through hundreds of bookstores in Kanda-Jimbocho.

Exhibited together with the books are 50 pieces of Takehisa’s original paintings, designs and sketches borrowed from the Takehisa Yumeji Ikaho Memorial Museum in Japan. There are both early works that influenced Feng’s production and also some of his most typical works which later made him a representative figure of the “Taisho Roman” style prevailing in Japan from 1912 to 1926.

It is also the first time that Takehisa’s works have been put on show on the Chinese mainland. It took the curation team four months to convince the director of the museum to lend the works.

“Actually Takehisa’s works have never been taken out of Japan since his death in 1934,” curator Wang told Shanghai Daily. “The 82-year-old director knew nothing about Feng. He asked us many questions, some were not easy to answer.”

Finally one sentence tipped the balance. When he asked Wang what her dream was, Wang said she hoped to “let the two artists meet across time and space.”