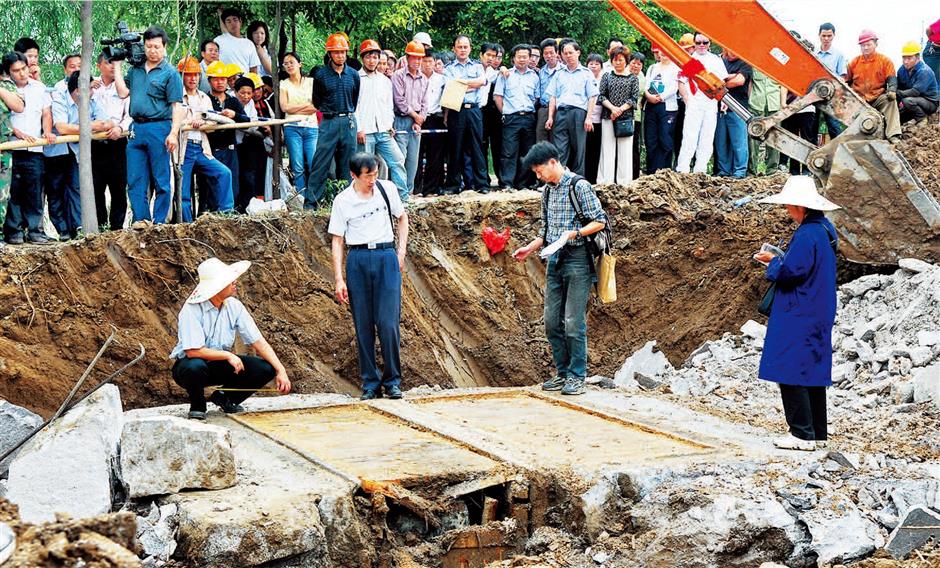 Inheritance is the deep foundation of culture and history. Enlightenment is an endless source that nourishes our long-standing cultural inheritance.

As a pearl in the vast cultural soil of Jiangnan — the region to the south of the lower reaches of the Yangtze River, cultural inheritance can be seen everywhere in Jiading, and the cultural relics unearthed here are the best evidence of Shanghai’s profound cultural heritage.

These historical relics are the pearls of memory for Jiading’s growth and development. Through them, we can link the past of Jiading with the present.

From the exhibited treasures, we have picked out five that show the exclusive character of Jiangnan culture.

Unearthed site: the intersection of Tacheng Road and Bole Road in Jiading in 1981 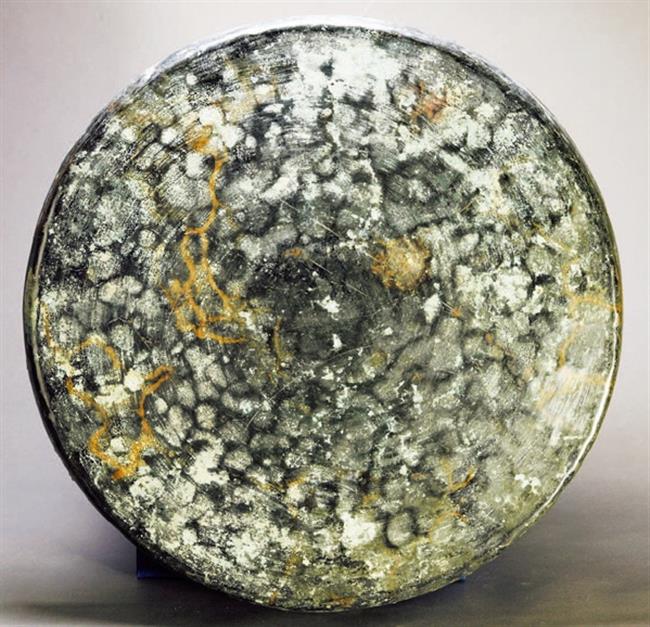 The bronze gong unearthed in 1981 in Jiading is inscribed along the edge with the inscription of “the third year of Qingyuan (1197) October 15 at the Spring Hall in Pingjiang Prefecture.”

Qingyuan is the first of the four titles of the reign of Emperor Ningzong from 1194 to 1224.

In 1217, Pingjiang Prefecture director Zhao Yansu and magistrate Wang Fei jointly lobbied the imperial court to establish a new county on the southeastern part of Kunshan to facilitate administration. They suggested naming the new county after Jiading, the last title of the reign of Emperor Ningzong.

On January 7, 1218, the imperial court approved Zhao’s and Wang’s submission and decided to establish Jiading County on the east side of Kunshan. The new county was under the jurisdiction of Pingjiang Prefecture.

As there was a Liucheng Town on the piece of land in the Tang Dynasty (AD 618-907), Jiading was also called “Liucheng.”

Jiading initially had 30,000 households and covered more than 1,200 square kilometers. It extended to the sea in the east, neighbored Kunshan in the west and was bordered with its north and south by today’s Liuhe River and Suzhou Creek. It wasn’t until 1725 that Jiading was put under the jurisdiction of Taicang City.

The bronze gong and local chronicles prove that Jiading was under the jurisdiction of Suzhou for a long time before and after its establishment.

Suzhou was once a key city in Jiangnan, and it was also the center of the Jiangnan society at that time.

Regardless of frequent change, Jiading has been bathed in the strong cultural atmosphere of Jiangnan for a long time.

Unearthed site: the tomb of Huang Mengxuan and his wife in Yuepu in 1958 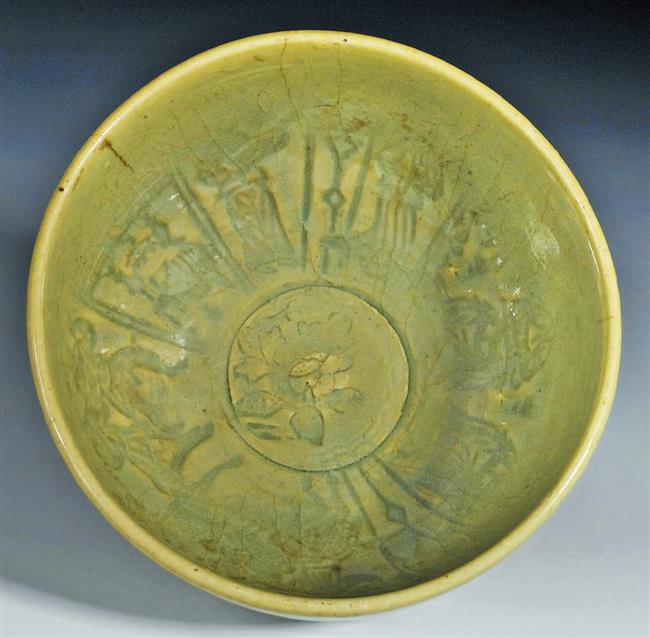 The pair of bowls was unearthed at the tomb of Huang Mengxuan and his wife in Yuepu, now in Baoshan District, as well as Huang’s epitaph, written by a native scholar Xue Ying.

The epitaph says Huang initially lived in east Jiading and later moved to Yuepu, which belonged to Jiading during the Ming Dynasty (1368-1644). The bowls feature a green glaze, round rims, arced bellies and raised bases.

Each has a thin glaze but thick body and looks shiny. At the bottom of the base, a circle of red flint can be seen.

At the time of discovery, there were two pieces of almost the same size, both wrapped in white cloth and placed in the coffin.

Unexpectedly, a pair of celadon bowls with the same decoration was found in a couple’s tomb in Suqian, Jiangsu Province, in 2012. One of the bowls is the same as the pair but with much clearer images.

The paintings on the bowl are all about the love story of Cai Yong and Zhao Wuniang. Cai was a famous scholar during the Eastern Han Dynasty (AD 25-220). The story tells the reunion of Cai and his wife Zhao after the couple went through hardships and it depicts the couple’s loyalty and filial piety.

This theme became popular in the late Yuan Dynasty (1271-1368) and early Ming Dynasty, and was widely depicted on the celadon wares from the Longquan Kilns.

This kind of bowls was a favorite collectable among the literati in Jiangnan at that time, which expresses Jiading people’s pursuit of loyalty, benevolence and filial piety, promoting a harmonious relationship between husband and wife. 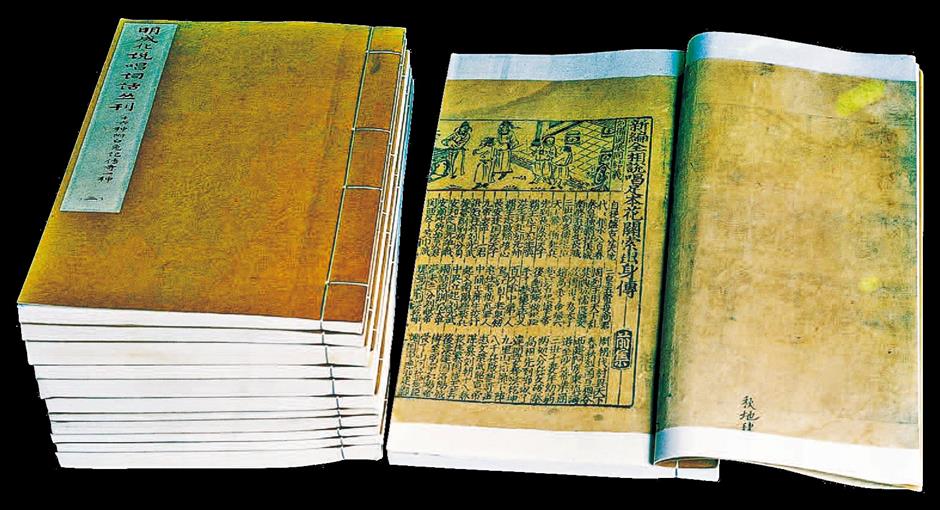 Twelve copies of storybook series from the Chenghua period of the Ming Dynasty were discovered when villagers flattened a tomb to build a pigsty.

The copies play an important role in the history of Chinese literature, opera and printmaking.

They are the earliest edition of the existing storytelling literature in China. The copies help people understand the early form of storytelling.

The illustrations are the earliest existing ones in storytelling books.

The early form of storytelling is mainly based on seven-word lines. Its performance is a combination of narrating and singing. The performer usually told a story through poetry.

Jiading has always had a tradition of storytelling, and the unearthed Ming Dynasty, Chenghua period storytelling series is the best proof.

With the rise of pingtan, a storytelling art in the Suzhou dialect in the late Ming and early Qing(1644-1911) dynasties, this art form, known as the regional cultural symbol of Jiangnan by scholars, spread along the Wusong River to every town and village in Jiading.

There were initially story theaters outside the west gate of Jiading old town in the late Qing Dynasty and more and more opened throughout the town after that. By the end of 1956, there were nine storytheaters in operation.

The rise of Suzhou Pingtan created an exclusive way of life for people in Jiangnan.

Drinking tea and enjoying the performance of pingtan in a teahouse or story theater became a major way for Jiading people to entertain.

The venues were also where they acquired knowledge and exchanged information in those days.

Unearthed site: the tomb of Zhu Shoucheng and his wife in Gucun in 1966 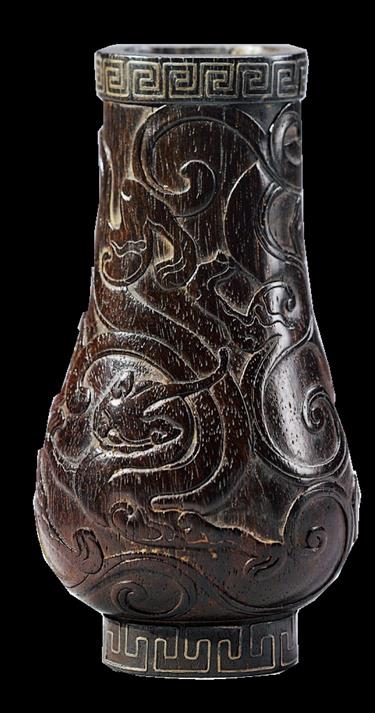 The shape of the flat flask follows the bronzeware of the pre-Qin period (2100-221 BC), but is more refined and elegant.

The flask features three dragons playing around a lingzhi (灵芝), or ganoderma — a medicinal mushroom, which was very popular in the Ming Dynasty.

The flask was unearthed from the tomb of Zhu Shoucheng, a renowned Jiading scholar during the Wanli period (1572-1620).

Along with the flask were inkstones, penholders, ink boxes, paperweights, rulers, stationery boxes, round boxes and many other stationery items and bamboo and wood carvings.

So it is believed the flask would have been an item in Zhu’s study when he was alive.

Woodcarving reached its peak during the Ming Dynasty. From the notes of the literati at that time, it can be seen that woodcarved items were mainly made in Suzhou and surrounding areas.

There are not only many workshops specializing in making woodcarvings in Suzhou and its surrounding areas, but also famous masters with various skills.

While the desktop collections were treasured for their practical use, they were also deemed as reflecting the owner’s character and the nobility and elegance of the literati at that time.

Jiading was under Suzhou’s jurisdiction during the Ming Dynasty. The flask undoubtedly shows the elegant engraving style of Suzhou during that period and the taste of the Jiading literati. 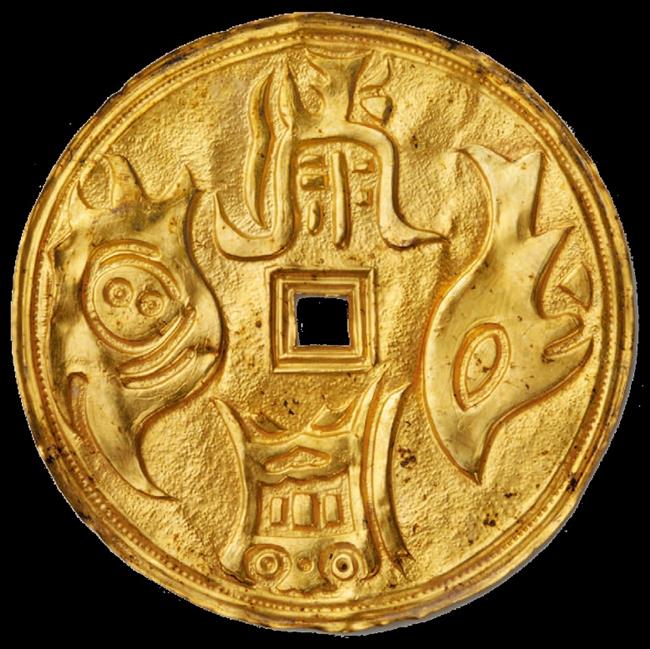 The round lucky coin with a square hole in the middle is made of gold, with Taoist symbols imprinted on both sides.

Lucky coins usually carry blessings and auspicious patterns imprinted on one or both sides.

They are not currency, but coin-shaped playthings.

Lucky coins have been made since the Han Dynasty (202 BC-AD 220) — people believe the “money” can serve gods and ghosts.

Casting lucky coins began with the worship of gods and totems by ancient people.

As society became stable and the quality of life improved, lucky coins were made for praying for longevity, promotion and good fortune.

People believed that wearing these auspicious coins had the function of praying for longevity, exorcising evil spirits and bringing fortune.

Due to the prevalence of Taoism in the Song Dynasty, casting lucky coins with the theme of promoting Taoism and the Chinese zodiac overwhelmingly dominated.

The Ming and Qing dynasties were the heyday of lucky coin casting and use.

During this period, almost all sectors of society used them. Both official mints and ordinary people cast lucky coins.

In southern China, most lucky coins were made by mints in Jiangsu and Zhejiang provinces.

The coins were made of high-grade copper, with exquisite craftsmanship and were popular with the people of the time.

The gold lucky coin unearthed from Li’s tomb in Jiading was put on the abdomen of the tomb occupant.

The Taoist symbols have the special meaning of “getting rid of calamity,” which not only applies to the daily life of the believers, but also blesses the deceased on their way to heaven.

Such a pattern is very rare on lucky coins, which reflects the folk belief in the Jiangnan area in the Ming Dynasty.