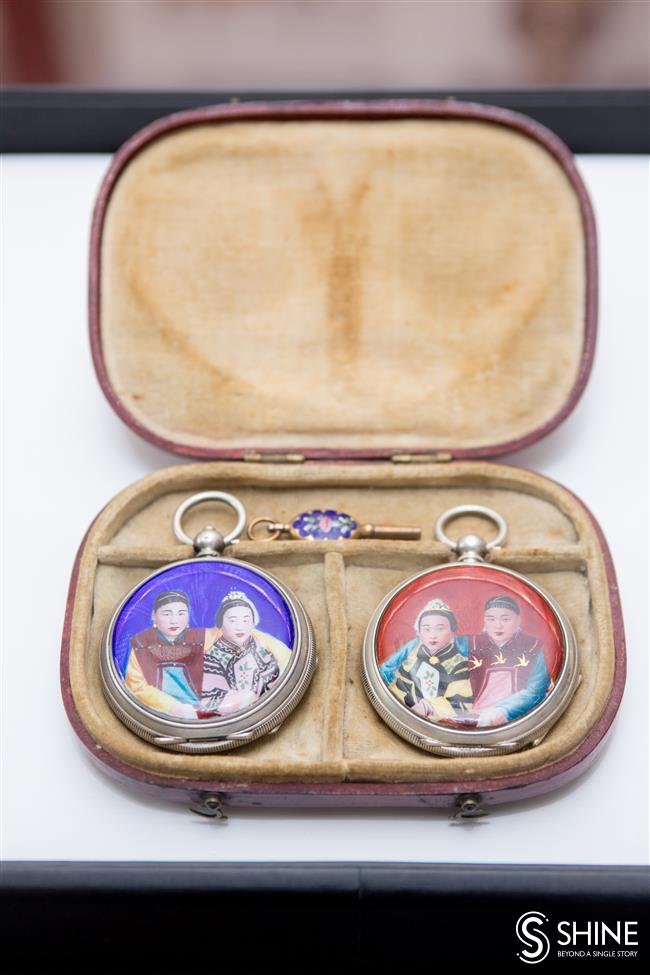 Tick-tock, tick-tock. A pink wristwatch and a Doraemon-shaped, bedside alarm clock were the timepieces of my childhood. Today, like most people, I rely on my mobile phone to tell the time.

But not all people are seduced by such modern technology. Some find comfort in the rotation of hands and the ticking sounds of passing seconds.

“Wristwatches and clocks are alive,” said Zhang Zhenghao, 48, a collector of antique timepieces. “They can move and produce sound. They are the carriers of time.”

Influenced by his father Zhang Ruijun, Zhang Zhenghao took an interest in clocks in his childhood. In the late 1970s, his father took him to a curio street market at People’s Square every Sunday morning to look for hidden gems.

Once a month in the 1980s, father and son took an overnight boat to Nantong in Jiangsu Province and then caught a bus to Taizhou. There they visited local antique dealers.

“I fixed clocks before collecting them,” said Zhang Ruijun, 78. “In the 1960s, when one of my alarm clocks stopped working, I decided to try to fix it. Unexpectedly, I had a lot of fun repairing it, and I gradually became interested in collecting antique clocks in the 1970s.”

The first clock Zhang Ruijun collected is a Nanjing clock, found in a farmer’s house in north Jiangsu. Set in elaborately carved rosewood, Nanjing clocks look like Chinese table screens. They were among the earliest clocks fully designed in China. As their name suggests, they mainly were made in Nanjing.

It’s said the clock was created by Ji Tanran in the late Ming Dynasty (1368-1644). In its heyday, Nanjing was home to more than 40 clockmaking workshops. The technique spread to the cities of Yangzhou, Suzhou and Shanghai in the Qing Dynasty (1644-1911).

“Generally, there are nine sizes of Nanjing clocks, ranging from 9 centimeters in width to 34 centimeters,” said Zhang Zhenghao. “The small one was placed in the boudoir; the larger one took pride of place in a reception room.”

Nanjing clocks, he said, have an auspicious meaning, symbolizing a lifetime of peace. Ancient owners placed them on a table in the center of the reception room, along with vases, which also signified “safe and sound.”

“The timepieces are the embodiment of human ingenuity,” said Zhang Zhenghao. “Although their function as keepers of time has faded, their value as vintage art objects continues.” 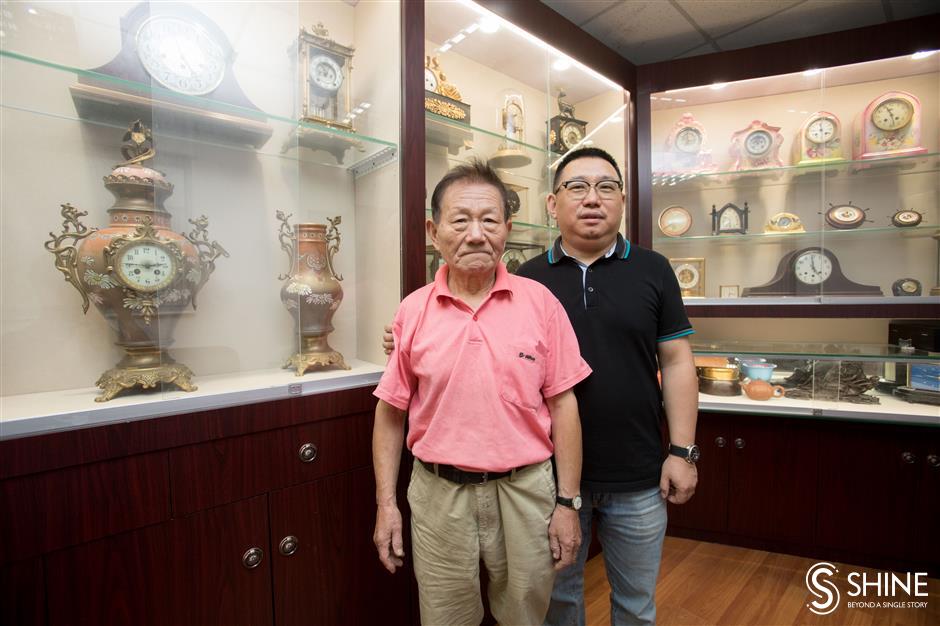 One of Zhang Ruijun’s favorite old clocks features ocean waves and eight small boats. The clock was made in Guangdong Province during the reign of Emperor Qianlong in the Qing Dynasty. It strikes the hours with the ring of 10 bells, and the boats and waves move with the melody.

“It is incredible that such an exquisite clock was made as early as in the Qing Dynasty,” said Zhang Ruijun. “I first saw it in the home of a friend in Fujian Province. At first, he wasn’t interested in selling it. I paid several visits to him and sent him gifts of hairy crabs. Eventually he agreed to sell it. It was broken, and I spent a whole month fixing it.”

Also in Zhang’s collection are pocket watches called dabajian because they combine Western clock mechanisms with Chinese art. They were specially made by Western factories for the Chinese market during the Qing Dynasty.

Catering to Chinese customers, the gilded caliber is composed of eight parts. Eight is a lucky number in Chinese culture because its pronunciation is similar to the word for “wealth.” The lids were often made of silver and decorated with enamel paintings.

“Men in ancient times often hung dabajian on the left side of their belts and snuff bottles on the right,” said Zhang Zhenghao. “Both items represented social identity.”

He showed me several unique dabajian. One of them features not only the 24-hour time system that we use today but also the traditional Chinese time system. 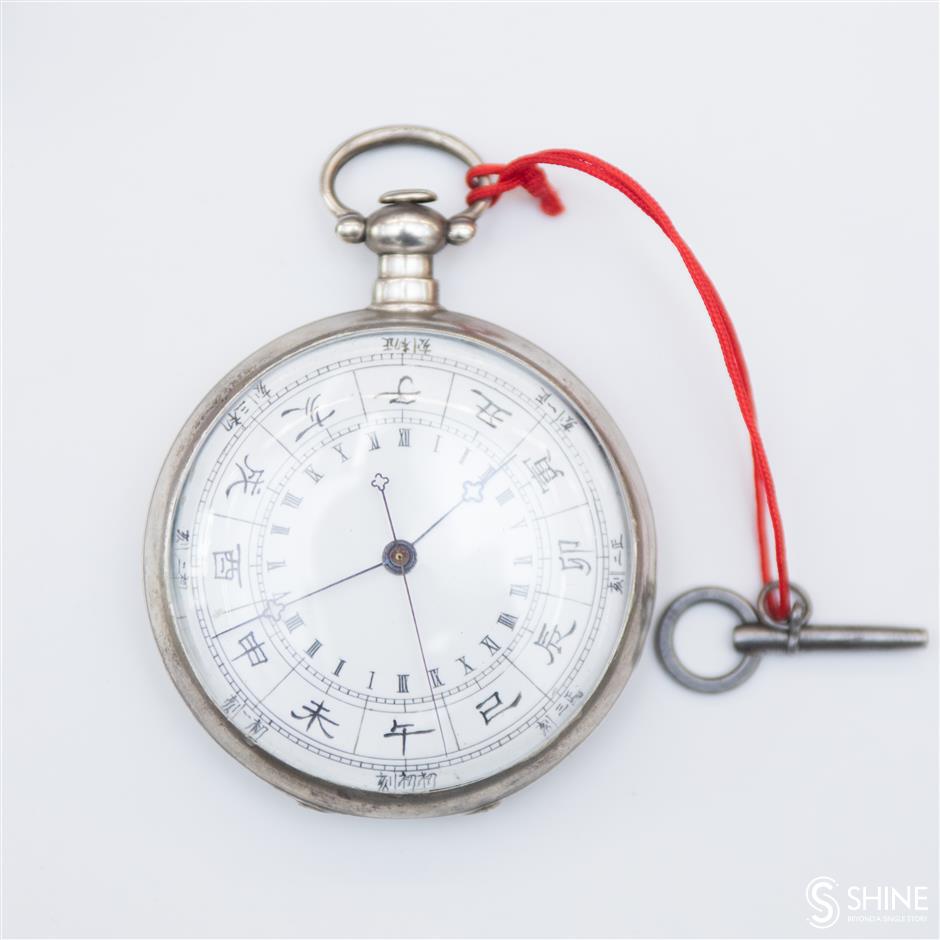 A dabajian features not only the 24-hour time system but also the traditional Chinese time system. 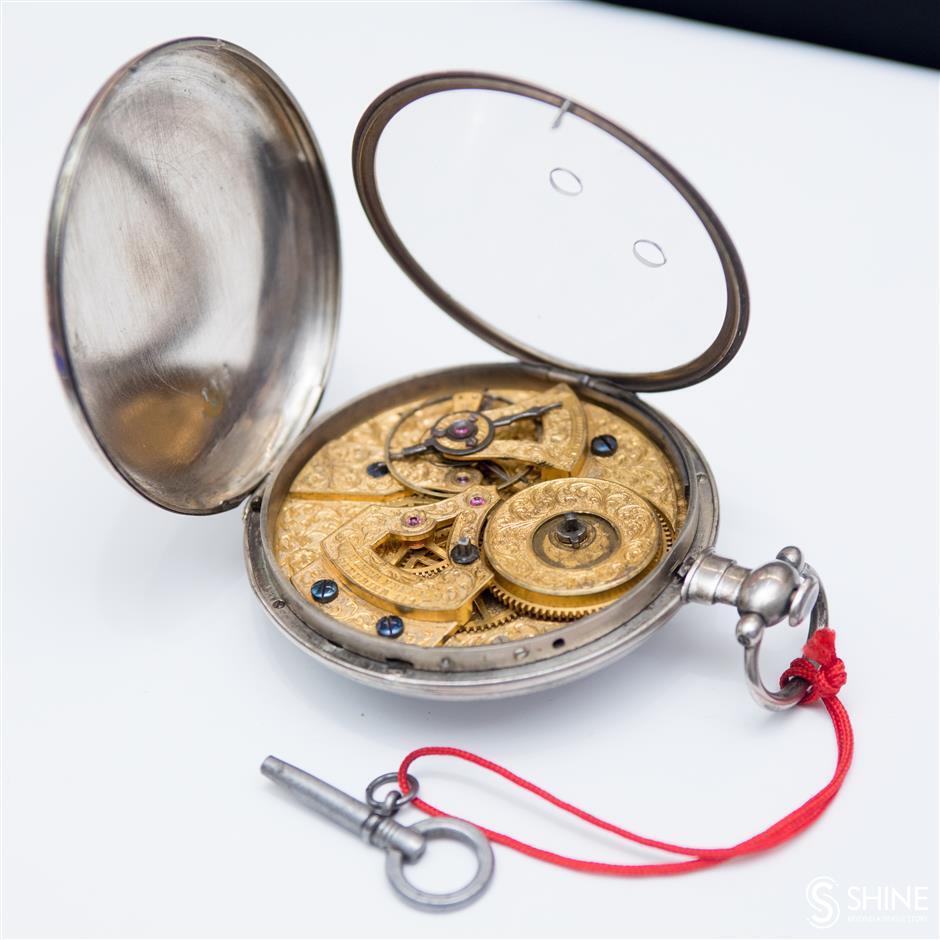 Western-style clocks were introduced to China during the late Ming Dynasty, when Matteo Ricci, an Italian Jesuit priest, visited the country. However, the long shadow of clocks can be traced back to as early as the Song Dynasty (960-1279). A polymath named Su Song (1020-1101) built an astronomical clock tower, which was driven by a large waterwheel, chain driver and escapement mechanism.

“The sound of clocks and watches varies according to their structures,” said Zhang Zhenghao. “My father and I can tell the type of a clock or a watch merely by listening to its ‘voice.’”

The elder Zhang still remembers his first watch. It was actually a woman’s watch handed down by his family members. He went to a watch repair shop and asked staff to move the mechanism into a man’s watchcase.

“I started working in 1958, when owning a watch was a big deal,” said Zhang Ruijun. “My workmates were intrigued by my watch.”

As the chairman of the Clocks and Watches Branch of the Shanghai Collection Association, Zhang Zhenghao has taken over for his father and runs an antique watch store in Huabao Tower in Yuyuan Garden Mall.

“I am very happy that my son shares the same hobby as me,” said Zhang Ruijun. “That’s rare in collector circles.”