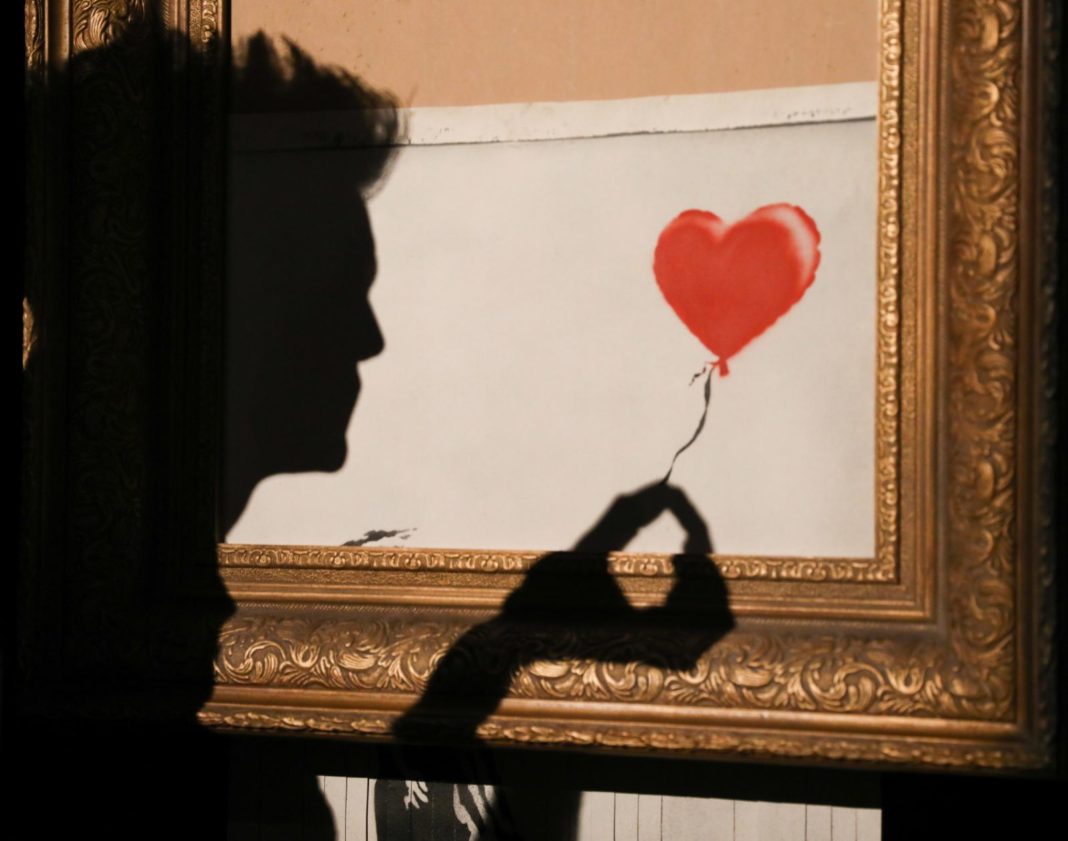 Over the weekend of October 13 and 14, more than a thousand people entered Sotheby’s in London to view the result of what is now arguably one of the most spectacular moments of contemporary art.

But prior to the $1.3 million London sale of the work—originally entitled Girl with Balloon and subsequently declared a new work called Love is in the Bin after half the canvas was shredded by a device hidden in the frame—another spectacle questioning the capitalist underpinnings of the art market had already taken place in Asia.

Orchestrated by Sotheby’s Hong Kong, Xuzhen Supermarket, a piece of conceptual art, sold for more than HK$2 million (US$256,000) at the end of September. The work is a replica of a typical city convenience store in China stocked with goods that look like the real thing, but are empty. Spectators are invited to browse the shelves and buy the containers, sold at the same price as the real ones available at regular stores. The anonymous buyer of the work at the auction, just like the shoppers who have bought the empty goods, has bought nothing but the concept and the exclusive right to commission the Shanghai-based artist Xu Zhen to recreate the artwork.

“Are you buying an artwork? Or are you just buying empty boxes? ” said Xu in an interview with Quartzy, after the sale. “The process of exchange is part of the work.”

The evils of the art market

Although the two artworks are very different in terms of ideas, execution and medium, their auction sales have raised the question of how to value art like this. Are these works really worth hundreds of thousands of dollars or are they just the art market’s version of The Emperor’s New Clothes that no one wants to call out?

Sotheby’s called Banksy’s prank “the first artwork in history to have been created live during an auction,” making “instant art world history.” Some applauded the grand statement, which if it had gone as planned (video) would have turned an expensively purchased piece of art into paper ribbons instead of a partially shredded work. Others, like Jerry Saltz, senior art critic of New York Magazine, have mixed views. While he praised Banksy’s prank for “disrupting the flow of capital if only for an evening”—it happened at the moment the work went under the hammer at auction—he also criticized Sotheby’s in a tweet: “100% bogus. Nothing to do with art.”

“The art market is based on the ownership of objects,” the 54-year-old told Quartzy. “Art is supposed to be the most liberal and open to new development in society, but in fact it’s controlled and owned by a pretty conservative bunch of people who are still obsessed with owning objects.”

What might seem at first brush like critiques of the art world might actually be a concerted way for auction houses to appeal to a new generation. Earlier, art auctions and the previews around them were a way for collectors in the region to learn about art, filling a need created by a lack of museums and galleries. But more recently, auctions have had a hard time building a following among the younger wealthy who aren’t as interested in paintings and sculpture by acknowledged masters.

Younger collectors haven’t been coming to auctions for some time, says Yuki Terase, Sotheby’s head of contemporary art, Asia. “They would rather go to Basel or Frieze,” she said, referring to two prominent art fairs—Art Basel has shows in Basel, Switzerland, Miami Beach in the US, and Hong Kong; Frieze runs four art fairs including in London and New York.

“We have been dealing with similar names, similar works, for quite a long time,” said Terase, who believes hard-to-pin-down work like Xuzhen Supermarket could help draw back a group said to prioritize spending on experiences like travel over objects. After its sale was announced, Terase said there was a surge of interest from younger collectors at previews ahead of the auction.”They were fascinated when they learnt that we were putting this up for sale at an auction, because this is not an easy no-brainer that we are offering,” said Terase. “But we want to stay relevant.”

Servais, the collector, says he believes that with the popularity of the concept of the “sharing” economy, symbolized by Uber or Airbnb, owning objects isn’t what’s going to drive younger collectors. “It’s an evolution that challenges the art market of tomorrow.”

For Xu, his work is a mockery of the consumerism and capitalism experienced by people in China every day. From the act of buying empty packages on the shelves to the auction of the concept, participants’ own experiences are part of the work, according to the artist.

Xu said his work isn’t all that different from startup companies seeking investments from venture capital, where many were only selling an idea or a concept in the hope of finding someone who buys into the idea. “If you follow this logic, we are just like looking for a VC. And the VC [the buyer of the artwork] can sell their ownership to someone else,” he said.

But though people may want to experience this kind of work, owning a critique of capitalism is another thing. Chong Zhou, a 29-year-old entrepreneur and art collector based in Shanghai, said that while he respects others who collect conceptual art or performance works, he has no plans yet to include such works in his collection, which consists mostly of Asian contemporary art by artists from 1975 to the 1980s.

“Preservation and presentation of an artwork are important factors when considering a purchase. How to present an artwork meaningfully in a space can be challenging,” he said. “And the ‘concepts’ of some of the conceptual works… I feel that they are either just jokes or being unprofessional.”

While Banksy’s shredded artwork feels wildly original, it’s not an entirely new idea. In the early 1960s, artist and political activist Gustav Metzger already coined the term “Auto-Destructive Art,”where destruction was part of the creative process of an artistic work and was seen as anti-capitalist and anti-consumerist.

Around the same time, artworks that exist as a concept or a ephemeral, time-based project were developed, and some of them stand the test of time. In 1987, Christie’s sold Ten Thousand Lines About 10 Inches (25 cm) Long, Covering a Wall Evenly (1971) by American artist Sol LeWitt, the first conceptual artwork sold at an auction. Dealers such as the Berlin-based Esther Schipper brought Tino Sehgal’s Ann Lee and Marcel (2016), known as a “constructed situation,” to Art Basel in Switzerland in 2017. Hong Kong collector Alan Lau donated Sehgal’s Guards Kissing to M+, the new visual culture museum scheduled to open in West Kowloon Cultural District in Hong Kong in 2019.

Servais himself owns a few such works. One of them is Josh Kline’s Sleep is for the Weak (2011), which consists of three French press coffee makers containing liquid made of Red Bull, DayQuil, and Coke Zero, and “infused” with Vivarin, Dentyne Ice chewing gum, and ibuprofen—a commentary on what young people take to keep them going over a clubbing weekend. He has to re-do the liquid mix himself every few days as the liquid is degradable. The work may not fit with many people’s perception of a high-value piece of art, but to Servais, it represents the kind of profound idea that he likes to collect.