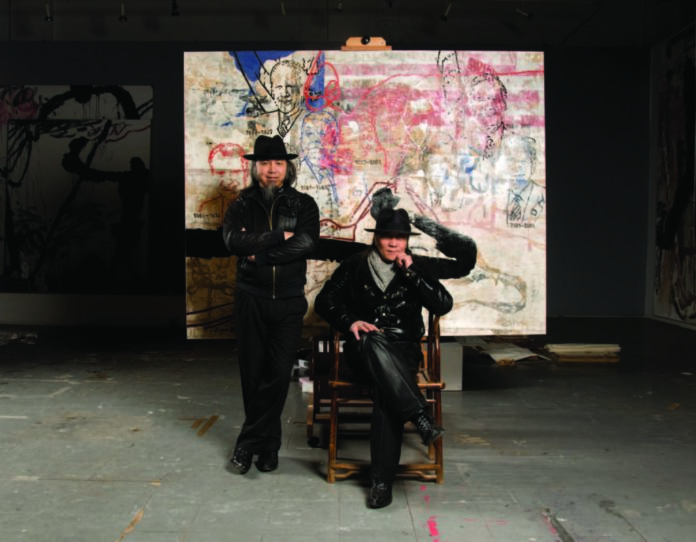 Tomorrow, October 16th, is officially Zhou Brothers Day in Illinois. In 2014, the state’s governor dedicated the day to the Chinese American contemporary artists artistic duo, who founded the Zhou B Art Center in Chicago on the same date a decade earlier.

Now, as the center prepares to celebrate its 14th anniversary, the opening of its new exhibition, and a handful of big projects outside of Chicago, the Zhou Brothers are looking back at the center’s impressive growth over the past 14 years.

Shanzuo Zhoushi and Dahuang Zhoushi, who have been collaborative art partners for over 45 years, were born in China’s Guangxi province in 1952 and 1957, respectively. They began their careers as artists in 1973, and since then, every single work of art they’ve created—be it abstract painting or sculpture—they’ve created together. They’ve also lived with each other nearly their entire lives, and still do today, residing in Chicago’s Bridgeport neighborhood. It’s the same place they’ve been since emigrating from China with only $20 and two suitcases in 1986. The Zhou Brothers walking along the Great Wall of China. Courtesy of the Zhou B Art Center.

In 1992, the brothers, already well-established artists at that time, founded the Zhou Brothers Foundation. Twelve years later, in 2004, they fulfilled their long-held dream of opening their own contemporary art space, converting a five-story, 87,000-square-foot warehouse into, as they put it, a “playground for artists.” Today, the center is just that, providing studios, exhibitions, a residency program, and other resources to a local community of creatives.

The idea for the center grew out of the brothers’ teaching practice. After lecturing at schools like the London International Art Academy, the Salzburg International Summer Academy, and the Kunstakademie Bad Reichenhall in Germany, they found that students were hungry for space—physical and intellectual—to create and think about art.

“Every time the classes finished, all the students stayed together to discuss art,” said the brothers—who, not surprisingly, chose to answer artnet’s questions in the same way that they do most things: together. “At this point in our artistic journey, we realized how important it was to create an environment for artists to gather and foster each other’s creativity. This kind of special atmosphere seemed like a rare commodity in a world where commercial developers make many areas in modern cities too expensive for artist communities to thrive. We imagined an environment created and kept solely for artists, and decided this would be our dream.” The main tenets of the brothers’ practice—a collaborative spirit, a DIY impulse, an eschewing of traditional boundaries of genre and discipline—are also at the center’s foundation. Embodying all of these principles is the center’s signature event, a free, public exhibition on the third Friday of every month. “That’s our secret sauce, in a way,” says Michael Zhou, the executive director of Zhou B Art Center, referring to the center’s adoption of the Zhou brothers’ principles.

Today, he says, the center is as much a part of their practice as painting or sculpture. “For the past 14 years, the Zhou B Art Center has been part of the Zhou Brothers’ brand as well as their artwork itself. It’s their way of giving back to the art world in Chicago and Bridgeport.”

It’s come a long way since its founding. When the brothers launched the space in 2004, notes the director, there was no business plan, no sense of budget—just an ideological drive. “It’s been a long journey,” he says. “Back in 2004, not many people understood the brothers’ mission. For two contemporary Chinese artists to convert a long-abandoned, 87,000-square-foot warehouse into a ‘playground for artists’? The city must have thought they were crazy.” The future home of the Zhou B Art Center in Kansas City, Missouri.

Fourteen years later, they certainly don’t seem crazy anymore. The Zhou B Center has become a staple of the Chicago art scene and an important resource for young artists trying to make their mark. This week, it opens its new exhibition, a show of new paintings by Chicago-based muralist Jeff Zimmermann titled “Everything.”

What’s more, the center is expanding. This December, in partnership with Guangxi University in China, the brothers will open a Zhou B Art Academy in Kansas City, Missouri.

“Art education is going to be one of our main focuses moving forward,” the brothers explain. “Our Kansas City location will become a home for cultural exchange to scholars and students from China and the US. Long ago, we realized how important a stage and a platform could be for artists. Being an artist can be a lonely journey, but when a group of artists are under the same roof, that creates a great synergy. The point of creating an art center is not only just to provide a space, but to create a community that is strong and has everyone’s back.” A rendering of the Zhou Brothers’ Gate to Wisdom sculpture. Courtesy the Zhou B Art Center.

It’s the first in a series of ambitious plans that will see the Zhou Brothers’ message extending to other parts of the globe. And the following one is just as big.

Next year, the brothers are returning to the place they were born, the Guangxi Province, to install a new, large-scale public work near the Huashan Cliff Paintings, which were recently named a World Heritage Site. A 226-foot-tall stainless steel sculpture called Gate to Wisdom, the work depicts a figure standing wide-legged, its arms extended triumphantly outward, signaling the sacredness of the area.

Jeff Zimmermann’s solo show, “Everything,” is on view from October 19 through November 10 at the Zhou B Art Center.