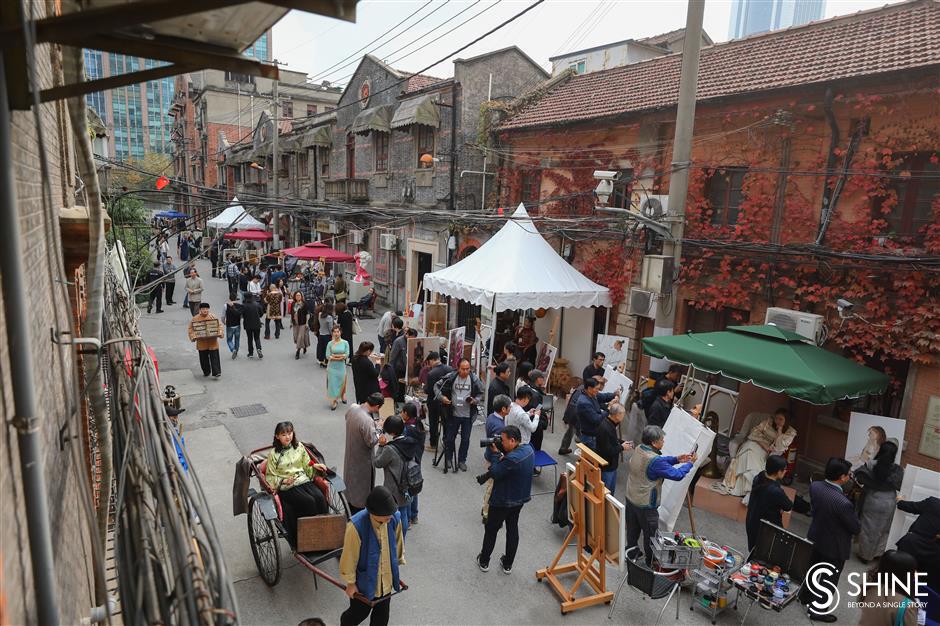 An old-fashioned street light in Zhangyuan, where the city’s first electric light bulbs flickered on in 1886, was lit anew to mark the opening of an immersive painting exhibition.

The weeklong activity invited a group of famous painters, including Feng Yuan, Yu Xiaofu and Chen Yiming, to join young artists and students in depictions of historical neighborhoods.

“Immersive painting itself is a kind of performance art,” said Yu, curator of the exhibition and an oil painter. “Sketching is a type of traditional art, while the form of this immersive activity is contemporary.”

Three years in the planning, the event was aimed at enhancing public understanding of Old Shanghai through art.

Sandwiched between Weihai and Wujiang roads, Zhangyuan is one of the city’s best-preserved historical communities. The area, dating back to 1872, was initially purchased by British merchant Groom Francis. A decade later, Chinese entrepreneur Zhang Shuhe took over the property and transformed the garden villas into a place of public congregation.

Known as “the first public space in modern China,” the neighborhood is a living museum, displaying diversified historical architecture, from shikumen, or old stone-gate residences, to garden villas.

A foreign model wearing a blue robe decorated with Chinese patterns sat on a chair against a backdrop of gray bricks and red wooden window frames. A gentleman was drawing a portrait.

The painter was Chen, the younger brother of the late artist Chen Yifei. He was wearing a tailored suit, a trench coat and a chic hat.

All the painters and models are required to wear retro clothes with vintage accessories. 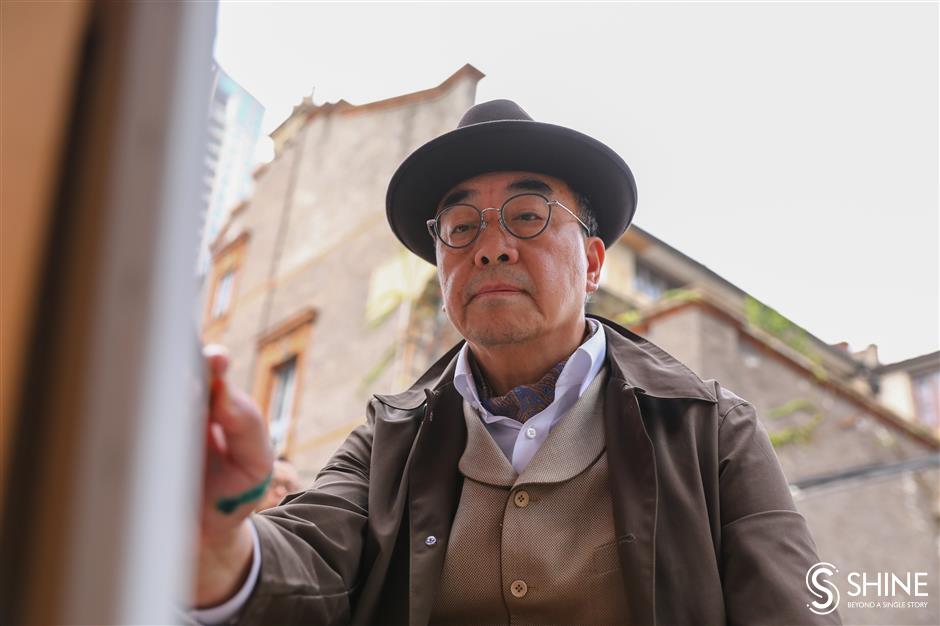 “It is my first time participating in such an activity, and I feel very excited,” said Chen. “We painters are used to wearing casual clothes while painting. It is rare to see so many painters dressed in formal attire.”

Born in 1951, Chen was raised in Huangpu District. He said he often revisited the historical neighborhood after returning home from the United States.

“Many scenes from my elder brother’s film ‘Evening Liaison’ were shot in Zhangyuan,” Chen said.

In the No. 72 building, known as the “reception hall” of Zhangyuan, there are many photos featuring the two brothers. With a mix of traditional Chinese and Western-style decor, the house and many nearby buildings bear witness to the more than 100-year cultural diversity of the area.

The foreign model, named Suhbat, was an overseas student from Kyrgyzstan. The 20-year-old student was invited to the event by his teacher at Shanghai Normal University.

“The neighborhood allows me to get a glimpse of Old Shanghai,” Suhbat said. “And I like wearing traditional Chinese clothing.”

The immersive activity featured a rich stock of vintage Chinese items, such as an antique clock, a cane chair, a wooden cabinet and a lantern — all placed in the alleyway to inspire the artists. 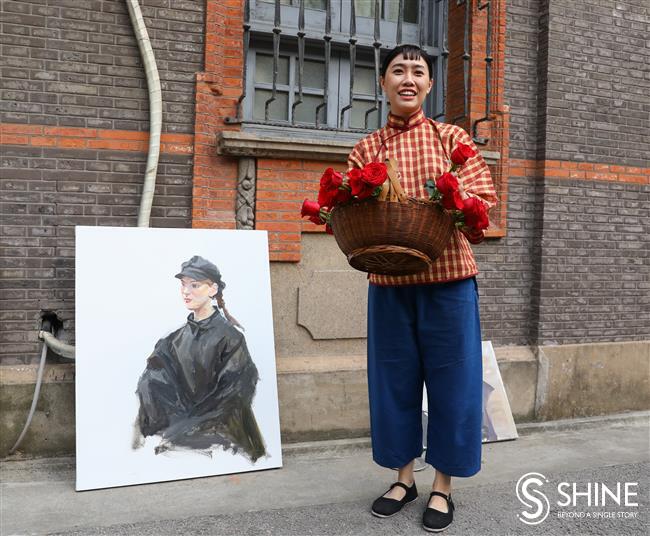 A girl sells flowers beside a painting.

The exhibition’s opening ceremony took visitors back to yesteryear. In that journey, they could see stalls selling wonton and tofu, vendors peddling cigarettes, a rickshaw driver and women dressed in elaborate cheongsam.

Speaking in authentic dialect, the actors were from the Shanghai Farce Troupe.

“For many people, shikumen is one of the icons of Shanghai,” said Li Zechen, born in 1995. “Although the living space was limited, the relationships within the old community were close.”

On the opening day of the exhibition, Li played the role of a vendor selling tofu.

“Although I am young, I have strong feelings for Old Shanghai,” said Li.

“It is rare to see such well-preserved historical neighborhood in the city center.”

On the last day of the activity, I encountered a man observing the painters carefully.

“I am also a painter, but my style is different from these artists,” said Feng Zhonghao, 31. “My works are more contemporary.”

Feng said he was born and raised in Zhangyuan. Although he no longer lives there, his old home has been transformed into his studio. Two paintings of Zhangyuan hang on the wall, along with some antique Western paintings and contemporary artworks created by Feng.

“I like Zhangyuan,” said Feng. “This house, with its high stories, good light and historical atmosphere, is an ideal place for painting.”

Although the festival event has ended, the paintings will be displayed in an exhibition in an art center at 1684 Xinzha Rd next month.

Running through the end of the year, the exhibition will also feature a number of porcelain artworks on a Zhangyuan theme.