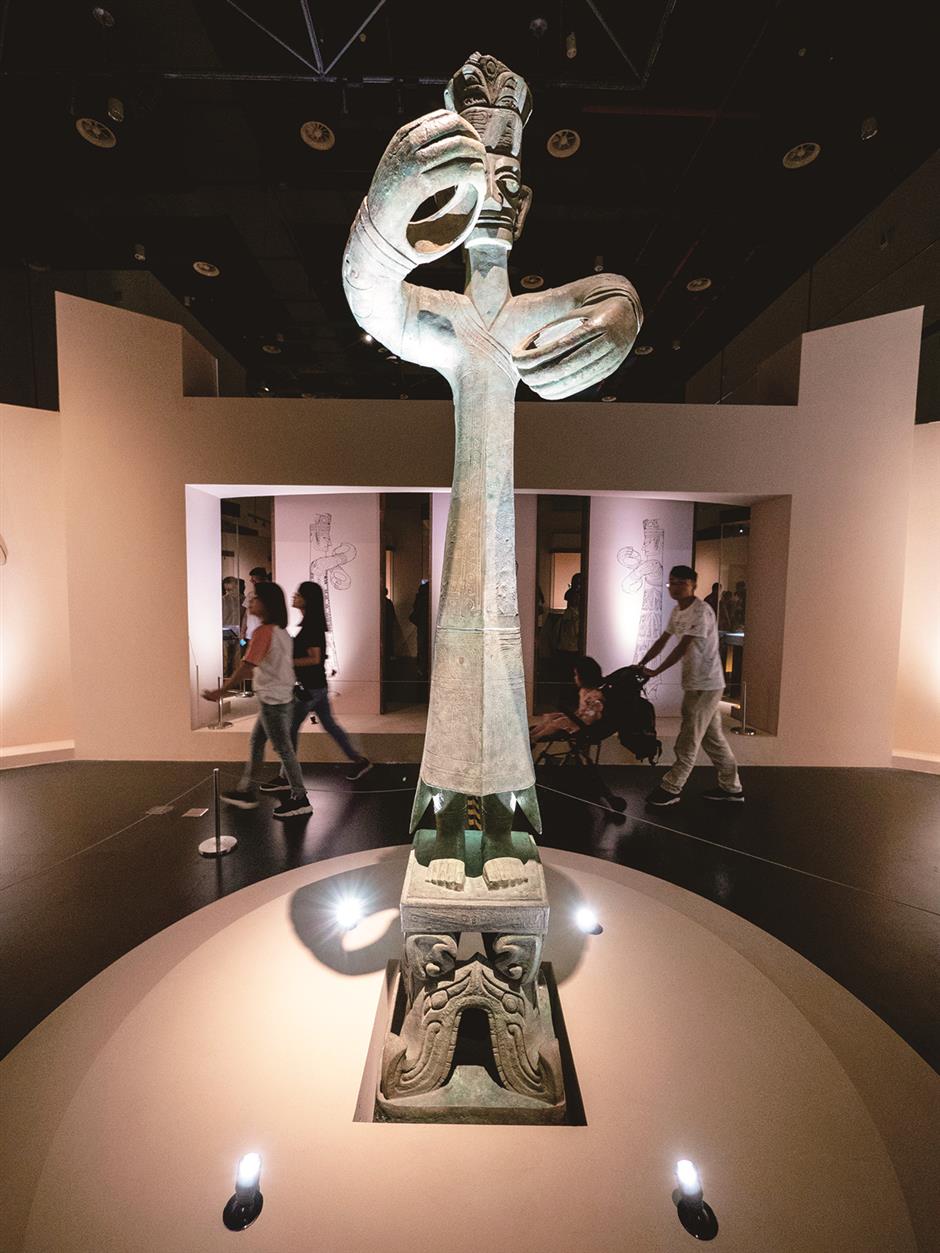 Among China’s ancient bronze figure statues, one unearthed in the archeological site of Sanxingdui in Guanghan, Sichuan Province is the largest and the earliest of its kind that has been found so far.

It is said that someone would like to pay 1 billion pounds (US$ 1.26 billion) for the remarkable artifact when it was exhibited in Britain. As a national treasure, it is priceless and of course can’t be exchanged.

The figure with bushy eyebrows and big eyes stands barefoot on the two-layer square base. Wearing a tall and lotus-styled hat, two anklets and three pieces of thin clothing, the figure looks animate and dignified.

The inner cloth like a swallow-tail coat is so long that reaches the man’s shanks. The interlayer just covers his knees, and the outer cloth is further shorter with belly-button length. All the clothes are decorated with elaborate patterns.

Who is this mysterious and wired man? Through its upright figure and exquisite clothing, there is no doubt that he is a big shot. There are mainly two versions of his identity.

Some experts believe that he is a wizard whilst others think that he is an acclaimed king. But no matter who he is, the statue is certainly used as a ritual object.

The 2.62 meters tall bronze statue was excavated from Sanxingdui, which is a major Bronze Age culture dating back over 4,800 years. It is generally identified as part of the ancient Shu state along with the Jinsha site and joint tombs of boat-shaped coffins in Chengdu, Sichuan Province. The three sites are on UNESCO’s list of tentative world heritage sites.

From the site covering around 12 square kilometers, archeologists discovered over 1,700 unique bronze, lacquer, jade and pottery wares, 80 ivories and more than 4,600 coins of that time.

The preliminary finding was conducted in 1929. One day, a farmer named Yan Daocheng brought his son to a ditch where they intended to install a waterwheel. Digging hard, they found a hole where there was a faint light.

The father and son went into the hole. To their surprise, there was a rectangular tunnel, and the space was stuffed with jade wares, jade pendants and jade knives.

Yan knew that these artifacts were not something ordinary. He carefully sealed the hole and returned home stealthily.

After dark, Yan came with his family members to the hole again. Preparing for pack baskets and ropes, they took away over 400 jade wares which were hidden in every corner of Yan’s house. Yan urged his family not to tell anyone about the finding.

One year later, Yan sent one of the jade wares to a military officer named Tao Zongbo in Guanghan. Tao didn’t take the artifact seriously until an antique dealer saw it and was amazed by the rare treasure.

Using military training as an excuse, Tao sent armed forces to the place where Yan discovered the treasures. The farmers knew Tao’s real purpose but dared not to stand up to him. Instead, they secretly spread the rumor that Tao had found countless treasures.

Digging for eight days, Tao gained nothing. Returning to the barrack, Tao met several his superiors and swore that he hadn’t found anything, which was disbelieved by the visitors.

Before long, Tao lost his rank.

In March 1934, Luo Yucang, head of Guanghan, invited Ge Weihan, curator of West China University (predecessor of Sichuan University) Museum, and American professor David Graham to excavate the site. It was the first time to conduct a formal excavation of Sanxingdui.

In the midst of chaos caused by wars, the excavation only last for around 10 days. More than 600 artifacts were discovered during the period.

In July 1986, two workers of the Lanxing Second Brick Factory accidentally found a jade artifact in the area. After receiving the news, a group of archeologists rushed to the scene which was known as the first sacrificial pit.

About one month later, the second one was found and the bronze figure statue was exactly unearthed in the pit.

But when it was first discovered, it didn’t look like what we see now.

The bronze statue was out of shape and broken into pieces.

A group of seven experts of National Museum of China took charge of the restoration. They decided to adopt the method of soldering and brazing to join the pieces.

Under their efforts, the figure finally stood up.

However, a piece of bronze sheet was missing from the back of the bronze statue. The experts imitated a piece of the same color but without patterns. They thought that it was necessary to leave traces of history.

A miracle happened six years later. In 1993, when the repair work of the Sanxingdui cultural relics was completed, the experts found a bronze sheet, which was exactly the missing part of the bronze figure statue. The national treasure is now displayed in the Sanxingdui Museum in Sichuan Province.