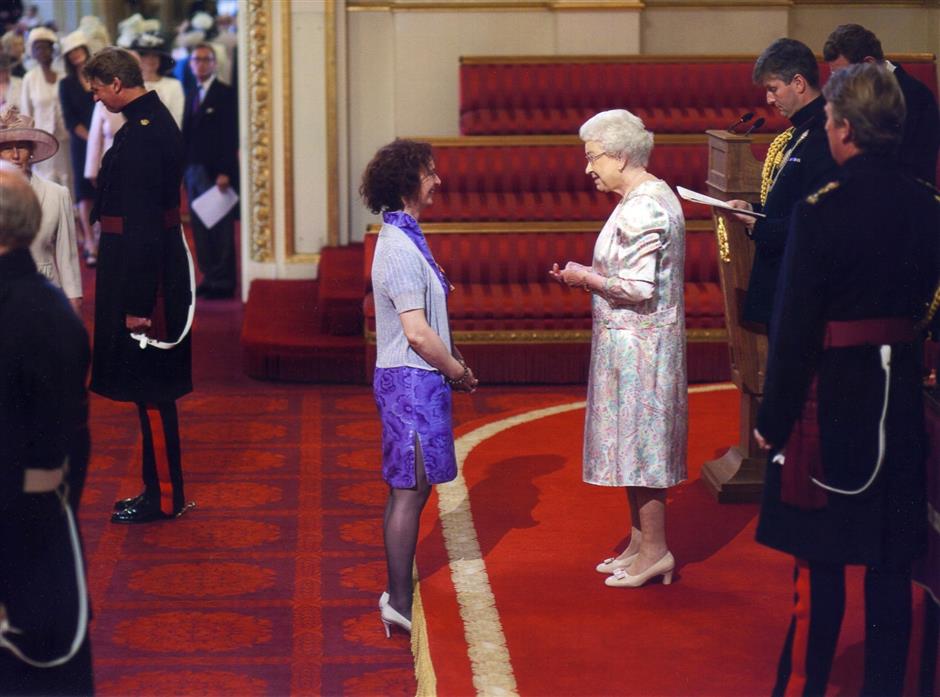 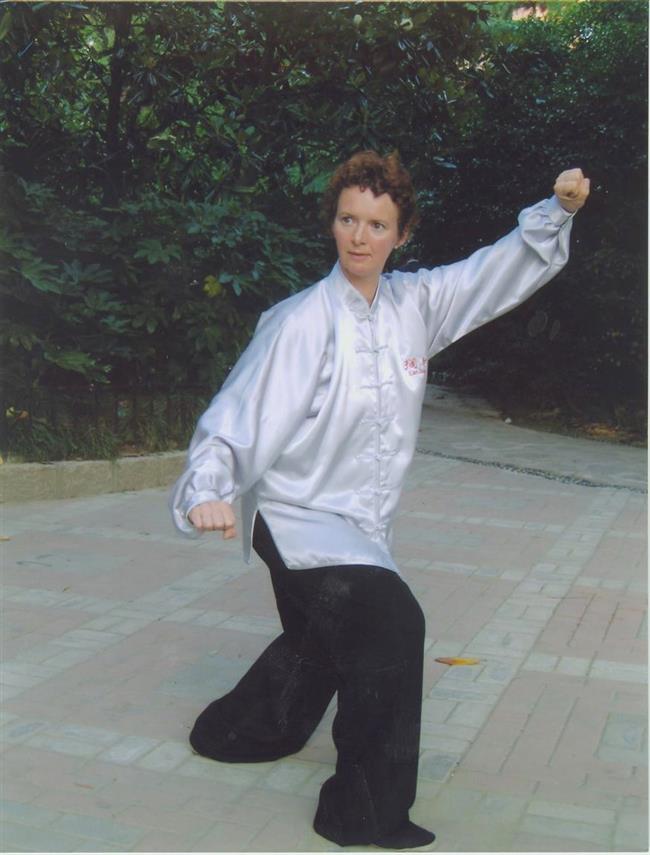 Rose Oliver practices tai chi, which she teaches to anyone interested at Caoyang Park in Putuo District.

Rose Oliver found herself telling an English friend in a Shanghai restaurant not to worry about the group of old Chinese men at the next table seeming to be arguing.

She explained they were actually having a really good time. Minutes later, when they really started arguing over cards, Oliver showed her friend how the tone and dynamic had changed.

The incident was one of many times when she tried to bridge the gap of understanding between people from different cultures. Sometimes with a friend, and many times through her cultural exchange workshops in China and abroad, based on her 19 years in Shanghai, and even longer living and breathing Chinese culture when she was studying and teaching tai chi in the UK.

“We have so many similarities, but also some differences. By knowing where the differences lie, you can have a proper dialogue,” the 54-year-old English teacher at Shanghai University and founding president of Shanghai-based Double Dragon Alliance Cultural Center told Shanghai Daily.

“I hope I can be this kind of bridge to help bring people close together.”

For many, Oliver, known to her Chinese students and friends as Wang Meigui, the Chinese for rose, was that bridge. She is the English lady teaching tai chi to Chinese at Caoyang Park in Putuo District. She is the local expert who brings groups of foreigners to the local communities and encourages them to interact with each other. She is also the workshop organizer or friend who slowly adds more adventurous Chinese food to your diet. 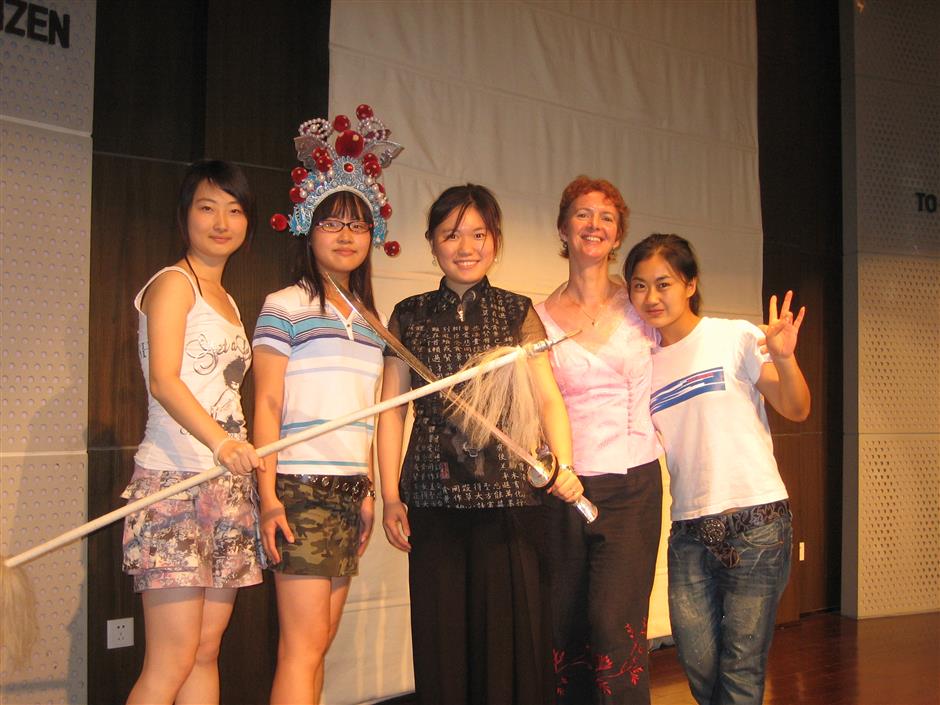 In 2011, she was made an MBE (Member of the Order of the British Empire), and in 2013 was presented with a Magnolia Silver Award by the Shanghai government. This year, she was awarded the Magnolia Gold Award.

Oliver remembers well the short exchange with the queen when she went to Buckingham Palace for her MBE award. The queen had visited Shanghai and wondered what changes Oliver had witnessed. She was also curious about Oliver’s work in Shanghai and said it was very important.

“You must keep on,” the queen told her as Oliver was standing in her purple qipao, specially made for the occasion because she loves sharing and showing Chinese culture.

Her fascination with Chinese culture began around the age of 7 or 8, from Bruce Lee and a TV series adapted from classic Chinese novel “The Water Margin.” Oliver and her older brother started roleplaying the heroes from the series, who they considered to be parallels of Robin Hood.

In her early 20s, Oliver was suffering from a back injury and looking for a new exercise regime when she spotted an advertisement for tai chi in a library in East Anglia. So she began her passion for the martial art, and there she met her American instructor and later husband.

When the couple started a tai chi school working with communities and adult education programs in the East Anglia region in 1994, the activity was slowly making its mark in the UK. 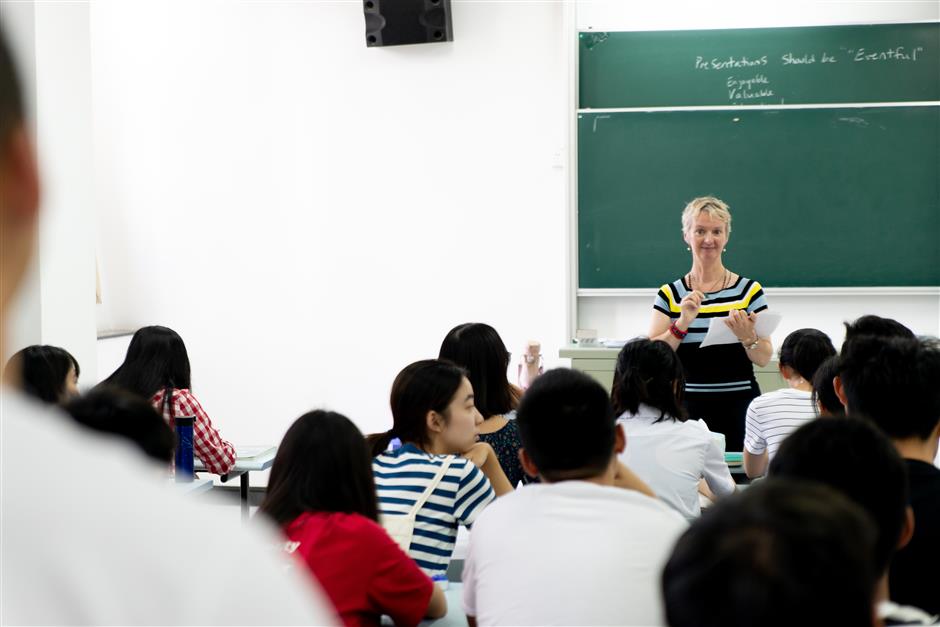 “At that time, there were pockets of interest for tai chi around the country, but it didn’t have such a wide base of support like today,” she said.

“Now it has the support of the National Health Service, and many medical studies around the world and many more people recognize it.”

The NHS website recommends tai chi and qigong, another ancient Chinese exercise system, for their health benefits, citing studies showing that tai chi can “help people aged 65 and over to reduce stress, improve their posture, balance and general mobility, and increase muscle strength in the legs.”

In 2000, to further their research and understanding of tai chi and the Chinese philosophy it embodies, Oliver visited Shanghai for the time, with a plan to stay for at least five years.

Though it was a first visit, she had heard quite a lot about the city and the country from Chinese tai chi instructors the couple had met over the years. There were some unexpected issues — smoking wasn’t banned indoors yet, her bikes were stolen a few times, and it confused her at first when cyclists were riding on both sides of the street, amidst other things that first-timers may have experienced. But nothing really turned into a culture shock, rather, she quickly merged herself into the local community.

“It looks like chaos, but it’s organized chaos,” Oliver laughed about her early days in the city and said so much had changed since then.

The city was developing so rapidly she sometimes felt culture shock when going back to the UK or the US, both of which she regularly visits to see relatives and friends.