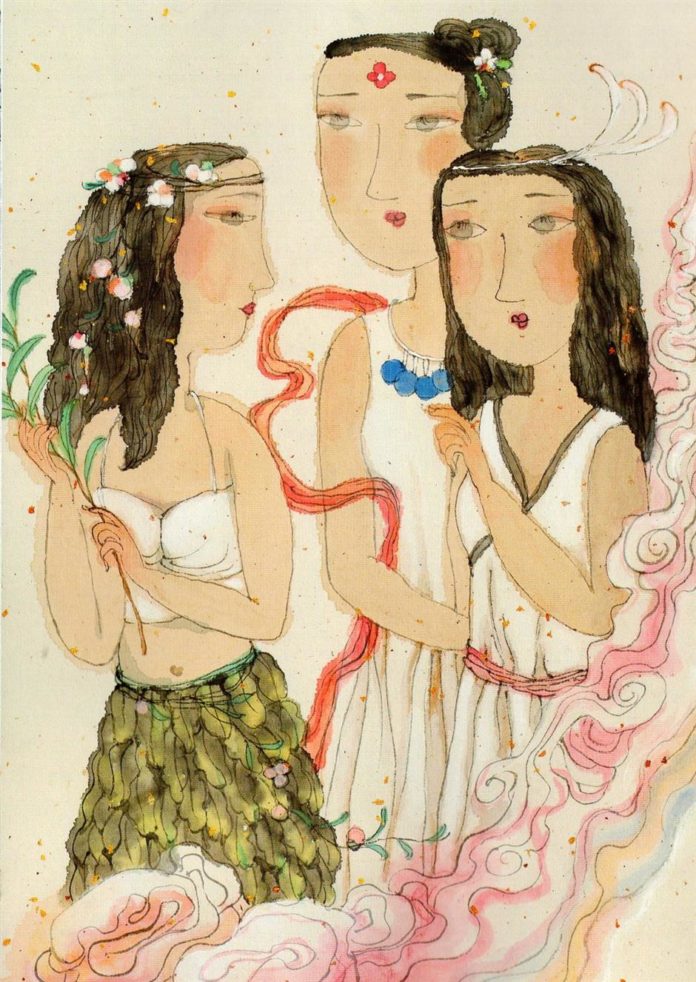 Emperor Yan had three beautiful daughters. Each had a beautiful legend, leaving the human world the stories of Sang (Mulberry), Ling (Spirit) and Que (Bird).

The eldest daughter loved Chisongzi, an assistant to the emperor who practiced magic to pray for rain.

Chisongzi, who had invented an elixir that made whoever took it immortal in fire, presented it to the emperor, but it was rejected with an indifferent smile, “If we all become immortals and leave, who will help the ordinary people?”

Chisongzi jumped into a bonfire after a ceremony praying for rain. As people screamed, he ascended slowly, surrounded by smoke and light. 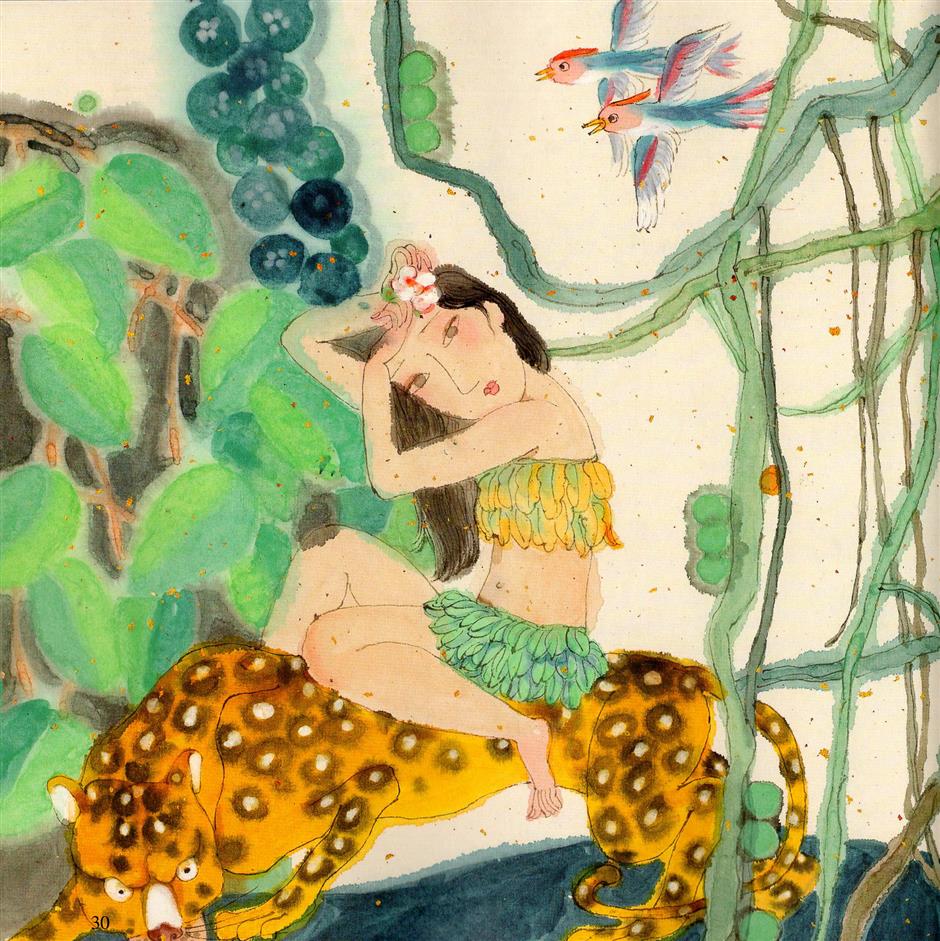 The emperor’s eldest daughter wanted to be with her lover. She heard that Chisongzi was living in a stone chamber on west Kunlun Mountain. His body was then as light as a feather and capable of flying in a storm. She was determined to become immortal, too.

Unwilling to leave her parents for long, she made a nest on a mulberry tree near home. Sometimes she became a white magpie; sometimes she changed back to a girl wandering in the forest.

Emperor Yan burned the mulberry tree to summon his daughter back. However, the magpie fluttered its wings in the fire, transformed into a fairy in white, bowed and disappeared. Amazingly, the mulberry flourished after the fire. Thus people called the magic tree Dinu Sang, literally “emperor’s daughter Mulberry.” 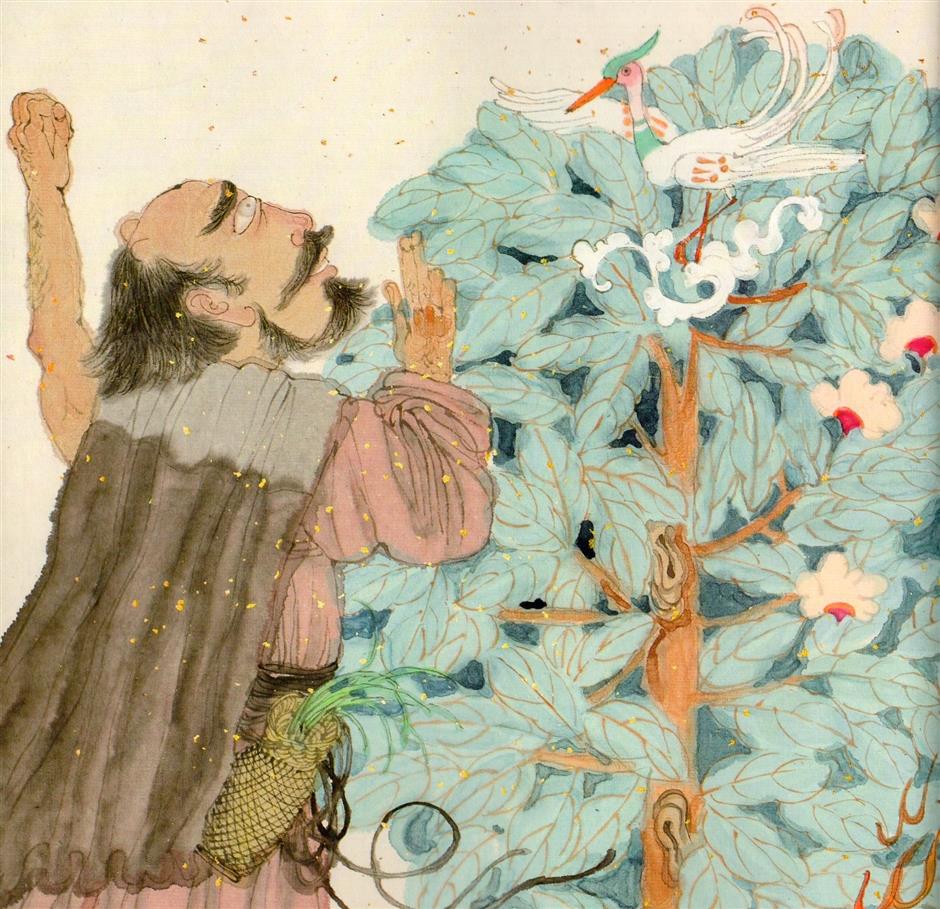 The daughter married Chisongzi and they lived as an immortal couple on Kunlun Mountain, but they still sometimes helped pray for rain in the human world.

Emperor Yan’s second daughter, Yao Ji, was beautiful and sentimental. Unfortunately, she died young and was buried on the south slope of Wushan Mountain near a river. Her soul clinged to a lingzhi mushroom which could help people become immortal.

Her spirit wandered as a mountain goddess. She often stood lonely on the top of the mountain with bamboo around and clouds underfoot, missing her family far away. The goddess always helped guide travelers on rivers in the valleys. She also later helped Yu the Great to tame floods with her divine power. 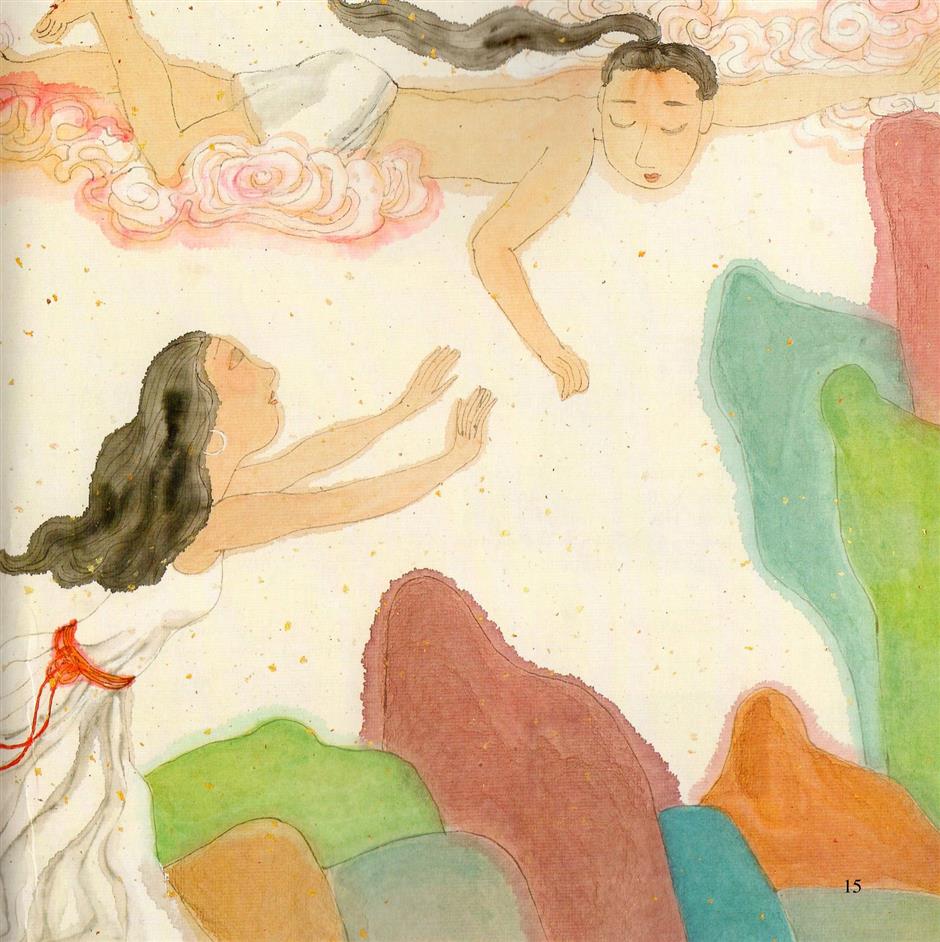 It is said that based on Yao Ji, poet Qu Yuan created the image of Shangui (mountain goddess) in “Nine Songs” during the Warring States Period (475-221 BC). As it describes, a girl came to the mountain with a charming look and a becoming smile, clad in creeping vines and girded with ivy.

“Do you admire me for my lovely form?” She rode a red leopard, striped lynxes following behind. Her chariot of magnolia arrayed with banners of cassia; her cloak made of orchids and her girdle of azalea. 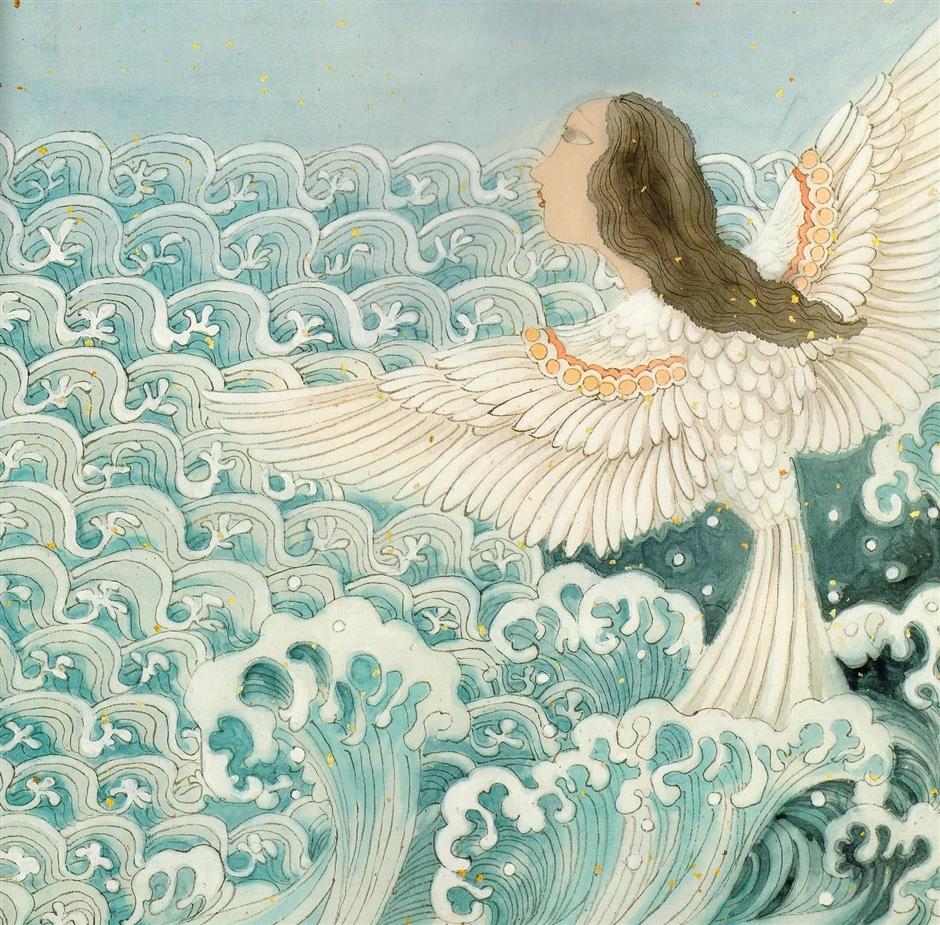 The youngest daughter, Nuwa, was smart and curious. One day, visiting the seaside with Emperor Yan, she wondered how big the sea was and what it was like on the other side. The emperor told her nobody knew as no one had ever been there.

One peaceful and sunny morning, Nuwa sailed a boat to the other side of the sea. Suddenly, dark clouds gathered and her tiny boat was engulfed.

Emperor Yan called her name again and again, but heard no reply but the sound of waves.

On the second day, a beautifully patterned bird flew from where Nuwa’s boat had sunk. The bird hovered about the emperor for a while and flew off with a sad cry.

Every day, the bird took small stones and branches in its beak from Mt Fajiu, flying across high mountains and lofty hills and throwing them into the sea in the hope of filling the sea up.

The god of the sea roared: “You tiny bird, don’t overrate yourself. You cannot fill a corner for the big sea even in 10,000 years!”

“Sea, you took my young life away! No matter how many years it may take, I will keep filling you!” said the bird.

Day after day, and year after year, the bird kept flying to the sea with stones and branches, never giving up. People called it Zhique (the bird of will) or Dinu Que, literally “emperor’s daughter Bird.”

Although the three daughters suffered misfortune, their inspiring deeds have been widely spread to benefit humanity.