Visitors are welcomed by a vast display of art installations by the pair, scatterd around the spacious platform of the PSA’s second floor. Saint Phalle’s signature sculptures in exuberant colors and dynamic structures juxtapose with Shen’s artworks of everyday feminine objects — comb, hair braids, corset — presenting a provocative prologue to the exhibition “Hon,” which runs through October 14.

Literally meaning “she” in Swedish, “Hon” comes from a controversially avant-garde installation work of the same name that Saint Phalle created in 1966. In the Museum of Modern Art in Stockholm, a gigantic installation featured a woman lying on her back with her legs open, in between which visitors entered. Inside included machines pounding coca-cola bottles systematically, a cinema screening a Greta Garbo movie, a milk bar and a big exhibition of “fakes,” which displayed fake Jackson Pollacks and other big masters of modern art.

“In the right leg there was a lovers’ seat, where people could tell each other secrets and love words. But they didn’t know that in this part, everybody could hear the discussion, so no secrets (at all),” recalled Bloum Cardenas, granddaughter of Saint Phalle, and also trustee of the Niki Charitable Art Foundation. She appeared at the opening for a sharing session with Shen and PSA director Gong Yan.

“Niki was proud to say that she (‘Hon’) was the biggest prostitute in Sweden who had the most visitors,” said Cardenas. 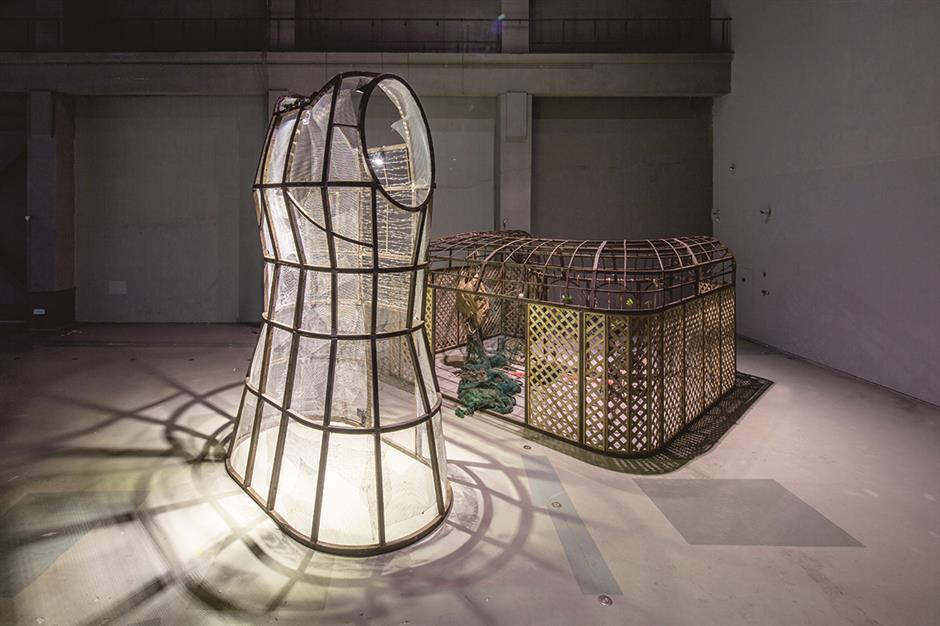 Though the installation was quickly torn down three months later, it was deemed a remarkable piece of artwork that cemented Saint Phalle’s approach to the emancipation of women.

One of the leading artists of the 1985 “new wave” art movement in China, Shen has long focused on cultural translation and cultural shock, as well as identity issues of immigrants.

Although they had never met before, they “share a common interest of transforming human bodies into huge architectural structures,” Shen said.

To echo Saint Phalle’s monumental “The Tarot Garden” in Tuscany, Italy, Shen created an installation work entitled “La Jardin” (“The Garden”). With a height of 5.5 meters and shaped like a corset, it invited visitors in to experience two different social landscapes.

“Last Night I Have a Dream,” Niki de Saint Phalle

Shen described it “an interesting experiment” to build up a feminine “jardin,” a word of masculine gender in French. “It’s a garden that I collude with Niki, as if children conceive risky games in the garden,” added the 59-year-old.

“The artworks of the two artists accidentally echo each other, which seems inevitable on this occasion,” said Gong Yan, who curated the show.

Passing through the “collusive” garden of the pair, visitors will find an on-screen display of how Saint Phalle made her renowned “shooting paintings” on the corridor. In the adjacent exhibition room, Shen’s “Classroom Assignment,” a dozen wooden desks with firecrackers, is on display. Both works “involves a bit of lethal weapons,” Shen said. 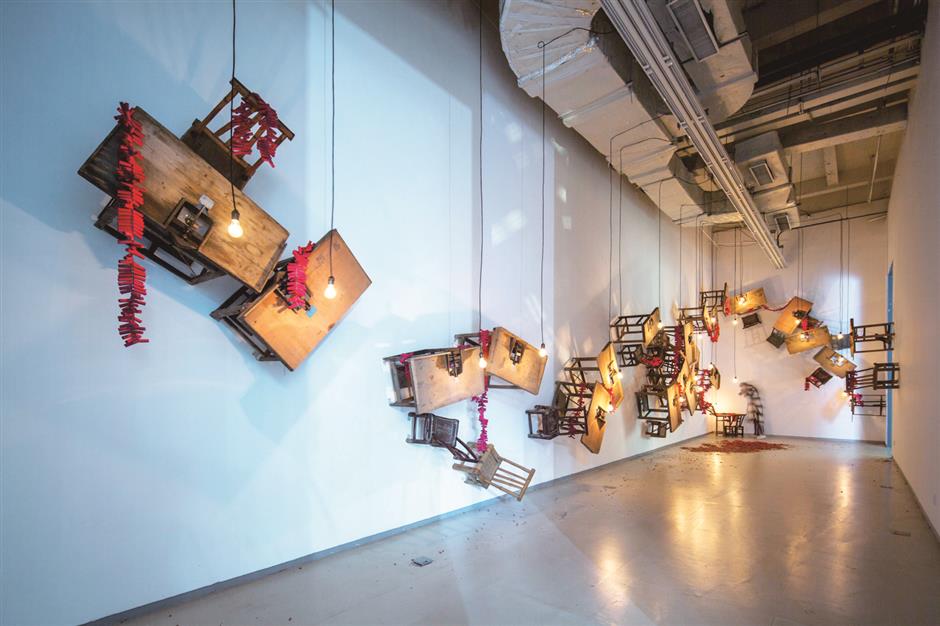 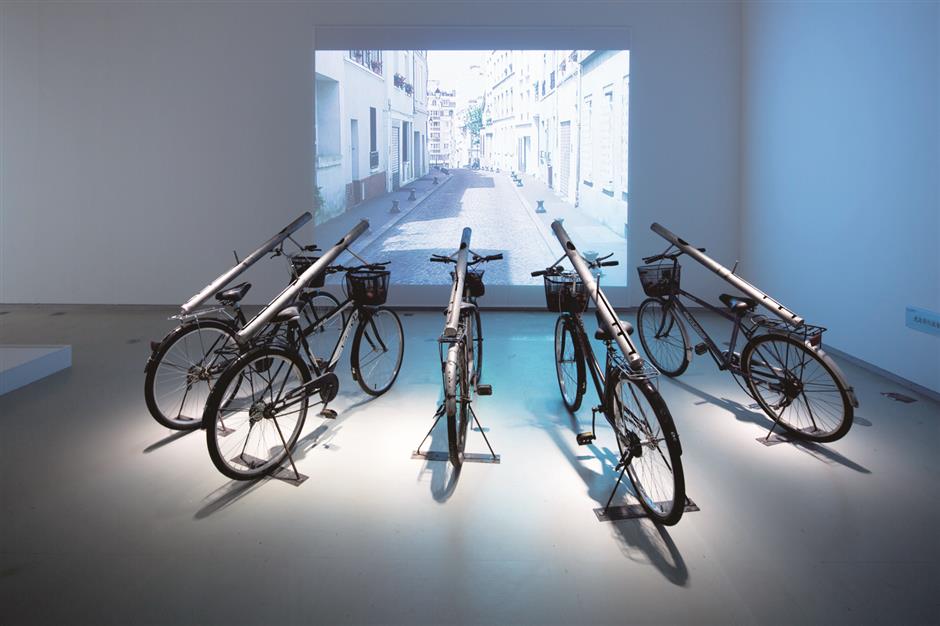 Born in 1930 in France and raised in the United States, Saint Phalle was one of the few female artists to receive recognition in a male-dominated art world in her time.

Cardenas remembered her grandmother used to say that “if she hadn’t be a beautiful woman, she would’ve be put down” at the time.

Her portrayal of women went beyond common feminine beauty, focusing on female bodies, the power of fertility and an appreciation of womanhood. Her renowned Nanas, created since the mid-1960s, were inspired by the pregnancy of Claire Rivers, wife of her artist friend Larry Rivers. 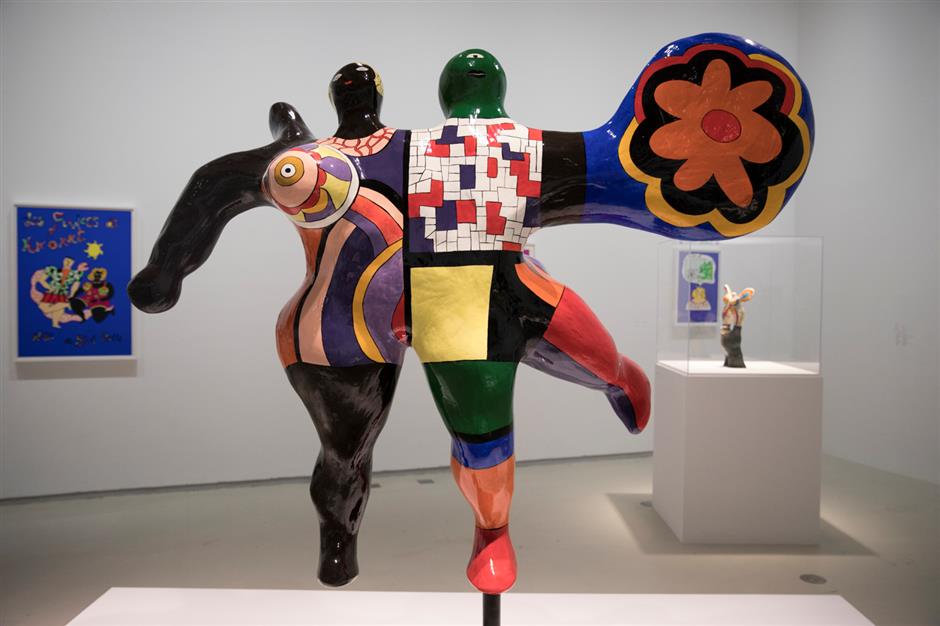 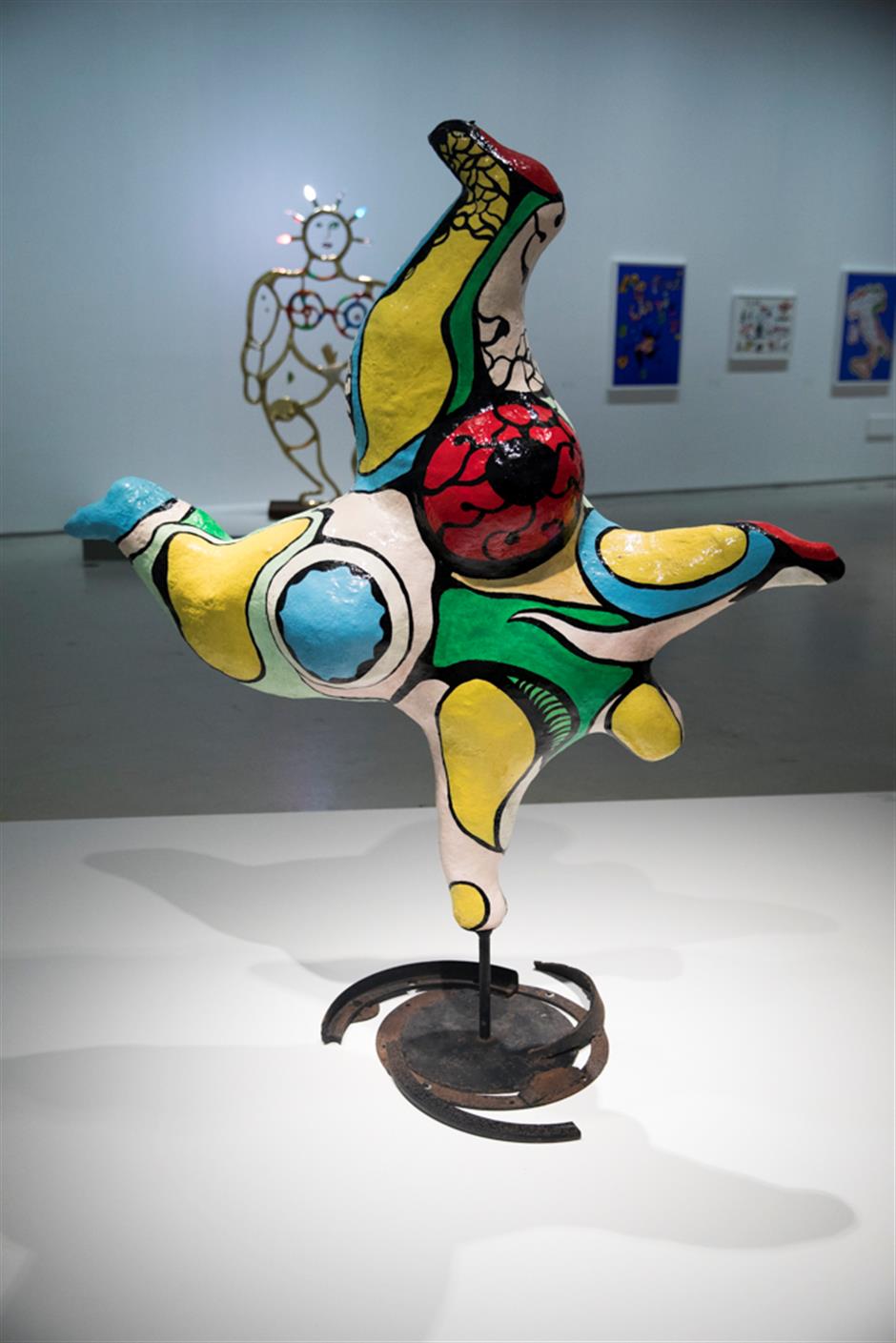 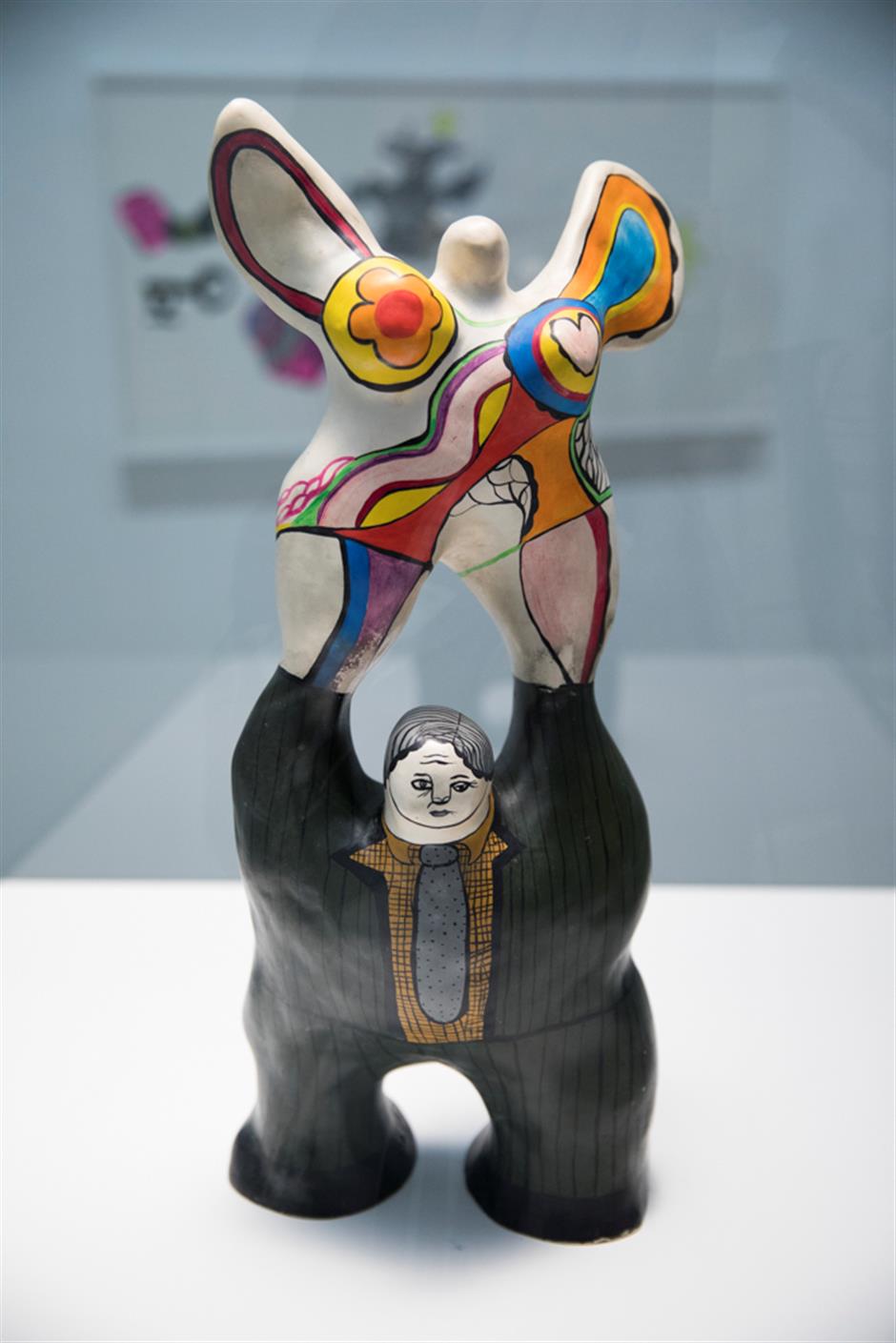 The series was later developed with sculptures of Nanas in various movements, based on women in all walks of life. Apart from celebratory works, she was also “critical of mothers,” “being very mean to mothers,” Cardenas said, referring to her series entitled “The Devouring Mothers.” The artist’s book features a mother eating her husband and children and through the works, she looked at herself as a 14-year-old beautiful girl. Using her imagination, she managed to appease to her inner demons while revealing the relationships between her personal domain and the outside world.

The tongue is one of the common images in her works, such as “Wasting One’s Spittle” and “Diverged Tongue.” Moving to Paris in the 1990s with her husband, Shen was once troubled by the identity issue of immigrants, which became a major topic in her art. 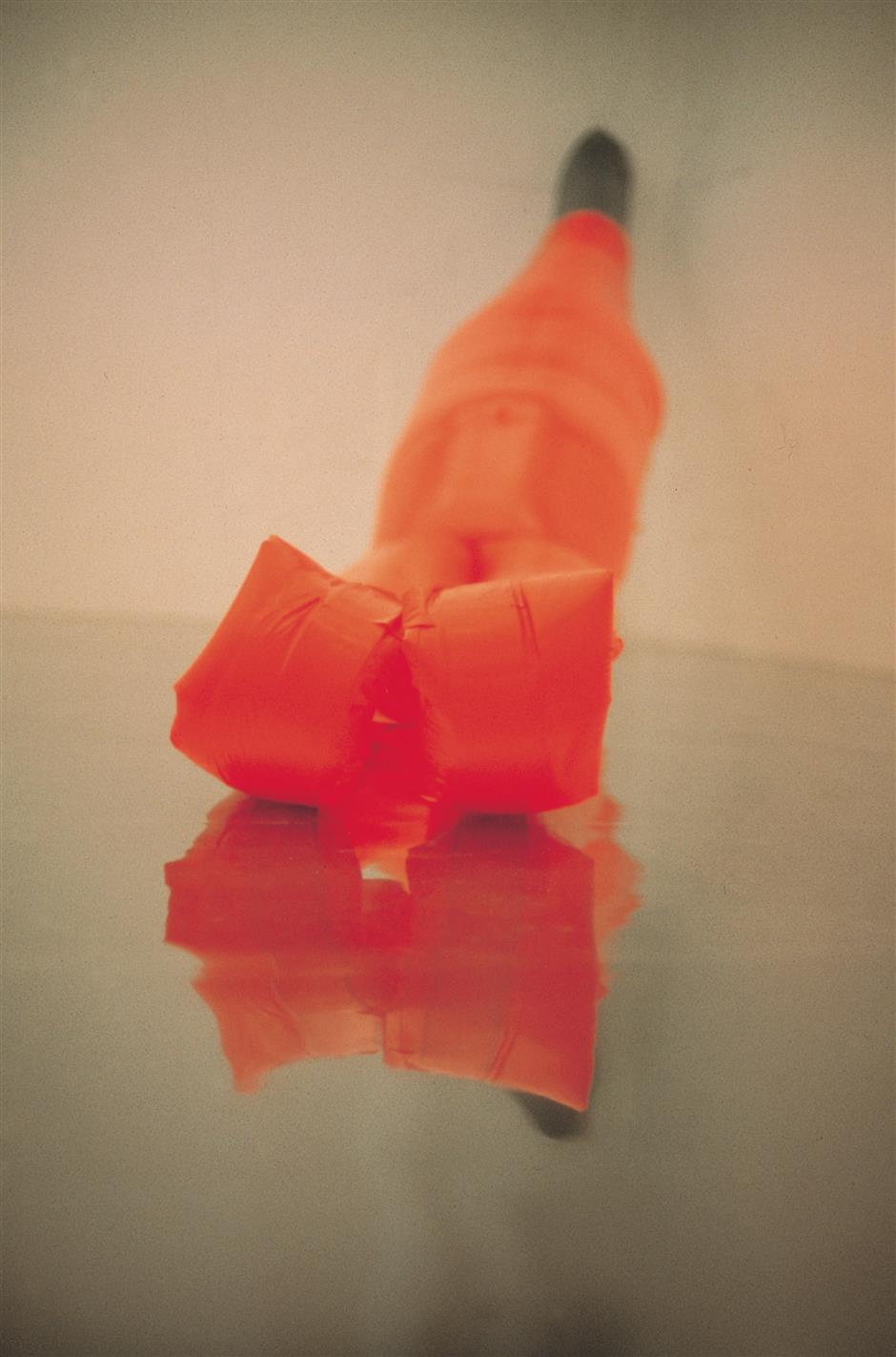 “Wasting One’s Spittle” features an iced tongue. When the ice slowly melts, a dagger is revealed. “It comes from my personal experience that once you cannot express properly, without rights of speech, you are deprived of your human rights,” she explained.

“Diverged Tongue” showcases a tongue speaking two languages, which captures her early days in Paris — caught in the dilemma of dual identities.

“The exhibition is not intended to talk about any doctrine, which is why we entitle it ‘Hon.’ In the Chinese context, it’s just a discourse filler, with no meaning at all,” said the PSA’s Gong. “We just want to present two excellent female artists in a simple and unpretentious way — their wisdom, their hope and their enthusiasm for the world.”