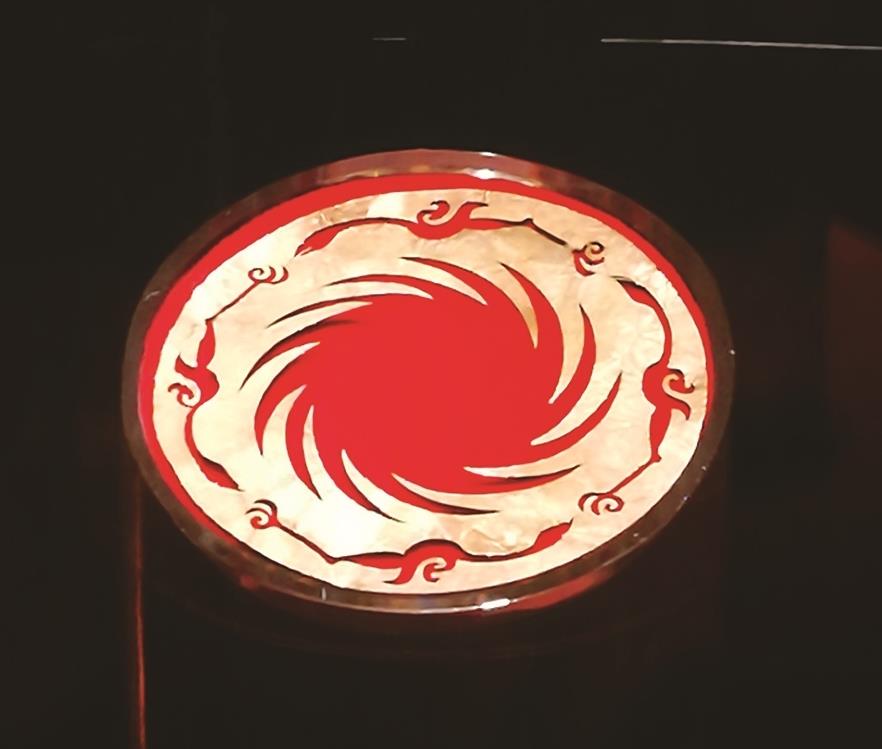 On October 12, 2005, the eyes of the world were on Shenzhou 6, the second human spaceflight of the Chinese space program, which was launched from the Jiuquan Satellite Launch Center.

The spacecraft carried a crew of Fei Junlong and Nie Haisheng, along with a Chinese national flag used for scientific expeditions in the polar region, a flag of the International Olympic Committee, a 2010 Shanghai Expo flag and an exquisite Shu, or Sichuan, embroidery featuring a mythical bird. Made of silk, the embroidery was created by three masters in Chengdu in Sichuan Province.

What is the prototype of the bird? And why is it so important? The image of the bird comes from a national treasure, which was excavated in 2001 from the Jinsha site in Chengdu. It was one of China’s most important archeological discoveries at the start of the 21st century.

The ring-shaped ancient artifact is made of gold leaf with a weight of 20 grams and a thickness of 0.02 centimeters. The center of the artifact is a sun pattern with 12 points. Surrounding the sun, there are four birds, flying in the same counterclockwise direction.

Based on the test, the experts found that the gold content in the artifact was as high as 94.2 percent. It is hard to believe that such an exquisite artwork was made by our ancestors over 3,000 years ago.

The Jinsha site, a tremendous archeological find of the ancient Shu civilization, was accidentally discovered during a real estate construction. It is located in the northwest of Chengdu.

Thousands of artifacts were found at the site, including gold objects, bronze vessels, pottery, jade artifacts, carved stone ware and ivory. The site is now the Jinsha Site Museum where the ancient remains are exhibited.

The ancient Shu tribe was one of the earliest known to mine and use gold. They had already mastered placer gold processing technology in circa 1,000 BC. Apart from the golden sun bird, there are many other gold pieces in the shape of frogs, cicadas and golden masks.

The experts suppose that the ancestors might hot forge gold first and then hammer it into thin sheets before painting and carving patterns.

They worshipped the sun as it was a source of life, giving warmth and illumination to mankind. Having no idea the sun’s motion, the ancestors believed that a big bird carried the sun on its back, flying up and down every day.

In ancient Chinese mythology, there is a creature called Wu or Jinwu, the three-legged crow, which is said to inhabit and represent the sun. The creature is also mentioned in the “Shan Hai Jing,” a Chinese classic text about mythic geography and myth.

According to folklore, there was a sacred tree called Fusang in the valley of  Yanggu somewhere over the East Sea. Ten sun crows perched on the tree, one on the treetop while the other nine sat on the branches.

Every day, one of the crows would travel around the world, carrying its corresponding sun.

Intriguingly, archeologists found a bronze tree at the Sanxingdui site, which was also a significant part of Shu civilization. Standing 3.95 meters tall, the life-size tree houses nine birds. The artifact was broken when unearthed. People assumed there might be another bird on the top of the tree. The artwork is thought to have been inspired by the sacred tree mentioned in the mythology.

Due to its aesthetic value, exquisite technology and profound history, the image of the golden sun birds adornment becomes the symbol of “China Culture Heritage.” The introduction of the sign intends to enhance people’s awareness of cultural heritage protection.

Another national treasure that evolved to be an icon of Chinese culture is the sculpture Bronze Running Horse from the Eastern Han Dynasty (AD 25-220), which is now in the Gansu Provincial Museum. The design of the China tourism emblem is based on the cultural relic.

After 115 hours and 32 minutes in space, the Shenzhou 6 landed safely on the Siziwang Banner of Inner Mongolia Autonomous Region. The Golden Sun Bird representing generations of Chinese realized its dream of traveling in space eventually.