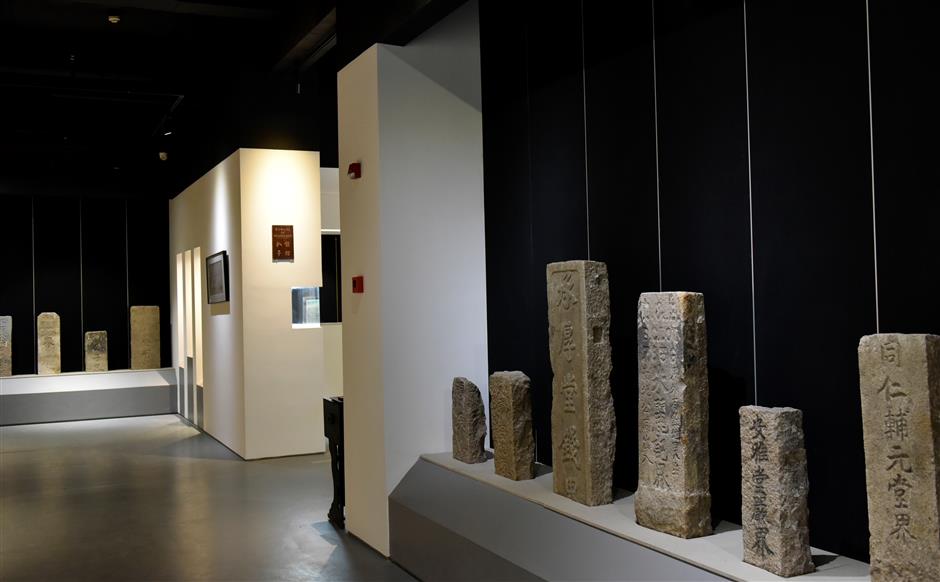 Stone boundary markers once commonplace on corners in Old Shanghai highlight the exhibits at a private collector’s museum near a road construction site in Lujiazui of the Pudong New Area.

Chen Bai, founder and curator of the Collection Museum of Shanghai Modern, opened the 400-square-meter site earlier this year as a showroom of life in 1930s Shanghai. It is filled with memorabilia collected over the years.

A native of Jiangsu Province, Chen, 40, has lived in Shanghai for more than 20 years and is fascinated by Old Shanghai. He runs a business related to Art Deco and design, which finances his collecting hobby and the operation of the museum.

What makes the museum stand out is its collection of more than 40 jiebei, the stone boundary markers that stood on corners of the old city, sometimes even before construction began on buildings that were to occupy vacant lots.

“Jiebei reflect the urban planning of about 100 years ago,” Chen said. “They were status symbols for streets, homes of government bodies, industrial organizations, charities and companies — even large private houses.”

In a sense, the markers functioned as property ownership certificates or land contracts. Chen’s museum has the stone tablets of a Ningbo firm doing timber business in Shanghai, a bureau that offered free smallpox vaccination to the poor, and various municipal projects.

Many of the stone markers are duplicates because it was common practice for the government of that era to set up two stones in a diagonal line.

“It was an easy, clear way to define the whole area of the property,” Chen said.

Every boundary marker has a story behind it.

The tablet engraved with “Tongren Fuyuan Charity Boundary” refers to Shanghai’s once largest charity foundation. Beginning in 1804, the charity offered free coffins and built tombs for those who could not afford their own.

“It was something like today’s non-governmental organizations,” said Chen, who discovered the stone in 2014.

The stone marker engraved with “Yong’er Tang Shen’s Boundary,” dating back to 1891, is the oldest in the museum.

Chen said it was an ordinary marker of a rich family named Shen, and it was owned by a granny living in the former downtown Nanshi District. She said she wanted 100 yuan (US$14.50) for it.

“I ended up giving her 150 yuan and told her to call me if she finds anything like that again,” he said.

That was pretty cheap. Chen has bought other boundary markers at much higher prices from collectors and antique traders. The smallpox vaccine bureau tablet, for example, cost him nearly 30,000 yuan.

He said he tries to do historical research on every boundary stone he finds, but there are several that remain enigmas.

A tablet in the museum carved with the year “1863” and the initials “HJH” still has a question mark hanging over it.

“Experts from the Shanghai History Museum are doing the research on it,” Chen said. “A probable explanation relates to the International Settlement of Shanghai, which was set up by the British and the US in Shanghai in 1863, but it’s only a guess now.”

His collection of boundary markers, mostly from Old Shanghai’s Chinese-controlled areas, is a supplement to the collection in the Shanghai History Museum, which mainly focuses on the city’s foreign concessions before 1949.

Chen said he has collected about 70 percent of the city’s jiebei, making him the largest owner among all private collectors and public institutions.

He started collecting the stones more than seven years ago, when he was a photographer capturing old homes before they were torn down for urban renewal projects in the city’s vanishing old downtown areas.

“No one cared about the stones at the time,” he said. “They were mostly buried, bulldozed, smashed or thrown away. But looking back today, these boundary tablets play a key role in charting Shanghai’s growth and development.”

Chen collected his first stone boundary marker amid debris in the old town area of the Huangpu District.

“I had the intuition that it must have some special meanings for the city,” he recalled.

All made of granite, each stone weighs at least 40 kilograms. That meant cost for Chen to transport them back to storage.

His love of Art Deco architecture and designs of the 1930s has led Chen to collect more than just old boundary markers.

His museum is filled with household paraphernalia from that era, including posters, a piano, typewriters, glasses, cigarette lighters, a silver belt buckle, iron nameplates of rickshaw pullers, an early flight ticket from Shanghai to the United States, souvenir badges and beer bottles.

As his collection grew ever larger, Chen decided he needed a space not only to keep his collectibles but to share them with the public. Hence, the museum’s creation.

“There’s no admission fee,” he said. “I don’t want to make money from it, and I don’t count on the museum to make money. To some extent, it’s a space for my individual interests and personal happiness.”

Chen has an expansion plan to rent two more floors of the building now housing the museum.

He also collects handrails, decoration and furniture pieces from the stairways of the old shikumen, or stone-gated houses. They are now stored in a warehouse but will be exhibited in the future.

“It’s the beautiful art design and unique disposition of that era that enchants me,” he said. “The design and aesthetics of Shanghai in the 1930s will never be seen again because today’s designers, including me, cannot create anything reaching that standard.”

Since its opening, the museum has received a steady flow of visitors of all ages, which surprises Chen greatly because he does little promotion.

He remembered one old man who was moved to tears when he saw so many household items like those of his childhood.

“None of them has any political significance, commercial or artistic value,” Chen said. “They are daily items once used by ordinary people, but this old stuff is part of the city’s memories and the epitome of the public’s aesthetic consciousness.”

The museum, at 288 Pudong Ave, is open Tuesdays through Saturdays. Entry is free but reservations are required via 2042-2829.