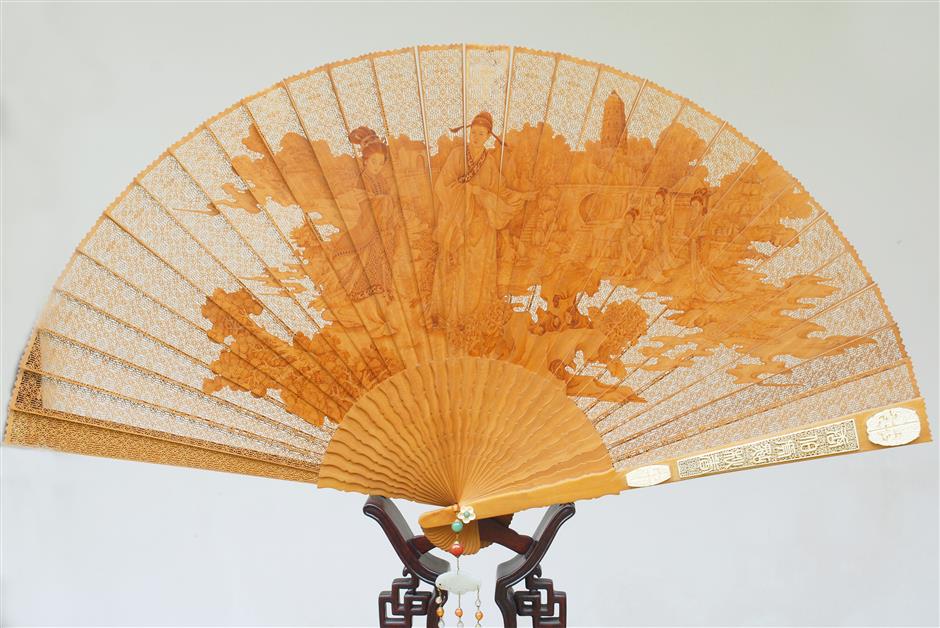 A gentle swish of a sandalwood fan instantly fills the air with the warm, subtle fragrance of the aromatic wood.

“People I meet quickly realize that I work in a sandalwood fan factory because of the scent that surrounds me,” said Xing Weizhong, a master of making hand-held fans in Suzhou. “It always amazes me.”

Xing, who is now in his 60s, was honored as a national “inheritor” of the intangible cultural heritage of fan-making in 2012.

China probably has the longest historical record of continuous fan making in the world. The skilled craft, which dates back at least 3,000 years old, produces hand-held fans in three categories: round fans, folding fans and sandalwood fans.

Round fans — also known as gong fans, literally “imperial fans” — were the more common up to the end of the Song Dynasty (AD 960-1279). They were used by noblewomen as a sartorial accessory.

In the Ming Dynasty (1368-1644), folding fans gained popularity. Literati wrote inscriptions that were painted on fans sent as gifts to friends. The fan bones were commonly made of bamboo at that time.

The sandalwood fan has a shorter history, dating back about 100 years. It is the only style that offers not only thermal comfort and the visual enjoyment, but also a pleasant fragrance. The scented fans were designed for women.

“The fragrance of the fans made from authentic sandalwood lasts forever,” said Xing.

“Authentic” refers to sandalwood from India. The tropical tree grown there is small, oily and slow-growing. It’s said a sandalwood tree takes at least 100 years to reach its full size.

According  to Xing, sandalwood was once imported as a precious medicinal ingredient that was said to help relieve anxiety and aid digestive problems.

What’s more, the wood works as a natural insect repellent. Many people store their sandalwood fans in wardrobes after summertime to repel moths.

Nowadays, Indian sandalwood is almost impossible to secure because of overexploitation. The tree has been listed as an endangered species, and the Indian government bans its export. To ease the supply problem, sandalwood from Indonesia and Myanmar is used. However, the fragrance from those trees isn’t as redolent as from the Indian trees. Moreover, the fragrance of the Indonesian and Myanmar sandalwoods is light, so perfume is added to the wood.

It all adds up to higher costs. Today, the price of sandalwood has risen to 400 million yuan (US$59.7 million) a ton, according to Xing. But then again, sandalwood fans have always been expensive.

In an earlier era, the fans were used by women from wealthy families. They put the folding fans into small handbags and took them along when watching movies or stage dramas in theaters that then lacked air conditioning.

The refreshing aroma and exquisite craftsmanship of sandalwood fans have made them a fashion and social comment. 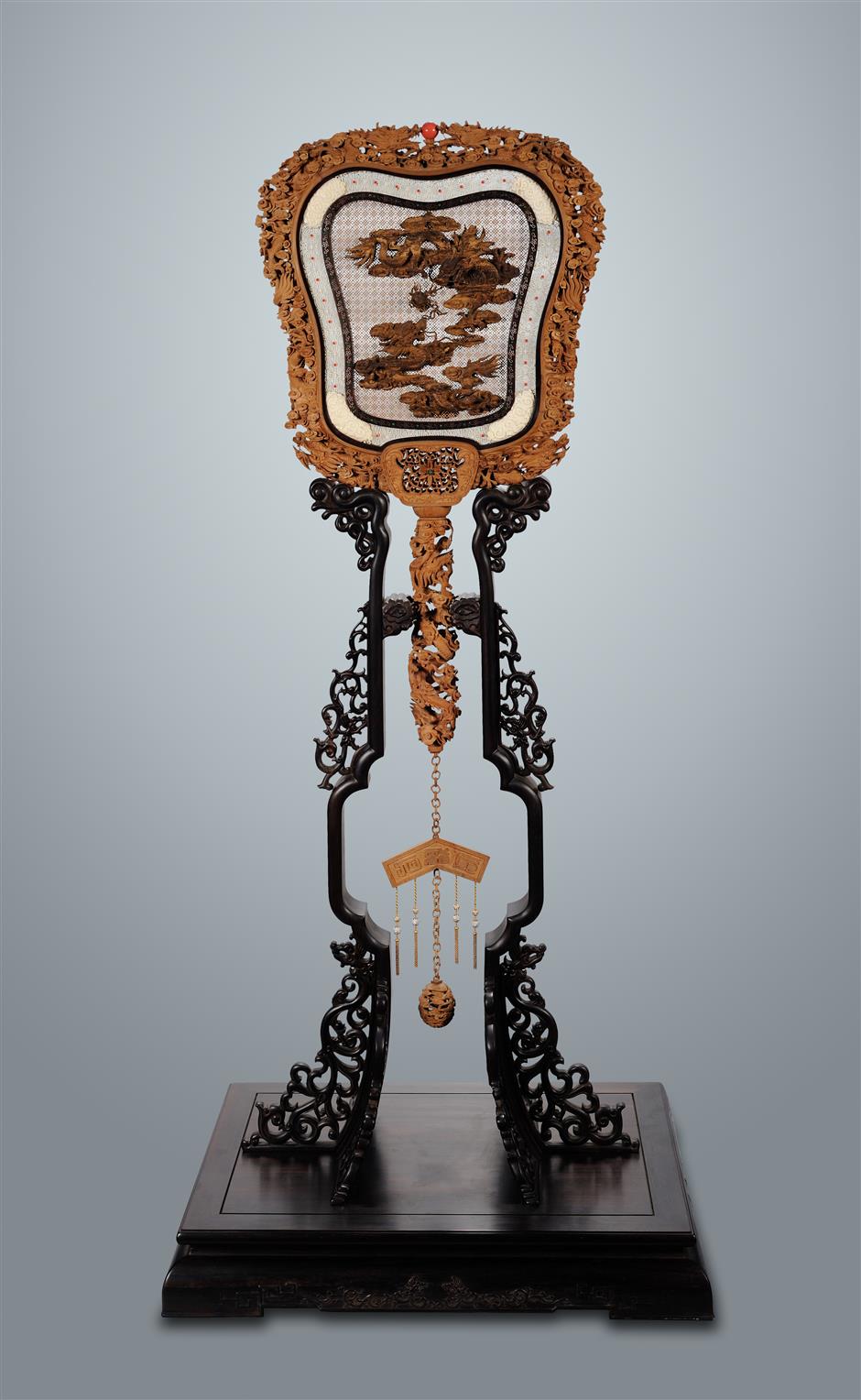 A gong fan made of sandalwood, eaglewood, ivory, jadite and coral is the centerpiece of the Suzhou Arts and Crafts Museum.

Suzhou today is the main production center of sandalwood fans.

Making a fan involves about 10 steps, from choosing materials to checking final quality.

The three major steps involved in the process are cutting the intricate interior parts using a coping saw, decorating the wood with a heated metallic point, and carving patterns on the ribs of the fan.

“Apart from distinctive fragrance, intricacy is another characteristic of sandalwood fans,” said Xing. “They are more decorative than practical.”

With the improvement of craftsmanship and tools, sandalwood fans created today are much more exquisite than those made in the 1950s and 1960s.

Back then, craftsmen could cut only about eight external shapes on a slat. That number is more than 10,000 nowadays.

In the 1950s and 60s, sandalwood fans were made for export to Southeast Asian countries. In the 1970s, the Suzhou Sandalwood Fan Factory became a cultural exchange window, where foreign visitors could learn about the skill and even buy fans.

In the 1980s, demand from the Japanese and domestic markets was particularly strong. Sandalwood fans are either 21 centimeters or 26 centimeters long, with 28 slats of thicknesses of less than 1 millimeter each.

“The making of fans is a niche art form,” said Xing. “I still remember an exhibition held in the 1980s, when sandalwood fans took a back seat to Chinese embroidery, porcelain and jade artworks. The experience affected me deeply. I vowed then to promote the development of fans as an art form.”

His contribution to the art is a fan 52 centimeters in length. The fan portrays the story of Tang Yin, a notable scholar of the Ming Dynasty, who falls in love with a servant girl called Qiuxiang after he glimpses her on a boat passing through Suzhou. Tang invites Qiuxiang to stroll on Tiger Hill in Suzhou.

The rib of the fan is decorated with engraved ivory. The plum blossom that adorns the rivet is also made of ivory. Xing spent over one year creating this artwork.

“I am satisfied that I did one thing really well in my life,” said Xing.

The salesroom of the Suzhou Sandalwood Fan Factory is next door to the museum. Visitors can view the process of making sandalwood fans there.