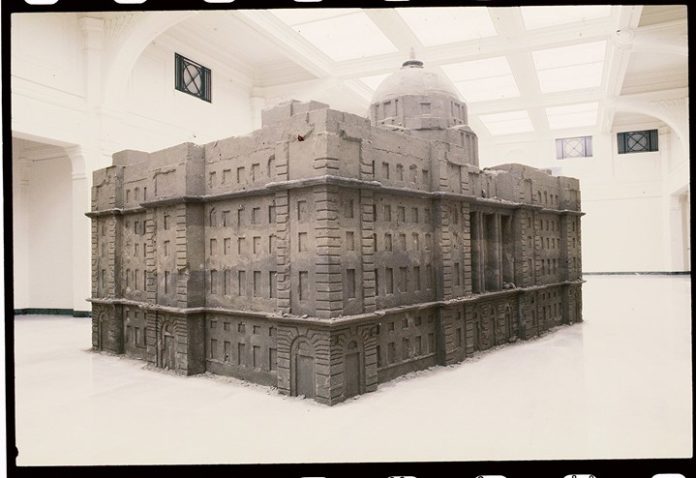 Huang Yong Ping: Bank of Sand, Sand of Bank, opens at Gladstone Gallery from April 28 to June 9, 2018. This is the artist’s fifth exhibition with the gallery, an important historical work by Huang for the first time in New York since its creation nearly two decades ago.

Bank of Sand, Sand of Bank derives its structure from the former HSBC Bank in Shanghai, built in 1923 by the British architecture firm Palmer & Turner. During the Chinese Revolution of 1949, this Neoclassical landmark was transformed into the Communist Municipal People’s Government Building, and later became the headquarters for the Pudong Development Bank in the 1990s. Huang’s 20-ton replica of this edifice, comprised of sand and concrete, contemplates the troubling history this building has lived through while questioning the power of ruling institutions. Through the use of unstable materials, this building, which is meant to stand for security and power, is transformed into a vulnerable and forgotten ruin that appears as though it could collapse at a moment’s notice. The work’s fragility and temporality visualizes the turbulent past and exchanges of power this monument has witnessed over time, while also providing a deeper narrative surrounding the longevity and effectiveness of governing bodies throughout history.

Originally shown in 2000 at the Shanghai Biennale, this work connects to the artist’s interest in reproducing and recontexualizing significant monuments throughout history, infused with visual clues that address themes such as colonialism and cultural reappropriation. Bank of Sand, Sand of Bank is a particularly significant example of this impulse for the artist, who has also revisited sites such as the Colosseum, the Pentagon and Osama bin Laden’s compound in Abbottaban, Pakistan. In this instance, the building’s original structure adopts a Neoclassicist design and was originally intended as the Chinese headquarters for a bank founded in British-ruled Hong Kong in the late 19th-century by a British architecture firm. Huang highlights the structure’s complicated origins, both physical and conceptual, filled with an amalgam of blatant seizures of cultural property and ideological notions.

Huang Yong Ping was born in 1954 in Xiamen, China, and currently lives and works in Paris, France. He participated in the seminal exhibition “Magiciens de la Terre” at Centre Georges Pompidou, Paris in 1989, and represented France at the 1999 Venice Biennale. 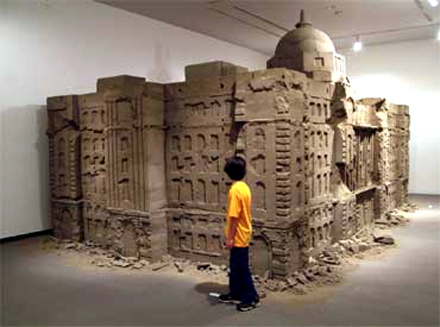 In 2006, the Walker Art Center in Minneapolis organized and premiered his retrospective “House of Oracles,” which traveled to Mass MoCA in North Adams, Massachusetts, Vancouver Art Gallery, and Ullens Center, Beijing. Other solo exhibitions include: CCA Kitakyushu, Japan; De Appel, Amsterdam; Fondation Cartier pour l’Art Contemporain, Paris; Atelier d’Artistes de la Ville de Marseille; Astrup Fearnley Museum, Oslo; Barbican Art Gallery, London; and New Museum of Contemporary Art, New York. Recently, Huang was featured in the Solomon R. Guggenheim Museum exhibition, “Theater of the World: Art in China after 1989,” and is currently included in “What Absence Is Made Of” at The Smithsonian’s Hirshhorn Museum and Sculpture Garden, on view through summer 2019. This year, Huang will be included in the Bangkok Art Biennale from October 19, 2018, to February 3, 2019.