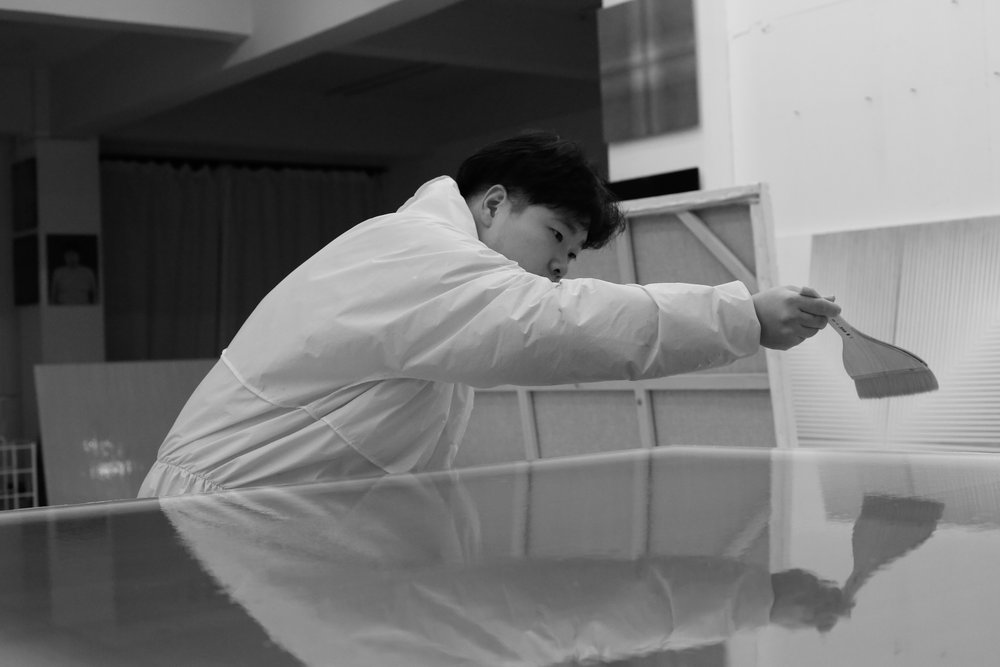 We had the chance to interview the artist Wang Yi about his work and his process of creating them, on the occasion of his exhibition “Inside and Outside”, a dual show between Wang and French artist Claude Viallat, presented by HdM Gallery. Though at first glance, the geometric abstraction can be easily taken as mechanical, rigorous and precise, there is the element of spontaneity and uncontrollability in both the process and the finished pieces. The geometric shapes overlap with each other in seemingly perfect order and put forward mesmerizing views into the domain of abstraction, yet there is much more to this visual language than is readily obvious. Read on and find out more about the style and Wang Yi’s intention behind his works!

A common theme in your different series is the use of relatively few colors, laboriously applying transparent paints in a repetitive manner according to a very rational and geometric plan you have in mind. The results are linear forms and patterns that have a powerful visual impact. What is your intention behind choosing this style of geometric abstraction?

I minimize the painting elements (color, composition, brushwork, symbols, etc.), which are used in the paintings, to try to create the purity of painting itself in this way. The color I usually use are three primary colors or contrasting colors and complementary colors; the composition of painting is symmetrical or divided equally. Instead of creating an abstract symbol, I divide the big structure into smaller geometric color lumps. In the process, I follow the ‘glazing’ which is used in Chinese and western traditional painting, which is quite a slow technique; the visual effect that is achieved after hundreds of glaze is trembling but stable. It is also part of my backtracking and salute to the tradition, although the painting reflects a modern geometric abstraction.

Due to the lack of figurative references, geometric abstraction is almost universal in the sense that it can be appreciated by audience regardless of their cultural background. What do you think are the advantages and limitations of working in this style?

Any painting certainly contains two levels: visual and conceptual. While exploring pure formal languages, I also try to explore the sociality and naturalness of abstract painting. An abstract painting which seems pure is indeed divorced from reality, and it does not depict figurative subjects. But actually, abstraction already belongs to conceptual art. In terms of visuality of painting, there are certainly many aspects in painting that are common across geographical boundaries and cultures, like some basic painting elements and aesthetics. In terms of meaning and concept, differences in culture, history, politics and lived experiences cannot be avoided. The audience’s understanding of the same work in different national contexts is certainly multifarious, just like how a liberal advocate cannot reach an agreement with someone who believes in centralization and authoritarianism. Certainly, it is possible that people look forward to the stability when in chaos, but look forward to disorder when in order. I see something good and beautiful in the different understandings, or even misinterpretations, that people in different culture backgrounds have.

Your work vary in size and material texture, and elicit different feelings from viewers when viewed from different distances. Is audience engagement a critical consideration for you, and is there a particular way of engagement that you seek to encourage?

We noticed that for some of your pieces, such as “Overlapping” and “Overlapping-slash”, there are spikes behind the aluminium plate, making your work extend beyond the realm of 2D painting. They seem to bring a dimension of spontaneity and unexpectedness to your rational and structured approach of painting. What is the significance of these “spikes”, and how do you think this feature define the nature of your work?

The spikes you can see are not intentional, but the uncontrollable factors even under high level of control. During the process, I use very thin liquid pigments, so usually frames, aluminum plates, mirrors and other bases are horizontally placed. In the process of continuous layering, it is like the generation of ‘stalactites’ due to the geological effect of flowing water in the cave; the more times I overlap the pigments, the longer pigments will drip from the edge. It is a witness of time. I restrain and reduce the traces of brush, to apply and overlap paint in a single direction, so that the final effect looks machine-made even though it is not. Many people think that I use print or inkjet to paint when they only see images of paintings, but these spikes are the ‘evidence’ of my painting process.

Most of your series are in sets of two, and often displayed in conjunction. What is the consideration behind this arrangement?

There are many potential interpretations from the visual and inner meaning of the painting. For example, ‘a set of two’ means unity, completeness and circulation.

Your series “Commentary on the Waterways” takes its name from an ancient Chinese book on geography of the same name, and takes a spontaneous approach to the use of resin in contrary to your other works. Could you tell us about how you conceived of this piece and its significance?

‘Commentary on the Waterways’ derives from my devotion to geography, which is written by Li Daoyuan in Northern Wei dynasty, recording historical research, myths and legends about rivers in the world. Many scholars who studied ‘Commentary on the Waterways’ marked and annotated on it, becoming ‘Image of Commentary on the Waterways’. Because I usually use self-made pigments, uncontrollable contingency would occur even when I try to control; so then I wanted to amplify the automatic and out-of-control characteristics of liquid pigments or resins. I cannot use ‘painting’ to define this series, because I did not ‘paint’, I spread about the transparent pigment on the canvas over a large area, and tilt or stand the frame to allow gravity to guide the pigments. The texture and particulates on rough canvas would change the direction of pigments from time to time. It is like a river erosion or a river changing its course. Doing these repeatedly finally leads to a model of river from the beginning to end, which brings the nature of water into abstract works.

Based on the size and nature of your creative process, your pieces certainly take a long time to produce. However, the art world nowadays has adopted a fast culture. How do you cope with, or resist against the demand for speed and quantity in the current society?

I backtrack to classical painting, from stretching the canvas, making sketches and the base, measuring and marking, to glazing. I also like some older mosaic painting and fresco painting; I adore this devout attitude. ‘Soft fire makes sweet malt’—it seems to be outdated in the current era when painting has been marginalized, but this is my small resistance.

What projects are you currently working on, and what are some of the ideas that you hope to explore in the future?

The painting in progress is about expressing the relationship between individuals and groups, order and disorder, replication and dissimilation in society or networks.