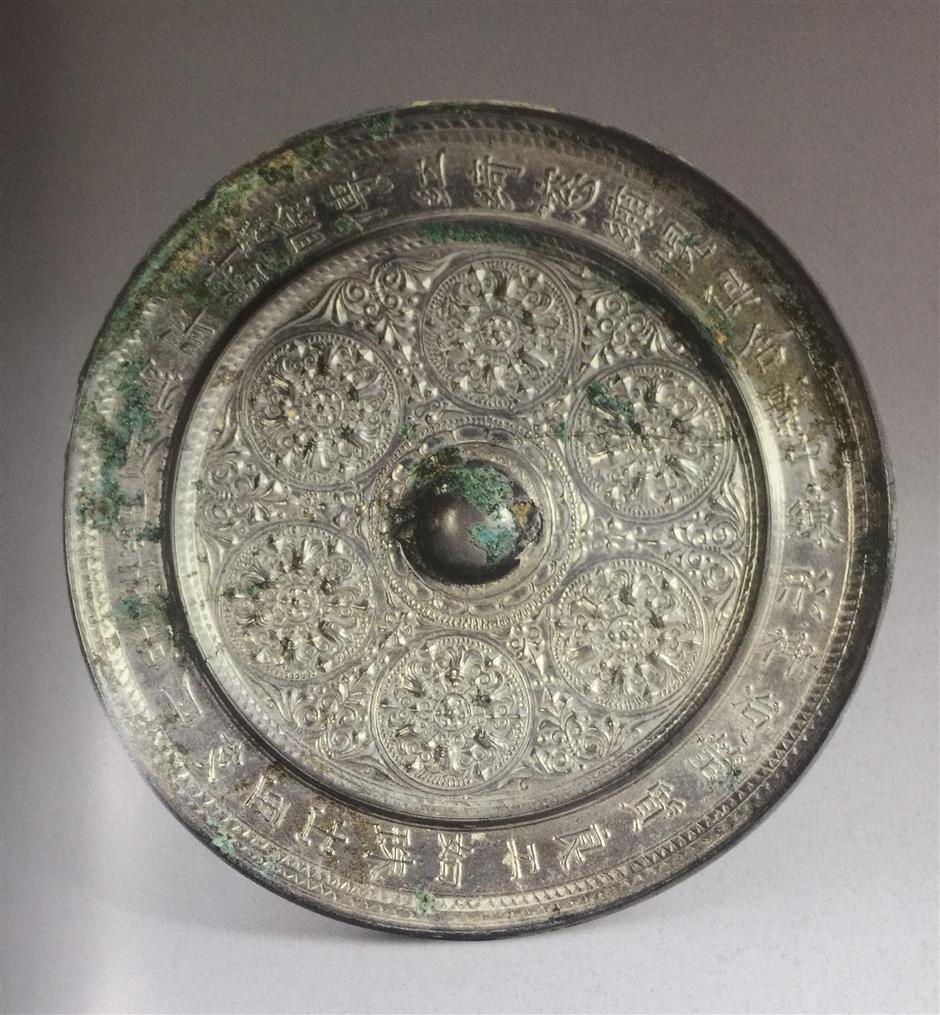 A common Chinese proverb has it that the desire to look attractive is universal, and the ancient Chinese were no exception. Caring about their appearance, the people of the Qijia Culture (2200-1600 BC) in today’s Gansu and Qinghai provinces were the earliest found to have made bronze mirrors.

“The glass mirror is believed to first appear in China in the Ming Dynasty (1368-1644) and didn’t completely replace bronze until modern times. My nanny from Nanxun, Zhejiang Province, once told me that elderly women there still used bronze mirrors in the 1940s,” says Ma Jinhong, deputy director of the department of bronzeware research at Shanghai Museum.

In addition to being a grooming aid, bronze mirrors were also used as ornaments, tokens of love, gifts, religious items in Taoism and burial objects.

The multi-functions echo the fact that mirrors had many Chinese cultural connotations. Even now, Chinese people pay great attention to the placement of mirrors at home, which is fundamental in feng shui. Mirrors are believed to shift the flow of qi (energy flow).

“During the excavations, archeologists found that some bronze mirrors were hung on the tomb walls and faced the coffins. In this case, they were used to exorcise evil spirits. In Taosim, ‘monster-revealing’ mirrors are one of significant tools when priests practice magic,” Ma explains.

One side of the bronze mirror was polished bright to give a reflection. The reverse was often cast with exquisite patterns and had a perforated knob in its center, through which a rope or ribbon could be threaded.

The string helped users handle the mirrors. In the late Warring States Period, stands were created to hold bronze mirrors. 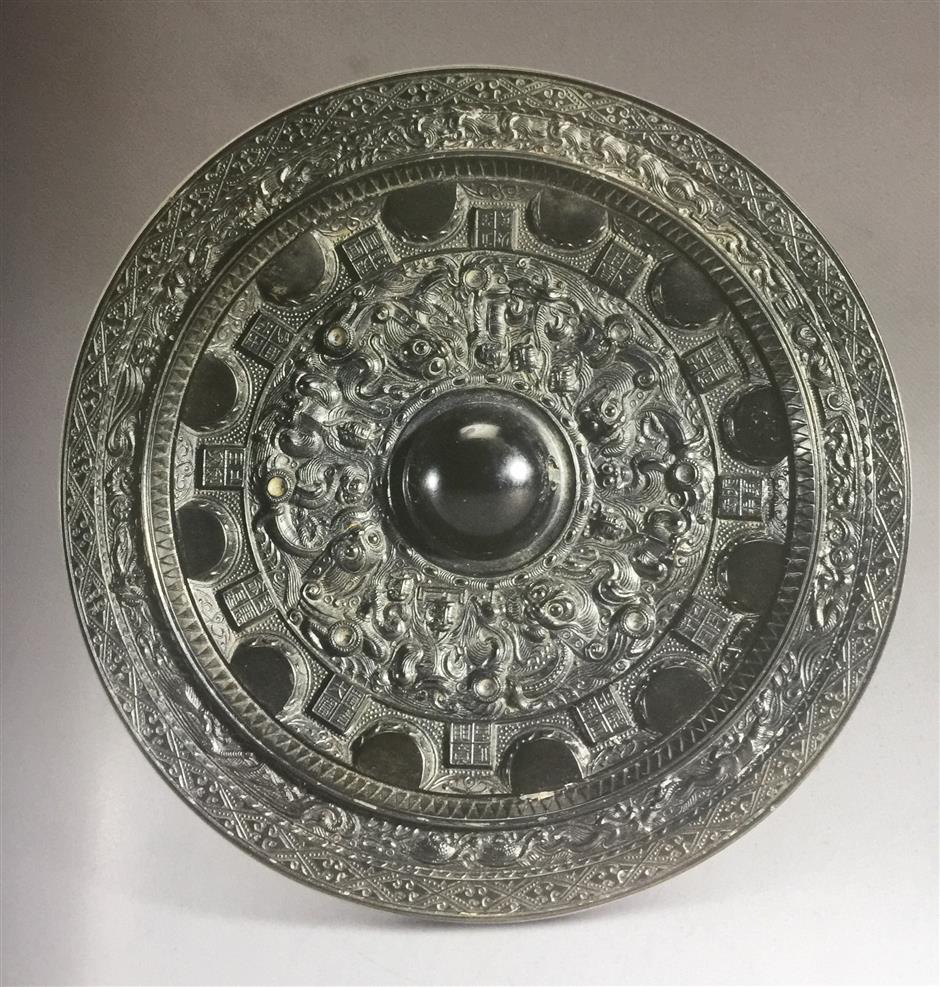 Like bronze sacrificial vessels, bronze mirrors were also made of an alloy of copper with tin and lead. However, according to Ma, bronze mirrors can be considered a separate art form.

“Bronze mirrors were daily necessities rather than ritual objects. They were two-dimensional rather than three-dimensional. Some patterns on the mirrors were never found on bronze sacrificial vessels but instead on other art forms of the same time like lacquerware,” says Ma.

The heyday of Chinese bronze mirrors was from the Warring States Period to the Tang Dynasty.

During the Warring States Period, systematic techniques of making bronze mirrors formed. In addition, some special techniques like openwork and turquoise, gold and silver inlay appeared. Majestic mirrors made then were excavated from the Chu Culture distributed around Changsha, capital of Hunan Province.

The character shan (山), literally mountain, was the most representative motif of the time. Some experts attributed the popularity to the special implication of mountain in ancient China. That is, stillness and peace. The ancient belief of mountain worship was also seen as one of the possibilities. However, many experts believed that the shan motif evolved from an earlier motif and had nothing to do with the character itself.

The mirrors made in the Han Dynasty became thicker and heavier. The hemisphere knob, replacing the cord-pattern one popular in the Warring States Period, became the basic form in later periods. In the mid-Western Han Dynasty, an auspicious inscription began to appear on bronze mirrors.

The “transparent” mirror exhibited in the bronze gallery of Shanghai Museum was the most representative form of the time. When a parallel beam of strong light strikes it, a magnified image of the decorative pattern on its back appears on the wall.

“Not until the 1970s did the experts of Shanghai Museum find the scientific theory behind the phenomenon. While the bronze mirror cooled and got polished, stress formed in the metal gave it variable elasticity, which made the reflective face bulge according to the outline of the pattern on the reverse side,” Ma explains. “However, the deformation can’t be seen by the naked eye.”

People in ancient times considered this kind of mirror a mystical object. Ma says the “magical” mirror might, in fact, have been created by accident.

Mirrors in the Tang Dynasty were of various shapes, but mostly round. Craftsmanship was further developed in the period when new techniques such as gilding and mother-of-pearl inlay were employed.

Mirrors with the motifs of grapes and auspicious mythical creatures were the best example of the time. Grapes, an import, were first brought back by Zhang Qian, a Chinese diplomat who opened the Silk Road in the Han Dynasty. Therefore, this kind of mirrors witnessed the cultural blending between China and other countries.

“Through the bronze mirrors, people can get a glimpse of different social status in different dynasties. Adding foreign elements to the design implies that the Tang Dynasty was open and peaceful,” says Ma. “The inscriptions on the Tang mirrors were beautiful and mainly depicted the aesthetic value while those on the Han mirrors were straightforward and featured wish for good fortune as wars were common during that period.”

In the Song Dynasty, bronze mirrors became more affordable and popular. However, the craftsmanship wasn’t so exquisite as before. At that time, Huzhou in Zhejiang Province was the center of production.

“The bronze mirrors made in the Song Dynasty were not so much a work of art as a commodity. Intriguingly, I once saw a mirror of the time cast with the inscription roughly reading, ‘Those copying my mirror are worse than pigs or dogs’,” says Ma. 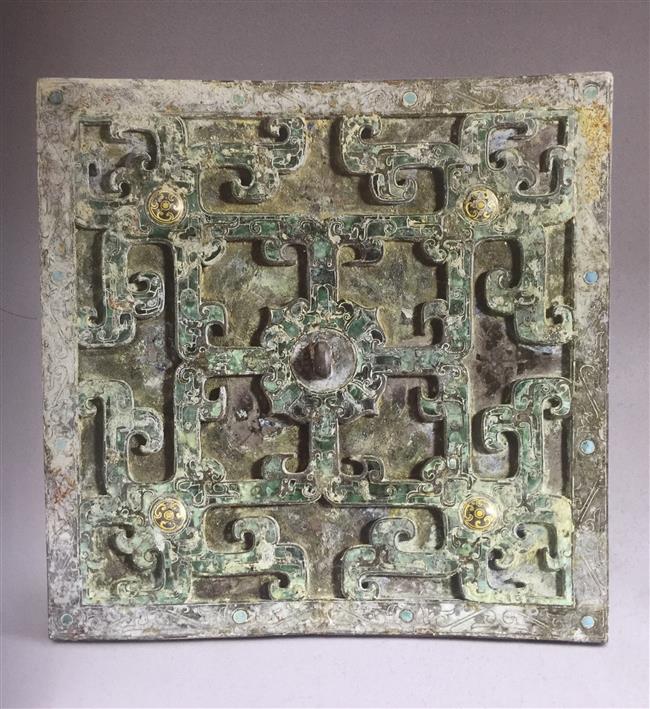 There are 12 nipples on two sides of the frames respectively, between which there is a double-head dragon pattern. Four gold-inlaid nipples are set on four corners. Turquoise is inlaid in the back. The bright spots on the back of the mirror face might be the traces of colorful motifs which have now faded. 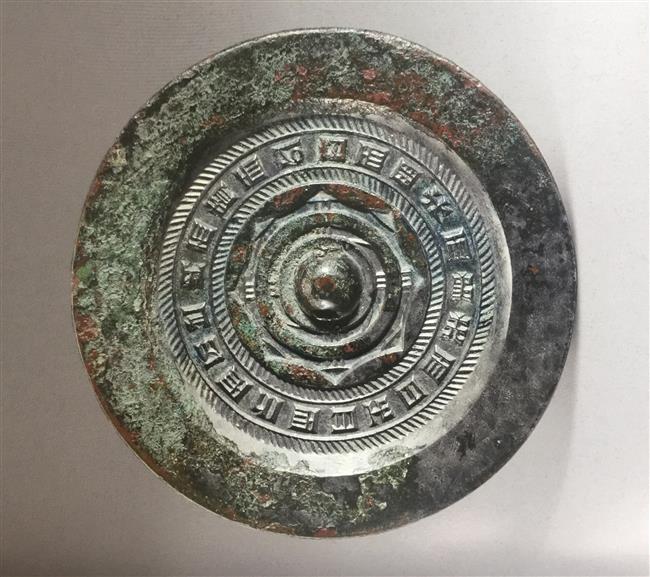 This mirror, now displayed at Shanghai Museum, is cast with a hemisphere knob which is encircled by 21 characters, beginning with nei qing yi zhao ming, meaning “the mirror is clear and bright.” This style of mirrors, called Zhaoming mirrors, were popular in the late Western Han Dynasty.

Mirror with the motifs of auspicious animals and grapes 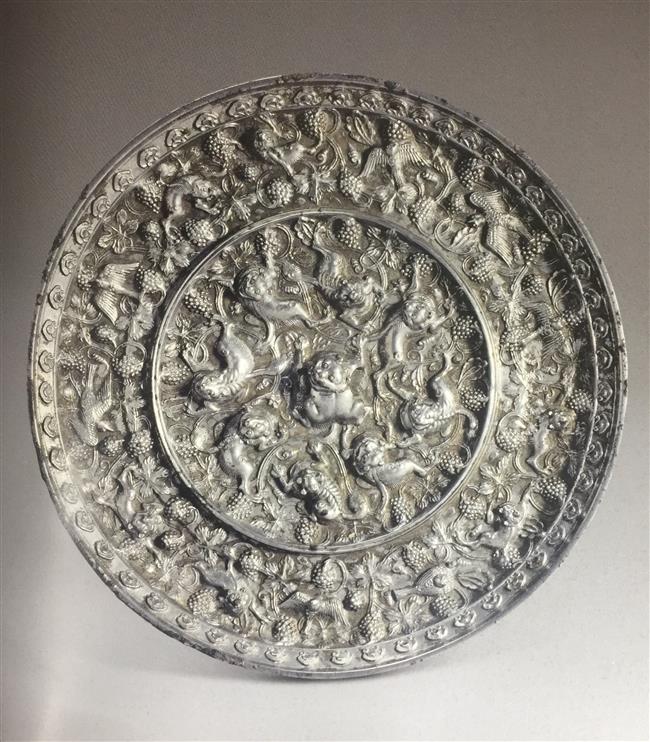 It is a typical Tang Dynasty mirror decorated with the motifs of grapes and auspicious creatures called suanni, one of the nine mythological sons of the dragon. In the inner ring, there are eight suanni in different positions, while in the outer ring, there are 55 blossoms, seven birds, three couples of suanni and several bunches of grapes.

Mirror with an immortal subduing an evil sprite 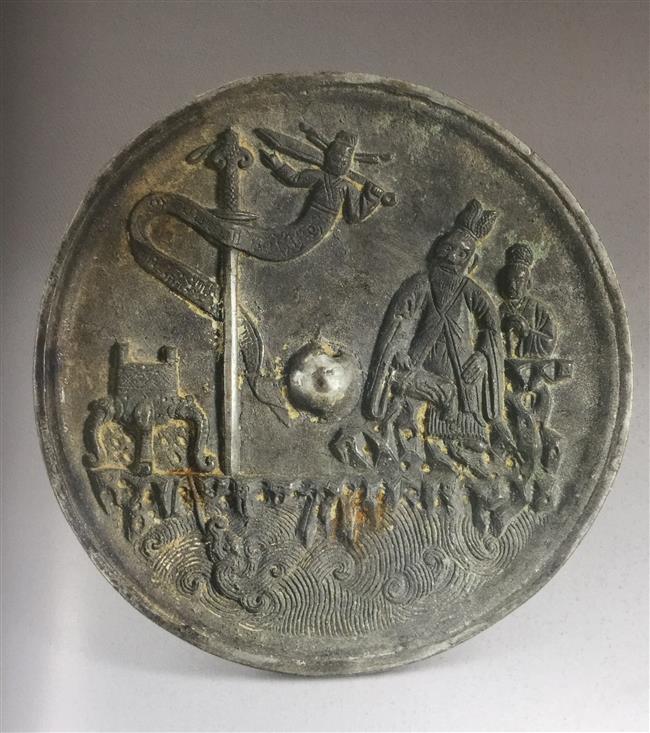 It is a Taoist mirror portraying an immortal on the right subduing a demon. The monster has a human face and a snake body. A ding, one of the most important vessels in the Chinese ritual bronzes, is placed beside a long sword.