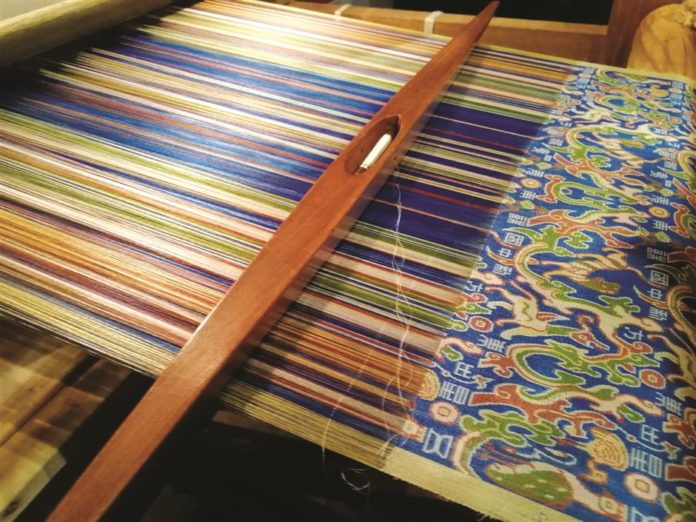 On a recent episode of “National Treasure Season 2,” Zhao Feng, director of China National Silk Museum, revealed to the nation how a Han Dynasty (206 BC-AD 220) pattern loom replica could recreate a historic brocade design made 2,000 years ago.

The ancient Chinese is believed to have invented the world’s earliest hand loom, which produced intricate patterns on cloth. But people today are largely in the dark to how they did it.

But, for the first time since the Han Dynasty, weaving techniques have been revived in an original way. Zhao called the loom “a pre-programmed computer.”

The historic brocade was excavated from an ancient tomb in Xinjiang Uygur Autonomous Region in 1995. The discovery is considered to be the one of the most important Chinese archeological finds in the 20th century.

The brocade is an 18.5 centimeters by 12.5 centimeters rectangle piece with three silk straps attached to it at both ends. Red, yellow, blue, white and green — silk yarns of five colors, which correspond to the five elements (五行, wuxing), are woven into auspicious patterns including phoenix, tiger, qilin (a mythical propitious beast), lingzhi mushrooms, stars and clouds.

But what surprised archeologists at the site were the Chinese characters on the brocade, which say when the five stars (Mars, Mercury, Jupiter, Venus and Saturn) appear in the East it will benefit China (五星出东方利中国). This divine reading comes from an astrological chapter of the Records of the Grand Historian, written by Si Maqian in early 1 BC.

In 61 BC, in a war against the Qiang minority, then occupying the northwestern part of China, the Western Han Dynasty (206 BC-AD 25) general Zhao Chongguo used the prophecy, and military strategy, to encourage his soldiers and repel the enemy.

When the brocade was found, it was tied to the arm of the deceased, together with bows and bow cases, scabbards and other funeral objects. Archeologists speculated it should be used for protective reasons when shooting arrows.

Reproduction is good for the preservation of the antiquity and also makes more exhibitions to the public possible. Production work started in 2015 and the first problem came when trying to restore the intact fabric and pattern because the ancient fabrics are extremely fragile.

The silk arm armor appears to have been taken from a complete bolt of fabric. In the same tomb researchers found another small brocade fragment, with recurring patterns and three different characters, which could be added up to the words on the armor in meanings.

After more research and comparison with similar fabrics and with historical records, Zhao and his team finally confirmed that there should be 21 characters on the entire brocade at a width of 48 centimeters.

But the difficulty also multiplied.

“If you only reproduce a proportion like the size of the armor, you need around 3,000 to 4,000 warp threads. But for the size of the entire fabric, you will need more than 10,000 warp threads operated on the loom,” said Zhao. In a conventional treadle loom, the multiple heddle frames (or shafts), where warp threads are arranged and fixed, are controlled by foot treadles, one for each frame.

With the complexity of the brocade pattern, there needs to be 84 shafts and therefore 84 treadles on the loom to pair with, which is almost impossible for the weaver to operate on. But, a Han Dynasty pattern loom model, unearthed from a tomb in Chengdu in 2013, gave them a clue.

“We have been thoroughly researching Han Dynasty weaving technologies for many years. So the excavation did not overrule our findings,” said Zhao. “But what we did not expect was the use of a movable toothed rod.”

The rod hangs above the shafts and is connected to them via a hook beam. When the weaver finishes one weaving operation, he or she may move the rod up to the next slot to select the desired shaft, then raise the shaft and repeat the operation all over again. The treadles on the loom can be then reduced to only three, with one used for raising shafts.

The duplicate brocade now being exhibited in the museum’s Weaving Gallery, was manually made on a wooden hand loom modeled on the excavated Chengdu loom.

Zhao told Shanghai Daily it took more than a year to finish threading the loom, which requires each warp thread to be passed through the hole of a certain heddle and also the correct assembling of these heddle frames.

“The threading is the most important part in the whole weaving process. It is like installing programs on a computer. Once it is done, the weaver just needs to sit down and perform all the steps in order,” added Zhao. 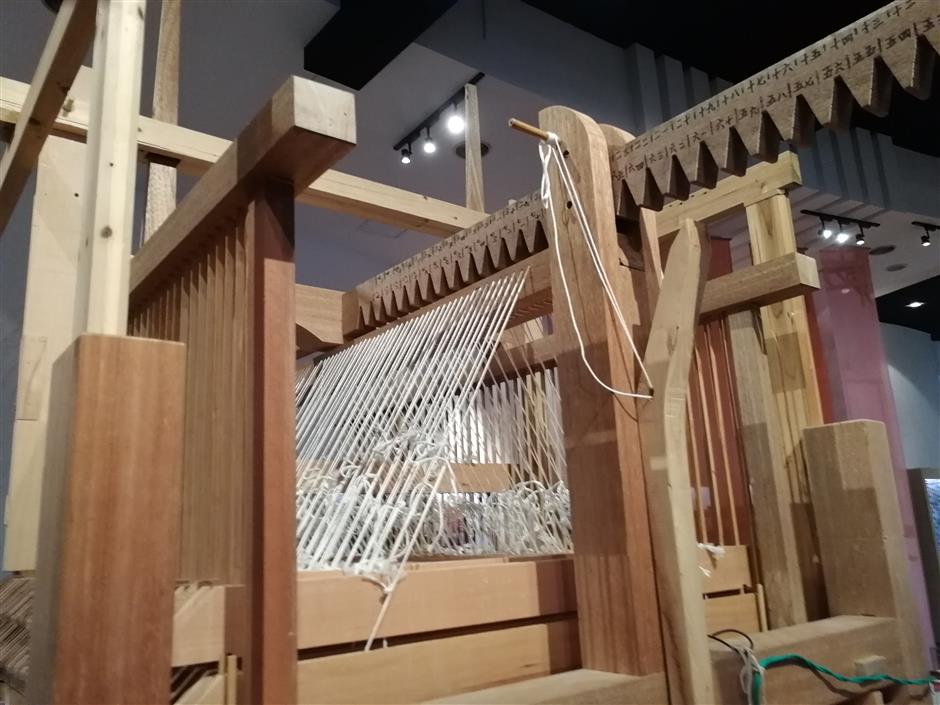 The loom components, including the toothed rod, are used to select a certain shaft.

On the “National Treasure” program, when the loom was presented on stage, the host Zhang Guoli was very excited to try it himself. He completed one weave without any difficulty after a simple instruction by the museum staffer aside.

The transportation of the loom from Hangzhou to the production site near Beijing was also not an easy task.

“At first our engineer rejected the request (of the show). Because the loom needs to be carried as a whole, not a single thread or beam can be moved,” said Zhao. “If one thread is broken, you will have to start all over again.”

In the end the team figured a way to fix the components of the loom internally. The loom returned intact and is now still being operated every day in the museum.

Zhao revealed their next plan was to restore the original color of the yarns using natural dye, as what the ancients had done before.

“I hope that more people will be able to see and be amazed by the sophisticated textile technology of our ancestors,” Zhao added.