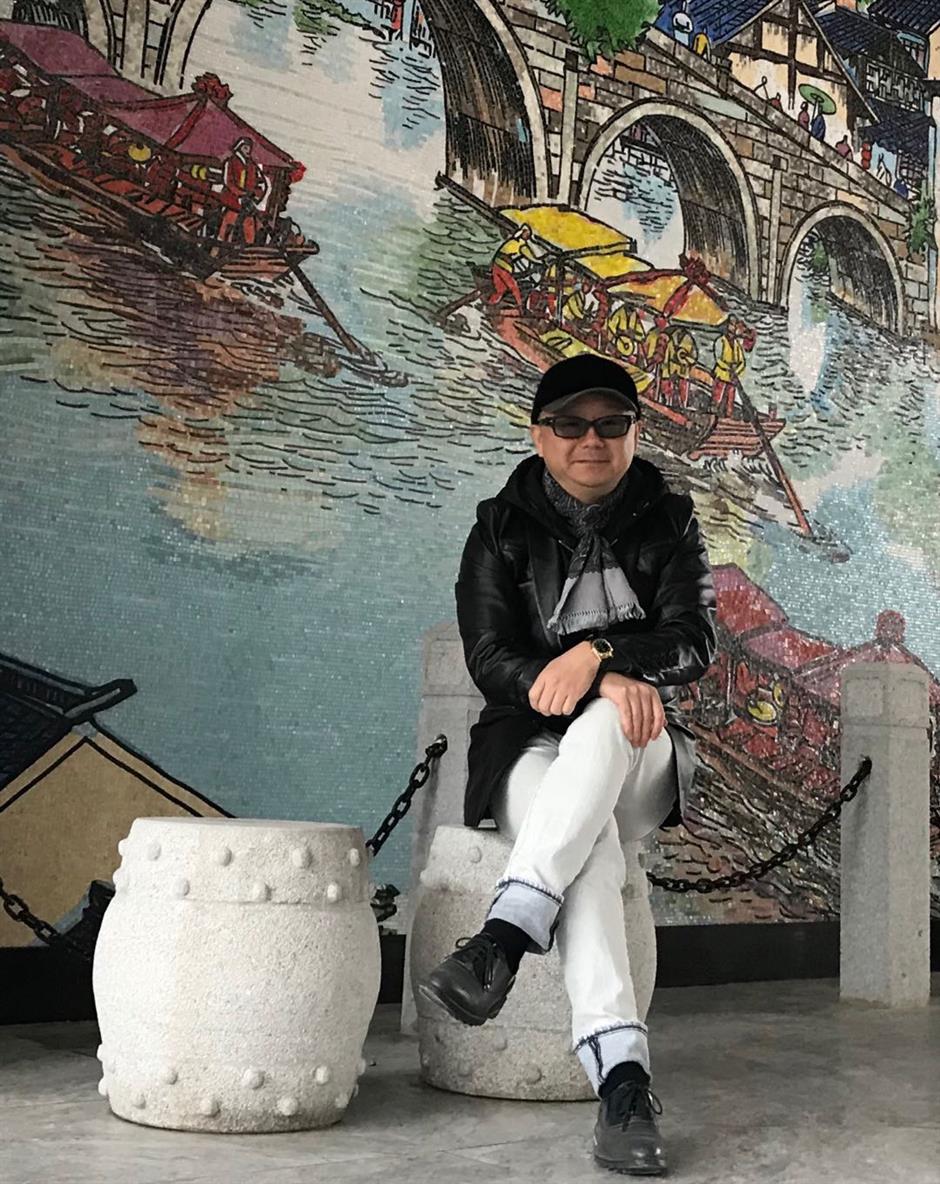 Public art equals urban sculpture! It’s a thought that has long been rooted into the minds of many local citizens.

When something new starts to fuse in public art in the city, it can be challenging.

Some art installations that featured giant artificial flowers and exotic statues of goddess were removed from Fuxing Road W. in Xuhui District following widespread controversy as to their appropriateness.

In fact, it was an art project that was promoted by the Xuhui government.

Another example is a wall painting created by Camille Walala, a renowned UK artist noted for her brilliant colors. It is said that this “wall painting” outside a local gallery on Yuyuan Road was her first public art in Asia.

She has done similar work elsewhere in the world.

However, this work didn’t last long, and the gallery was asked to repaint to its original white wall to maintain the visual integrity of the neighborhood.

It’s a dilemma — how does one strike a balance between “forward” and “backward?”

To try and get answers to some of the predicament, Shanghai Daily spoke to Xi Yaoyi, the director of a series of public art projects at some stations on the city’s Metro lines.

Xi and his team recently implemented the second and third phase of the public art project at the Chenchun Road Station on Metro Line 13.

His inspiration came from “The Dwelling in Fuchun Mountain,” which is considered one of the greatest surviving masterpieces of Huang Gongwang (1269—1354).

Painted between 1348 and 1350, the Chinese landscape painting snapped into two pieces in 1650. Today, one piece is with the Zhejiang Provincial Museum in Hangzhou, while the other piece is at the National Palace Museum in Taipei.

At the Chenchun Road Station, passengers are welcomed by a cluster of umbrellas hanging upside down from the ceiling, behind which is a large screen made of glass that is influenced by “The Dwelling in Fuchun Mountain.”

The 20-meter-long and 1.5-meter wide glass screen unveils a long ink-wash scroll, in which two new characters are added to strengthen the narrative power in the work. These two characters remind the viewers of the hero and heroine in Louis Cha’s martial arts novels, revealing a Chinese humanistic feeling plus a chivalrous spirit.

Since its trial opening at the end of last month, the work has been favorably received by the public.

Q: As a person who has been involved with public art for more than a decade, what makes a quality artwork?

A: A high quality public art piece must guide the aesthetic taste of the public. It’s not about what the response or attitude of the public is toward this artwork.

A quality piece must have a strong personal expression, which sometimes may not be easily accepted by the public. Then how does one find a balance between the two is a challenge for the designer.

Q: How do you find such a balance?

A: Good question! Each suggestion is a challenge for the designer. Apart from the plan itself, there are many human factors such as the suggestions from the management level, from the government and from the public. Some of the suggestions might be bought in and some not.

As an artist, the first priority is to work out a perfect plan that would be in harmony with the environment. In my eyes, the failed example on Fuxing Road W. has largely got to do with the artist for a lack of understanding of the background in this historical area.

The city administrators should also level up their aesthetic taste. Better to go forward than backward.

Q: In your eyes, what is the most difficult part of doing public art in Shanghai?

A: Different from pure art, public art is akin to a process to “answer the question,” a very passive job when compared with professional artists who are positive about the creations. Because public art is a combination of art and environment.

As a matter of fact, their artworks could be displayed either in the exhibition hall or in the public space. That’s why artists of public art know better of how to compromise, and of course, such compromise is based on certain principles.

It is also a difficult mission to insist the natural artistic trait of public art, shying away to treat it merely as a decorative piece.

Q: Many think that the knowledge and technology go far beyond pure art. Do you agree?

A: Yes, today public artists need to expand their scope of knowledge with a grasp of the understanding of different materials and technology.

Perhaps in the past, an individual artist could live his entire art life on one material only, such as plastic, stainless steel, copper or iron.

But today public art should not be limited by one material only. For example, we’ve used a combination of glass, industrial resin and porcelain for the public art at about 17 stations on Metro Line 17.

Q: You used the traditional art elements in the latest Metro art project. What inspired you?

A: It is a requirement from the management level. I immediately thought of using traditional ink-wash painting, as the varied shades of ink and water were perfect to reflect the Chinese spirit.

Later, we were required to add some scenario in the work with a chivalrous spirit, then our team tried to draw the painting in sketches or cartoons.

But I found that the final visual impact was not satisfactory. I insisted on using the ink-wash style which would conjure up a real yet abstract black and white world. Luckily, it proved perfect between a taste of the public and art itself.

Q: What’s special about doing public art in the Metro?

A: The venue is special. It is a half-isolated space, and the work needs to be notable without getting in the way of the large crowds. 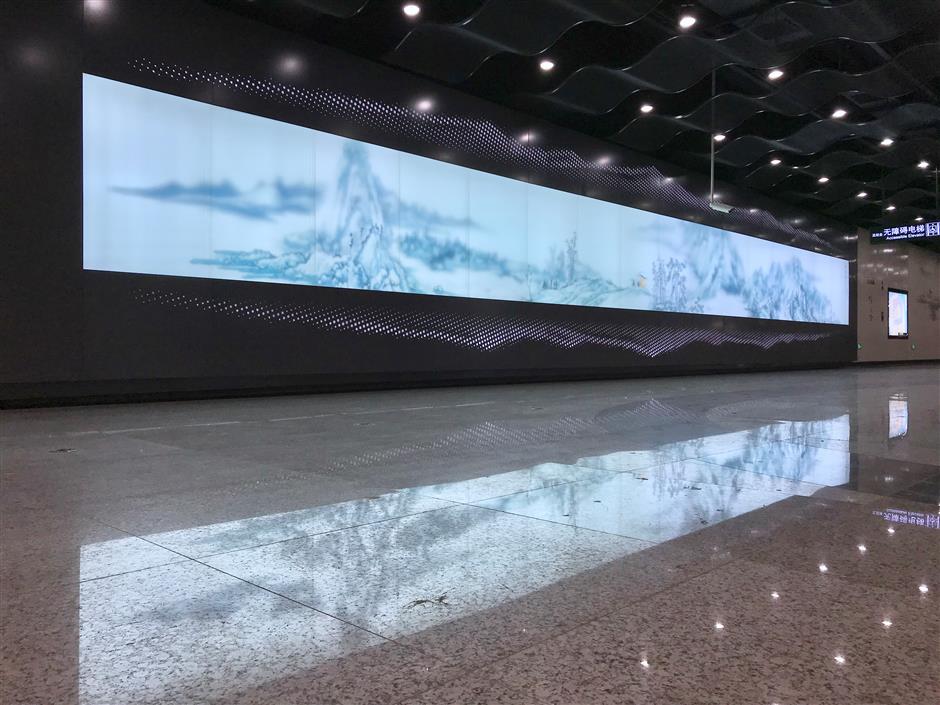 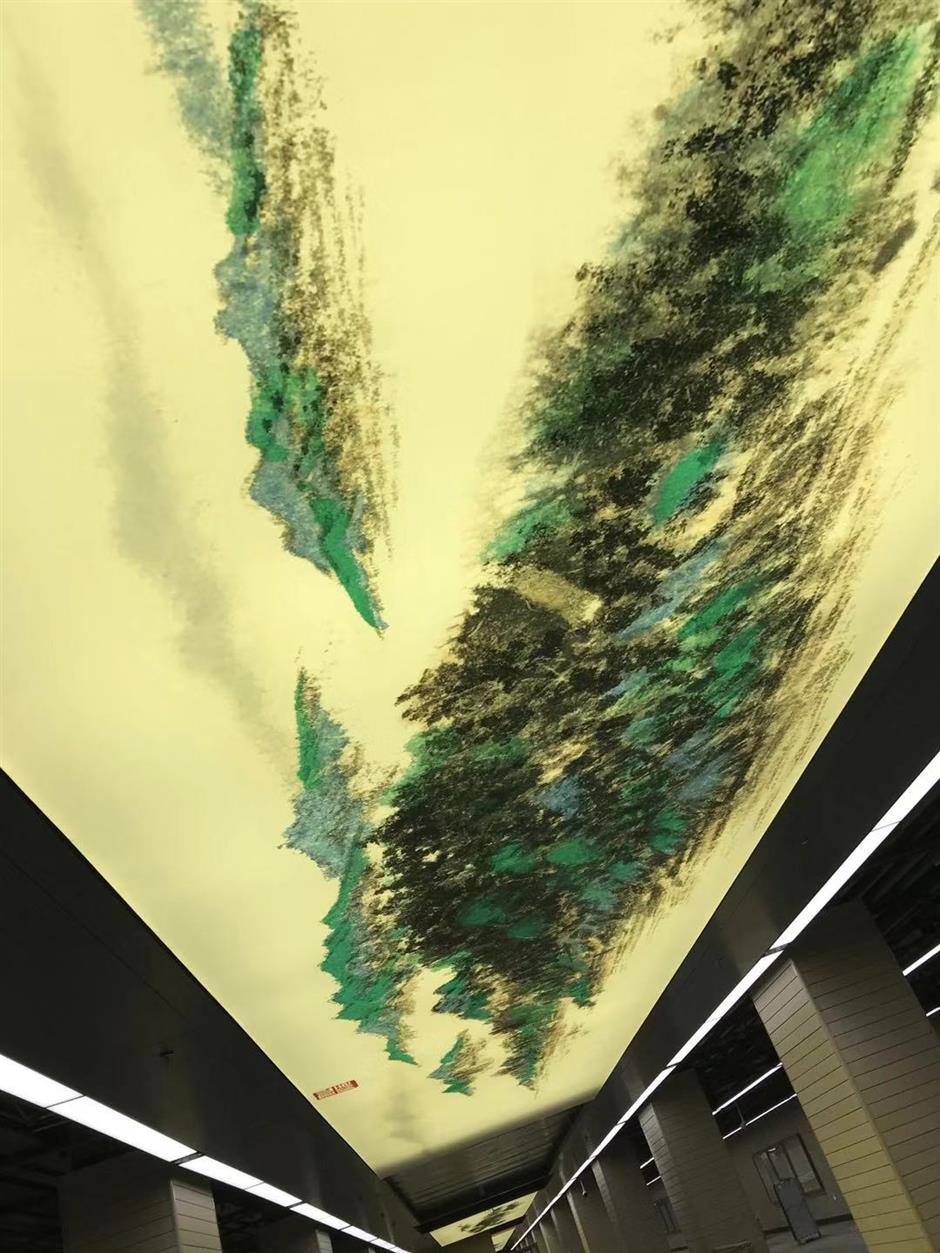