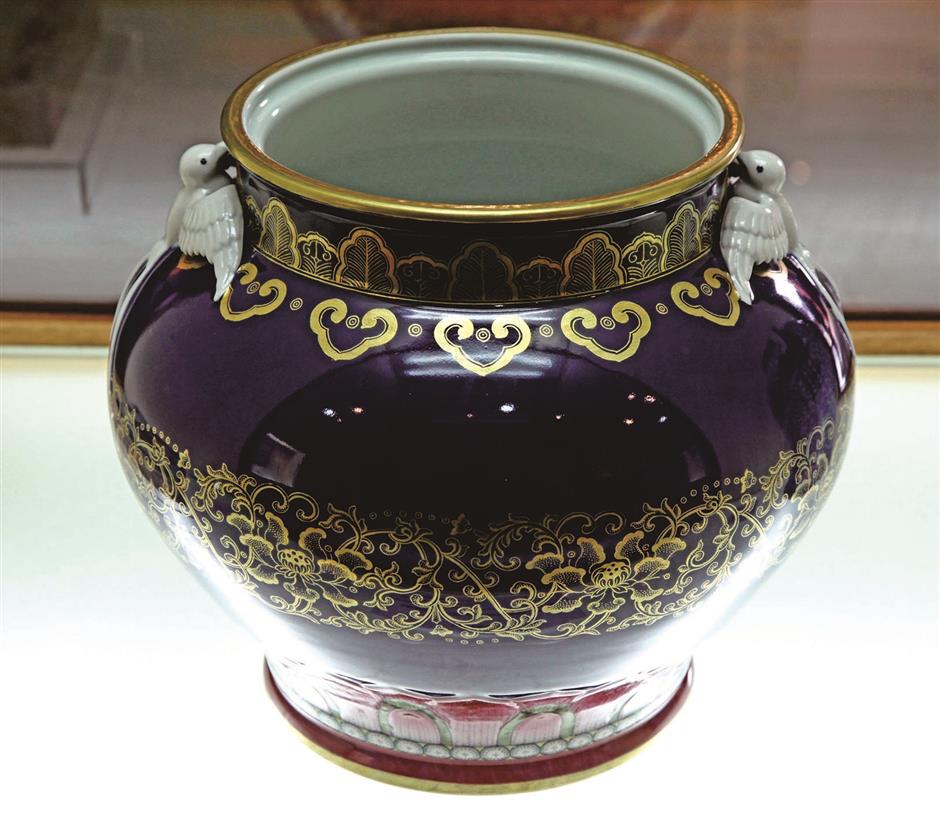 eramics are one of the most significant forms of Chinese art. The evolution of Chinese pottery is fascinating to trace, as each dynasty had its own style.

In the early Qing Dynasty (1644-1911), pastel colors and meticulously painted illustrations were a frequent feature. Standing at 31.3 centimeters tall, the indigo-glazed double-swallow-handled pot with designs of coiling peonies outlined in gold is a masterpiece from the early Qing Dynasty under the reign of Emperor Qianlong (1711-99).

The ceramic has a straight mouth with a slightly out-turned lip. Its short neck leads to a convex belly and circular base.

Pink lotuses decorate the base, while lotus petals are outlined in gold on the neck. Two delicate white-glazed sea swallows serve as the ceramic’s handles.

The base of the ceramic reads: “Made in the Qianlong period of the Great Qing.” This national treasure was fired following Emperor Qianlong’s explicit instructions. It was found in the Haiyan Hall — Hall of National Peace — of the Old Summer Palace.

The Old Summer Palace is renowned for its blend of typical Chinese scenery and Western architecture. It was first built by Emperor Kangxi (1654-1722) in 1709 as a gift to his son, Emperor Yongzheng (1678-1735). The expansion of the palace lasted for 150 years, also fondly known as the Versailles of the East.

Elaborate statues and fountains adorned the Haiyan Hall. Twelve bronze sculptures representing the Chinese zodiac could be found in front of the hall, surrounding a fountain pond. Every two hours, a different animal fountainhead sprayed water. At noon, all the fountainheads would spray together.

To further beautify the hall, Emperor Qianlong instructed the royal kiln to fire a pair of identical porcelains.

The potters worked tirelessly, yet nothing could satisfy the emperor. It turned out that Emperor Qianlong had a certain style that he had in mind. He wanted the ceramic to have a coat of indigo glaze and white sea swallows as the handles. 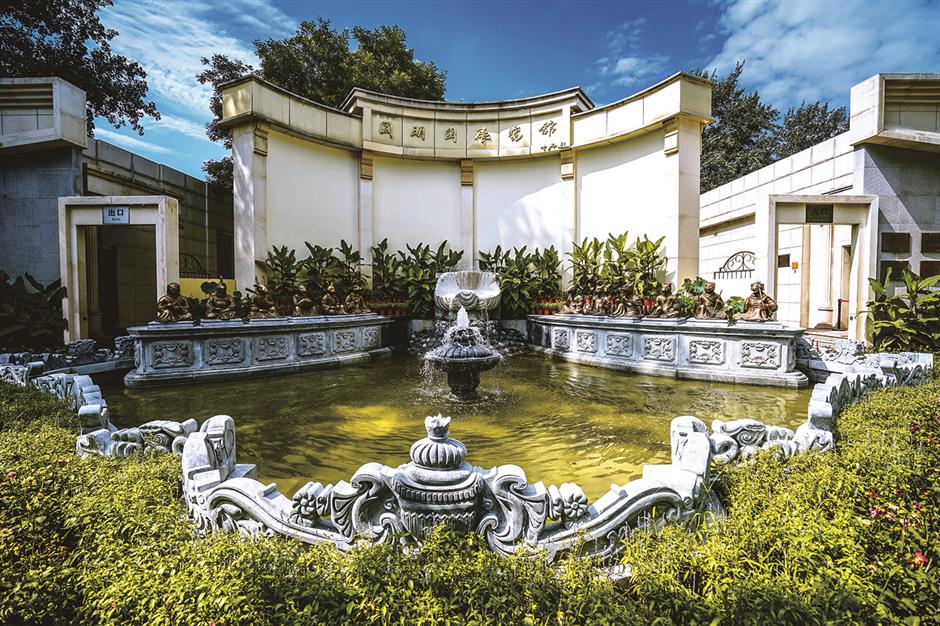 With the emperor’s specific request, the potters became very strict with their work. On his 50th birthday, the handcrafted porcelain was gifted to Emperor Qianlong. He was elated as the white sea swallow, haiyan — homophonic of the Haiyan Hall, symbolizes world peace, suggesting that the nation would enjoy peace under his reign.

In 1860, when Anglo-French allied forces began to advance on Beijing, Emperor Xianfeng (1831-61) was celebrating his 30th birthday at the Old Summer Palace. The incompetent emperor was sent into a frenzy when he knew of the invasion. He quickly summoned his officials to think of a solution.

One of the officials secretly moved the indigo-glazed ceramic to the emperor’s bookshelves.

The next morning, the emperor was shocked to see the vase on his bookshelf. One of his officials commented: “Emperor Qianlong received this ceramic on his 50th birthday, when the nation was at peace. Having this vase appear mysteriously in front of us today must mean that we will continue to enjoy such peace too.” Foolishly believing such advice, Emperor Xianfeng decided to resume his birthday banquet for four consecutive days. Due to such folly, the Anglo-French allied forces invaded Beijing.

The Old Summer Palace was destroyed, and dozens of cultural relics were looted. As for the set of ceramics, one was stolen and shipped overseas while the other vase miraculously survived.

The Haiyan Hall was largely destroyed in 1860. However, an imitation of it was constructed under the request of Empress Dowager Cixi (1835-1908) in 1900. Her former residence, the Hall of Ceremonial Phoenixes, was in ruins from the invasion of the Eight-Nation Alliance. To liven up the place, Empress Dowager Cixi instructed the reconstruction of the Haiyan Hall at the Hall of Ceremonial Phoenixes.

An official named Zhang Wenda was tasked to have a plaque made for the hall. Zhang felt that using the same title “Haiyan Hall” would be disrespectful to previous emperors. This only enraged Empress Dowager Cixi. As a show of power, she demanded to have the indigo-glazed ceramic moved to her new Haiyan Hall.

After the 1911 Revolution, the hall was renamed Juren Hall and functioned as the office headquarters. It also served as living quarters for warlords such as Feng Guozhang (1859-1919) and Cao Kun (1862-1938).

The Haiyan Hall was eventually destroyed in the 1950s, and the indigo-glazed ceramic was moved to the National Museum of China in Beijing.