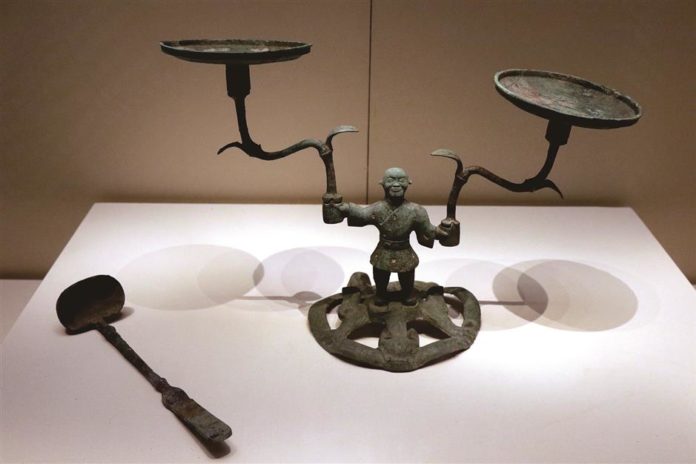 Darkness is one of humans’ primordial dreads. For modern people, life without electric lights is hard to imagine. Before the artificial lights, intelligent ancient Chinese used oil lamps to produce light.

Every lamp stand is composed of a pedestal, a handle and panels. They were mainly only used by the aristocracy at that time,

The most representative style of its kind is in the shape of human.

Male or female, standing or kneeling down, covering one to three panels, the figures are of a variety of kinds.

Unearthed in the Gebu Village of Zhucheng, a county-level city in Shandong Province, in 1957, the man-shaped bronze lamp stand is typical of the Warring States Period.

Exhibited in the National Museum of China in Beijing, the relic was once placed in the court of Qi, a state of the Zhou Dynasty-era (1046-256 BC).

With muscular body and calm facial expression, the man wearing a short tunic stands on a coiled-dragon pedestal.

Opening his arms, the man holds two handles supporting the panels. The handles are cast into the shape of curved bamboo with leaves.

To connect the handle and the panel, the mortise and tenon joint is applied.

The figure is a warrior, of which the design is closely associated with the warlike state.

Early in the Warring States period, Qi conquered a number of smaller states. Back to the Xia (2070-1600 BC) and Shang (1600-1046 BC) dynasties, the ancestors of the Qi State had been already famous for their excellence in archery.

It is said that two legendary figures from ancient Chinese mythology, Chiyou, a tribal leader of the Nine Li tribe, and Hou Yi, an archer shooting down nine of the 10 suns, were born in the Qi State.

According to ancient literature, Qi warriors are bold but conceited and isolated. Occurring in the Qi State, the story called “two peaches kill three warriors” echoes their characters.

During the Spring and Autumn period (770-476 BC), Tian Kaijiang, Gongsun Jie and Gu Yezi were titled as three great warriors of the Qi State.

Making great contribution, the three men were well-known as arrogant.

At that time, Tian’s family was very powerful and even threatened the dominance of the king.

Yan Ying, more widely known as Yanzi who served as prime minister to the state of Qi, was worried that Tian, as a member of the Tian clan, would incite other two warriors to overturn the state.

Therefore, Yan decided to get rid of these three “troubles.”

One day, Duke Zhao of Lu visited the state of Qi. Attending the banquet, the three warriors wore swords.

Hitting upon an idea, Yan asked people to serve the kings big and fresh peaches.

Two peaches were left. Yan suggested the Duke Jing of Qi award the peaches to the officials according to the contributions that they made.

Just then, Gongsun came up to the ruler and claimed that he should be awarded with a peach as he once bit a tiger to death and saved the life of the monarch.

“Risking his life to rescue the king can be regarded as a big contribution. Gongsun Jie is allowed to be awarded with a cup of wine and a peach,” said Yan.

Drinking and eating in front of the public, Gongsun looked like the cat that swallowed the canary.

“I once crossed the Yellow River with the king. A huge soft-shelled turtle dragged the horse that the king rode. I jumped into the water immediately and chased after the turtle for a long time. Finally, I killed the evil and saved the king. Therefore, I ought to be given a peach,” said Gu.

Yan agreed with Gu and awarded him with a peach.

Finding that both Gongsun and Gu had been granted with peaches, Tian burst into anger. He listed his numerous accomplishments on the battlefield.

“Beating a tiger and killing a soft-shelled turtle, both are not big deals. I made such a big contribution to the country but still couldn’t eat a peach. What a burning shame it is,” Tian said indignantly, committed suicide with his sword.

Feeling ashamed, Gongsun and Gu killed themselves as well.

Yan finally achieved his goal. Without lifting a finger, he was able to remove the three potential threats to the state of Qi.

Included in the ancient Chinese text “The Yanzi Chunqiu” or “Annals of Master Yan,” the story evolves into an idiom “kill with a borrowed knife,” meaning attacking by using the strength of another.

A bronze ladle with a long handle was found together with the man-shaped lamp stand. It is used to scoop out oil.