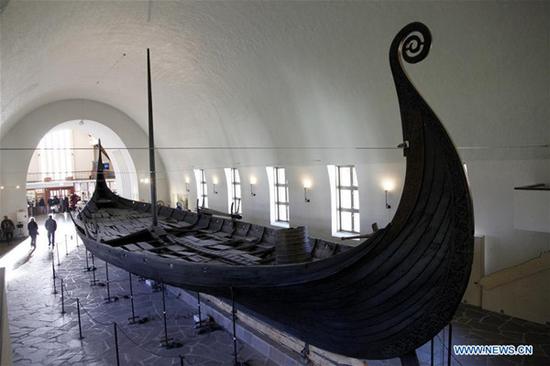 Norway’s famed Viking ships, considered parts of the country’s most iconic cultural heritage, are in danger of “total breakdown” due to lack of enough funding, experts have warned.

Only three well-preserved Viking ships have been found in Norway in the past. All of them were excavated more than a century ago and are now displayed at the Viking Ship Museum on Bygdoy, a peninsula near the city centre of Oslo.

“They are in a poorer condition than we first believed,” Hakon Glorstad, director of the Museum of Cultural History and professor of archeology, told Xinhua.

The Viking Ship Museum, which is one of Norway’s best-visited attractions with over half a million visitors every year, is part of the Museum of Cultural History at the University of Oslo.

Glorstad said the supporting systems for the ships are not good enough for carrying their weight. “So slowly gravity is breaking down the ships and this is what worries us today.”

“That kind of damage is not possible to repair. This outstanding heritage will be destroyed forever,” he said.

During the past year, “disturbing” damage has been discovered on both the Gokstad ship and the Oseberg ship. Emergency support was required on the Gokstad ship this summer after parts of the hull began to sag, according to a press release from the University of Oslo.

“Look for a Norway without the Viking ships at Bygdoy. This scenario can be a reality without the necessary grants for a new Viking museum,” the press release warned.

As the Viking Ship Museum is too small to cope with increasing visitors and the climate inside the building is not good enough for preserving the ships for the future, it has been planned to build a new Viking Age museum complex with the current museum as an integral part, Glorstad said.

In addition to a three-fold increase in the size of the exhibition area, the new museum complex will include a restaurant, auditoriums, large shops, improved conditions for guided school tours, laboratories with public access and space for the establishment of a research centre, according to the plan.

However, caretakers of the cultural heritage were shocked to learn that the prized Viking ships have not been granted necessary financial support in the government’s recent budget proposal for 2019.

“We have done a lot of preparations and planning for a new support system, for new conservation and a new building, but we lack funding for doing these in reality for realizing the plan,” Glorstad said.

“There is no funding (for the new museum) and that is what surprises us because we had expected funding for this project in the state budget,” he said, adding that they were working with the parliament to seek its support for speeding up the work in rescuing the ships.

The new museum would open to the public in 2023 or 2024 if the project could start now, Glorstad said. “We can’t wait another year.”

“It is important for us to speed up the plan because this new museum is crucial for taking care of the ships and the finds for the future,” he said.