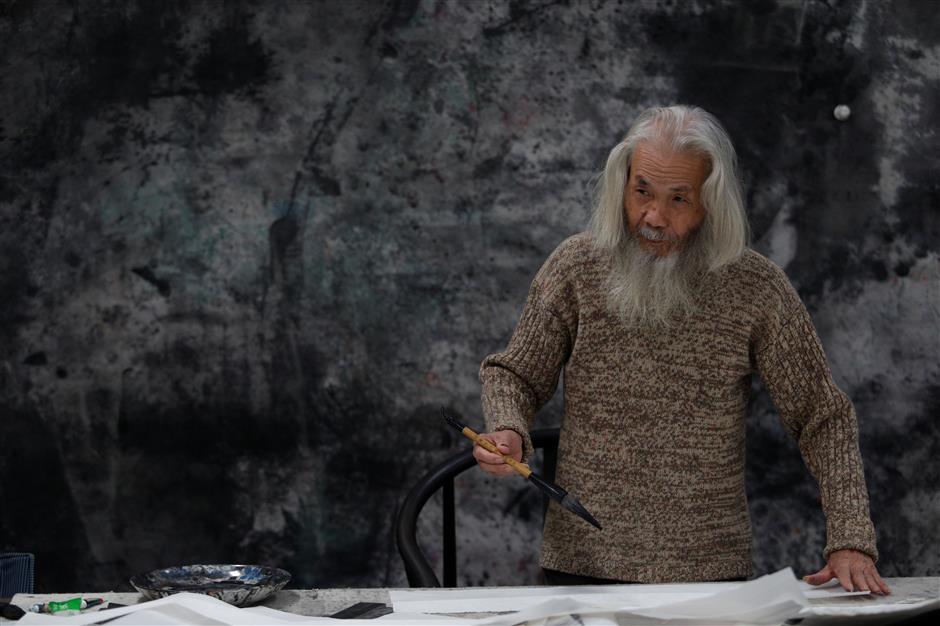 With contemporary art shows taking the limelight at the West Bund during the recent art week, it was refreshing to witness Shen Aiqi’s traditional ink painting exhibition take the breath away of viewers last Wednesday at the Shanghai Institute of Visual Art Museum in suburban Songjiang District.

“Master Shen’s leaping waves of ink, galloping brushstrokes and complex, energetic forms dazzled the eye. Here the viewer is witnessing not only the forms of mountains and rivers, hills and valleys, but the emergence of something that lies beyond the physical landscape. This is a new interpretation of traditional ink painting, which is unique to the artist,” said Chang Tsong-Zung, curator of the exhibition.

Taking up two floors of the exhibition hall, Shen’s solo exhibition, which runs through November 24, features about 100 of the artist’s ink-wash paintings in two categories: the bird series and the shanshui (the painting of scenery or natural landscapes with brush and ink) series. 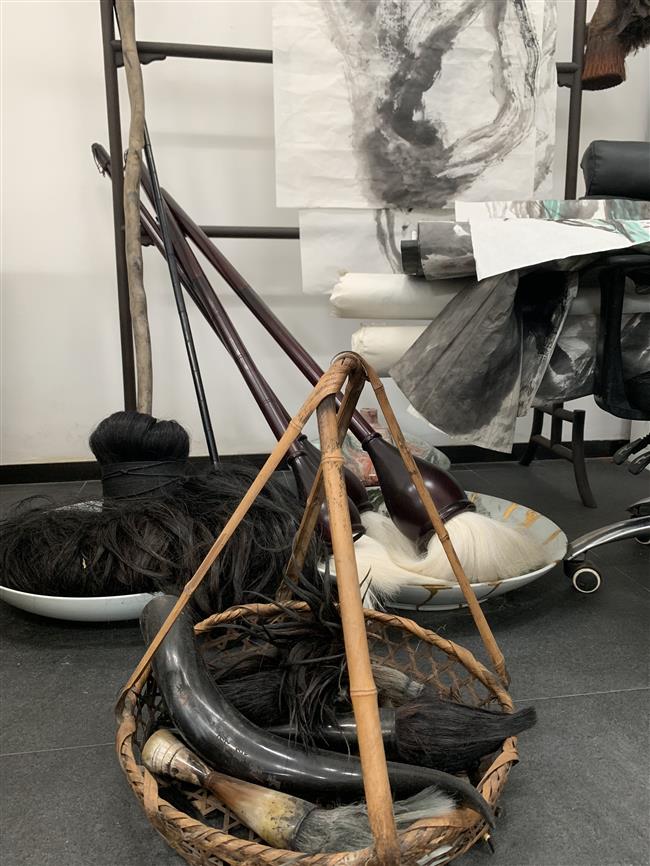 The brush pens used by the artist

Shen was born in 1941 in Erwugou, Hubei Province.

Unlike most of the kids who liked little toys such as balls and model cars, Shen said the sun, moon and the stars were his playmates in childhood, and he enjoyed most to lie on the big outdoor bed in the family tomb of the village on a summer’s day, watching the clouds float across the sky.

“Their traveling across the sky is a delightful sight. Their varied shapes mean different things to different people. They scatter light and paint the sky in varied colors,” recalled the 78-year-old.

In his youth, Shen studied painting with master Xu Song’an, and he has been painting ever since. He used to draw small pieces of New Year’s cards for export in the 1950s, be assigned large-scale wall works to decorate the community wet markets in the 1960s and worked as a film poster painter in the 1980s. But all were temporary jobs.

“I don’t like to be grounded for a certain style,” said Shen.

“We are all temporary passers-by in the universe. Why should I take up a permanent job for the living?”

Obeying his master’s instruction to wait for the right time to present his works and “not to hold an exhibition before 60, Shen held his first solo exhibition at the Wuhan Art Museum in 2011, and his second in Hong Kong in 2014. 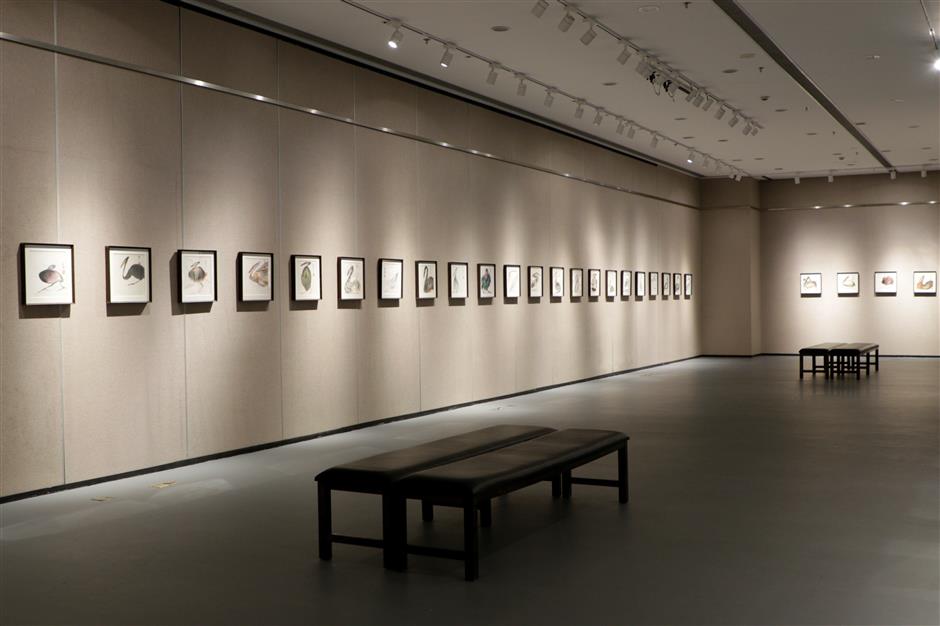 The bird series by Shen Aiqi is on display on the first floor of the Shanghai Institute of Visual Art Museum. 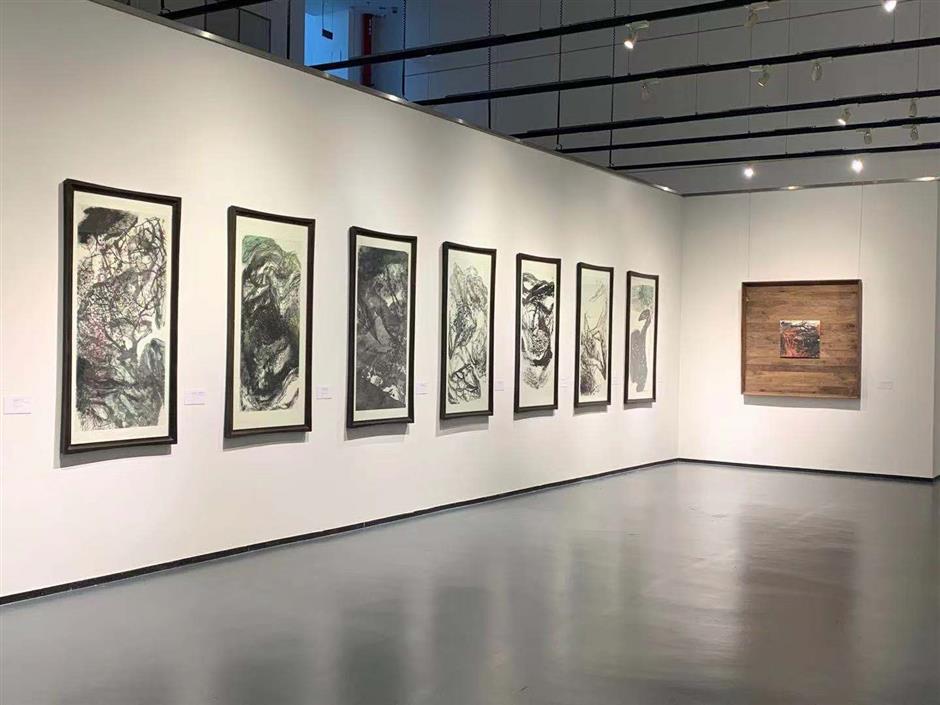 Shen’s shanshui (the painting of scenery or natural landscapes with brush and ink) series is on display on the second floor.

“Those who have viewed his vast and unique oeuvre marvel that in the millennia-long history of Chinese landscape painting, this is the first time that a body of works depicting such an untrammeled, primordial view of nature have been gathered together,” said Liu Li, a curator based in Shanghai, who visited Shen’s studio in Wuhan in 2014.

“I remembered his studio was full of branches of different trees, as if he was living hidden in the deep state of nature, which makes you feel small, yet united with all things in the universe where the artist is constantly contemplating the very force of life.”

“All my life has been a preparation, seeking a way to fully merge the art of brush-and-ink with the art of life, so like the soil it can be planted with new seeds that will bloom and spread over time and space,” Shen said of the exhibition.

“For many years I have been refining my process, refining my way of life, refining my brush work, slowly going ever deeper into the Dao of brush-and-ink.”

Shen’s works on paper are so voluminous that you will be mesmerized by their profundity and can only guess at the depth of his feelings and the wellsprings of his inspiration.