25 September 2021 Arsani auction made sale of Natalia Byrdina artwork “Rebuilding subjectivity or subjective rebuilding”. There was a strong interest concerning this artwork from visitors and the auction bid became a great matter to tell the audience about the artist. It is provided by the scientist Mykola Zinchenko who is an art dealer and Arsani auction house CEO.

So what makes this art astonishing? What is the source of the artist’s inspiration?  In which direction this art moves? What innovations and differences she brings to the unexplainable world of pictorial and decorative-applied arts?  We will try to find the answers to these and other questions in this article to get familiar with the artist’s personality and her craftsmanship.

The artist’s studio is a bright space with different styles and techniques, artworks hanging on the walls, lots of materials that are hard to discover at first sight.

When I appeared on the second floor of the studio my attention was attracted by magnificent artwork. It was an image of a tender and dignified lady with a confident look. When I got closer to exploring the artwork I wondered with my feelings and found that the artwork is filled with additional visual and kinesthetic 3d-effect drips due to epoxy resin technique.  I fell in love with an esthetic satisfaction caused by the artwork and afterwards it appeared in my collection.

“Business lady” – the artwork title. It is quality made and brings the beauty of image. It brings the idea that the artist wants to share with us. There is a lady in the middle of artwork’s subject, now she is in her realization trying to find herself in modern conditions of social circumstances. She takes all responsibility and earns by herself all funds to cover expenses on her and her family. She is tender, beautiful and graceful and with all this underlines the properties of a strong gender. How not to lose herself doing business with all competitiveness proving that she can and does earn money, while she wants to be a woman. Sometimes she wants to be weak and tender, to feel the defence and safety from a strong gender but has to ensure all this by herself. This duality, confrontation and at the same time combination of masculine and feminine are reflected in “Business lady” artwork. All these are sufferings of the creator and mostly underlined by the dripping volume technique on the painting. Red drips are the awareness tears, the black ones’ – are the tears of adoption and confrontation.

So now let’s apply to  “Rebuilding subjectivity or subjective rebuilding”. Concerning all written we come to the conclusion that not only visual appearance but also semantic context plays a significant role in the artwork perception. This filling perceived by an extemporaneous spectator just by his senses and may be interpreted as sympathy. Sometimes misunderstanding or an absence of wish to spend some time near the artwork get to precocious conclusions and the artwork importance being leveled out.

“Rebuilding subjectivity” by Natalia Byrdina is an attempt to rethink herself as a woman, ukrainian citizen, defenceless human agent consisting of a wide variety of questions and a dim relations with her objects.

Colossal attention to details and elaboration of senses, using non-standard techniques are the artistic language of personal experience transformation and her interaction with materials while the artworks are being created.

The art of Natalia Byrdina – is the continuing research process that finds itself in the transformation of artist’s interests and style. She strives to cover different aspects of social problematics: influence of patriarchal society stereotypes, feminism problematics, post-colonial thinking research as an attempt to realize the influence of “the other” on human relations, man, with her internal objects and imaginations. She also investigates posthumanism as another look on the place of personality in the system of non-human agents interaction and the attempt to implement the natural wasteless existence in her artworks. These artworks are filled with knitted elements that have a role of a secondary skin that is thrown away and is no longer to be used.

Now Natalia prepares her new series “Entrails” for the exhibition in London. This series shows an attempt to implement an idea of human prosthetics, its imperfection and a necessity to wear clothes to stay alive. This is the one of the reasons we may often spectate textile, knitted elements and threads in her artworks.

At this moment of article release the “Entrails” series is the maximum realization of the artistic findings. She plans to develop it in portraits and surrealistic compositions. In the hand elaboration artist use round and cylindrical foam balls that are tied with knitting needles and a hook.

The finished pieces look very kind, plush and somewhat intimate. Natalia works only with secondary material, buys used threads or knitted products, even threads from the USSR. It is important for an artist to use recyclable materials, and it is important that these are threads that have already lived their lives. They seem to contain their own genes. This is another language spoken by her art. The works are multilevel not only in form, but also in the combination of various artistic languages.

One of them uses a blanket that the artist knitted when she was pregnant with her son, and then, as a baby, he slept under it. Now this blanket is an integral part of the work “Separation pains”. In this artwork the artist expresses those moments of the separation of children from us, their formation, when we let go of them a little bit from ourselves. Symbolism is present everywhere – both in the forms themselves and in the material.

After the exhibition in London  the artworks are going to be presented at one of the prestigious European art fairs. Also the appearance of the original work of the artist Natalia Byrdina is planned at the upcoming sale of the ARSANI Auction in the spring of 2022. 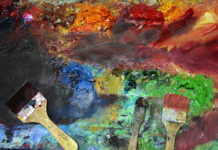