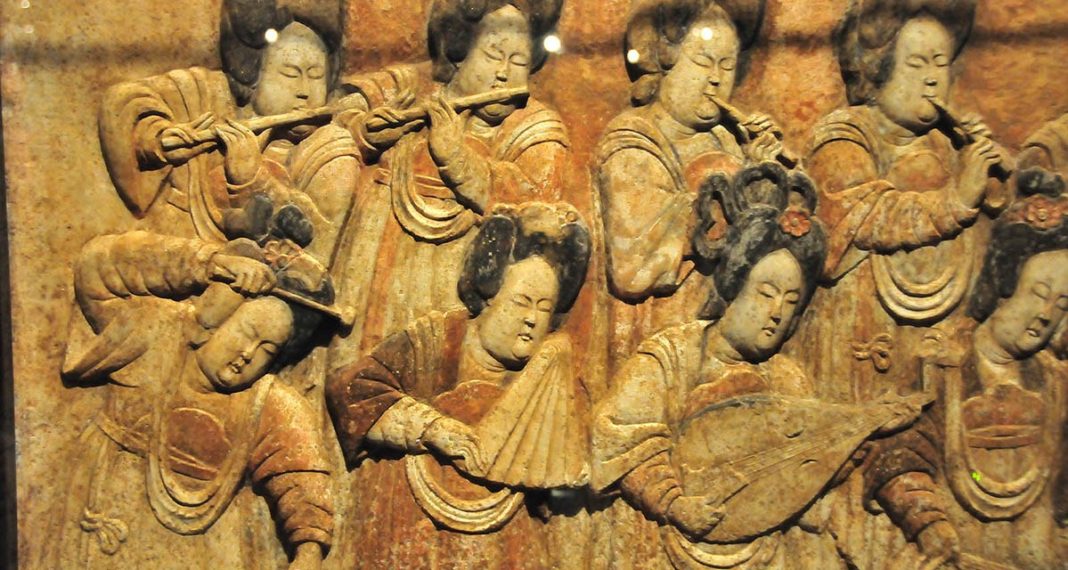 There are a lot of dynasties in China and it can be hard to remember them all. I have used different mnemonic devices over the years, but since I’m a one-time garage rock champion (although we never played anywhere but my garage), music seemed a good choice to keep track of the different eras in Chinese history.

Shrouded in myth, not much on record, but set the basic template for everything that was to come later — even if those original influences aren’t always apparent at first flush. The end is also something of a mystery.

RoJo signed a deal with the devil and died from drinking whiskey poisoned by a jealous husband. According to legend, the last ruler of the Xia, King Jie, also had a notorious love life, becoming overly infatuated with one of his concubines, the notorious Mo Xi.

Jie and his paramour liked their tipple so much, in fact, they built a lake of alcohol and when they got bored of swimming around naked and drunk, Jie ordered 3,000 of his soldiers to drink the lake dry. Spoiler alert: The soldiers drank as much as they could and then all 3,000 of them fell into the lake dead drunk and drowned. As Robert sang, “I’m a poor drunken-hearted man, my life seems so misery.” Jie’s troops would no doubt relate.

Faith is cold as ice
Why are little ones born only to suffer
For the want of immunity
Or a bowl of rice?
Well, who would hold a price
On the heads of the innocent children
If there’s some immortal power
To control the dice?

Seriously, if we were to play the drinking game: “Oracle bones inscription or Neil Peart lyric,” would Victor Mair and Kaiser Kuo be the only people alive able to tell the difference? Could Neil Peart even?

Everybody claims them as their big influence, nobody sounds like them. Generations of Confucians and Confucian wannabes from the Grand Master Kong himself down to Daniel Bell have talked about getting back to the golden age of the Zhou. Nobody ever does it, or at least nobody ever does it well. But in that failure, they often end up innovating accidentally. Failing to sound like the Beatles is what gave us Elton John, Elvis Costello, ABBA, and, of course, the immortal Bad Finger.

Shocked the world, didn’t stick around to finish what they started. As you know, one was fronted by a megalomaniacal, self-absorbed, psychotic narcissist obsessed with his place in history whose blatant disregard for others doomed the whole enterprise to failure. The other, of course, was led by Qin Shihuang.

Johnny Rotten, Steve Jones, and their band paved the way, but the Clash cashed in. Nobody really listens to the Sex Pistols anymore, but London Calling, even 38 years later, still sounds oddly relevant.

It seems strange: the Han Empire was so long ago that looking closely at it ought to reveal a civilization far removed from our own age, altogether alien and irrelevant to present-day concerns. And yet… a soon-to-be overextended empire, freakishly paranoid about foreign influences, unsure about its ruling ideology, beset by palace intrigue, and forever arguing about the role of the state in controlling the economy seems awkwardly du jour.

I think because their peak was so short and they so quickly imploded, it’s easy to dismiss how shockingly important they were at the time. The demise of the Han Empire in 220 CE led to nearly 300 years of divided kingdoms and conquest dynasties with no real end in sight. The 1980s pop-metal scene didn’t last 300 years, but after watching Poison and Diamond David Lee Roth on endless loop on MTV during my formative years it might as well have. In the end, both GnR and the Sui cleared the playing field for better things to come but they were just a little too volatile, too given to excess, and too violent to be a part of what came next.

Does anyone even care that Keith Richards is approximately 149 years old and cannot be killed with conventional weapons? It’s entirely possible that when aliens descend and exterminate humanity with their hyper-advanced death rays they will still find it necessary to take the mother ship back into orbit to nuke Keith from space just to make sure he’s really dead. The Rolling Stones released their first single in 1962, and they’re apparently recording an album right now. That’s 55 years and they are still sorta/kinda relevant thanks to their overexposure on every heist film/gangster movie trailer ever made.

This would be like the kids in 1965 smoking weed and getting seriously down with Scott Joplin, or one of the ’80s/’90s-era Scorsese films (back when Marty still had his crossover and an extra gear) getting scored by Stephen Foster. What does this have to do with the Tang Dynasty? Nothing really, but it’s worth mentioning. Besides, there already was a band called Tang Dynasty. That would have been too easy.

Okay, I’m being lazy. Both were founded by a pair of brothers. (I guess I could have also gone with Oasis or the Black Crowes, but Oasis always had more of a “Warring States” vibe about them, and nobody really likes the Black Crowes.)

Like the ABB, the Song Dynasty had a harder edge and more substance than people give them credit for, although the Song rulers could go off into flights of poetic and philosophical fancy while losing half their kingdom, just as the Allmans would occasionally — and for reasons passing all understanding — launch mid-song into a 23-minute freeform jazz improvisation, thus losing half their audience.

Look and listen closely, and they were both clearly doing something new and funky which appealed to a wide variety of intellectual and artistic traditions. Also, some of their spin-offs (See: “Allman and Woman”) had a nasty misogynist streak that would no doubt have appealed to the Song-era Neo-Confucians (“Better for a widow to starve than to remarry”).

It turns out a nation of millions could not, in fact, hold them back.

Lasted a long time despite never really being as good as everybody thought they were. Certainly had some peaks (“Van Halen I”/Zhu Yuanzhang terrorizing the bureaucracy; “1984”/Yongle re-building Beijing and sending Zheng He out to terrorize the Indian Ocean coastal states), but it all soon devolved into a long goodbye of disposable frontmen, self-medication, and nepotism. I could also make a Michael Anthony/eunuch joke here but I’m sure you can make your own, and I wouldn’t want to deprive you of that right.

When it worked, it worked. It’s a tough field, but at their best CSN&Y could hang with just about any band on the planet. (Listen to the 4 Way Street album or check out this video in which, at the 46-second mark, Stephen Stills almost has a stroke trying to out-sing Tom Jones.)

But drugs, man… it’s always the drugs that bring you down. And women problems. (It would be easier perhaps to list the band members Joni Mitchell didn’t sleep with. Also, I occasionally have dreams where I’m at a concert and it’s the Empress Dowager Cixi, in full regalia, singing the Court and Spark album in its entirety while Li Lianying plays fretless bass. Do. Not. Let. This. Happen. To. You.)

Or maybe it’s that when it does work, they’re so good that you wind up forgetting 3/4 of them grew up in a foreign land…

It took a few more years and more than a few lineup shuffles before they got it right, the peak didn’t last as long as it seemed like it should have, and they are better regarded now than contemporary evaluations would suggest. You also have parallel power couples consisting of a truculent perfectionist with delusions of grandeur and a witchy enchantress who, in both cases, turned out to be the smarter of the two, and who may or may not have been sleeping with one of the roadies the whole time.

Started out as a vehicle for an increasingly unstable leader, only to be written off prematurely when said leader imploded into a drug-addled haze of paranoid narcissism. Mao, like Syd Barrett, may have been a mad genius, but sometimes it takes a mercurial persnickety pragmatist to really make the diamond shine.

The problem is: how many times can a band/party reinvent itself before they run out of talent in the back? Like post-Roger Waters Pink Floyd, the CCP in recent decades has bloated into corporate rock. Looks good, sounds good, but never confident enough in the new material that they could fully jettison the past, and thus wind up playing souped-up versions of their greatest hits to stadium crowds hoping that a light show will distract the punters into thinking they are watching something big and bold.

On a somewhat related note, should we keep using the word “dynasty” at all? Dynasty would seem to imply one family taking over the top of a relatively stable system. I wonder if this suggests a continuity that is a bit at odds with the historical reality of Chinese history. While the different states/dynasties/empires certainly shared many institutional and ideological structures, they were also quite different from each other. One wonders if there is another term which best reflects this glorious complexity and diversity…