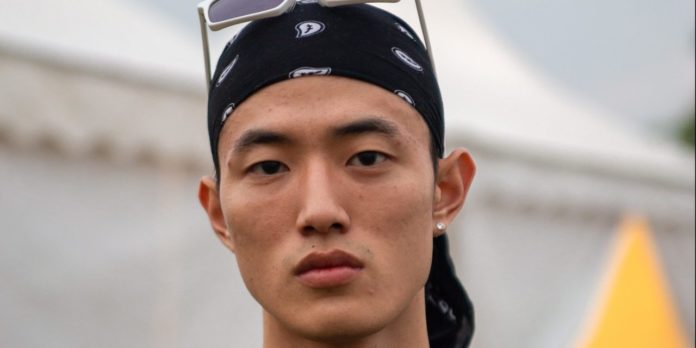 Jeremy Quest is — or, was — one half of Shanghai-based alt-rap duo VROSKIII. Jeremy, whose parents are both Korean, was born in Shanghai. Eventually he moved to the States, attending middle school in Baltimore. These days, he’s been bouncing back and forth between Korea and Shanghai, putting out music, performing, and expanding his signature style of worldly flows over spacey, new school beats. Now, having earned a name for himself in China as part of VROSKIII, Jeremy has his eyes set on a solo debut.

We caught up with Jeremy at the recent Concrete & Grass Music Festival to talk about rapping in multiple languages, China’s rapidly changing music landscape, and making art across borders as he pursues his solo future.

RADII: Hey, thanks for sitting down with us.

Jeremy Quest: For sure. Hey, where are you from?

Nice. I grew up some in Maryland, was in Baltimore for three years in middle school.

Well, I was born here in Shanghai. But I’m Korean. I have Korean citizenship. I just moved back to Korea like three years ago after I got a record deal with New Wave, which is the label of my boss B-Free. He’s part of Cohort with Keith Ape, if you’ve heard of that.

Now I’m living between Korea and Shanghai, going back and forth a lot. I grew up here, but I’m Korean — I can speak Korean and my parents speak Korean, so that’s why I’m doing both things. I came back to Shanghai for high school, and then for college, but I dropped out. I’ve been in Korea since then, moving around, Shanghai to Seoul.

Where do you want to achieve more of your success going forward, Korea or China?

Probably Korea, since I have a Korean passport. And when I rap I only speak Korean and English, I’m not really fluent in Chinese. Like I can speak Chinese with my friends, but when I rap — you know Edison Chen? People told me I sounded like Edison Chen, so I was like, “oh shit, I’ll stop.”

I have one song in Chinese. It’s called Summertime, with that guy over there Mirai Senshi. Yo Mirai, say what’s up!

Mirai Senshi, over there: Yo what’s up!

Mirai Senshi, still over there: Yo, what’s up.

You know Skibs, the guy who made Hong Kong Kids? For foreigners out here in China, man I remember listening to that song. He sounded like Mac Miller on that.

Man, RIP. We were all sad X passed, and Lil Peep, but Mac was someone who we’d watched grow for years now. It felt really personal.

Heck, he’s all over my feed man. Didn’t expect him to just go like that, you know?

You’re a native Korean speaker, and essentially a native English speaker. How do you decide when to rap in Korean or English? Is it like, hooks in Korean, verses in English, vice versa…something like that?

Well Korean is really good for rapping. Korea is really famous for having a lot of rappers, and I think the language flows nicely. It’s more like English, you know? With an alphabet and everything. But there are still a lot of rappers out in Korea who use English because it sounds more natural — the whole hip hop sound started out with English, so there’s a lot of people still using it. For me, I use English mainly for hooks, slang, plays on words… it just flows better, and Korean feels natural for verses.

In your own experience, what are some differences between the music industries in Korea, China, and the states?

I feel the states and China are more similar. Korea’s such a small place, everyone knows each other once you’re in the scene. But here you have a lot more to explore, you have a lot more things you can do with your music, because there are more people listening to it. In Korea the population of hip hop listeners is so small, most people don’t try new things, so I feel like that’s a big difference. In terms of the market itself, China’s is definitely the biggest right now.

How do fans in Korea versus fans in China respond to your music?

I mean, Chinese people don’t really understand my lyrics. But still, a lot of them nowadays are in touch with the Korean hip hop influence. Like Show Me the Money, for example. Show Me the Money laid the blueprint for the show Rap of China. So it’s all about influencing each other.

Dialing it backwards in time now, when did you start making music?

High school, high school. Just freestyling you know, school kids just fooling around after school in the basement, garage type shit. I started out like that, and then I went into party promotion, and I was MCing there with zero people in the club, you know. It was fun, but now I feel more pressure because I got two companies in my bag. I gotta fulfill their needs and I got to go back and forth and do things for them. But here I feel like not that many people know me. I’m trying to build up my own fans out here, so that’s why I made VROSKIII with my homie Charity. He can’t be here today.

When did you meet Charity, and when did you guys make VROSKIII? How’d that happen?

It was like 2015 when we first met. I was with Okasian, this rapper from Korea who’s popping right now, part of YG entertainment. We had a show together at Arkham and Charity came through. That was the first time we met, but we didn’t really talk or anything like that. But later I was talking with a friend, about how I can’t really make music in isolation, you know? I need to interact with people. So I asked him to introduce me to some people, and that’s how I got reintroduced to Charity in 2016. We formed VROSKIII shortly after that.

Jeremy Quest with DJ TOY at Concrete & Grass in Shanghai

Tell me about some of your early musical influences.

A Tribe Called Quest. My mom was the first one to show me their music. That was when I was in like fifth grade or something. So that’s how I got into hip hop. And Fresh Prince, Will Smith. He’s the shit. The GOAT.

He’s amazing. He does not get the credit he deserves.

Jazzy Jeff and the Fresh Prince, “Summertime”. That was the jam for me back in the day. Then I got into Mac Miller, A$AP Rocky, etc. Rocky’s first mixtape was one of my favorite mixtapes of all time. Peso, Get Lit, Houston….

And what about now? Do you have different influences now that you guys as VROSKIII are taking on a different stylistic direction?

Lil Peep has been a major influence lately when we make songs. Also Xavier Wolf…a lot of Memphis sounds. A lot of people don’t listen to Memphis nowadays. And Suicide Boys, of course.

You have a really distinct aesthetic. The visual style of your music videos, the fashion, the art…what’s the relationship between the music you make and its visual presence?

I just go with the flow with everything. I trust my senses more than others, and I feel like fashion and music go together no matter what. And the visuals of course. So when I look for an artist to collaborate with — like a music video director, for example — I look at his personality and his point of view in general. How he sees the world. I ask people what do you think about my song, and they tell me, and I decide from there which ones I can vibe with. It’s all about the vibe. You have to catch the vibe with the person.

Your style is a lot different from most rappers in China. Like if you watch Rap of China, you’re not going to see shit like yours on there. It’s a lot more in touch with what’s happening in the States or in Korea. China is still discovering its scene, and especially now that people are starting to learn about what hip hop is in the context of Rap of China, music like yours becomes even further left of center. What draws you to that style, and what’s it like doing something so different here in China?

I make like 2-3 demos a day, so I forget a bunch of my lyrics. That’s the reason I haven’t released any solo projects — I have really high standards for myself.

Sure. If you’re making X songs per week, how do you decide which are the X songs for an album? Perfection is the enemy of progress. And on that note, can you tell us about your next release?

I’m releasing an album October 17th that’ll really show what kind of music I make. A lot of it is samples — I like old sounds, and creating the new from that. Bringing back old trends and making something new. So I’m just trying to go through that process with my own ideas.

Listen to Jeremy Quest’s new album Before the Que$t here.