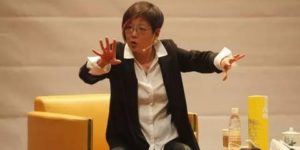 Xinxin was a leading pioneer in China’s writing circle in the 1980s. She wrote in all genres: from non-fiction to fiction, and from crime novels to sci-fis. Many of Xinxin’s works led new writing trends in China and inspired a decade of writers. Her non-fiction work, the widely translated Chinese Lives: An Oral History of Contemporary China（《北京人：一百个中国人的自述》）, opened a new era for non-fiction writing in the country. Her crime fiction Postcards and Bandits（《封·片·联》）, was among the most borrowed Chinese contemporary novels in France’s libraries.

At the peak of her writing career, Xinxin decided to set herself on exile and leave all glory behind. Following the literary climate change in China, she chose to live and wander in foreign countries, simply because her “individual existence was threatened” and she refused to be “institutionalized”.

Zhang Xinxin will be talking at Guanghwa about her adventurous journeys in past decades. She will be joined by Helen Wang who translated many of her works. Don’t miss the opportunity and register now!

Zhang Xinxin （张辛欣）was born in 1953 and grew up wandering the alleys in Beijing’s walled Old City. As a 12-year-old at the outbreak of the Chinese Cultural Revolution, she was recruited by the Red Guards. At 15, she was sent to China’s Great Northern Wilderness with millions of other children to toil on collective farms. She was a soldier at 17; after falling seriously ill, she became a nurse at 19. When the Cultural Revolution ended in 1979 and university entrance examinations resumed, she was admitted to the Beijing Central Academy of Drama, where she studied to become a director. After a novel published while she was a student drew heavy criticism from the state and left her unemployable, she wrote the acclaimed oral history Chinese Lives, which has been translated into more than 10 languages. She later hosted a television series and worked as a theater director for the Beijing People’s Art Theater. After the 1989 Tiananmen Square protests left her stranded in the United States, she worked for a digital publishing network, wrote screenplays for Chinese television, and worked as a commentator for the VOA. She has self-published a graphic novel and directed several TV series, and continues to write in the Chinese language.

Helen Wang is a London-based contributor to Paper Republic, and tweets, along with Nicky Harman, as China Fiction Book Club @cfbcuk. Helen’s most recent translations are the children’s novels Bronze and Sunflower by Cao Wenxuan (2015) for which she won the 2017 Marsh Award for Children’s Literature in Translation, and The Ventriloquist’s Daughter by LinMan-Chiu. She has translated a number of novellas and short stories by Zhang Xinxin, including Dragonworldand Mad about Orchids.