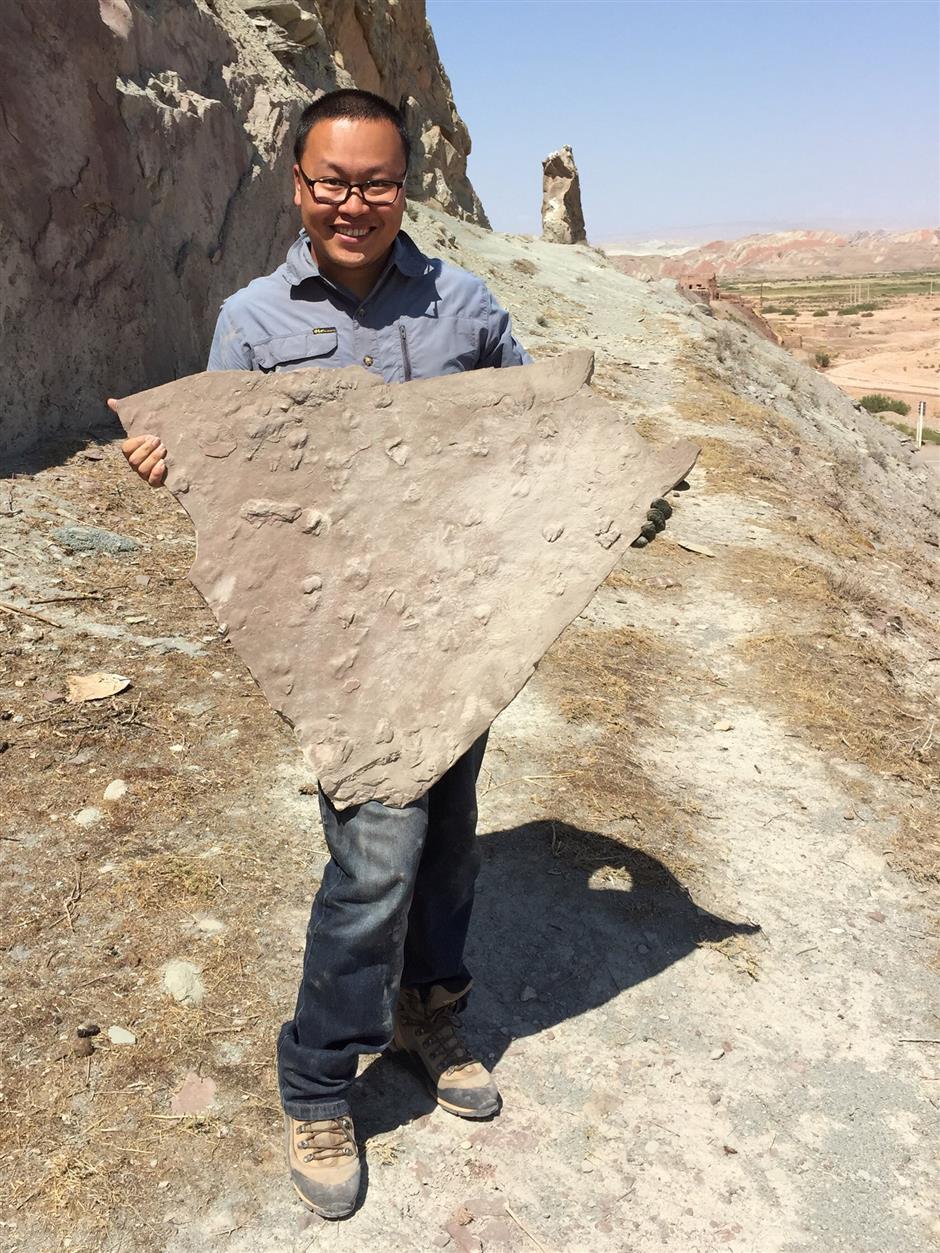 As a little boy, Xing Lida was obsessed by dinosaurs. He never grew out of it. He has become a hunter of prehistoric life.

The 36-year-old associate professor at the China University of Geosciences in Beijing has chalked up many distinctions as a paleontologist. He’s the first Chinese to eat a slice of 4,000-year-old mammoth meat and drink fossil soup. He is the first to discover the feathered dinosaur tail, lizards, a primitive bird’s wing and ancient frog and mollusks, all perfectly preserved in amber specimens.

“This was just like a jackpot,” said Xing. “They are the first dinosaurs ever found in amber and the most important find in my career to date.”

Somewhat of a star in the field of paleontology, he is called “Lucky Hands” by his 2 million fans on the Internet.

“If you do one thing to the extreme, good luck will follow eventually,” he said. “But failures, doubts, misunderstandings and sarcasm always precede the luck.”

Over the years, Xing has climbed mountains, trekked through rain forests, descended into the deep mines and explored no-man’s lands in northwestern China, Iraq, Iran and Southeast Asia, hunting for traces of prehistoric life locked in fossils and amber.

His dinosaur obsession started at age 6 with a Japanese TV cartoon featuring dinosaurs in his hometown in a remote region of Chaoshan in southern China, where his parents were both doctors. From that day, he started buying every book he could find on dinosaurs.

“Every boy is crazy about dinosaurs, but my obsession lasted longer,” he said. “As much as one loves a girlfriend, I love the dinosaur.”

As a teenager, he taught himself how to use computers and built a database of some 900 dinosaur names with Chinese translations. He set up China’s first dinosaur-themed website in the early days of the Internet, typing his whole book collection, word for word, onto the website, totaling more than a million words.

As a university undergraduate in 2007, Xing published his first scientific paper, describing Cretaceous dinosaur fauna that had left tracks in ancient mud in Sichuan Province.

He collected questions from the web and wrote letters to experts at the Institute of Vertebrate Paleontology and Paleoanthropology of the Chinese Academy of Sciences seeking answers.

After graduation, he tried his hand briefly at science reporting and managing a prehistoric theme park. But within a year, he quickly returned to his true love, studying paleontology at the University of Alberta in Canada. He earned a Ph.D. at the China University of Geosciences.

A discussion with an entomologist who showed him a piece of Burmese amber from the Cretaceous period with “a dinosaur’s leg” was a turning point, though the specimen turned out to be a lizard.

“I saw the possibilities,” he recalled. “Amber could store abundant information about dinosaurs and other prehistoric vertebrates.”

Amber is a favorite of paleontologists because it insulates fossils from chemical degradation by the environment and helps to preserve them in three dimensions.

Xing set off for Myanmar, where he braved military conflicts and political unrest to explore rich amber resources. Amid many illegal amber mines, he ventured deep into the earth, risking his life. He was the only Chinese scientist to date who had worked there.

He also scoured local jewelry markets, looking for amber specimens. In 2015, a jewelry trader in Myanmar showed him an egg-sized piece of amber that contained what looked like plant material.

Upon closer inspection in sunlight, Xing had to restrain his astonishment. He realized there were feathers on one side of the little filaments running through the amber.

“It was definitely not plant amber,” Xing said. “I thought it could be dinosaur or ancient bird amber ­— with probability on the former.”

After some bargaining, he bought the amber from the seller and took the first flight back to China. With a Micro CT and further study, Xing determined that the material in the amber was feathers and the partial tail of a tiny, baby dinosaur that lived some 99 million years ago. 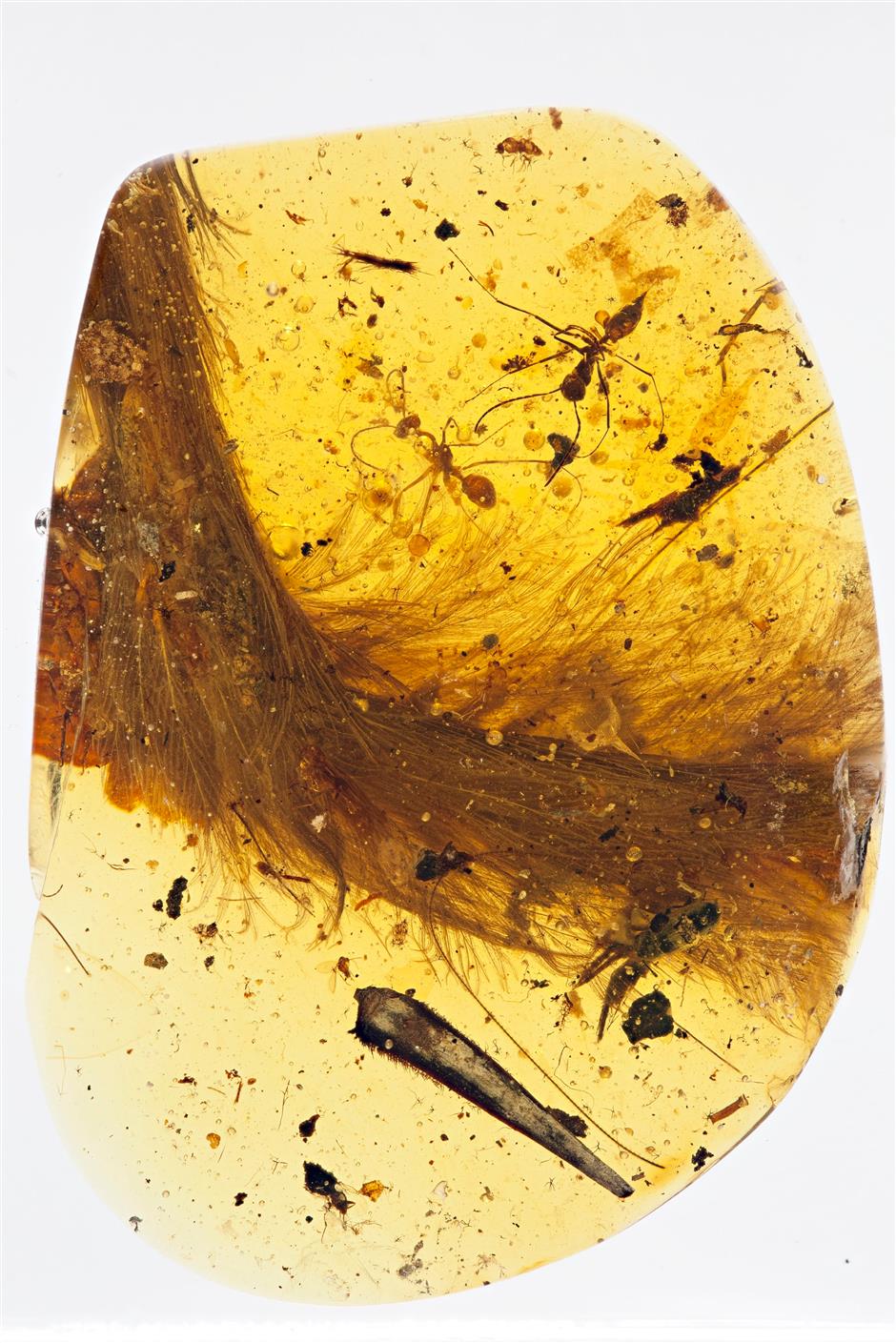 Amber that Xing discovered perfectly preserves the partial tail of a tiny, baby dinosaur that lived some 99 million years ago.

The find opened a rare window into the structure and organization of dinosaur feathers that could help shed new light on their evolution.

In addition, Xing also detected a content of 80 percent diatomic iron from the amber, indicating the blood of the dinosaur.

Xing didn’t stop after this astonishing find. He later discovered the first primitive bird wing, an ancient frog, a snake and a complete baby bird with details of the head, eyelids, claws, feathers and cornea ­— all preserved perfectly in amber specimens. He also found crustaceans from the Cretaceous period in amber.

“It was just like a seafood feast,” he said, joking.

He went on to collect more than 200 amber pieces and dozens of dinosaur egg fossils.

“What I want to find in future is the amber of prehistoric mammals,” he said.

In 2011, Xing triggered social controversy with a live broadcast on the Internet of him eating mammoth meat. It was from a leg preserved in Siberian permafrost for about 4,000 years. Xing cooked it thoroughly and flavored with salt, but told his online audience that it still “tasted bad, weird and coarse, like soil.”

Criticism, doubts and adulation flooded his social media account overnight. Some detractors said he was too flashy and cut corners, but experts in the field defended his work as sound and said he is contributing to the fast development of paleontology in China.

Xing remained unflustered throughout. He said he only wanted to promote science among the general public. Well, at least he got the public’s attention.

“I suddenly realized the Internet could be a science classroom,” he said.

Xing explained paleontological science in simple language on the Internet as he continued live broadcasts of on-site dinosaur fossil digs. His appearances changed the stereotype of a paleontologist and made esoteric science fun and interesting.

In addition to helping authenticate some fossils in the cyber space, Xing also answers questions posed by online users, even though some are shallow and common.

Will the dinosaurs ever come to life again? No, said Xing.

“There is no possible channel with current technology,” he explained. “A DNA sample can be stored for 5 million years, but amber is at more than 100 million years old, so we cannot revive dinosaurs today.” 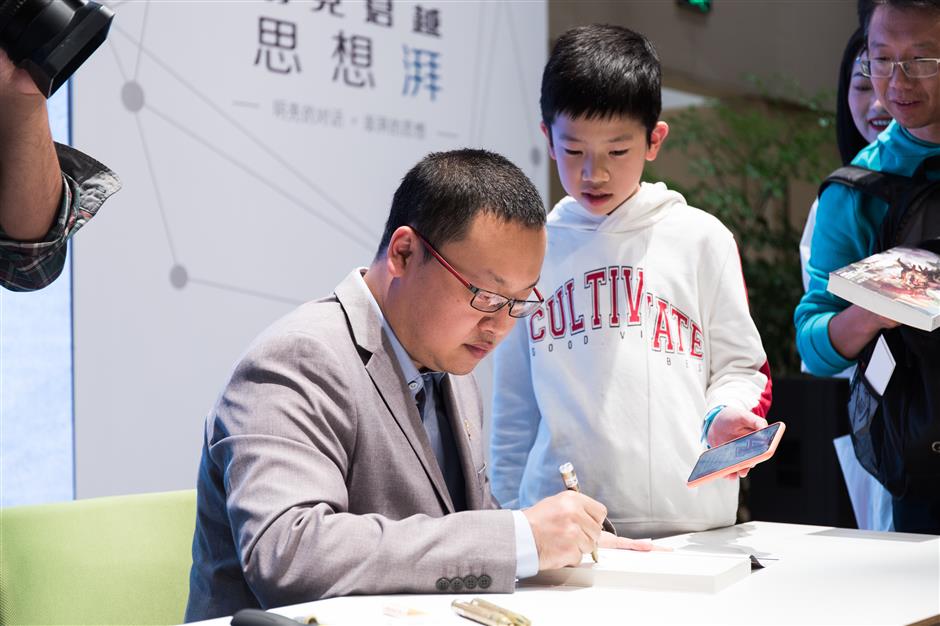 Xing autographs his latest book about dinosaurs for his young fans.