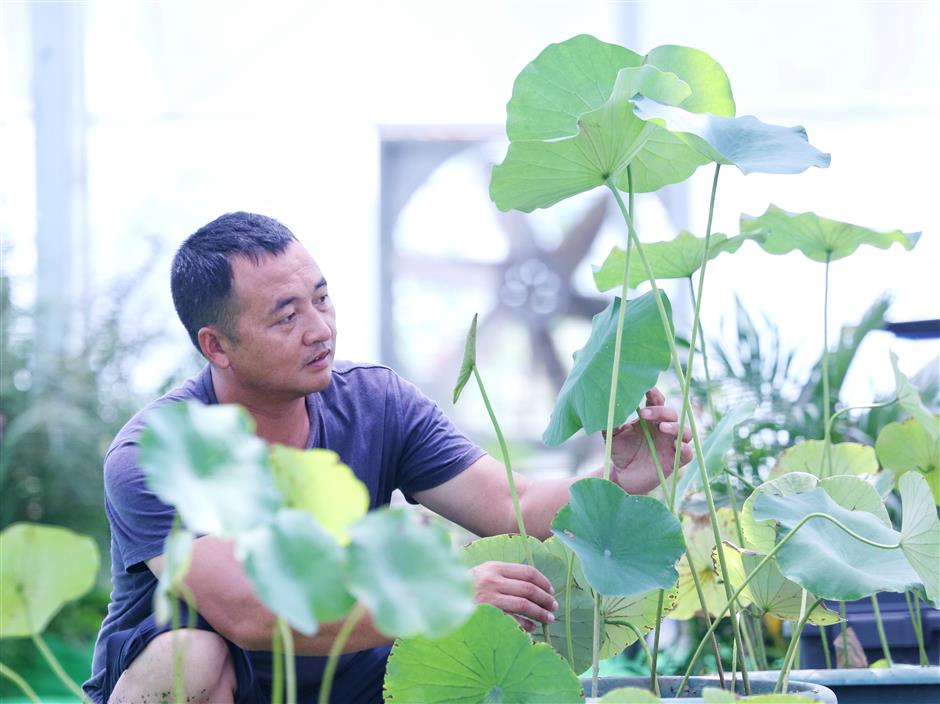 Waves of jade green lotus leaves rest on the water and beautiful flowers emerge from beneath the gleaming surface. Wild birds hover over the water at dusk while sparrows swoop and chirp in the twilight. And on the nearby country road, flocks of quacking ducks waddle among chickens.

Just an hour’s drive from the city center is Xinbang Lotus Garden, an idyllic pond sitting quietly in Songjiang District in southwest Shanghai, an oasis of calm away from the busy city life.

Tian Lizhi, however, is too busy to enjoy the countryside tranquility. Tanned and sweaty, the lotus grower, 45, makes dozens of patrols to check lotus growth, and shuttles back and forth between the pond, the greenhouse and his office.

“Summer is the busiest season for me,” he says with a big smile. “But looking on the bright side, I only need to work half of a year. Isn’t it great?”

Influenced by his uncle, a lotus expert working in the United States, Tian developed a great passion for the plant, and gradually learnt agricultural expertise from theory to practice.

In 2015, Tian was invited to develop new breeds for the annual Songjiang Lotus Festival in Xinbang Town. Laid out like a giant lotus leaf, the town has earned its reputation as “the home of the lotus” for more than 1,500 years.

“When I first came here, there was only one breed,” Tian says.

Over the past four years, he has introduced and developed more than 800 new breeds and more than 150 water lilies, making the town the biggest lotus-breeding center in east China, with a water area of more than 4 square kilometers.

From the most common Zilian breed that bears seeds to the precious Zhizun Qianban, which can have more than 1,200 petals on one single flower, and Hongchun shaped like a red lip in full blossom, Tian has cultivated a lotus kingdom in Songjiang. 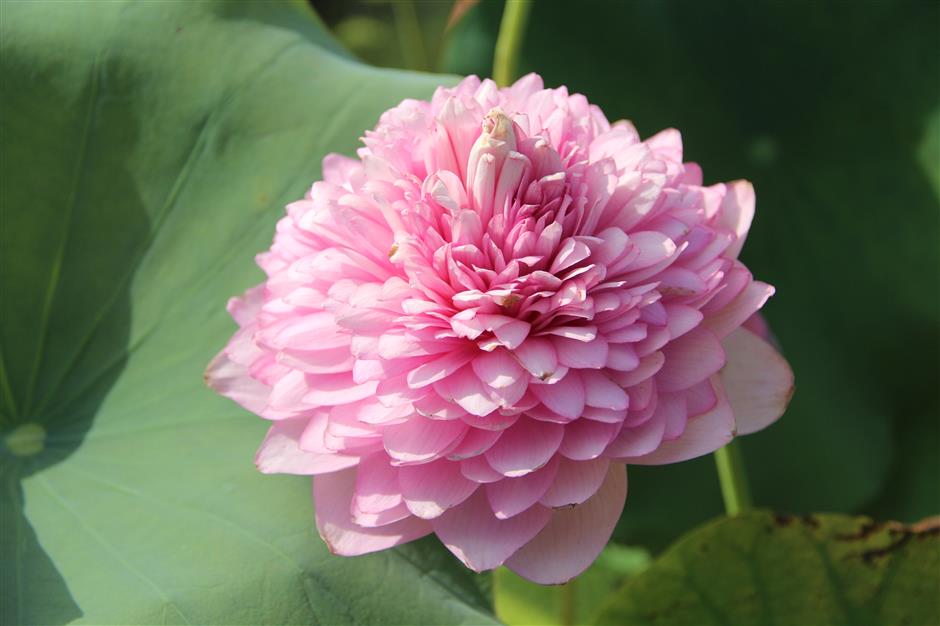 A lotus blooms in the early morning and slowly closes its petals in the afternoon as the sun reaches its zenith.

A new bud appears after the old one has bloomed for about 10 days and then withers. The blossom period can last at least two months.

If grown properly, lotuses can flower from the end of May till mid-September. Water lilies can bloom even longer, from April to end of the year.

A lotus is usually judged by its color, shape of the flowers, leaves and the blossom duration — the longer the better, which is what the grower is striving for over the years.

Shuangran Honglou is Tian’s latest achievement, a flaming red lotus that can bloom till November. It’s been registered officially as a new nelumbo breed in the International Water Lily and Water Gardening Society. The breed is a hybrid of a lotus from tropical Thailand and a local Chinese one.

“It’s like a child, whose genes are decided by the parents — one for the blossom period and the other for the appearance,” Tian says.

It is a long, strict process to be approved as a new breed, which requires three to five years of observation to ensure a stable shape and properties before being sent to the Society for another one year’s monitoring.

Tian fosters a variety of new breeds every year, but only three or four of them can qualify.

“Most were abandoned halfway because they did not look good,” he says. 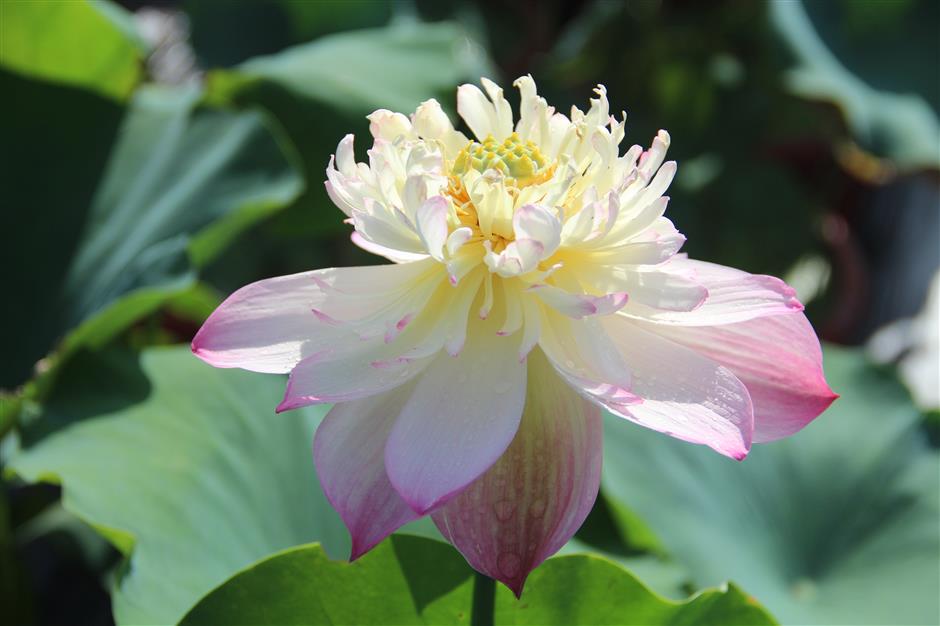 A loving heart and great patience might be the best nutrition for lotus. The flowers are just like his children. He is the nanny and doctor; he feeds and treats them.

“But they are good kids, not that finicky,” Tian jokes.

To grow lotuses sounds easy — water, mud, ventilation and five-hour sun exposure every day might do. In addition, they aren’t affected by rains or storms.

“Just remember lotuses can’t bloom if they always stay in the shade,” he says.

Each part of a lotus is treasured. Petals can be boiled to make tea; leaves are a traditional Chinese medicine believed to dispel inner heat; lotus seeds are a household summer snack; and its root can be cooked for fine dining and ground for starch.

Wine, cosmetics and body care with lotus ingredients are also being developed.

With the exchanges with experts from Chenshan Botanical Garden, Tian’s lotus horizon is broadened once again.

“I come in touch with new planting techniques of anion, genetic modification and radiation, which I never heard of before,” he says.

Tian has planted lotus in the Qingxi Countryside Park in Qingpu District, Wuzhen watertown in Zhejiang Province, Xinzha Lotus Park in Jiangsu Province and the Old Summer Palace in Beijing. 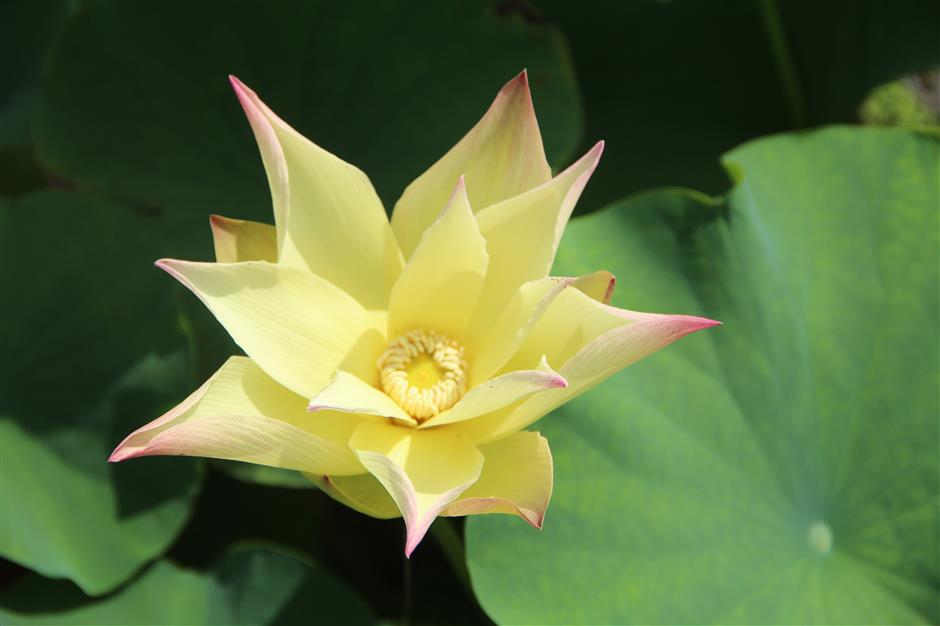 The industry seems promising, but Tian has his concerns for future.

“All of my workers are seasonal and old people, hired from the nearby villages,” he says. “Young people are reluctant to labor in the fields, which might sound not as decent as an office job.”

Tian’s biggest dream is to open a lotus museum in Shanghai to showcase the world’s 2,000 lotus breeds he has collected over the years from all over the world.

“Two thousand ponds — each about 10 square meters — for 2,000 breeds, designed into a giant maze with three entrances and exits,” Tian says.