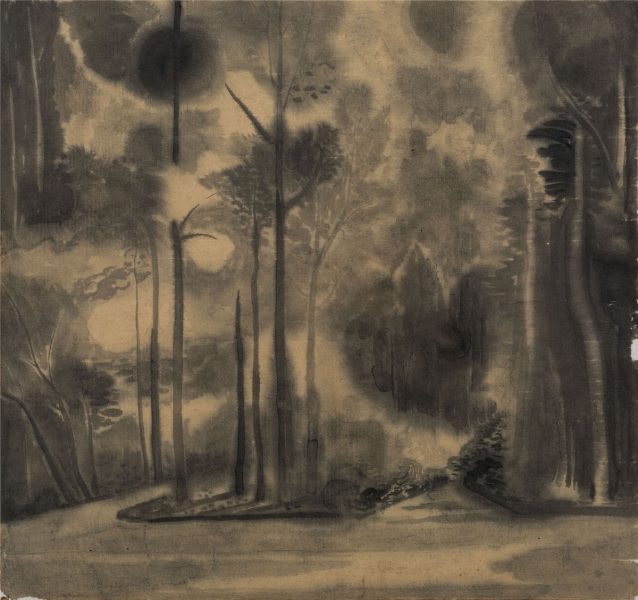 The Chinese artist Liu Zhuoquan has been, up until now, perhaps best known for his ‘inside painted’ snuff bottles, an intricate and painstaking art that dates back to the early 19th century. However, as the work at Jan Murphy Gallery shows, his practice has developed to become a compelling and unusual marriage between tradition and contemporary culture.

Similarly, Li Ning, who Liu Zhuoquan is paired with at Jan Murphy Gallery, is another artist fusing aspects of age-old traditions with his own experimentation. His work combines the recognisable motifs of Chinese ink painting with a mode of abstract expressionism informed by Western artists such as Luc Tuymans and Peter Doig.

The idea for this joint exhibition came about when Murphy herself visited Beijing to meet with Liu Zhuoquan, whom she has known since 2011. “Zhuoquan was keen for me to meet his neighbour in the studio next to him,” explains Murphy. “I was immediately struck by the simplicity and poignancy of Li Ning’s work. I could see a beautiful symbiosis between the work of both artists – both in their palette and in their references to traditional Chinese art making.”

A strong political energy also pulses through the exhibition, particularly in the work of Liu Zhuoquan.

His snuff bottle works reference traditional Chinese Shanshui painting, a landscape style that had its zenith, in his mind at least, during the Wudai and Song dynasties. The artist is mournful about the fact that Shanshui painting became, as he puts it in a statement accompanying the show, “contaminated by political ideology” as he was growing up in the 1970s and 1980s. And his work is an elegy for “the loss of our glorious Chinese history.”

The Jan Murphy Gallery exhibition sees him address these ideas and also incorporate more expansive issues that go beyond just China. “Prior to this body of work, Liu’s art has tended to be quite political,” says Murphy. “However, here we see a direct shift towards both a social and environmental and ecological commentary. Zhuoquan is always pushing the boundaries – both stylistically and in terms of subject matter. He uses this traditional practice to make us look at very contemporary problems.”

The exhibition will feature 16 of Liu Zhuoquan’s large-scale painted bottles and some recent photographic works. “The photos add context to the landscapes within bottles and reference Zhuoquan’s other interest, documentary making,” says Murphy.

This is not the first time Liu has exhibited at the Jan Murphy Gallery and he has also exhibited in Europe and throughout China. On the other hand, this exhibition marks Li Ning’s first ever show in Australia, and he too channels certain anti-establishment sentiments through his approach to ink paintings.

Murphy remarks that Li Ning’s use of abstraction and conceptualism “were met with disapproval by the Chinese art system.”

Indeed, his background is something of a mish-mash of influences and styles: he initially studied oil painting before undertaking a masters degree in mural painting. Eventually, he turned to ink painting with the intention of subverting pre-conceived ideas about the tradition by eschewing the traditional Chinese brush, using the distinctly economic option that is bamboo paper, and embracing Western influences.

Murphy admits that it is impossible to speculate how representative Liu Zhuoquan and Li Ning are of any broader themes in contemporary Chinese art. What is certain though, is that these two artists are at the forefront of exploring how old clashes with new. “Their works speak to their particular interests,” says Murphy, “which are indebted to the ancient traditions of a long existing culture, but that also look outside this to Western art.”