Zhang Xuan was a renowned court painter in the Tang Dynasty (AD 618-907). Born in Xi’an in Shaanxi Province, he was famous for his figure paintings, which mainly portrayed the elite of society.

Figure painting reached its zenith during the prosperous years of the Tang Dynasty.

One of Zhang’s well-known paintings is “Lady Guoguo’s Spring Outing.” Although the original painting disappeared, a copy made in the Song Dynasty (960-1279) is now a national treasure.

Lady Guoguo was the elder sister of Yang Yuhuan (AD 719-56) who was often known as Yang Guifei or Imperial Consort Yang.

Known as one of the Four Beauties of ancient China, Yang was the beloved consort of Emperor Xuanzong of Tang (AD 685-762) during his later years.

In 733, 14-year-old Yang married Li Mao, who was Emperor Xuanzong’s son. However, Li found the girl so desirable that he stealthily arranged for her to become a Taoist nun while bestowing a new wife on his son.

Emperor Xuanzong officially made Yang an imperial consort in AD 745.

The emperor also bestowed honors on Yang’s family members, including Yang’s three older sisters who were conferred to the ranks of Ladies of Hanguo, Guoguo and Qinguo. They were allowed to move-in and move-out of the palace at any time.

The beautiful Lady of Guoguo was so lofty that she only needed light makeup before entering the palace, while the other women tried every means possible to dress up and look beautiful.

Her elegance, beauty and smooth skin was recorded in Du Fu’s “Liren Xing,” literally a trip of beautiful women.

The replica of Zhang’s painting was ordered by Emperor Huizong of the Song Dynasty (960-1279), who is best remembered as a patron of the arts and a painter and calligrapher.

One day, Emperor Huizong asked officials to hunt for Zhang’s authentic paintings, which were rare because 200 years had passed since the Kaiyuan Era (AD 712-741) in the Tang Dynasty.

After a month, good news arrived at the palace. Looking carefully at Zhang’s painting, the emperor was soon captivated by it.

The yellow hand scroll depicts a spring outing of the Tang aristocracy.

The spring trip, which occurred on the third day of the third lunar month, was a Tang Dynasty tradition.

Women, especially those in elite society, often went on an excursion that day.

There are eight horses and nine characters in the painting, which can be divided into three sections. 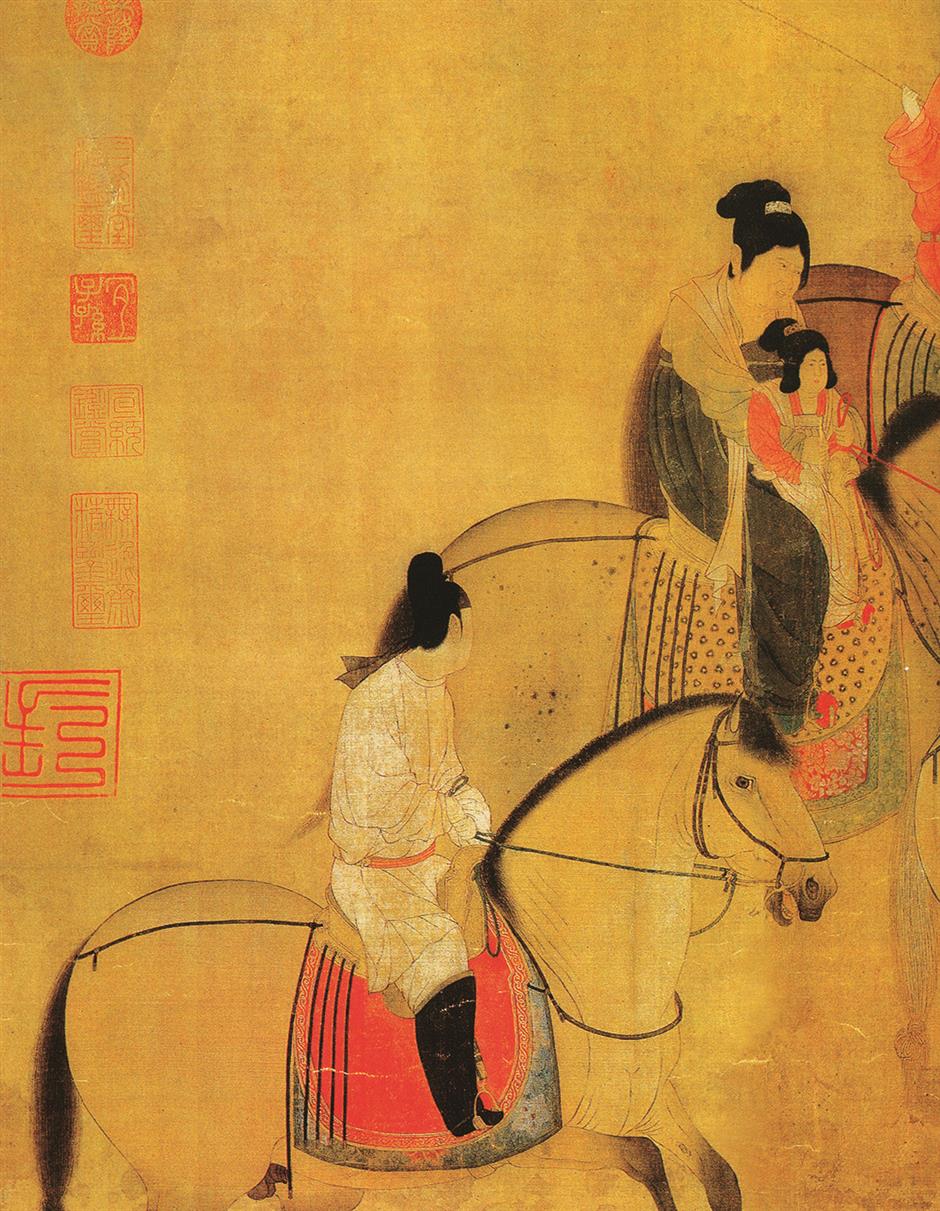 The hand scroll is viewed from the right end of the painting.

A middle-aged person wearing a navy-blue gown is at the front of the line. Many experts believe that the person is a girl dressed in male riding garments. During the open and tolerant era, many women had a rebel spirit.

They did what men would do — climbed or jumped over the walls and went out to go sightseeing so they had to wear male clothing.

The girl is followed by a young woman dressed in a red gown and an attendant riding a black horse. The second section portrays two women.

Their delicate hairstyles and elaborate clothing reveals their noble status. Both of them wear a traditional ruqun, which is made up of a top jacket, a long gown and a skirt.

The opulent and graceful woman looking forward is the Lady of Guoguo. With light makeup, she looks calm and at ease. Another woman who is talking with her is her sister Lady of Hanguo.

In the third section, an elderly nanny holding a little girl rides a horse between a young woman dressed in a red garment and an attendant.

Apart from the painting “Lady Guoguo’s Spring Outing,” Emperor Huizong also collected 46 of Zhang’s authentic works. All of them were carefully copied by the Song imperial painters.

In 1126, the Jurchen-led Jin Dynasty invaded the Song Dynasty during the Jin–Song Wars. A large number of national treasures, including Zhang’s paintings were grabbed by the Jin forces. Treated as spoils of war, the treasures were neglected and laid aside in the palace.

Emperor Huizong was called “Prince of Tianshui Commandery” so the inscription depicts the production period of the replica.

The authentic work of the painting is missing.

The copy is now on display at Liaoning Provincial Museum, after going through the hands of various famous collectors like Jia Sidao of the Southern Song Dynasty (1127-1279), Emperor Qianlong (1711-99) and Puyi (1906-67).