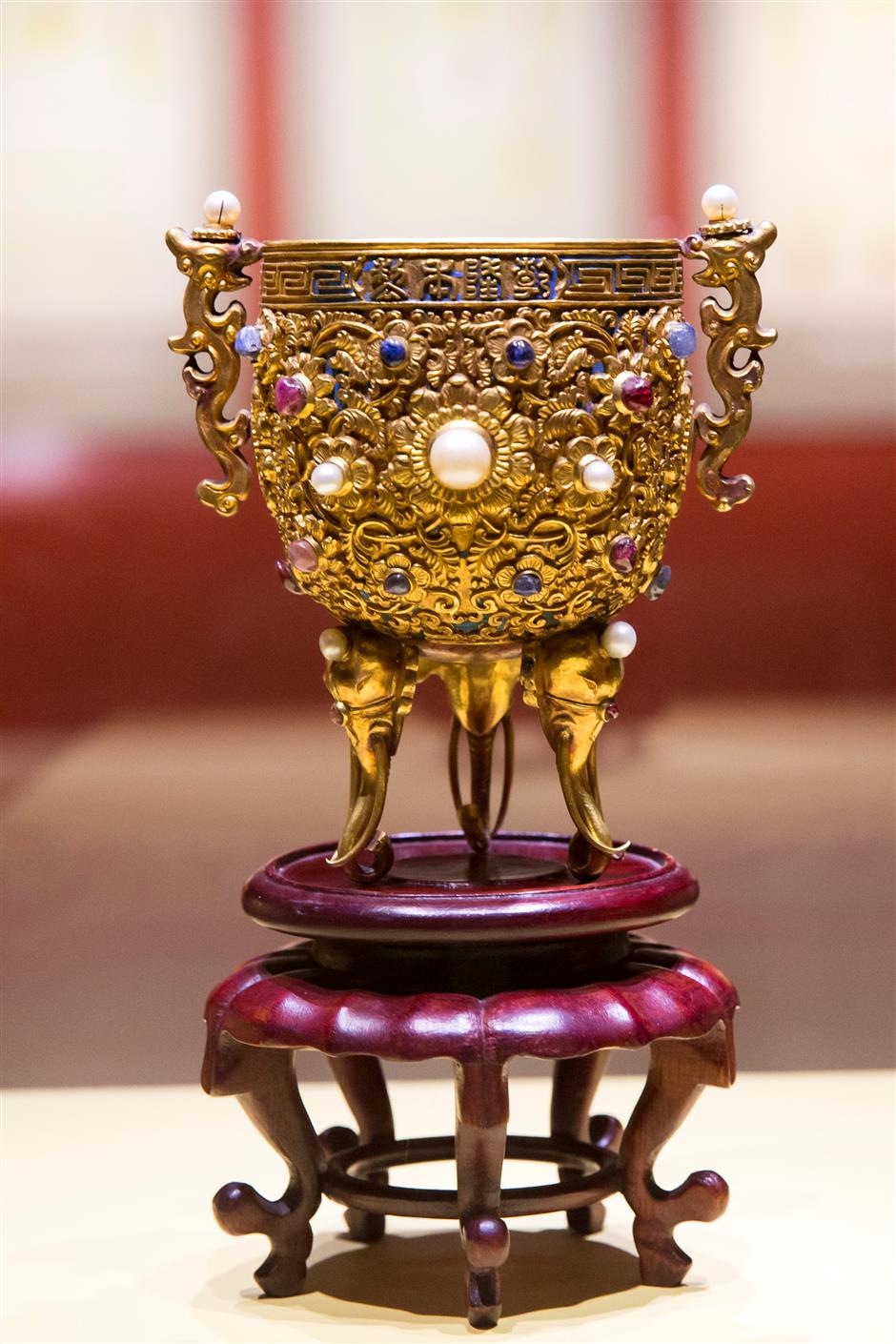 A wine cup, used once a year by the emperors of the Qing Dynasty (1644-1911), is a cornerstone of the imperial collection of the dynasty. The cup, made during the reign of Emperor Qianlong (1711-99), is named “Jinou Yonggu,” meaning “the golden goblet remains strong forever.”

The ancients used this type of golden vessel to represent the completeness of the sovereign’s territory and prosperity of China.

The wine vessel was used in the Opening Brush Ceremony held at midnight on the first day of the Spring Festival. The ceremony was created by Emperor Yongzheng (1678-1735) and officially established by Emperor Qianlong.

During the ceremony, the emperor would write auspicious messages for the new year and pray for peace, prosperity and order in the nation. According to the etiquette, the emperor needed to first write words in red and then in black.

In Chinese civilization, wine is often used during the ritual ceremonies, and the Opening Brush Ceremony was no exception. As a significant part of the ceremony, the alcohol must be Tusu wine, or widely known as Sui wine, as it is an essential drink in the ancient Chinese Spring Festival.

Legend has it that the wine was spread throughout the nation by Sun Simiao, a famous doctor of the Tang Dynasty (AD 618-907).

Hailed as “King of Chinese Medicine” by the later generations, Sun went around his neighborhood and handed out bags of Chinese medicinal materials in the twelfth month of the lunar year. He suggested that his neighbors soak the ingredients in wine and drink them on the Spring Festival Eve, which was believed to keep them away from diseases.

Unlike typical Chinese tradition, where the oldest would drink first before passing the cup to the youngest, the drinking order of Tusu wine is reversed.

Children drank Tusu wine first to celebrate they were one year older during the Spring Festival. The late drinking implies elderly people’s wish of holding back the years.

The drinking etiquette of Tusu wine in the palace was still different from civil society. Made by the imperial kitchen, the wine was sent to the Hall of Mental Cultivation and poured into the “Jinou Yonggu” Cup on the Spring Festival Eve. At noon on the following day the wine would be retrieved and tipped into another wine vessel for the banquet. It goes without saying that emperors were the first to drink Tusu wine. He then granted the wine to imperial concubines and officials, which was such a great honor for them.

Regarded as an auspicious vessel, the set of the “Jinou Yonggu” Cup was handed down for many generations and now one of it is preserved in the Palace Museum in Beijing.

The exquisite cup is made of opulent gold and weighs 500 grams.

It is also inlaid with different kinds of gems, including 11 pearls, nine rubies, 12 sapphires and four pink tourmalines.

Tourmaline, a representation of authority and identity then, was beloved by the imperial family of the Qing Dynasty, especially by Empress Dowager Cixi (1835-1908).

It is said that a tourmaline lotus was buried with her.

The cup’s handles are shaped as dragons, with the adornment of pearls, while the three legs are designed into elephant heads with long tusks and curled trunks. The cup is also decorated with baoxiang flowers — a pattern created based on the combination of a lotus flower and a peony.

The remnants of the iridescent blue kingfisher feather are still faintly visible on some parts of the cup.

The technique is called tian-tsui. The craftsmen cut and glued kingfisher feathers onto art objects ranging from headdresses to fans and vessels.

The art of tian-tsui thrived during the Qianlong reign. The use of dazzling kingfisher feathers resulted in the mass slaughter of the species so it is banned today.

In July 2006, a set of two special stamps themed on the gold and silver wares was jointly issued by China’s State Post Bureau and Poczta Polska, the biggest postal operator in Poland.

The “Jinou Yonggu” Cup, selected as the representative work of Chinese gold vessels, was printed on the stamps. Meanwhile, Poland chose a silver Baroque-style beer mug made in the 17th century. The two cultural relics, serving as “goodwill ambassadors,” represent their countries’ highest level of craftsmanship in goldware-and-silverware making at that time.