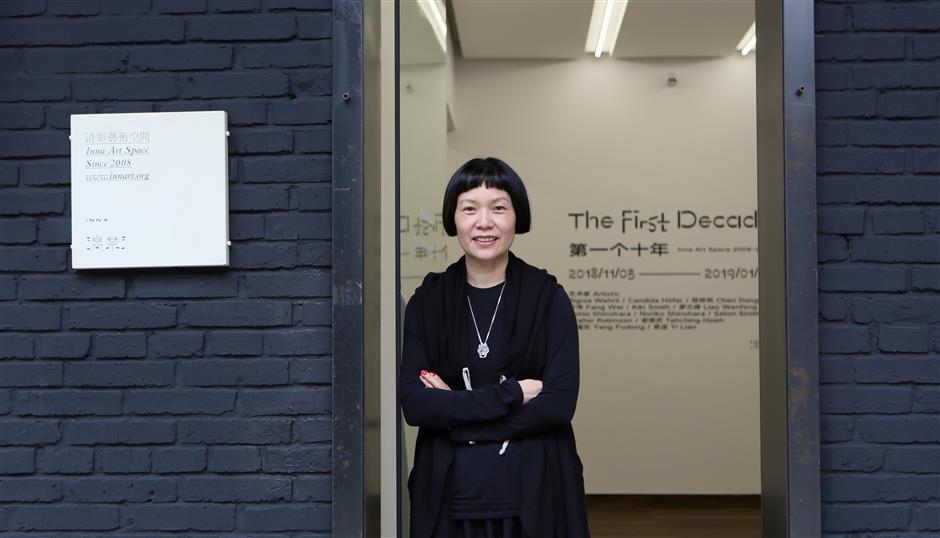 The couple came to Hangzhou for a brief stay to celebrate a 10-year anniversary exhibition, as one of the participating artists, at the Inna Art Space in the west end of the city.

The group exhibition displays works of 13 artists from home and abroad. Nearly half of them were artists Xu met and got acquainted with in New York after the gallery opened an office there in 2014.

Höfer brought her own work as well. 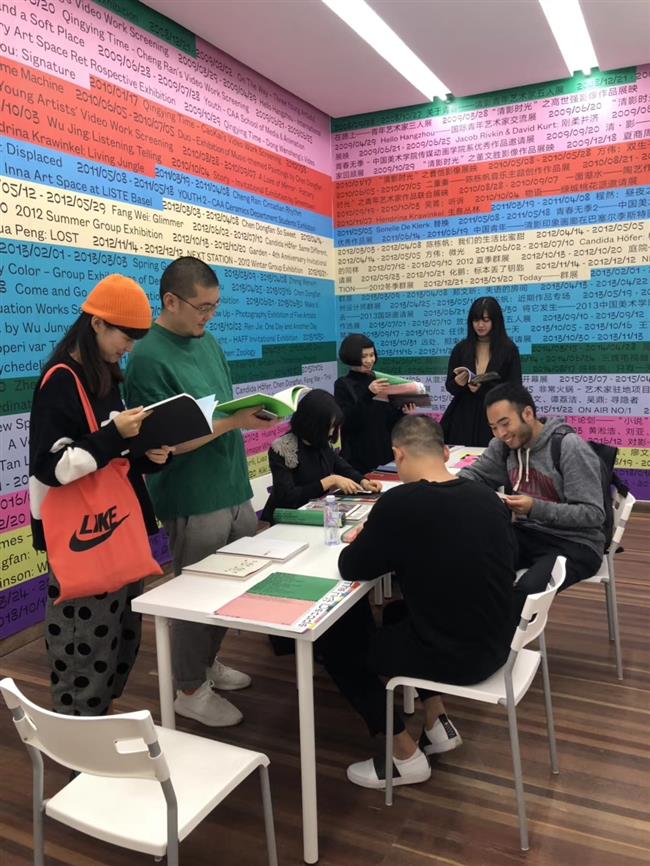 Visitors check on the year books of the gallery for the past 10 years.

Four serial photos show the same scene, an around-the-corner doorway inside an abandoned clinic in Lisbon, Portugal. Like most of Höfer’s works, it is an empty space. While the other works focus on the glamorous interiors of a well-lit opera house, a public library or cathedral, this one presents the tranquil contrast of light and shadows. The doorway is where the light comes from.

“It calls to mind a crucial mechanical part — it receives, transmits and it connects. Inna Art Space is such a place that connects people and stories, art and life, both openly and firmly,” Li Shengzhao, the curator, writes in the foreword of the exhibition.

The gallery was born out of nothing more than a pure passion for art.

Xu came back from Beijing in 2002 after quitting her job at a foreign trade company to open a film-processing store “Clepic Image” on Hefang Street in Hangzhou to pursue her own interests. Since 2008, it has been transformed into an art gallery and was renamed Inna.

“At that time we had one of only two digital printing machines in Zhejiang Province,” recalled Xu.

The area sits in the heart of Hangzhou’s old town, which had been a busy commercial district since the 12th century. But by the end of the 20th century traditional trades on the street waned and the area faced redevelopment. The city needed wider streets and higher buildings.

Fortunately, the old part of the district was saved thanks to a preservation plan launched by the government. In 2002, the Qinghefang Historical Neighborhood opened to the public and now it attracts nearly 30 million visitors a year.

The store grew alongside the rejuvenation of the area. The Hefang Street that connects the pedestrian commercial zone at one end and the West Lake at the other has never lacked visitors and attention.

The business went well but Xu was thinking about something different.

“At that time teachers and students from the China Academy of Arts often came to my store for film processing and printing. So I met a lot of young talented artists and I wanted to exhibit some of their works on my walls,” said Xu.

The first exhibition “Youth” opened on Hefang Street in September 2008. Several young graduates from the academy later joined it. The artists did everything on their own, hanging their art, writing texts, even handing out leaflets on the street.

“This is how we work at the art space even now. The artists do all the professional work,” added Xu.

Initially, the store appeared as an “alternative space” for exhibitions, while the printing business was still going on in the first few years of the gallery. Xu gradually realized if she wanted to go further she needed a “white cube,” a word in the realm of contemporary art referring to a purely white space for exhibiting art. 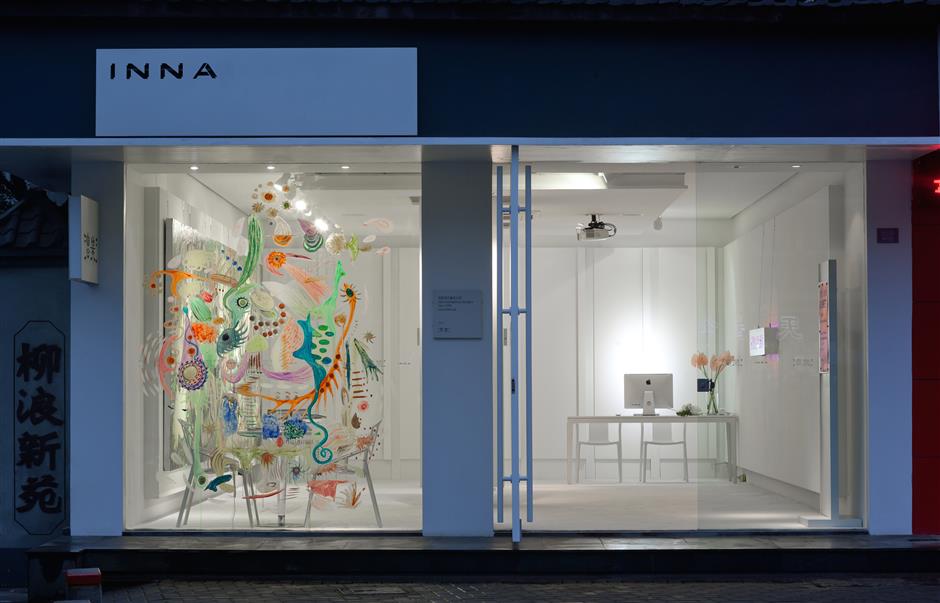 Inna Art Space’s previous premises on Hefang Street. The photo was taken when the gallery was revamped and reopened for Chen Dongfan’s solo exhibition “So Sweet” in 2012.

Although the art space was only a few hundred meters from the China Academy of Art, one of the two top art schools in the country, it did not necessarily mean that non-arty people understood what they were doing.

The gallery space then took up a first-floor storefront located in an ordinary resident’s block, surrounded by eateries, cigarette shops and boutique clothing stores.

“I remembered one time we had an exhibition comprised of installations made by reused garments, and a security guard nearby came over and told me ‘Finally you opened for business!’ He felt like we were always in a renovation because he never saw us sell anything,” Xu told Shanghai Daily.

In 2012, “So Sweet,” a solo exhibition by artist Chen Dongfan, was opened at the new white-cube space. And it was probably how the art space came to the attention of many next-generation artists now based in Hangzhou.

Liu Beining, a young artist recently back from New York, said before he saw a poster of “So Sweet” on campus, he was never aware of such a display of art.

“It was my first experience with a solo exhibition and the white cube gallery,” said Liu. “And I feel certain I am not the only one who has been illuminated by the exhibitions at Inna Art Space.”

Li Shengzhao, art director from 2015 to 2016, was impressed by Xu’s huge interest in art when she first met her in a cafe near the West Lake, introducing artists to an audience attending an art talk.

“I could feel the love from her expressions and the light in her eyes,” added Li. 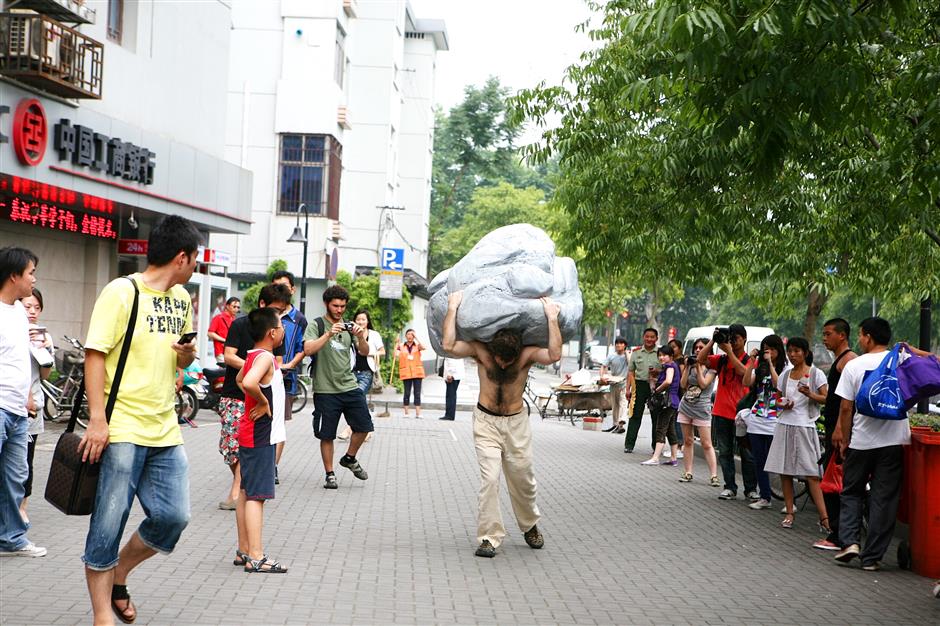 A performance art conducted near the neighborhood on Hefang Street in 2009, not far away from the gallery space.

At the same time, Xu found a better and larger space for her exhibitions in a faraway creative industrial park on the western outskirts of the city. She closed down the gallery space on Hefang Street in 2014 and focused exclusively on the new space located in the Eastcom, Hechuang Park.

The move coincided with a new wave of urban regeneration in Hangzhou that transformed the city’s industrial past into hubs of cultural and creative industry. From 2002 onwards, part of the town’s factories were left intact as industrial heritage, the rest just moved out of the city.

Hechuang Park was a telecommunications company factory, built between the 1950s and 1960s.

“When we moved here in 2012, it was still a very isolated place. It did not even have an entrance. We entered through a pathway right next to a wet market,” Xu said of the 250-square-meter space.

Days before the latest exhibition opened in Hechuang Park, Xu received a message on WeChat. The text informed her that several years ago, as a Hangzhou schoolboy, he had had skipped classes one day and found himself at the then Inna Art Space on Hefang Street, where he attended an artist’s lecture. As a result he was inspired to study art and informed Xu he had just graduated from the University of Michigan.

“This kind of thing let me know that what I do has an impact on others,” said Xu. “For the past 10 years, we try to nurture and grow with young artists and to make art a daily life. Recognition from the public is the most important thing for me.”