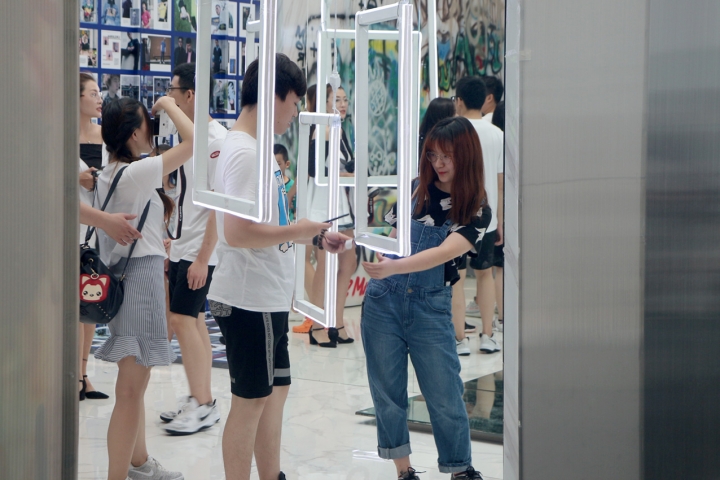 SHANGHAI — The new private art museums that have opened in Shanghai so frequently (six since last October), all led by a zealous collector with a mission, fall into two categories: those wishing to bring international perspectives to local audiences, and those supporting Chinese art. Xu Jiankang, the founder of the Powerlong Museum in Qibao, in the Minhang District of Shanghai, is proudly in the second category. Vast and monochrome, the museum specializes in traditional ink painting. Its centerpiece is Qi Baishi’s 12-panel “Zhichitianya Landscape Album” (1931), acquired by the Powerlong Group at auction for $29 million.

Without brush or ink, and with few domestic artists, it is unclear how Wavelength: Reset advances the museum’s agenda. But, this show of, “deconstructed urban landscape[s]” and “futuristic essence,” according to the exhibition handout, has put Powerlong on the map as a place of glitz and endless photo-ops.

The exhibition attracted publicity before its opening when Australian artists Ken and Julia Yonetani attempted to import chandeliers made of luminous uranium from their Crystal Palace series(2013-16). Radioactive material is strictly controlled in China, so the exhibition opened on July 8 without the chandeliers. Installed in a sequence of rooms built into three of the museum’s enormous halls, Wavelength: Reset resembles a film studio in which the audience shuffles between sets. At the opening visitors homed in on the possibilities of these spaces as alluring tableaus. By midnight, constellations of images were on WeChat, China’s primary social media platform (Instagram, like Facebook, is regarded as unreliable and locked by a national firewall). Qibao, once regarded as drab wilderness, became the place to be seen. The next morning lines of debonair visitors trailed around the building, armed with impressive DSLR cameras — a ubiquitous accessory of urbane and design-conscious Shanghainese. Curated by the CUBE Consulting Group, most installations in Wavelength: Reset seem inspired by the approach pioneered by Chinese artist Xu Zhen with his Made In Company, where objects are grouped under a sweeping brand identity.  In the exhibition, the installation Artworks Set (2015) bundles together pieces fabricated by his studio with commonplace trademarked items, such as empty soda cans, casting the artist as arbiter of taste or personal shopper. In “Uniform” (2008), Claudia Casarino floats an enticing wardrobe of inky gossamer garments in the air. At the other end of the spectrum, 100% Made in China (2018),  focuses on landfills, with a room of vividly colored trashcans and bespoke dumpsters courtesy of Trevor Andrew (a.k.a. Gucci Ghost). All the artist appropriate aspects of consumerism and elevate their materials into rarefied art objects. The most compelling backdrops for taking pictures within the labyrinthine exhibition space were the larger-than-life and endearingly goofy. Henrick Vibskov’s Gravity Orchestra (2018) was a full ensemble of elongated Muppet-like characters donning black and white evening suits, hung upside-down from a towering steel grid; it was a great installation for hide-and-seek. Similarly, WORLD a new perspective(2018), a crowd of stuffed gentle giants stitched together by Bas Kosters in a mind-blowing patchwork, had people posing beside them as if accompanied by a gauche friend who had tagged along. Matching with the white neon and silver surfaces was irresistible, too. Mushi Yang’s illuminated geometric design series, Transformation(2018) and Baoyang Chen’s suspended sign, reading Do Androids Dream of Electric Cows ? (2017) — a spiritual on Philip K. Dick’s 1968 novel Do Androids Dream of Electric Sheep — had a minimalist appeal. Luo Wei’s, Central Chrystal Maze (2018), felt more “anything goes”; an angular installation of giant polyhedrons, it looked like the jetsam of a space mission, with metallic walls, and the floor printed with screen shots. Social media demands that our lives are aestheticized. This was the allure of the exhibition for the legion of WeChatters, seeking their own spotlights. Exploring the aesthetics of life in a digitized world through fashion and surface appeal, Wavelength: Reset provided endless means for everyone to find — and post — new ways to be themselves.