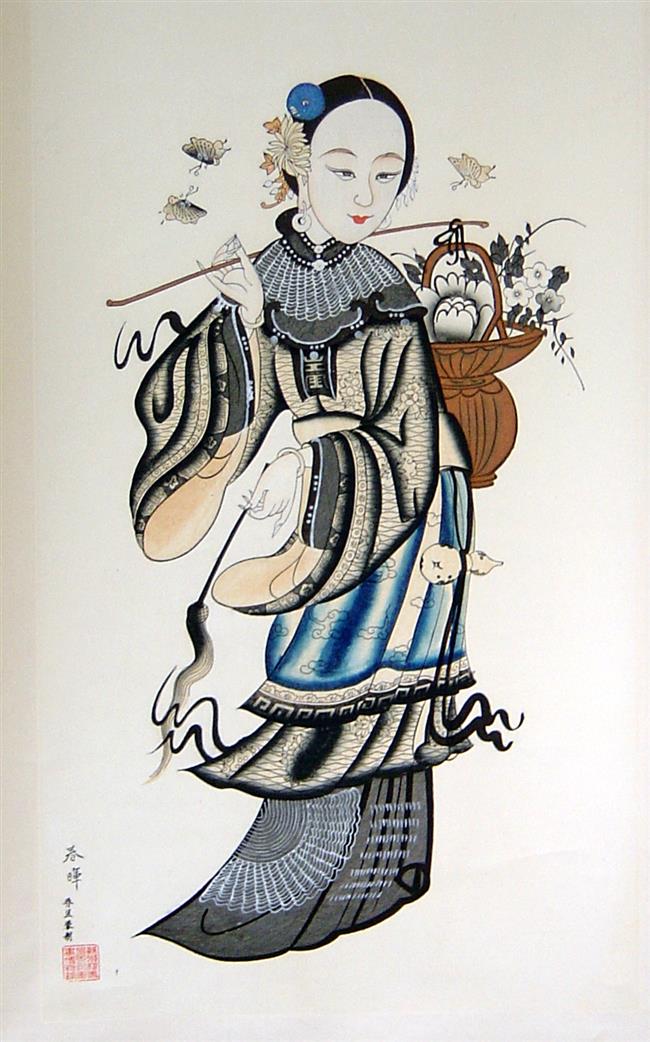 Taohuawu (literally “peach blossom dock”) in Suzhou, Jiangsu Province, is a leading producer of nianhua, or New Year’s pictures, a colored woodblock print. Thriving in the early Qing Dynasty (1644-1911), it embodies good luck and was once an indispensable part of Chinese New Year tradition.

“Taohuawu woodblock print is the only one of its kind that originates in the city rather than rural areas. It is a down-to-earth art form expressing the ideal life that Chinese long for,” says Qiao Mai, one of the best-known Taohuawu nianhua artists. “In my eyes, the value of this joyful art mainly lies in its positive connotation. No matter how tough life is, Chinese people always have hopes and wishes and embrace and love life.” 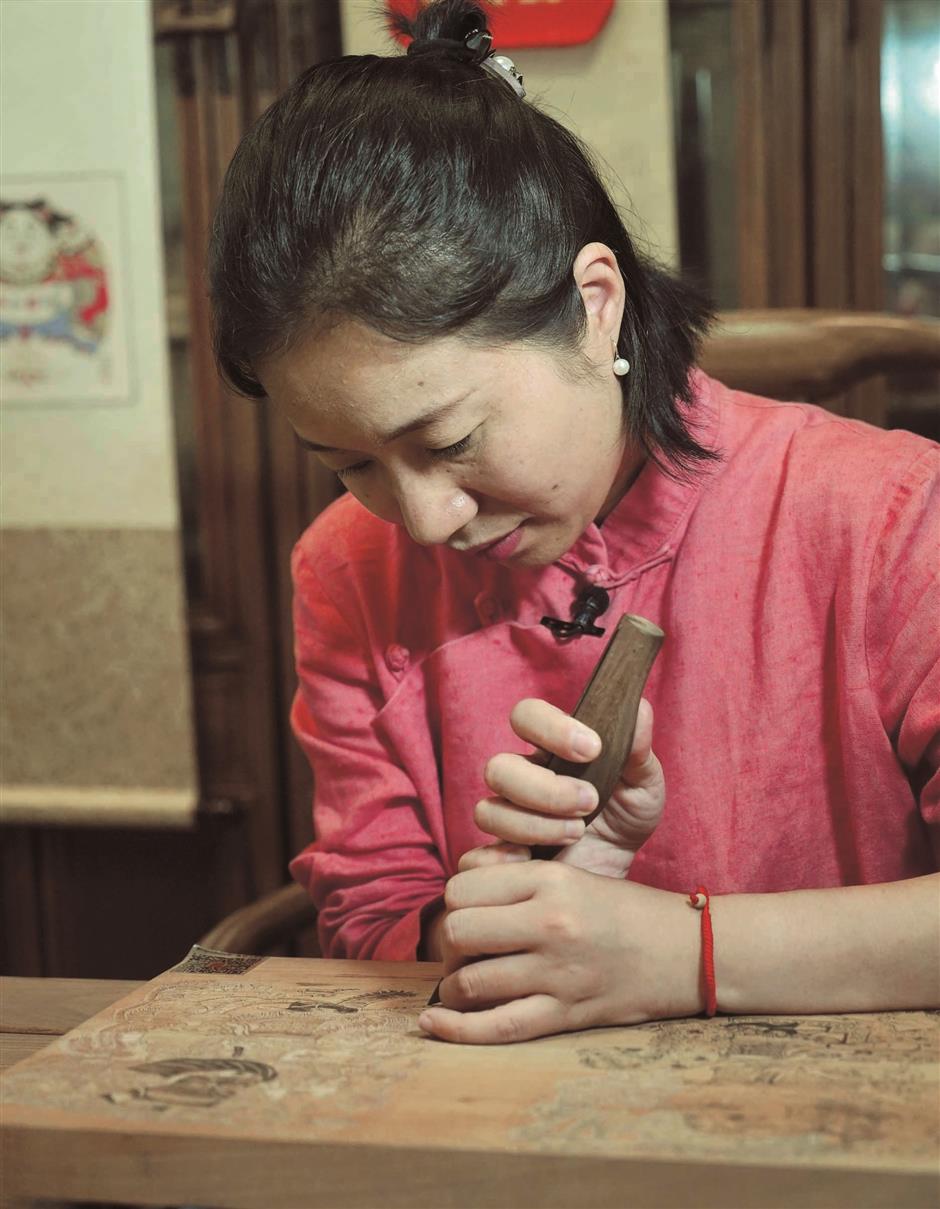 Taohuawu nianhua was not only influenced by Chinese aesthetics but also European copper plate printing, which is another distinct feature. 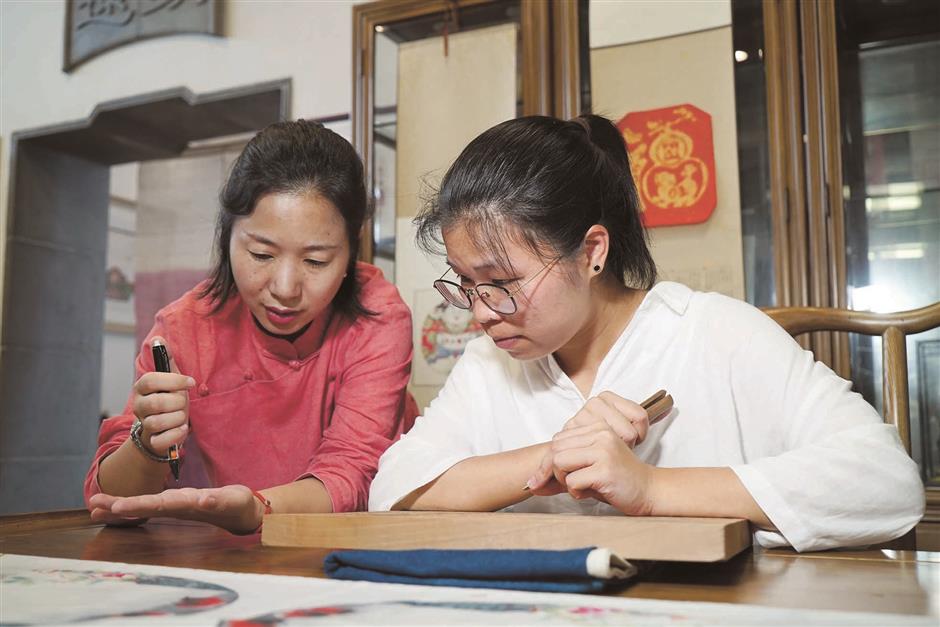 Portraying Chinese myths, deities, everyday life and landscapes, Taohuawu nianhua is not only art but also a window to the past, reflecting the history of Chinese society, beliefs, customs and life. 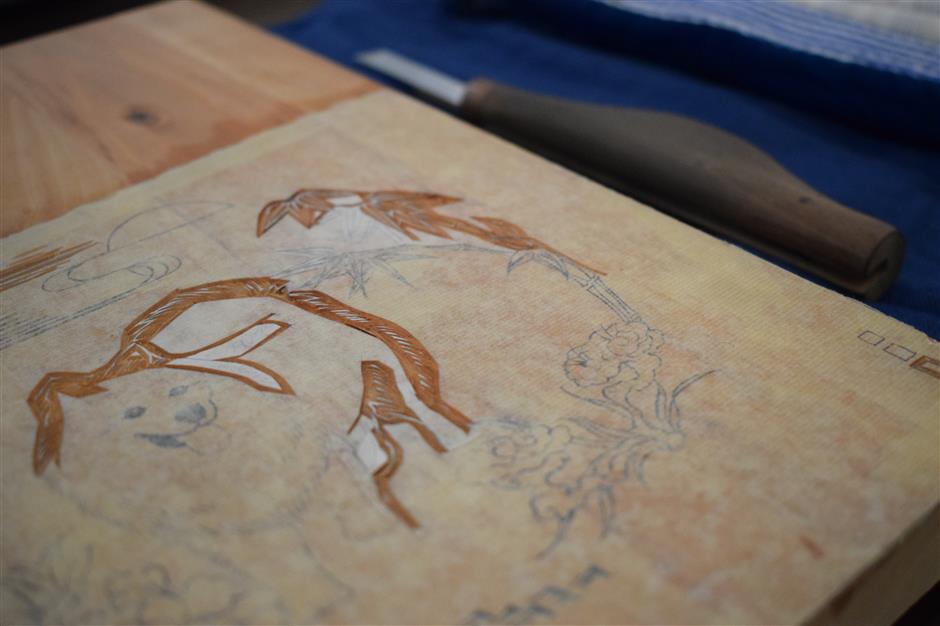 Unlike today’s artworks, ancient Taohuawu nianhua were characterized by fine lines, delicate pastel colors and deep morals beneath the works. Many of them are so exquisite that it’s difficult to distinguish them from literati paintings.

“In the early and middle Qing Dynasty, Taohuawu nianhua were mainly sold to the middle-class and depicted bustling Suzhou, a city then known for industry and commerce in China,” says Qiao. “Since the First Opium War (1840-42), the style of such nianhua shifted from being elegant to lively, and the colors became brighter. Featuring folk customs, traditional Chinese operas and historical stories, the woodcut prints were mainly purchased by farmers.” 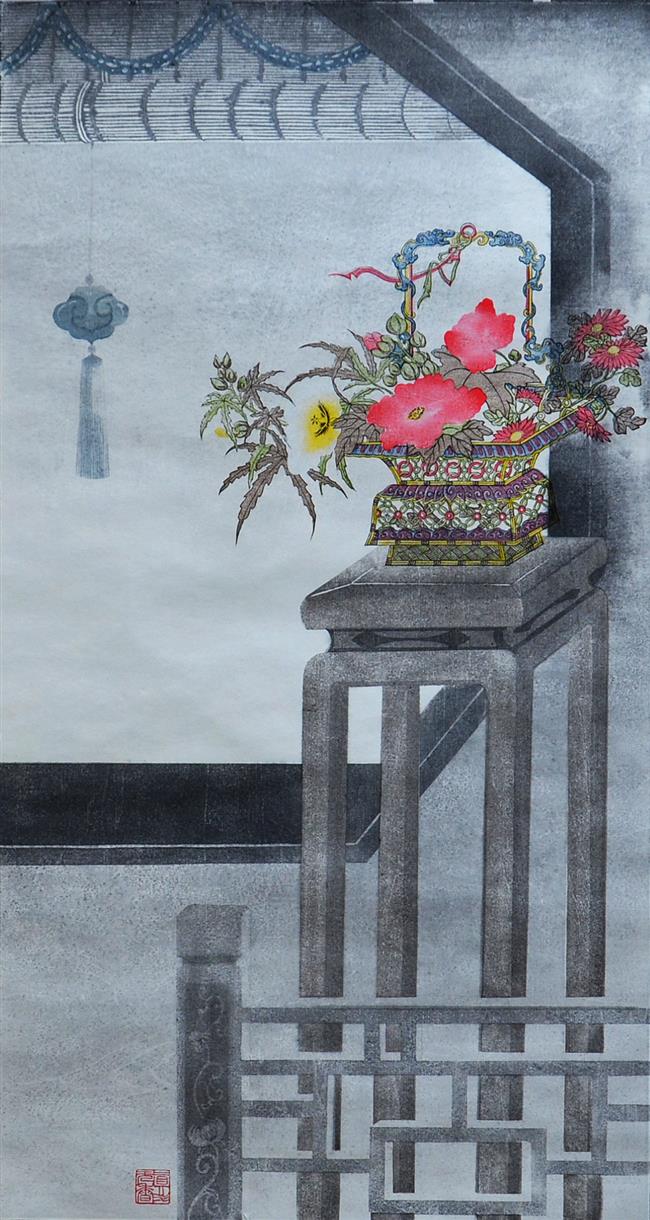 Traditionally, every family would hang the woodcut image of door gods inside their homes or on doors to ward off evil spirits and usher in good luck during the Chinese New Year along with other jovial images, like children holding peaches and goldfish and a full-figured woman holding a scroll with an idiom meaning maintaining harmony. 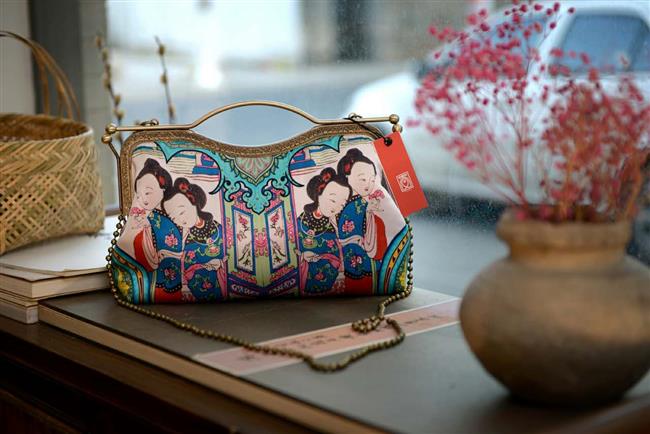 The tradition has faded over the years. There were 40 to 50 woodcut studios in Taohuawu during the Qing Dynasty.

On the brink of decline, Taohuawu nianhua was revived in the 1980s due to the reestablishment of the Taohuawu Woodblock Print Club and the founding of a research institute, giving young talent such as Qiao access to the culture.

Thanks to her family, Qiao has been exposed to ancient Chinese arts since childhood. She studied decorative art at Suzhou Art & Design Technology Institute where her relationship with Taohuawu nianhua began in 2001. It became the love of her life.

“Visiting a Taohuawu nianhuaexhibition held by the school, I fell in love with the art form at first sight. Just like a girl meeting her Prince Charming, I had a crush on it at the very start,” says Qiao.

Doing research on Taohuawu nianhua, Qiao tried to know more about what she called her Mr Right.

Qiao got a chance to deepen her connection with her love when, in 2002, she was selected as one of four trainees in the first Taohuawu nianhua workshop organized by her school. They were guided by the masters Fang Zhida and Wang Zude.

However, Qiao admits that there were challenges back then. The carving techniques that only took the teachers several minutes to demonstrate took her months of practice.

“Master Fang required us to print hundreds of pictures every day. We were not allowed to leave workbenches unless going to restroom or eating,” says Qiao.

The strict training was a tremendous pressure for Qiao, along with the low salary. Nevertheless, love conquers all, and Qiao is now dedicated to the art of Taohuawu nianhua.

“I intend to express my emotion and perspective on the world through my artworks instead of just imitating traditional pieces,” says Qiao.

Creation is now the largest challenge Qiao faces. Always carrying a small notebook, she writes down all the ideas inspired by her life. For example, a dandelion growing in a concrete jungle.

“Excitement, frustration, anxiety, surprise and cheerfulness — my mood swings during the creation process are visualized as an electrocardiogram,” says Qiao.

Taohuawu nianhua was designated China’s national intangible cultural heritage in 2006. However, in Qiao’s eyes, that implies the art form is in danger of dying out. Therefore, her studio has developed an array of creative products which are sold at the Suzhou Eslite Bookstore, aiming to attract younger generation to pay attention to the traditional art form.

“I had been always asked by my friends what on earth I was doing. I felt very depressed because even the people around me didn’t know Taohuawu nianhua, let alone the public. Therefore, I decided to taking the responsibility of promoting it,” says Qiao.

Scarves, postcards, handbags and wallets — a variety of products printed with Taohuawu nianhuapatterns are commercially successful. However, according to Qiao, selling the products isn’t the ultimate purpose.

“The creative products somehow can be regarded as a medium through which customers would ask me what the art form is and the meaning of the designs. The products serve as an opportunity for me to introduce Taohuawu nianhua to the general public,” she says.

Workshops are also held in her studio.

Zheng Meiyu, who is her early 20s, is one of Qiao’s apprentices. She graduated from Suzhou University’s business school but, like Qiao, she was deeply captivated by Taohuawu nianhua.

“Even the sound of carving wooden boards fascinates me,” says Zheng.

Regardless of her mentor’s advice to find a stable job, she chose to pursue her passion. Both Qiao’s and Zheng’s determination and persistence are forces behind the development of the ancient art form.

“I don’t feel lonely when I do woodblock printing, as the pictures, the knife, the wooden boards and the tools all communicate with me,” says Qiao. “They are waiting for me in the studio now. And I can’t wait to see them.”

From sketching to engraving and printing, making a New Year’s picture can take days or even years depending on size and complexity.

Then, artists paste the rice paper on a wooden board with the help of a coir brush. Pear tree wood, which is cheap and neither too hard nor too soft, is commonly used to make blocks. Soaked for a year, drying in the shade, splicing and planning, the blocks need to be processed before being used.

A quandao, or fist knife, is the main tool used for engraving. Sharpening a knife is the first skill that Taohuawu nianhua artists must master. The knife blade should be in the shape of a crescent.

“Getting hurt when sharpening a knife occurred frequently. At the beginning, even when the knife-sharpening stone had been worn down, I was still unable to make the crescent-shaped blade. However, the challenge can’t be skipped over, as a Chinese proverb goes, ‘Good tools are prerequisite to the successful execution of a job’,” says artist Qiao Mai.

Afterward, using different blocks for each color, artists carve successively the sketch and the parts of various colors on several wooden boards. The most common colors are red, green, yellow, cherry, purple and black.

There is one more step before printing — mixing paints. The traditional pigments, made of minerals, are natural while nowadays many artists replace them with watercolor. Adding a little water and glue to paints, artists use a coir brush to mix them.

Both glue and coir brushes are custom-made. Traditionally, glue is made of ox bone, which is stewed until the water turns into thick liquid. The coir used in woodblock printing is carefully selected and needs to be boiled and dried several times during sanfu period, or the dog days of summer.

“It is very laborious to work on such hot days. I ask my apprentices to make the coir brushes by themselves in order to let them know that they must treasure and treat the tools well,” says Qiao.

When all the preparation is complete, artists paint colors on carved wooden boards, then put blank rice paper on the boards and apply a coir brush to flatten the paper.

From outline to colored parts, from upper part to lower part, from dark to light colors, artists print pictures in proper sequence.

Visions of joy and prosperity across regions

Suzhou Taohuawu is representative of the southern school of nianhua, and Yangliuqing in Tianjin is its northern school counterpart.

The woodblock prints created in these two places along with Yangjiabu in Weifang, Shandong Province, and Mianzhu, Sichuan Province, are generally known as the “best four New Year’s pictures” in China.

They have their own distinctive features, but all evoke a joyful and prosperous atmosphere.

The history of Mianzhu nianhua can be traced back to the Northern Song Dynasty (960-1127). Thriving in the Qing Dynasty (1644-1911), the prints were sold both at home and overseas.

It is said that there were over 900 artists and 300 family workshops engaged in the production of Mianzhu nianhua with an annual production exceeding 12 million pieces at that time.

Mianzhu artists only print sketches on locally produced paper and then color patterns, which distinguishes it from other types of nianhua.

Symmetrical structures, dramatic designs, smooth and fine lines and intense contrast in color are all characteristics of the folk art.

Influenced by Yangliuqing genre, Yangjiabu nianhua also originated in the late Ming Dynasty (1368-1644) and flourished during the reign of Emperor Guangxu in the Qing Dynasty.

Its themes are varied, including traditional theater figures, animals, plants, children and deities such as the god of door, the god of wealth and the kitchen god.

Located in the western suburbs of Tianjin and adjacent to the Grand Canal of China, the longest and oldest artificial river in the world, Yangliuqing was a vibrant and multicultural town.

Originating in the late Ming Dynasty, Yangliuqing nianhua reached its peak in the Qing Dynasty.

In its heyday, there were 32 villages around Yangliuqing producing nianhua.