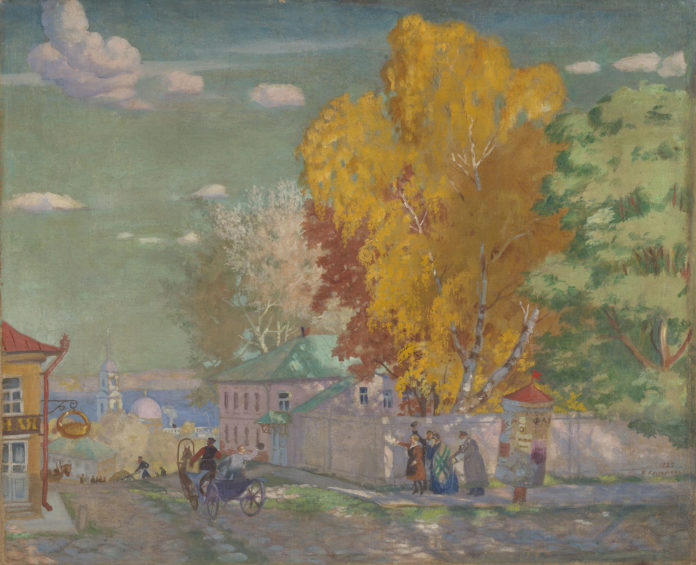 A magnificent work painted for a Nobel laureate is the highlight of MacDougall’s Important Russian Art Auction in London on 27th November. Boris Kustodiev’s elegiacally beautiful Autumn. The Student’s Farewell, was painted in 1923 (estimate £1,500,000–2,000,000), and boasts an exceptional provenance, originating from the collection of the Pyotr Kapitsa, winner of the 1978 Nobel Prize for Physics.

Kustodiev and Kapitsa had a long-standing friendship, and Kapitsa treasured the work, lending it to many exhibitions on the artist.

The artist’s daughter Irina recalled that Kapitsa, then a student, was first brought to their house in the autumn of 1921 by a family friend, Pyotr Sidorov. “P. L. Kapitsa came to our evening gatherings on various occasions, took part in charades, played pranks, made merry and showed tricks, ‘swallowing’ knives and forks,” she wrote (Boris Kustodiev. Pisma, zametki, intervyu …, Moscow, 1966, pp. 325–326). Every year, when he came home on vacation from Cambridge where he was working, Kapitsa would unfailingly pay a visit to Kustodiev and bring the artist oil paints, which were in short supply in Petrograd.

Imbued with a gentle nostalgia, Autumn. The Student’s Farewell presents an exquisitely idealised view of Russian provincial life, unmistakably bidding farewell to the concept of “Old Russia” and depicting a world far removed from the political turmoil of the 1920s. A student waves an exuberant goodbye to his gathered family as he prepares to enter university, clearly excited for a new life far removed from the gentle pace of the provincial town in which he has been raised.

By one or two cleverly rendered details, the artist tells us eloquently about each of his characters, who have clearly defined roles in society, and about their habits, social status and outward demeanour. A dashing cab driver holds onto a trunkful of belongings with one hand, whilst the red-bearded, stylishly dressed young man says his last goodbyes from the moving carriage to his relatives. His mother is wiping away her tears, his brother and sister are waving goodbye, and an old man wearing an out-of-date, military-style overcoat, who has evidently found it hard to reach the corner with everyone else and is leaning on a stick, is now silently staring after the departing boy. There is a poignant sense conveyed of life at a crossroads, capturing an occasion which is both thrilling yet profoundly emotional at the same time.

Just like Kustodiev’s human characters, the landscape too reveals a special kind of idyllic amalgamation. One may see in the townscape individual features of Kineshma, Yaroslavl or other places on the upper Volga, but, combined together as they are, these architectural impressions have been transformed into a wonderfully harmonious generalisation. According to the recollections of Kustodiev’s son, if someone recognised, for example, Kostroma in one of the paintings, the artist used to say: “No, it’s an imaginary town, put together from different places.” The same can be said about the setting of Autumn. The Student’s Farewell.

The importance of Autumn. The Student’s Farewell is attested to by its inclusion in a number of major exhibitions and publications on the artist. The work was included in the large Kustodiev retrospective exhibition of 1928 and in the landmark exhibition on the 100th anniversary of the birth of Kustodiev in 1978. It also featured in the first monograph on Kustodiev, written during the artist’s lifetime, by Vsevolod Voinov in 1925. It is one of the few paintings of such significance and celebrated ownership still remaining in private hands. Another Kustodiev owned by Kapitsa was sold at Christie’s in 2012 for $7m, indicating the strength of demand for this particular provenance. As such, its appearance on the market represents a rare opportunity to acquire a work of this calibre.