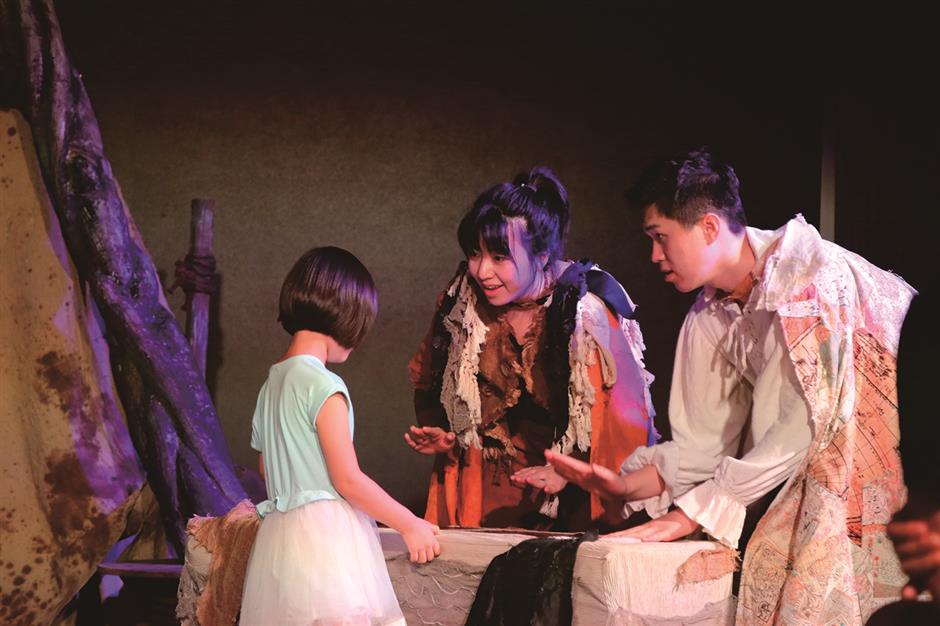 It’s not common practice for the cast of a play to ask every individual’s name in the audience before a show. But the five actors in “Storm” begin every performance this way. Their audience, often limited to just six, are children suffering from autism.

“Storm” tells the story of what happens on a small island to five characters, including a magician, his servant and a wild beast. The lighting effects and stage settings, as well as the singing and dancing, are designed to attract the children’s attention, an audience that may not always behave as expected.

Beibei, a 13-year-old girl, watched the show at the Minhang Special School for Mentally Retarded Children. She smiled during most of the show, while looking to the back row from time to time to her mother, who sat just a few steps away from the stage and auditorium area.

“She laughed a lot, that means a certain level of understanding of the show to me,” said Beibei’s mother surnamed Wang, after the 40-minute performance. “The show is easier for the children to understand than their normal classes.”

It was Beibei’s second time watching the play created for special children, so it looked more familiar to her this time.

Their “Storm,” as well as two other shows called “Gentle Giant” and “Moon Song,” were performed at Shanghai Children’s Art Theatre in April. 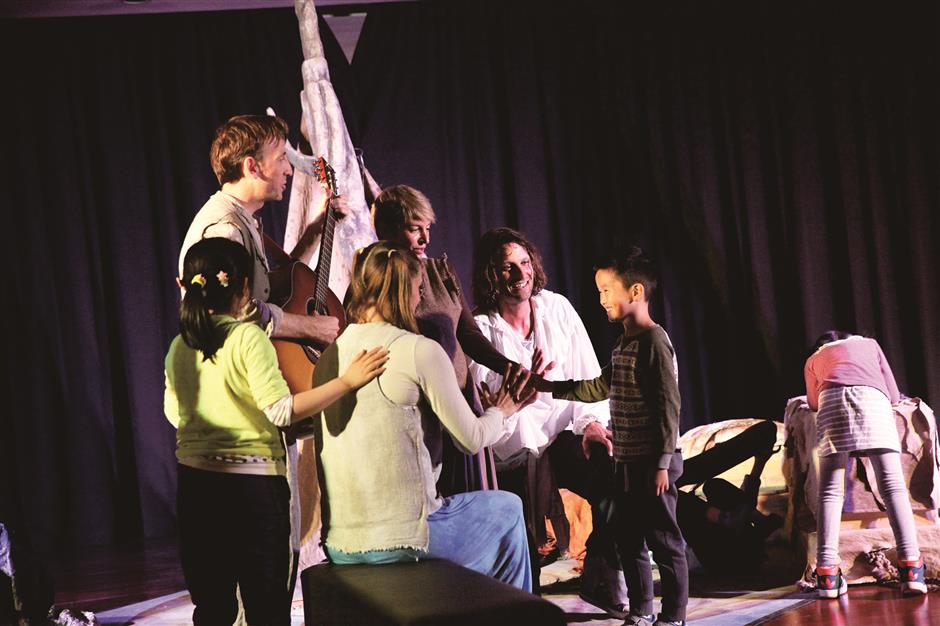 A scene from immersive theater “Storm” by Bamboozle.

Bamboozle was founded in 1994 by Christopher Davies and Sue Pyecroft. Over the past 25 years, they have been focusing on developing and delivering high-quality, interactive multi-sensory theater experiences for children and young people with learning disabilities as well as those with emotional and behavioral difficulties.

In each production, they make sure there is time and space for children to be able to interact at their own level and in their own time. They also need to consider that each show needs to be multi-sensory so that those who are visually impaired have enough auditory and/or tactile stimuli to engage with.

Back then there were no plays designed for special children in China and it was also a very niche market everywhere else.

Liang believes every child has the right to enjoy the best-quality theatrical experience, no matter special or not.

She and her team at SHCAT introduced Bamboozle’s immersive theater to Shanghai in 2017. Since then, they have reached 4,748 people in 174 performances.

The shows were ground-breaking in China. Many of the children had never been to a theater, as they may not have been able to sit through a show quietly.

“We design our shows so that the audience members are able to experience them in ways that are accessible to their particular needs,” Davies, Bamboozle’s artistic director, said. “Children are invited to engage with elements of the show at their own pace. We invite adults who come with the children to sit back and allow them to make their own decisions about how they engage. This gives them a chance to make their own decisions and this enables them to gain confidence in their own abilities.”

Each show accommodates a maximum of six children and their families and teachers and is particularly suitable for disabled children who use a wheelchair.

Bamboozle’s performances in Shanghai have been extremely successful. Many families said it was a rare chance for their children to enjoy themselves, and the company “gives sunshine to the children.” One child even hugged a member of the “Gentle Giant” cast after the show was over and said: “I don’t want to go anywhere. I just want to stay here!” 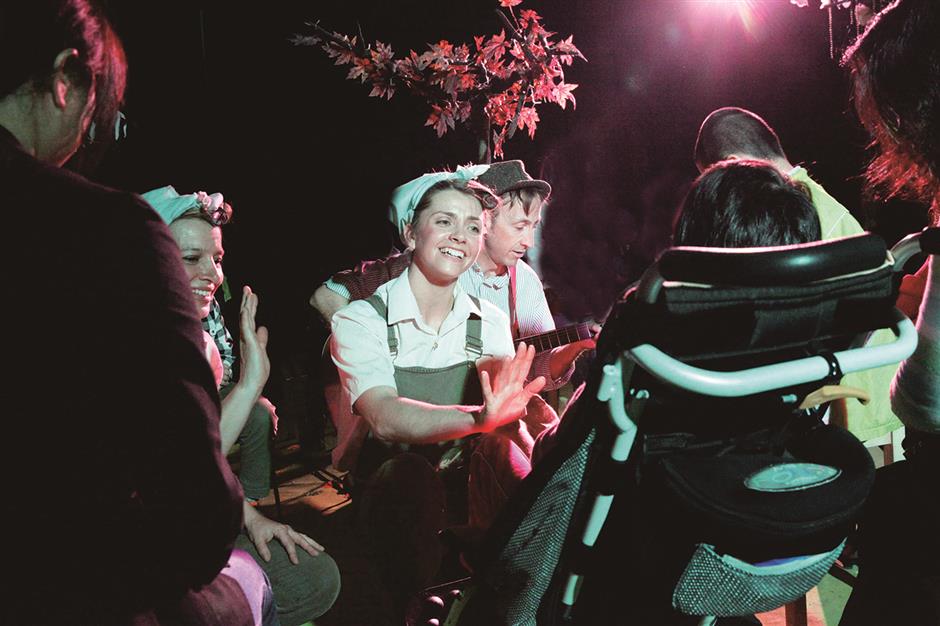 “Down to Earth” is a show created for children with cerebral palsy and Down’s syndrome.

The success inspired Liang and her team to produce Chinese versions of the shows. The first localized production they worked on with Davies’ team was “Down to Earth,” a show created for children with cerebral palsy and Down’s syndrome. SHCAT hired three full-time professional actors for the project and “Down to Earth” made its debut in September last year.

“It is interesting to us to discover that disabled children in China are very similar to disabled children in the UK and around the world. Of course there is the different language but there are not many words used in our productions for these audiences and theater can overcome language to a large extent anyway.” Davies said about the Chinese localization, “We have found that children on the autistic spectrum display the same characteristics in China as they do in the UK.”

With only six children and their families in the auditorium every time and the ticket price set at 150 yuan (US$21.4) for each family, the revenue is far less than the production costs. SHCAT is running the program as a charity project.

They call the project “Starfish’s Wish,” a name inspired by a story Davies shared: Every day many starfish are washed onto a beach and die from sunburn. A woman goes to the beach every day and throws stranded starfish back to the sea. She is challenged that she is not able to save every starfish that is going to die, and her answer is: “Yes, I know that. But for the starfish I throw back to the sea, it means a 100 percent life opportunity for them.” That is the same spirit shared by Bamboozle and SHCAT. Although they may not be able to reach every special child and one single theatrical experience cannot change their lives, the children definitely get 100 percent attention and care during those 40 to 45 minutes.

Believing the ticket price might still be a burden, SHCAT used its online box office and invited fans to buy tickets and donate them to special families. They received more than 150 donations overnight, giving 150 families the chance to go to the theater.

The project holds forums and master classes for medical staff, special education experts and theater talent to discuss how to give special children a better experience.

SHCAT also works with special schools on a special tour, allowing more children to access the shows at school.

“Down to Earth” toured Shanghai special schools in September last year and SHCAT produced their second immersive production, “Storm,” this year and performed it in special schools in the Pudong New Area and Qingpu, Minhang and Fengxian districts last month, with free entrance for students.

The age of the young audience ranges from 5 to 14. Some may sit quietly through the whole performance, while others may run around the stage, asking the actors questions even when they’re singing, or even refuse to enter the room.

Their parents are asked not to interfere with those reactions. The children are allowed to fully relax and do whatever they want during the show.

Chen Xianxian, an actress in “Storm,” was a special education teacher before she joined the cast.

“The biggest difference between being a teacher and an actress here is that I get to interact with the children as equals,” said Chen. “As their teacher, I always wanted to tell them what to do, push them to learn things. It makes me to rethink relationships between people.”

Asked if unpredictable reactions from the children would be a challenge, Chen said it was more a kind of expectation for each show.

The SHCAT team is hoping to bring these shows to more schools and communities in Shanghai, as well as other cities in the Yangtze River Delta region if possible. In 2020, they will produce another immersive theater production with Bamboozle and tour it in both China and the UK.

Liang said that through the “Starfish’s Wish” project, they hope to get more and more people to understand the concept of “listen, wait, respect and don’t judge.”

Liang said: “I believe that if everyone uses this concept to treat each other, the whole world we live in will be more warm and tolerant. The special children’s families won’t be the only ones that benefit from a society like that, every one of us will benefit too.”