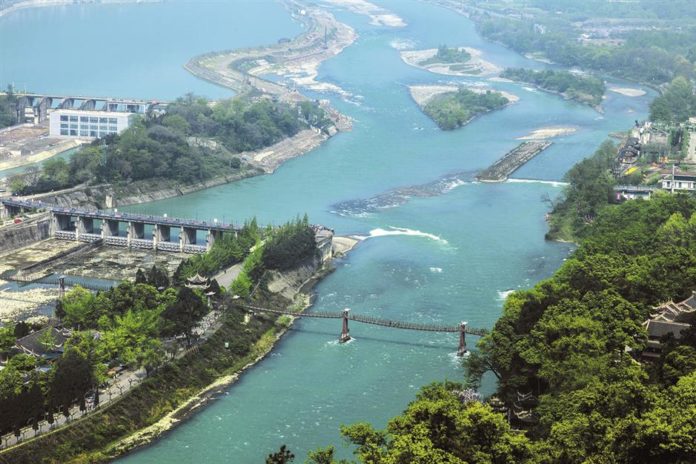 Dujiangyan, or Dujiang Weir, refers to an ancient irrigation and flood-control system in Dujiangyan City in Sichuan Province, which is one of the must-sees for tourists.

Standing at the weir and watching the surging river spitting and running through is said to be a great experience for appreciating not only the beauty of nature but also the great talents of the ancient Chinese. The system constructed around 256 BC is still working today, irrigating over 6,600 square kilometers of land and controlling floods. The Dujiang Weir, the Zhengguo Canal in Shaanxi Province and the Lingqu Canal in the Guangxi Zhuang Autonomous Region are collectively known as the “three great hydraulic engineering projects by the Qin Kingdom.”

Although famed as “the land of abundance,” Sichuan Province was not always in that way. With a sharp altitude drop from Dujiangyan to Chengdu, the Chengdu Plain was prone to flooding, as the Minjiang River, a major tributary of the Yangtze, rushes down from the Min Mountains and slows abruptly after reaching the plain, filling the watercourse with silt. The plain was often underwater in the rainy season and a thousand-mile barren patch in drought.

A waterway had been made at Minjiang River out of the mountain around 500 BC by the ancient ruler there, to distribute some of the water to the Tuojiang River to reduce the flood risk.

And in 256 BC, Sichuan governor Li Bing and his son, both engineers, led the construction of Dujiangyan, with support from King Zhao of the Qin Kingdom in the Warring States Period (476-221 BC), who thought highly of the strategic position of Sichuan in uniting China.

Rather than a simple dam, Li and his son planned to harness the river by channeling and dividing the water. Three projects were made to work in harmony, as a safeguard against flooding and to keep the fields well supplied with water. They were the “Fenshui Yuzui” (Fish Mouth Levee), the “Feishayan” (Flying Sand Weir) and the “Baopingkou” (Bottle-Neck Channel), with 100,000 taels (5,000 kilograms) of silver from the king and a team of tens of thousands of workers. 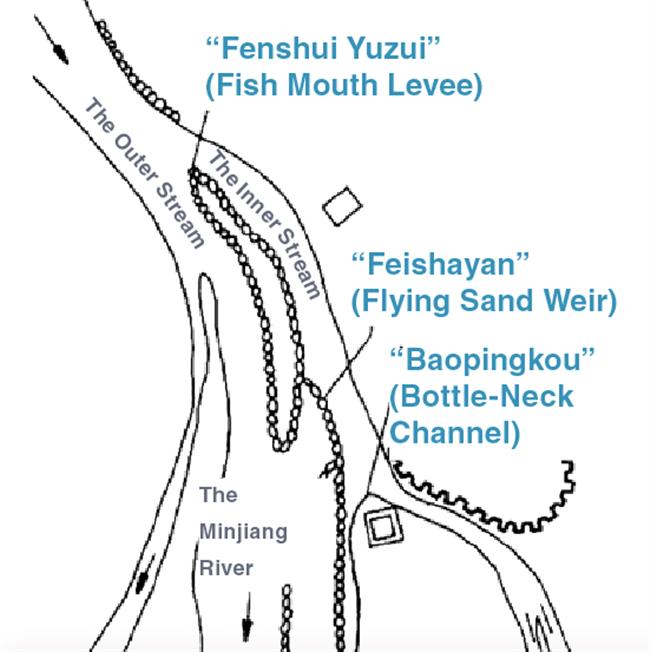 With careful study of the landform and water conditions, Li proposed building an artificial levee to redirect a portion of the river flow and cut a channel through the Yulei Mountain to discharge the excess water of the Minjiang River into the dry Chengdu Plain beyond.

The Fish Mouth Levee with its conical head resembling the mouth of a fish is the key part of Li’s plan. It is an artificial levee that divides the water into the Inner Stream toward the plain in the east and the Outer Stream in the west joining the Yangtze River eventually. The Inner Stream is deep and narrow, while the Outer Steam is relatively shallow but wide. This special structure ensures that the Inner Stream carries approximately 60 percent of the river flow into the irrigation system in the dry season. But in flood season, this amount decreases to 40 percent of protect people and farmland from flooding. In addition, the wide and shallow Outer Stream drains away the rest, flushing out much of the silt and sediment.

The levee was constructed with zhulong (bamboo basket) — long sausage-shaped baskets of woven bamboo filled with stones, which was widely used for water conservancy projects in fast flowing currents.

The Inner Stream then flows through the Bottle-Neck Channel gouged through the Yulei Mountain.

Cutting a channel through a mountain was especially difficult in the time before gunpowder was invented. Li used a combination of fire and water to heat and cool the rocks until they cracked and could be removed. It took eight years to finally complete the 20-meter-wide, 40-meter-high and 80-meter-long channel.

With a narrow entrance like a bottle neck, the channel is expected to work as a check gate, creating the whirlpool flow that carries away the excess water over the third construction — the Flying Sand Weir.

The 200-meter-wide Flying Sand Weir connecting the Inner Stream and the Outer Stream is a third important gear to guide water.

The Weir, also made of zhulong, was set about 2 meters higher than the bed of the Inner Stream. It ensures against flood by allowing the natural swirling flow of the water to drain out excess water from the Inner to the Outer Stream. In addition, the swirl also drains out the silt and sediment that failed to go into the Outer Stream, which contributed to its name “flying sand.” Facing big floods in ancient times, it might crack naturally and lead most water back to the Minjiang River.

Apart from the three important gears, Li also set up an alarm system and maintenance principles to keep the system working in long term. Li set three stone figures of about 2 meters high in the river as a reference for water levels. The water surface should not be lower than the statue feet in dry season, and not higher than the shoulders in rainy season. Otherwise, there would be draught or floods.

One of the statues is believed to be Li Bing, one is suspected to be an assistant of Li, while the third one remains unknown with its head missing.

Even if the Dujiangyan system helps drain out much silt, it is still inevitable for the silt and sediment to accumulate in the riverbed. In every draught from winter to spring, the local government organizes people to remove the mud from the bed and strengthen the levees and weir.

Li buried a stone horse set in the middle of the Inner Stream, which marks the proper height of riverbed. The mud removing work is not completed until the back of the stone horse uncovered. The function of the stone horse was later replaced by huge wotie (lying iron rods) in the Ming Dynasty (1368-1644).

Four iron rods are still working under the riverbed, respectively buried there in the Ming Dynasty, the Qing Dynasty (1644-1911), 1927 and 1994. Replicas of the four rods are exhibited at the Lidui Park.

After completing the Dujiangyan system, Li kept on leading the residents in building irrigation networks, yet he eventually broke down from overwork. To commemorate the great governor and his son helper, a temple named Erwang (Two Kings) was built on the riverbank at the foot of the Yulei Mountain.

The levee and weir were reinforced by concrete in recent years. And a scenic spot was created around the system, attracting thousands of visitors.