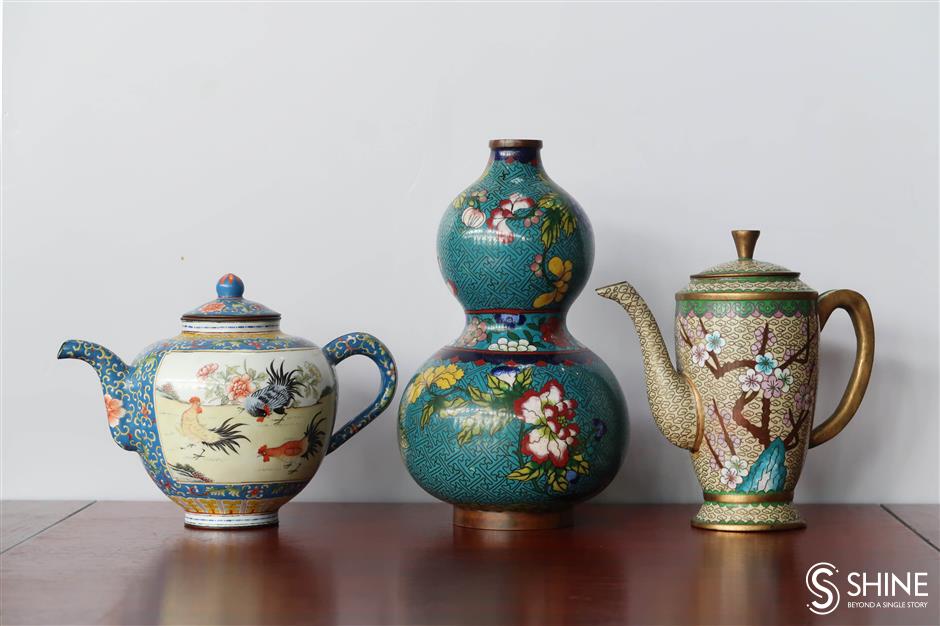 Cloisonné, an art form that originated in the Middle East, took firm root in China after it was introduced sometime around the late 13th century. In modern times, it is most commonly associated with China, thanks to craftsmen here who elevated it to a high art genre.

In China, such enamelware is called jingtailan. It is so highly prized that gifts of cloisonné are given to visiting dignitaries by national leaders.

Jingtai is a reign name of the seventh emperor of the Ming Dynasty (1368-1644). During that reign, Chinese cloisonné reached a peak in craftsmanship, and blue was the predominant color of artifacts.

Although Beijing is commonly regarded as the home of Chinese cloisonné, there is a jingtailan museum in Shanghai. Founded by Wu Lin four years ago, the museum displays his collection and gives visitors insights into some of the stories behind the exquisite pieces.

Entering the Baoshan District museum, I saw a row of huge Chinese cloisonné vessels. According to Wu, the series of Chinese zodiac zun was exhibited at the 2010 World Expo in Shanghai. With lids cast in 12 animal heads, the vessels were co-designed by Wu and Zhang Tonglu, a great master of Chinese cloisonné-making.

“I have been to 48 countries,” said Wu, a member of the Shanghai Collection Association. “People all over the world like the art of cloisonné. Every time I go abroad, I take a large suitcase and visit local antique stores to find hidden gems.” 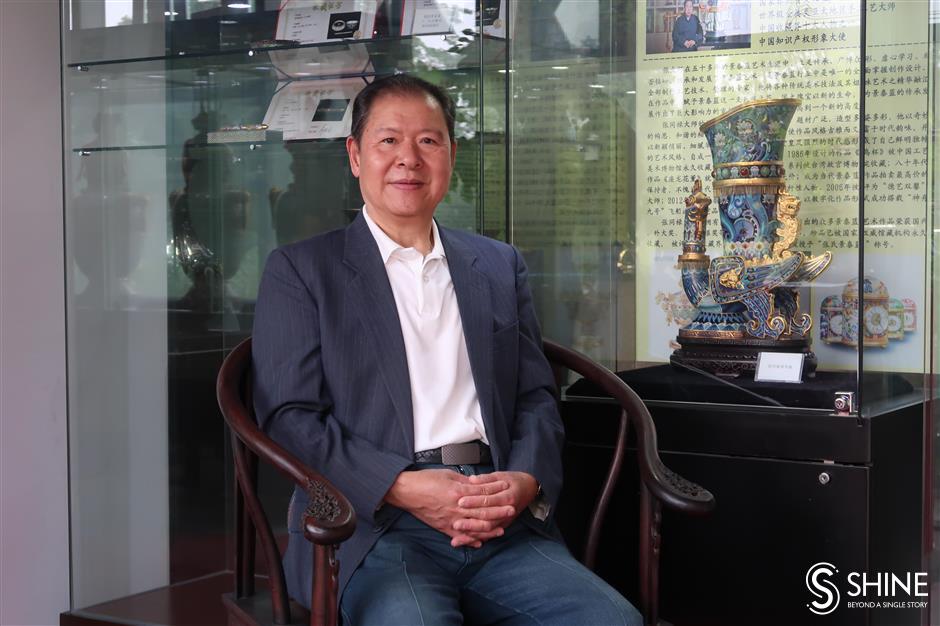 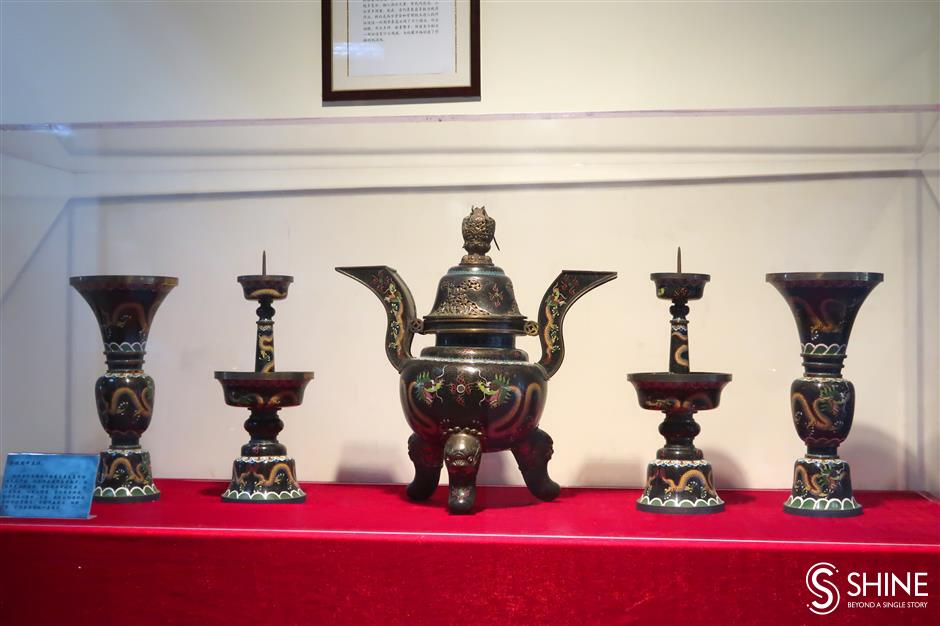 A set of five black Chinese cloisonné ware made as ceremonial vessels to contain incense, candles and flowers

During a trip to Japan, Wu was told by the young owner of an antique store that his father had some Chinese cloisonné at home. Wu visited the elderly man the next day. The Japanese octogenarian showed him a set of five black Chinese cloisonné ware, stored carefully in a wooden box.

Decorated with dragons and clouds, the Qing Dynasty (1644-1911) ware, called wugong in Chinese, were made as ceremonial vessels to contain incense, candles and flowers. It was rare to see such well-preserved, mid-sized wugong, according to Wu.

“The elderly man said that he had been to China when he was young and bought the wares on Liulichang Street in Beijing,” said Wu. “He told me that if I liked the Chinese cloisonné, I could have them at no cost.”

Wu, of course, was shocked by the offer. The elderly man explained his reason.

“He said he had been a member of the forces that invaded China and killed Chinese,” Wu said. “He told me he was deeply ashamed of his role in the invasion.”

Wu eventually researched the market price for the objects and later paid the man, who died two years later. His son wrote a letter to Wu, saying that the friendship between China and Japan would be passed down from one generation to the next.

It is not the only time that Wu has brought home treasures that had ended up abroad. While in London once, Wu searched for Chinese cloisonné, visiting auction companies, collectors’ houses and a local antique street. But he found nothing.

“But there were two antique stores on the street that I hadn’t visited,” he said. “I had almost lost hope but decided to take a look anyway. They were closed, so I could only peer through the windows. Suddenly, something hidden in the corner of one caught my eye.”

He managed to phone the owner from a number left on the door. In the end, he bought four elaborate Chinese cloisonné works made in the Qing Dynasty.

“Persistence is a significant trait for collectors,” said Wu. “I feel proud that I could restore those treasures back to their birthplace.” 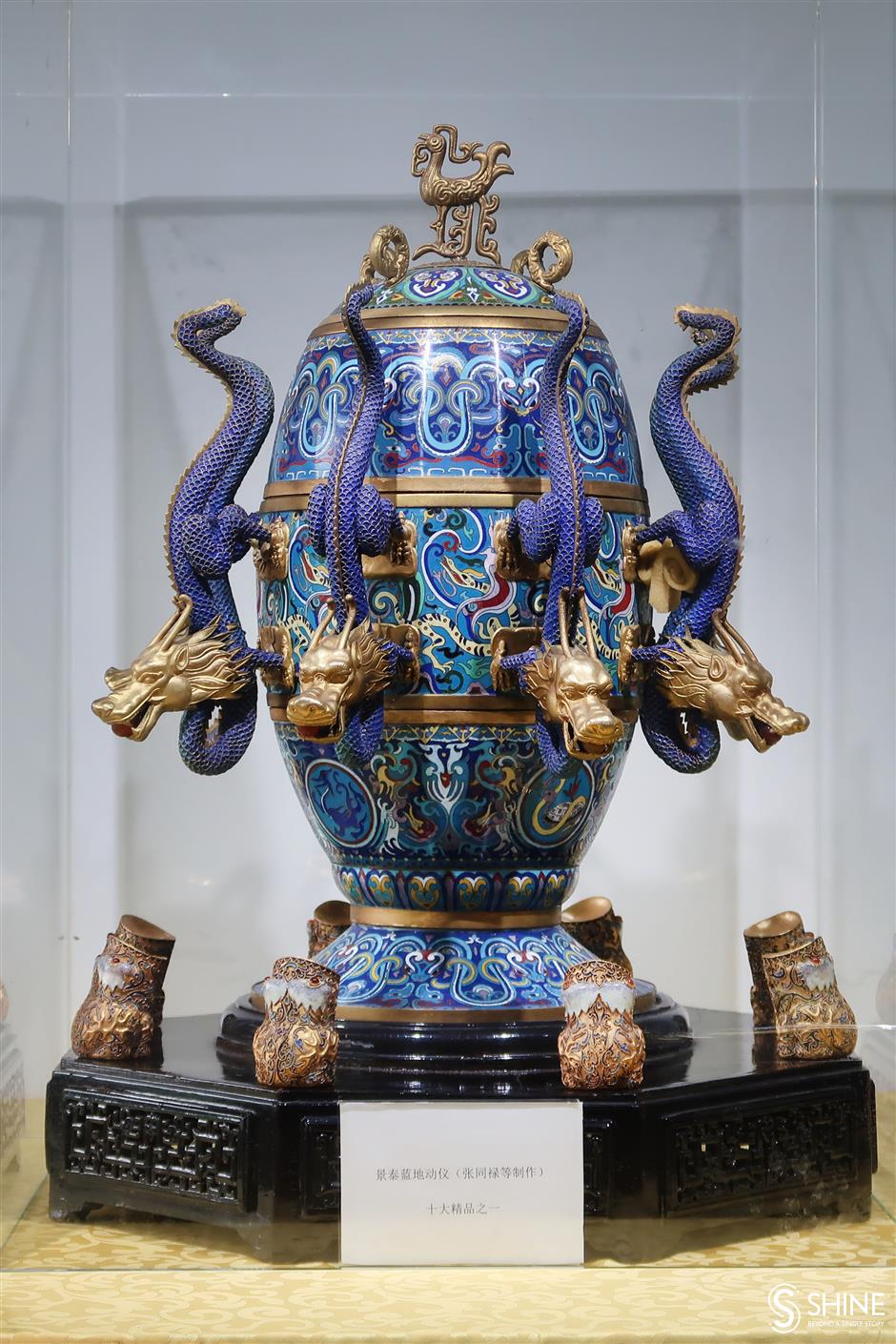 A Chinese cloisonné seismoscope, mainly made by Zhang Tonglu

Since its establishment, the museum has welcomed more than 100,000 visitors. Most are students.

Wu delights in telling his stories to visitors. He also gives talks in neighborhood communities and answers questions about Chinese cloisonné online. He has built a website and is writing a novel with a cloisonné theme.

Wu tells the story of renowned architects Lin Huiyin and Liang Sicheng. Unbeknownst to most people, they were also protectors of Chinese cloisonné. Distressed by what they saw as the demise of a brilliant art form, they established a jingtailan rescue team in the architecture department of Tsinghua University in 1951.

“Unlike other art forms with tens, or hundreds, of masters, Chinese cloisonné has only fewer than 10 great masters,” said Wu. “It is not a popular form of collecting. Because of that, the market in Chinese cloisonné is pretty stable.”

The word “cloisonné” derives from the French word cloison, which means partition. It refers to the wires or strips of metal originally used to partition a surface into compartments into which enamel was cast.

Chinese cloisonné is a comprehensive art. A cloisonné work requires as many as 108 steps, which can be mainly divided into seven processes: making a copper body, bending wire into shapes that define the colored areas and gluing it to the body, firing at 900 degrees Celsius, enameling, firing at around 800 degrees Celsius, polishing and electroplating with a film of gold.

“There is a saying about Chinese cloisonné: yi qi jiu shao, or ‘Chinese cloisonné ware, firing nine times.’ The process of enameling and firing needs to be repeated as the volume of enamel layers shrinks after being fired,” Wu said.

Traditionally, the cloisonné wire is glued with bai ji, an herb that is popularly used in traditional Chinese medicine. It disappears once fired. In the days before electricity, ancient craftsmen gilded gold instead of electroplating.

“Preserving and publicizing the culture of Chinese cloisonné are the major tasks for the rest of my life,” said Wu.