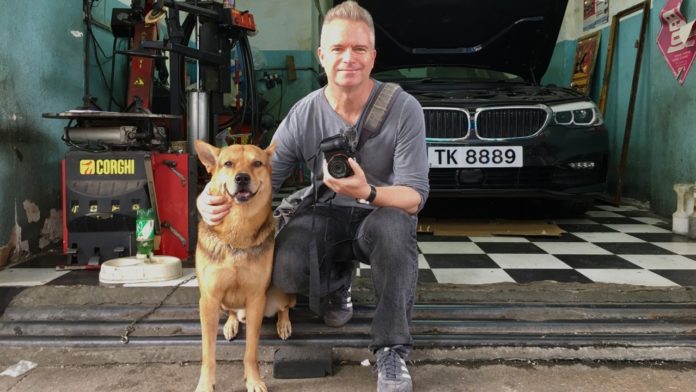 It’s obvious Marcel Heijnen has a loving relationship with Tung Tung, one of the “models” featured in the Dutch photographer’s latest book. As soon as Tung Tung spots Heijnen in a backstreet in Jordan, Kowloon, he pounces on him, showering him with slobbery kisses.

“He was one of my favourite dogs to photograph,” says Heijnen, who has a background in graphic design. “So easy to work with and so affectionate.”

Tung Tung, eight, who was adopted by Mr Pon after the street dog was found in a public toilet near the Jordan garage he now calls home, features in Hong Kong Garage Dogs – a book showcasing a collection of images that will be launched at G.O.D, in PMQ, Central, on November 29.

Many in Hong Kong will be familiar with Heijnen’s 2016 book, Hong Kong Shop Cats, for which he turned the lens on felines living mostly among the dried-seafood stores in the Sai Ying Pun neighbourhood, where he lives.

Heijnen’s light-bulb moment, when he had the idea for photographing garage dogs, the third in his “Chinese Whiskers” series, which also includes Hong Kong Market Cats , came when he spotted Shu Shu – the book’s cover dog – while wandering through the Chai Wan industrial area, at the eastern end of Hong Kong Island.

“I started scouting car-repair areas, from Shau Kei Wan to To Kwa Wan and from Tai Kok Tsui to Kam Tin, to look for photogenic canines,” he says.

The garages are the home turf not only of the mechanics and shopkeepers but also of the dogs who live in the chaotic spaces crammed with car parts, stacked tyres and petrol cans, the air heavy with the smell of oil. And the canines’ roles as companions are just as important as their guard duties.

Twinkle the pug, another dog featured in the book, is asleep in a cardboard box, in a Kowloon garage. She’s feeling a bit under the weather.

Her owner, Mr Chong, adopted her 12 years ago, when he worked for a pet hotel, where the dog was dumped.

It’s hard to pick a favourite image from the book, although one of the most arresting shows a dog in front of a 1930s Bentley.

“I love the symbolism of the old luxury British car juxtaposed with the messy garage,” Heijnen says.

Hong Kong Garage Dogs is more than just a picture book; it shows the relationships the dogs have formed in their “’hoods” and gave Heijnen another chance to explore Hong Kong’s “beautiful organic chaos”.

The fun three-line captions, by Singaporean Grace Chia, are in haiku style, a traditional form of Japanese poetry.

Hong Kong Garage Dogs, as well as two calendars and an exhibition, will be launched on November 29 at G. O. D, PMQ, 35 Aberdeen Street, Central, tel: 2915 2822, with 10 per cent of calendar-sale proceeds going to the Lifelong Animal Protection Charity.