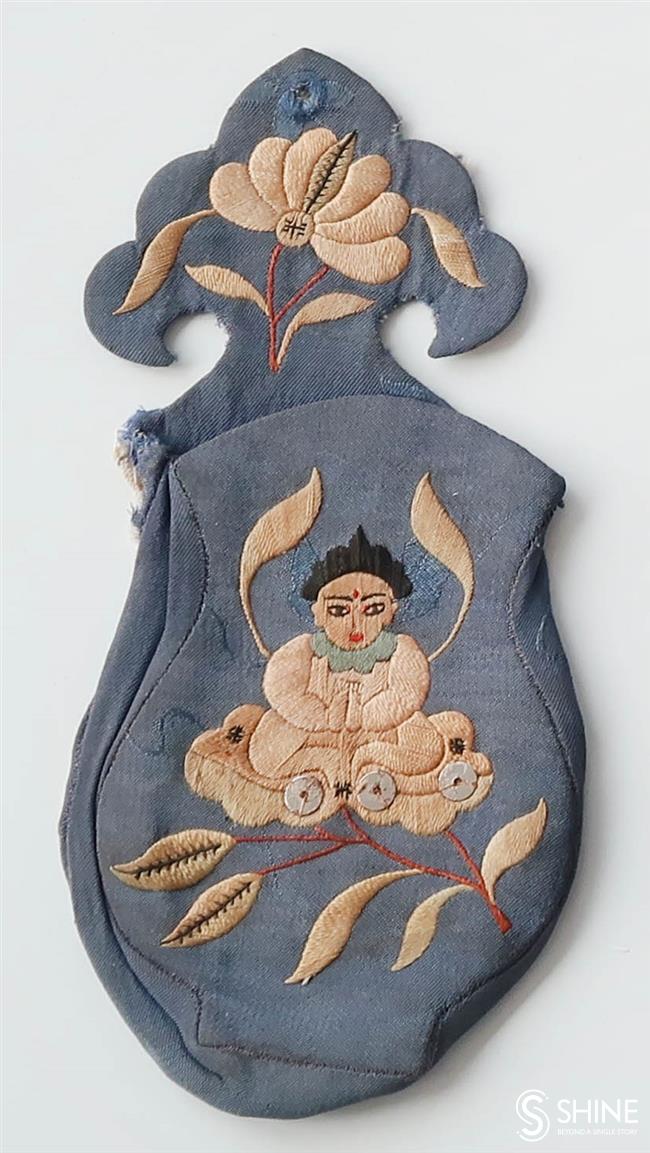 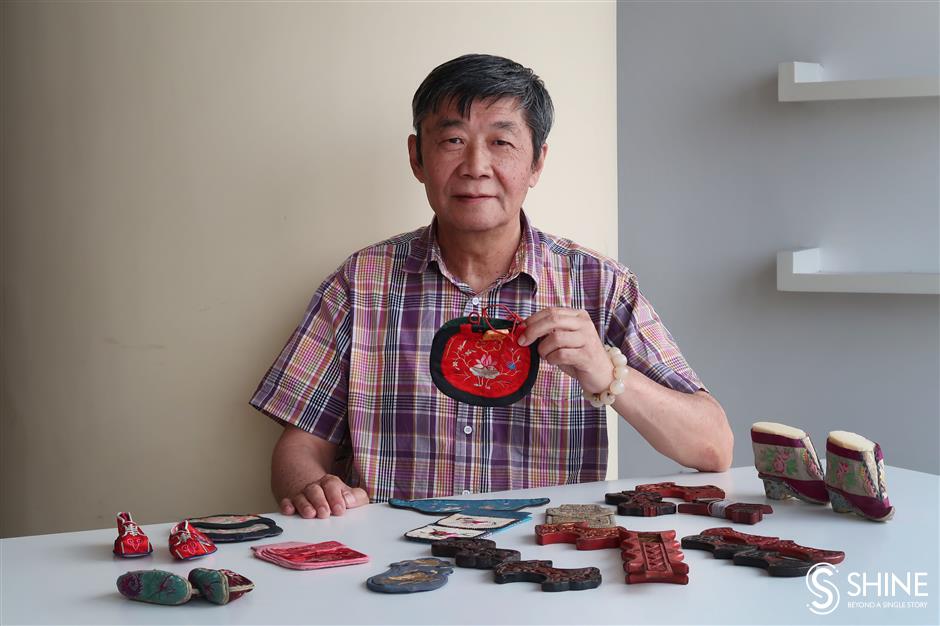 Gao Naixing, 66, is a collector of needlework and its related tools.

In ancient China, almost every woman was good at needlework. Passed down from generation to generation, their skills were a significant part of family life in the days before electricity.

Gao Naixing, 66, collects antique needlework. He is a member of Shanghai Collection Association. The retiree came to love the women’s art in the 1990s, when he inherited his grandmother’s handicrafts after her death.

“In China, there is a funeral etiquette that says all the belongings of the deceased need to be burned,” Gao says. “Following tradition, my family members wanted to burn all her handiwork. I succeeded in keeping only a few things.”

It was not only his grandmother’s elegant craftsmanship that drove him to preserve these heirlooms, but, more importantly, the childhood memories of time spent with her.

“Her legacies always remind me of the afternoons when my grandmother sat on a small stool in the lane and did needlework along with other elderly women,” Gao says. “They chit-chatted while we children played alongside.” 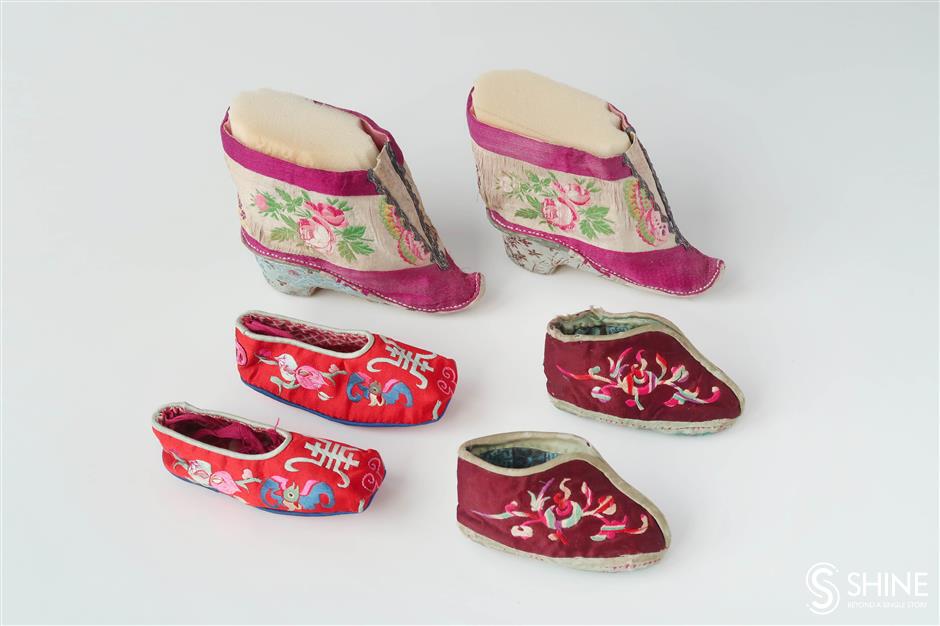 The shoes handmade by Gao’s grandmother

He shows me three pairs of shoes handmade by his grandmother, one belonging to her and two probably once worn by Gao’s brothers when they were young. The shoes all appear to be the same size.

“My grandmother bound her feet when she was very young,” Gao explains. “After the founding of the People’s Republic of China in 1949, she stopped the practice, but her feet were much smaller than ours. She made all the lotus shoes in the size of about 20 by herself.”

Gao shows me a pair of exquisite lotus shoes embroidered with butterflies and flowers. They were made in the late Qing Dynasty (1644-1911). Made of silk, the tiny shoes are in the shape of cone. Like today’s high-heeled shoes, her lotus shoes were also designed with heels made of wood and covered with delicate aqua blue silk.

According to Gao, the shoes might be made for indoor wear because the soles are also decorated with flowers.

Both of the children’s shoes were made of red silk. A bright red pair is embroidered with bats, symbolizing fortune in Chinese culture, and the Chinese character for shou, or “longevity.” The shoes are suitable for the children at the ages of 1 or 2. Another claret-colored pair, smaller and shabbier, might have been worn by Gao’s brothers when they were only 6 months old.

“The new shoes and the new clothes that we grandchildren wore every Chinese New Year were all made by our grandmother,” he says. “The needlework was woven with her love.” 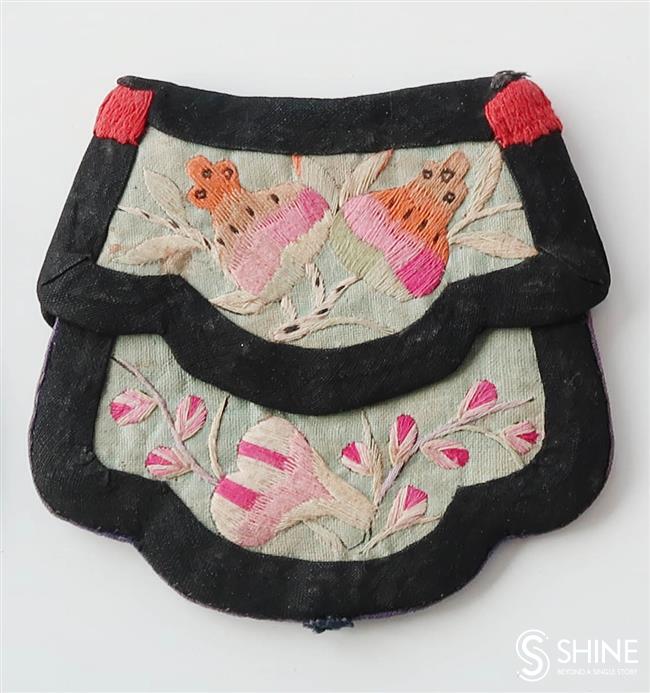 A northern Chinese purse is embroidered with pomegranates symbolizing fertility.

Gao also collects antique purses. He has about 80 of them from different areas of China.

The silk small bags are often adorned with the patterns with auspicious meanings, such as pomegranates symbolizing fertility, lotus flowers meaning purity, bamboo representing strength and magpies signifying happiness. The purses come in different shapes — round and rectangular, gourds and butterflies. Gao says the knick-knacks once were love tokens sent by girls to boys they liked.

Among the numerous purses, Gao says his favorite is a black and red one embroidered with lotus flowers and roots, symbolizing purity and integrity. It was made in the late Qing Dynasty.

“I found this treasure in the Yuyuan Garden about 20 years ago,” he says. “There was a curio market on Fuyou Road. I paid 40 yuan (US$5.80) for the purse, which made me feel excited for a whole week.”

To add to his collection, Gao prowls through curio markets in Shanghai. He recalls the “ghost markets” that opened at 2am. Gao used to take an overnight bus to the markets, carrying a flashlight with him.

“I sometimes went to the markets on foot,” he says. “I was living on Yangshupu Road in Yangpu District back then. It took me an hour and a half to get to Yuyuan, which was 10 kilometers from my home.” 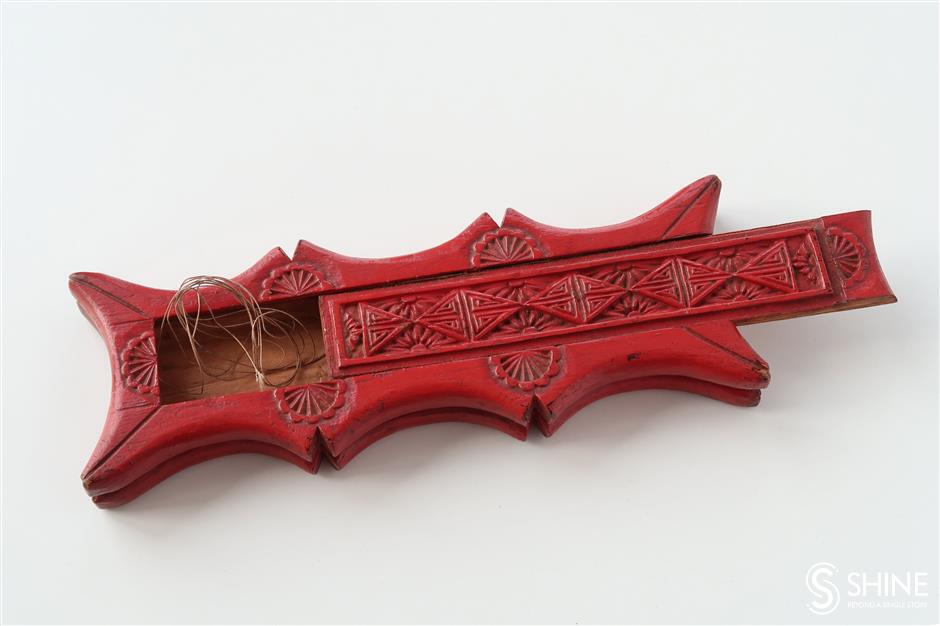 The antique wooden board was used to wrap and store threads.

Apart from needlework, Gao also collects the tools of the trade, such as scissors, irons and wooden boards that were used to wrap threads.

Gao has over 100 wrapping boards made from the wood of camphor, peach and pear trees. The earliest ones date back to the Ming Dynasty (1368-1644).

“Needlework and its related tools are a very niche type of collection,” he tells me. “Few people are concerned with the things I collect. Because of that, if I don’t preserve them, nobody will. My greatest wish is to have an exhibition space displaying all my collection.”

Standing up suddenly, he shows me his idea about the layout of such an exhibition room. It seems he has spent a long time working on his dream.